Having a can of Diet Coke every day could raise your risk of heart attacks, science suggests.

Experts found people who consume just 78mg/day, similar to what is found in half a can of diet fizzy pop, were up to a tenth more likely to suffer a heart attack.

They were also a fifth more likely to suffer a stroke, the study found.

In a frank warning to the public, French academics concluded they should not be considered a safe alternative to sugar.

The decade-long trial of 100,000 people, published in the British Medical Journal, adds to a growing pile of evidence suggesting that sweeteners may harm health.

However, independent experts warned that the link between the sugar substitutes and heart problems are overstated — while the known dangers of sugar itself are clear.

They said it won’t be possible to reach a conclusion on artificial sweeteners without larger and longer-term studies.

A team of French researchers studied the eating habits of more than 100,000 people, including how much of the food additive was in their diet. The findings, published in the British Medical Journal , show that those with the most in their diet — equivalent to half a can of a diet drink per day — were a tenth more likely to suffer heart disease 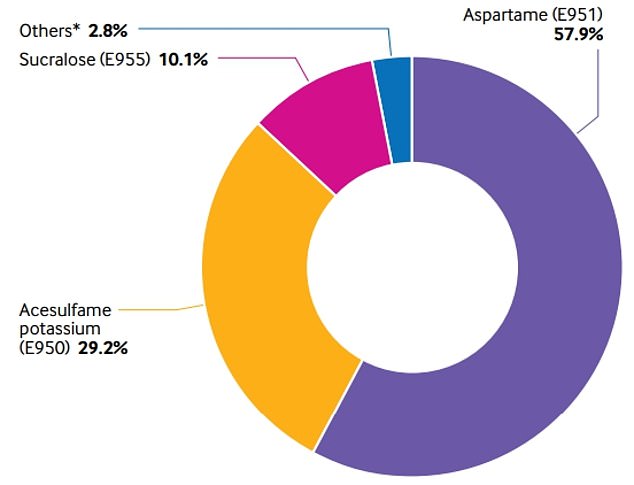 Researchers at the French National Institute for Health and Medical Research in Paris examined nutrition data on 103,388 people, including everything they consumed within 24 hours. The graph shows how much each artificial sweetener contributed to the average person’s intake of the food additive. Aspartame accounted for more than half of the artificial sugar in the average person’s diet, while sucralose accounted for a tenth of the intake 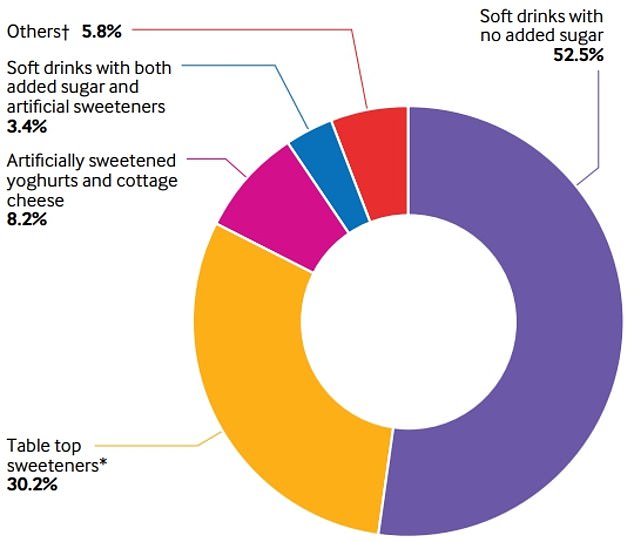 The analysis of nutrition data revealed diet soft drinks contributed to half of a person’s artificial sugar intake, while table top sweeteners made up 30 per cent of intake and artificially sweetened dairy products added just under a tenth of artificial sugar to a person’s diet

WHAT ARE ARTIFICIAL SWEETENERS?

Artificial sweeteners are low-calorie or calorie-free chemical substances used instead of sugar to sweeten foods and drinks.

They’re found in thousands of products, from drinks, desserts and ready meals, to cakes, chewing gum and toothpaste.

Popular sweeteners approved for use in the UK include aspartame, sucralose and stevia.

Both Cancer Research UK and the US National Cancer Institute have said sweeteners do not cause cancer.

And all sweeteners in the undergo strict safety tests before they can be used in food and drink.

However, studies have suggested sweeteners can stimulate appetite and therefore increase the risk of weight gain and obesity.

Artificial sweeteners are a key ingredient in thousands of food and drink products, with manufacturers using them to push out low or no calorie versions.

Dozens of studies have already spotted a link between sweeteners and weight gain.

Other research has linked over-consumption to high blood pressure and inflammation, which itself is linked to a plethora of medical woes.

However, findings have so far been mixed on whether the food additive is behind illnesses such as cardiovascular disease.

To get to the bottom of this, researchers at the French National Institute for Health and Medical Research examined data on 103,388 people.

Participants, aged 42 on average, logged everything they ate for three days.

This meant artificial sweetener consumption could be broken down by product — including drinks, table top sweetener and dairy — and by type, such as aspartame, acesulfame and sucralose.

The team then compared this against medical records, allowing them to look for a link to heart attacks and strokes.

Results showed 37 per cent of the group included the food additive in their diet, among who the average daily intake was 42.5mg — around one individual packet of table top sweetener or 100ml of a diet drink.

Those who consumed artificial sweeteners tended to be younger and fatter than those who didn’t.

They were also more likely to smoke, be less active, follow a diet and eat more salt, red and processed meat, dairy and diet drinks.

All of the factors, except for being younger, are thought to raise the rise of heart issues, which may have skewed the results.

The experts claimed they took this into account, however.

Over the nine-year study, there were 1,502 heart attacks, strokes, cases of angina — chest pain due to reduced blood flow to the heart — and angioplasties — a procedure to widen blocked arteries.

The team found that the those who consumed the most artificial sweeteners were nine per cent more likely to suffer from cardiovascular disease.

The biggest artificial sweetener consumers had 77.6mg per day — the equivalent of 180ml of fizzy drinks.

This group was also 18 per cent more likely to suffer cerebrovascular disease — conditions which affect the blood flow to the brain, like a stroke.

Aspartame, found in sugar-free drinks, ice cream and salad dressing, was linked to the biggest risk of stroke.

The researchers admitted that their study is observational, so doesn’t prove artificial sweeteners raise the risk of cardiovascular problems.

But they note the study used ‘precise’ and ‘high-quality’ data.

Writing in the journal, the team said there appeared to be ‘no benefit’ on heart health by swapping sugar for artificial sweeteners.

‘The findings indicate these food additives, consumed daily by millions of people and present in thousands of foods and beverages, should not be considered a healthy and safe alternative to sugar, in line with the current position of several health agencies.’

However, experts pointed out flaws in the conclusions.

Professor Naveed Sattar, an expert in cardiovascular disease at the University of Glasgow, warned the ‘major differences’ in health between those consuming the food additives and those who do not means it is impossible to get to determine what role it plays.

He said the researchers suggested ‘far too strongly’ that artificial sweeteners could be behind poor heart health when its observational evidence is ‘weak and potentially flawed’.

Studies looking at the effect of artificial sweeteners on health have been ‘contradictory’ and it is not possible to reach a conclusion without a long-term and large randomised trial, Professor Sattar added.

However, studies have suggested sweeteners can stimulate appetite and therefore potentially increase the risk of weight gain and obesity.

And the same team of French researchers, who work on behalf of President Emmanuel Macron’s Government, earlier this year found that sweeteners may increase the risk of cancer.

They monitored the diet and health of 100,000 people over eight years. Those who regularly consumed artificial sweeteners were 13 per cent more likely to receive a cancer diagnosis.

However, both Cancer Research UK and the US National Cancer Institute have said there’s no proof sweeteners cause cancer.