Mikel Arteta insists Arsenal will still require ‘almost perfection’ to win the Premier League title – despite Sunday’s derby victory over rivals Tottenham taking them eight points clear at the top of the table.

An own goal from Hugo Lloris and a long-range effort from Martin Odegaard gave Arsenal their first victory at the Tottenham Hotspur Stadium – and their first league win at Spurs since 2014.

It means, after Manchester City’s defeat at rivals United, Arsenal extended their lead atop the table as they chase a first title since the 2003/04 Invincibles.

But five of the past six champions have surpassed 90 points and Arteta expects Arsenal to have to match that haul.

Arsenal are currently on course for 99 points, having taken 47 points from 18 matches.

‘It will demand almost perfection,’ Arteta said. ‘It’s a great position to be in. Let’s enjoy the moment and keep focusing. 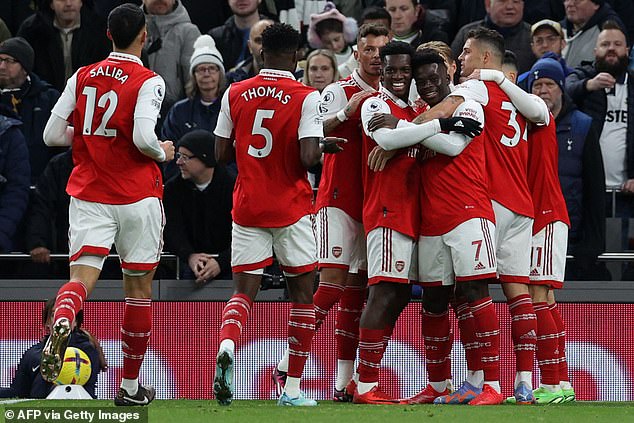 ‘The enjoyment is going to come if we keep focusing on what we have to do… I don’t want to do too much calculation, it’s just how we’re going to prepare Manchester United and play well to win.’

‘This obviously has a big emotional attachment because obviously there is a big history between the two clubs and it means so much for our people to win this game,’ he said.

‘Going in the dressing room and just feeling the joy and the togetherness around the team and how much it meant for them is special. 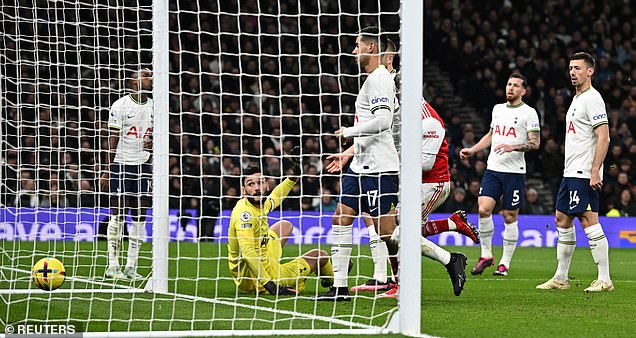 ‘We must not forget that because tomorrow we have to do the same and we have to do exactly the same to carry on the form that we have at the moment.’

Spurs boss Antonio Conte conceded that Arsenal’s performance proved why they are top of the table. His side now sit five points off the top four having played a game more – and 14 behind their rivals.

Conte backed goalkeeper Lloris, despite the captain throwing Bukayo Saka’s cross into his own net. It was the goalkeeper’s second error already this month. 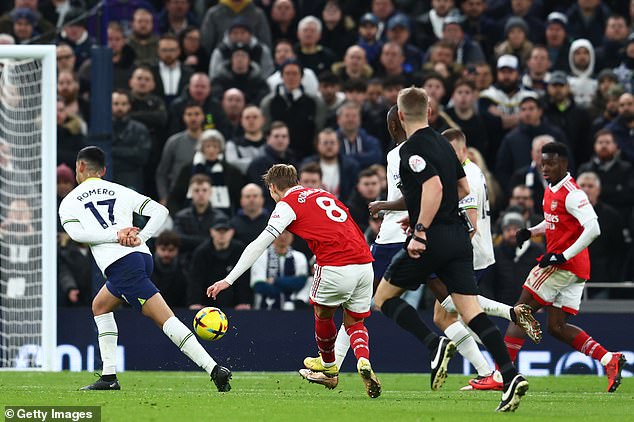 ‘Honestly I consider Hugo one of the best keepers in the world and it can happen,’ the manager said.

‘Sometimes you can make a mistake. For sure when there is the mistake of the keeper it is more visible. Hugo for us is a one of the players who is really important for the dressing room, for his personality because we are talking about a player who is one of the best keepers in the world.’

Conte added: ‘About the performance, I’m not disappointed. We knew the game could be really difficult because Arsenal are a really strong team and they showed why they deserve to be top of the league. They deserve to be title contenders. In my opinion, Arsenal and City are the two teams that can fight for the title.