Arsenal boss Mikel Arteta has revealed TV show Ted Lasso has helped him through ‘difficult moments’ as a football manager.

The Spaniard who was appointed at the Gunners back in December 2019, has been through some tough periods as manager of the club including the start of the new season.

Arteta has revealed that he has been binging the American TV series and taking inspiration from the soccer coach.

Ahead of the game at Burnley he said: ‘The last one (series) I watched, and I’m now watching the new episodes, is Ted Lasso. It’s been great.

‘It’s been great in tough, difficult moments. He’s always smiling and always believing and it gives you a different perspective that there is not one way of looking at things.

‘There are positives and negatives and there are people that manage in a really successful way to do it differently. Thanks Ted, you’ve been brilliant.’

‘Ted Lasso’, was released in 2020 on Apple TV, and follows an American football coach who comes over to manage in England.

The character is played by Jason Sudeikis and in the show Lasso is widely mocked on his arrival at AFC Richmond for his lack of football knowledge before he goes on to earn to the respect of the players.

Arteta’s spell at Arsenal had a promising start after winning the FA Cup at the end of his first season.

The Gunners though failed to qualify for Europe last season after finishing 8th in the final Premier League table.

Arteta is under pressure after a tough start to the new season with defeats against Brentford, Chelsea and Manchester City before they took their first win of the campaign against bottom of the league Norwich. 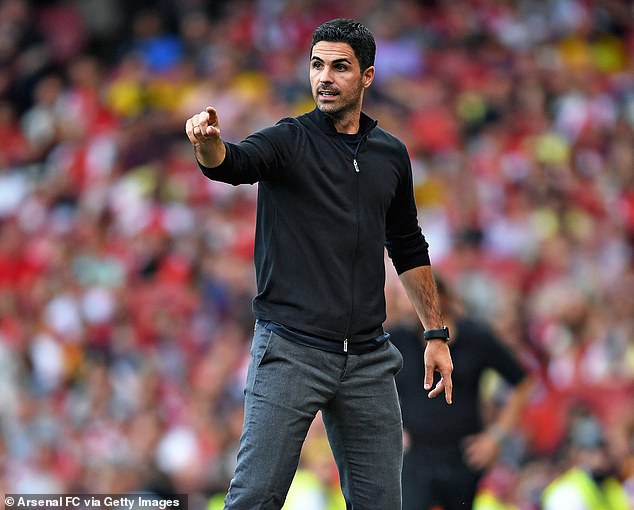