Arlene Foster has announced she is resigning as DUP leader and First Minister of Northern Ireland after an internal party revolt over her handling of Brexit.

Mrs Foster said in a statement published this afternoon that she intends to step down as DUP leader on May 28 and will then quit as First Minister at the end of June.

She said it has been the ‘privilege of my life to serve the people of Northern Ireland as their First Minister’ as she brings the curtain down on her five and a half year tenure as DUP leader.

The 50-year-old Fermanagh and South Tyrone representative also indicated her resignation will mark the end of her political career, as she said she was preparing to ‘depart the political stage’.

Mrs Foster’s decision to step down comes after reports that three quarters of the DUP’s Northern Ireland Assembly members had signed a letter of no confidence in her leadership, with at least half of the party’s MPs in Westminster said to have followed suit.

It was claimed that 21 MLAs, four MPs and at least one peer had signed the letter.

DUP leadership contests are restricted to the party’s MLAs and MPs, and with 27 MLAs and eight MPs currently in office, the reported scale of opposition would have left Mrs Foster with no chance of winning a vote should she have tried to cling on.

Arlene Foster, pictured yesterday during a visit to a youth centre in Belfast, this afternoon announced she is stepping down as DUP leader and First Minister of Northern Ireland 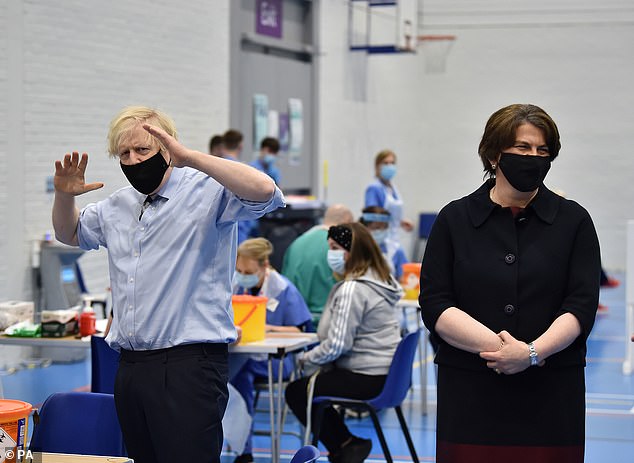 Mrs Foster used her resignation statement to criticise Boris Johnson’s Brexit deal. She said the Northern Ireland Protocol ‘foisted upon Northern Ireland against the will of unionists has served to destabilise Northern Ireland in more recent times’. The pair are pictured together during a visit to Enniskillen in March this year

Who could replace Arlene Foster as DUP leader?

Arlene Foster’s resignation has fired the starting pistol on the leadership race to succeed her.

Here are some of the names previously tipped for the DUP top job:

The DUP’s chief whip in Westminster, Sir Jeffrey played a crucial role when the party agreed to a Confidence and Supply arrangement with Theresa May’s government following the 2017 general election.

He is the party’s longest serving MP, having represented Lagan Valley since 1997 and has been group leader since the 2019 general election when Nigel Dodds lost his seat.

Currently serving as Stormont’s Agriculture Minister, Mr Poots has been a vocal critic of the Northern Ireland Protocol.

He claimed post-Brexit checks on goods are negatively affecting the region’s agri-food sector.

The MLA for Lagan Valley briefly took time off from his role earlier this year to undergo cancer surgery.

The current MP for Belfast East, Mr Robinson would be the party’s youngest ever leader at the age of just 36.

His election as leader would likely signal an attempt by the DUP to broaden its voter base and to appeal more to younger voters.

He was first elected to Westminster in 2015 and currently serves as the party’s defence spokesman.

Lord Dodds was made a peer after he lost his Belfast North seat at the 2019 general election.

He had served as the party’s leader in Westminster and played a crucial role, along with Sir Jeffrey, in the DUP forming an alliance with Mrs May’s government.

Mrs Foster said in a statement: ‘A short time ago I called the Party Chairman to inform him that I intend to step down as leader of the Democratic Unionist Party on the twenty-eighth of May and as First Minister of Northern Ireland at the end of June.

‘It is important to give space over the next few weeks for the Party Officers to make arrangements for the election of a new leader. When elected I will work with the new leader on transition arrangements.

‘As First Minister it is important that I complete work on a number of important issues for Northern Ireland alongside other Executive colleagues.

‘Northern Ireland and its people have been heavily impacted by the Covid-19 pandemic and there remains more work to be done to steer us thorough the pandemic and to lessen its impact on the lives of everyone.

‘It has been the privilege of my life to serve the people of Northern Ireland as their First Minister and to represent my home constituency of Fermanagh/South Tyrone.’

Mrs Foster said that as she ‘departs the political stage’ it is her view that ‘if Northern Ireland is to prosper then it will only do so built on the foundations of successful and durable devolution’.

She said she would be the ‘first to recognise there have been ups and downs over the last five and a half years’.

She said the DUP’s confidence and supply agreement with Theresa May’s Conservative government in the wake of the 2017 general election ‘was able to bring one billion pounds of extra spending for everyone in Northern Ireland’.

She said: ‘For almost five and a half years I have been incredibly humbled to have the opportunity to lead the Democratic Unionist Party.

‘I have sought to lead the Party and Northern Ireland away from division and towards a better path.

‘The future of unionism and Northern Ireland will not be found in division, it will only be found in sharing this place we all are privileged to call home.’

Northern Ireland Secretary Brandon Lewis paid tribute to Mrs Foster as he described her as a ‘truly dedicated public servant’.

He tweeted: ‘There are many young people, particularly young women, who will be inspired by her example to follow a path into politics.

‘I wish her all the best and look forward to continuing to work with her in the days and weeks ahead, delivering for all the people of NI.’ 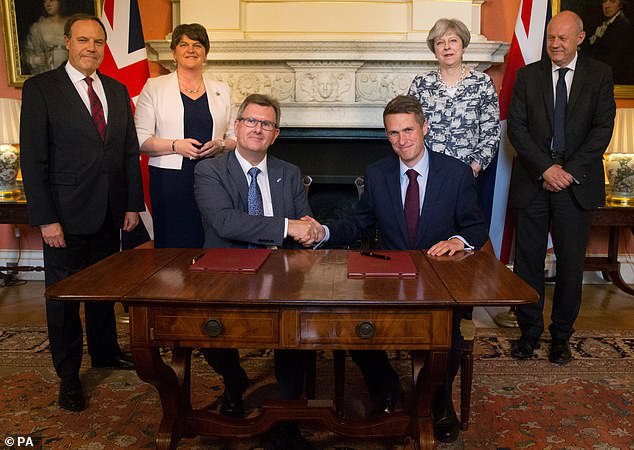 Mrs Foster had only yesterday dismissed suggestions that her leadership of the party was in jeopardy.

She said that ‘these stories come up from time to time’ and she intended to ‘deal with it and move on’.

But party sources had insisted that they believed she would have no choice but to resign given the scale of the internal party backlash at her handling of Brexit.

The DUP has been facing anger from the wider loyalist and unionist community over the rollout of the Northern Ireland Protocol which critics argue has created an economic and trade border in the Irish Sea between Northern Ireland and the rest of the UK.

Critics have accused Mrs Foster of failing to use the party’s influence in Westminster – particularly during its confidence and supply deal with the Conservatives – to secure a Brexit deal that saw Northern Ireland leave the EU on the same terms as the rest of the UK.

Poor polling numbers have exacerbated the discontent among the party faithful.