Private contractors prepared the draft report of the recount, obtained by the Washington Post, confirm President Joe Biden’s win in Maricopa County, Arizona. The finalized version is set to be released on Friday.

After almost six months and $6million spent – the majority handed out by those who casted down on the liberal’s win – the draft concluded 45,469 ballots were cast for Biden than for Trump in the county, according to the Washington Post.

Arizona counted all of Maricopa County’s ballots by handed, which included bizarre steps like scanning for bamboo fibers to investigate a claim the ballots were shipped into the state from Asia, according to Forbes.

The findings gave Biden another 360 votes over Trump.

The draft report concluded the count had ‘no substantial differences’ than the certified tally. 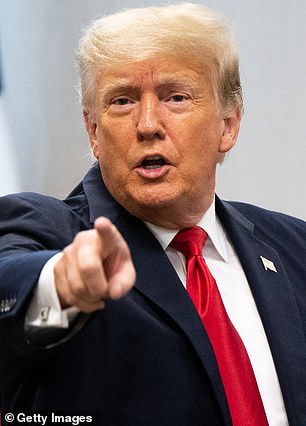 Arizona’s election audit found ‘no substantial differences’ after the draft report tallied 360 vote lead for Biden. The finalized report is set to release on Friday 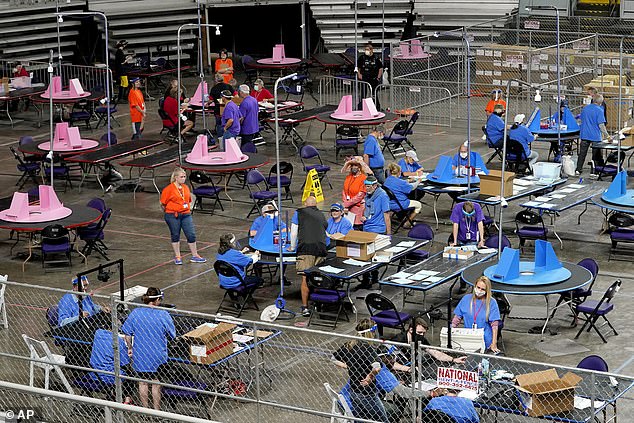 Private contractors (pictured) recounted the votes by hand in Arizona. The draft report was ‘close’ to the certified results

The report shuts down Trump’s unsubstantiated fraud claims, who claimed tabulating machines had miscounted paper ballots across several states or had been hacked.

Trump initially lost Arizona by about 10,000 votes. He and his allies alleged that fraud cost him the state.

Arizona Senate Republicans used their subpoena power to access to ballots, counting machines and electronic data in Maricopa County, home to about 60 percent of Arizona’s voters, for an audit.

However, the recount was criticized as chaotic: auditors searching for watermarks were told by state election officials the ballots were not watermarked; reports suggested they were also looking for traces of bamboo as evidence the papers were smuggled in from Asia. 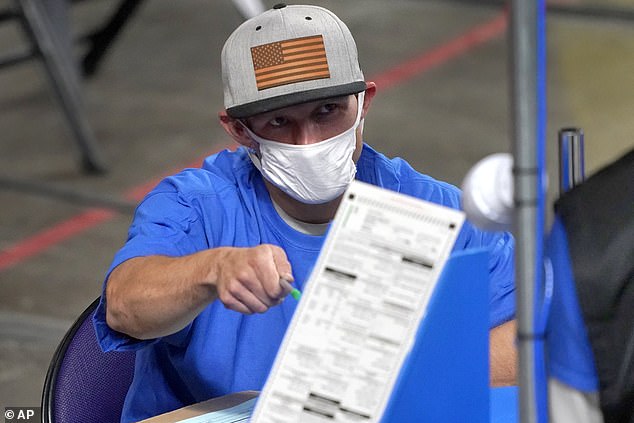 Maricopa County ballots cast in the 2020 general election are examined and recounted by contractors working for Florida-based company, Cyber Ninja,

Some of his most high-profile – and most controversial – supporters made a beeline for the Arizona recount to support the effort.

Reps. Marjorie Taylor Greene and Matt Gaetz stopped off on their America First tour in May. 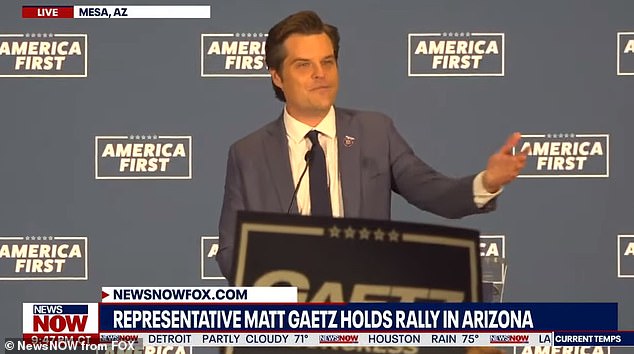 Rep. Matt Gaetz is one of the high-profile Republicans who has traveled to Arizona and called for its audit to be used for as a model for other disputed states

‘We are here in Arizona to stand in solidarity with the Arizona election audit,” Gaetz told a crowd of several hundred Trump supporters, adding that he hoped it would be the start of a bigger movement.

He said: ‘It’s my belief that Arizona will be the launch pad for elections audits and election integrity efforts all over this great country.’

Randy Pullen, a spokesperson for the ballot review, said the draft version was ‘close’ to the final report, but told the Washington Post there will be ‘updates in the final report.’

‘Was there massive fraud or anything? it doesn’t look like it,’ he told an NPR affiliate in Phoenix.

The document included a key warning of caution that further investigation is warranted, the Washington Post reported.

Maricopa County confirmed the audit results finalized Joe Biden’s win in the state, but reported ‘the report is also littered with errors’ about how Maricopa conducted their 2020 General Election

Maricopa County confirmed on Twitter the ‘General Election was accurate and the candidates certified as the winders did, in fact, win.’

It also warned that ‘the report is also littered with errors & faulty conclusions about how Maricopa conducted the 2020 General Election.’

Many Twitter users celebrated Biden ‘winning Arizona for the 11,789th time,’ with one user saying to ‘got my popcorn ready.’

Republican State Senate President Karen Fann led the campaign and publicly stated that the goal was not to revisit Biden’s win, but to look for ways to improve the state’s election laws.

Lawmakers subpoenaed a copy of Maricopa County’s ballots and voting machines, which were handed over to private contractors, according to the Washington Post.

In May, all seven of Maricopa’s elected officials, including five Republicans, called the review a ‘con’ and demanded the Senate end the review.

‘Our democracy is imperiled,’ they wrote in a letter to Fann. 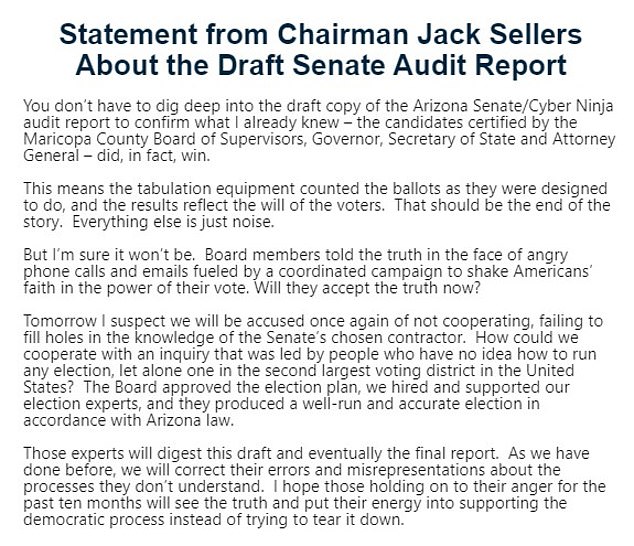 Maricopa’s County Board of Supervisors Chairman Jack Sellers (R) said the findings mean ‘the tabulation equipment counted the ballots as they were designed to do, and the results reflect the will of the voters. That should be the end of the story. Everything else is just noise’

Maricopa’s County Board of Supervisors Chairman Jack Sellers (R) said in a statement that the findings mean ‘the tabulation equipment counted the ballots as they were designed to do, and the results reflect the will of the voters. That should be the end of the story. Everything else is just noise,’ he told the Washington Post.

Trump allies are already downplaying the draft report, saying it is ‘only a partial report.’

Republican State Senator Wendy Rogers wrote on Twitter: ‘I just talked to Doug Logan via phone. The leaked draft is simply a draft and is only a partial report.

‘Tomorrow’s hearing will render findings of great consequence. Then he said “god is in control”. Please pray for our audit team tomorrow as they present their findings.’

Election experts are advising Arizona’s recount serve as a warning sign to other Republican legislators who have agreed to recount their ballots, the Washington Post reported.

Pennsylvania, Wisconsin, and Texas have all agreed to review their own 2020 election after responding to pressure from Trump.

‘Every time Trump and his supporters have been given a forum to make their case, they have swung and missed,” said Ben Ginsberg, a Republican election lawyer who has criticized Trump’s fraud claims.

‘If Trump and his supporters can’t prove it here — with the process they’ve designed — then they can’t prove it anywhere,’ he said in an organized call to reporters.

Trump sent a letter to Texas Republican Governor Greg Abbott on Thursday asking to ‘act now’ and issue a recount on the 2020 election ballots in the state.

The audited counties will include the major Democratic strongholds around Houston and Dallas, as well as Tarrant County, which for years has been the largest GOP-controlled county in Texas but went for President Joe Biden last year.

The former president, who won Texas in the election by 5.5 percentage points, did not make any specific allegations to back up his recount audit besides ‘I hear Texans want an election audit.’

‘Your citizens don’t trust the election system, and they want your leadership on this issue, which is the number one thing they care about,” Trump said in the letter to Abbott.

“Under existing Texas laws, the Secretary of State has the authority to conduct a full and comprehensive forensic audit of any election and has already begun the process in Texas’s two largest Democrat counties and two largest Republican counties,” a statement from the state read.

It went on to say the office expects the Legislature to provide funding for the audit. It was not clear who would conduct the review.