‘Mysterious’ pneumonia that has killed six in Argentina is ‘Legionnaire’s’: Riddle solved after fears of another Covid-style outbreak

Legionnaire’s disease is responsible for six deaths from a ‘mysterious’ pneumonia in Argentina, officials ruled today.

The situation in Tucuman, a small region 800 miles northwest of the capital Buenos Aires, sparked fear because of its similarities to the beginning of the Covid outbreak in the Chinese city of Wuhan.

Experts were concerned because Covid, influenza and hantavirus were all ruled out — raising the possibility that a never-before-seen pathogen had jumped from animals to humans.

But follow-up tests confirmed that all 11 of the sickened patients had tested positive for legionella.

The bacteria can lead to Legionnaire’s, a serious type of pneumonia which can prove deadly.

Victims so far include a 70-year-old woman who had gallbladder surgery and a 64-year-old man hospitalised with another illness.

An 81-year-old man in Tucaman was the latest to die from the previously unexplained disease, officials confirmed today.

Six people have died from a mystery pneumonia in Argentina, raising fears of a new viral outbreak (file image) 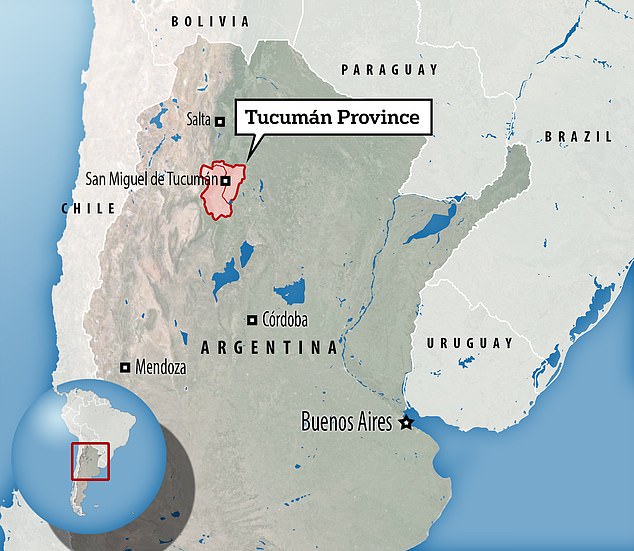 ARGENTINA OUTBREAK: WHAT DO WE KNOW?

What has happened? Eleven people in Argentina have been struck down with pneumonia, inflammation of tissue in the lungs.

Pneumonia is usually caused by a bacterial infection or a virus.

The Argentinian patients have tested negative for 30 common viruses, which raised concerns a new pathogen could be the culprit.

But health officials have confirmed all cases have tested positive for legionella, the bacteria behind Legionnaire’s disease.

Who is affected? At least eight health workers and one ICU patient have been infected, with the rest made up by other hospital patients.

A 70-year-old woman who was being treated at a private health clinic in Tucuman, a small region 800 miles northwest of the capital Buenos Aires, was the first to die on Monday.

The next fatalities were among two medics on Wednesday and Thursday and a 48-year-old man on Saturday.

Two infected people are still hospitalised, while three are having outpatient treatment with home monitoring.

Is it a concern? Western experts have said it is too soon to sound the alarm.

Legionnaire’s disease outbreaks are common and usually self-limiting because of how deadly the disease is.

And the bacteria behind the disease does not always cause deaths, often resulting in milder symptoms.

But the similarities to Covid’s origin and the brutal last two years of the pandemic raised concerns.

Reports of an unexplained pneumonia began to leak out of Wuhan, China, in December 2019.

All of the cases have been linked to the same cluster in a private health clinic in the north-western city of San Miguel de Tucuman.

Similar terminology was used in Wuhan in December 2019, in what later transpired to be Covid.

However, other experts argued that similar clusters occur frequently and tend to just ‘fizzle out’.

Two of the infected people are still hospitalised, while three are being monitored at home.

Twelve other patients at the clinic who were not struck down by the illness have been transferred to the Centro de Salud hospital in the same city.

Health authorities moved the patients as part of their contingency plan to avoid any further spread.

Speaking on Saturday, Argentinian health minister Carla Vizzotti said: ‘It has a more important impact on people with risk conditions.

‘[These include] those over 50 years of age, smokers or with some other chronic conditions such as diabetes or immunocompromise or respiratory diseases, which are the majority of cases that have had a fatal outcome.’

Legionella is usually spread through breathing in tiny droplets of water containing the responsible bacteria.

This is usually through air condition systems, hot tubs and humidifiers.

Hospitals, hotels and offices are places where it most commonly spreads.

Most cases of legionellosis — the umbrella term for diseases caused by the bacteria — do not kill, causing just fever, chills and a headache for two to five days.

But some can turn into deadly pneumonia, lung inflammation that can also cause muscle pain, diarrhoea and confusion.

This is what happens with legionnaire’s disease.

The outbreak in Argentina has caused the same symptoms.

Legionnaire’s, which can be treated with antibiotics, usually kills about 10 per cent of people it infects.