The renowned Arecibo Observatory radio telescope in Puerto Rico that has played a key role in astronomical discoveries for more than half a century has collapsed.

A cable holding up a 900-ton receiver platform snapped around 8am local time Tuesday morning and sent the massive structure hurling onto the reflector dish more than 400 feet below.

Arecibo Observatory suffered another failure in August when an auxiliary cable broke that resulted in a 100-foot gash on the 1,000-foot-wide dish and damaged the receiver platform that hung above it.

Then a main cable failed in early November that sealed the iconic telescope’s fate – officials were set to shut it down after 57 years of service.

Arecibo Observatory is famous for detecting whirling pulsars, capturing geological features of Mars and helping astronomers discover the near-Earth asteroid Bennu, along with making an appearance in the 1995 James Bond film GoldenEye.

The giant telescope was also used in programs that search for extraterrestrial intelligence (SETI) because its location provided scientists access to one-third of the cosmos.

The recent collapse has left many scientists stunned who had relied on what was until recently the largest radio telescope in the world. 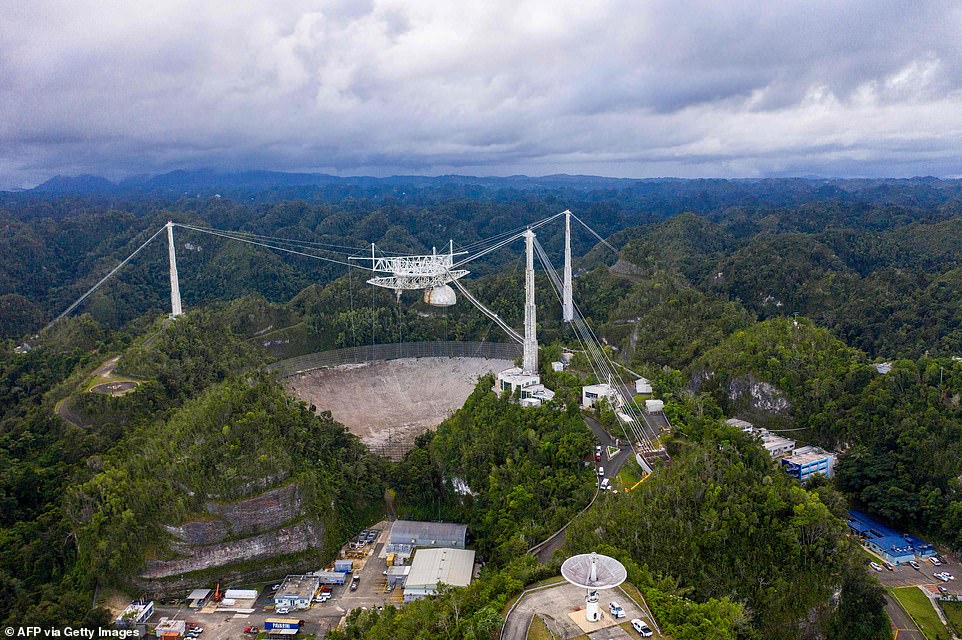 No one was near the dish when the platform collapsed, but officials have heard details on the event. They believe one of the remaining cables holding the platform to one of three support towers gave out due to the intense stress. Pictured is the telescope before that platform was dropped onto the reflector dish

‘It sounded like a rumble. I knew exactly what it was,’ said Jonathan Friedman, who worked for 26 years as a senior research associate at the observatory and still lives near it.

‘I was screaming. Personally, I was out of control…. I don’t have words to express it. It’s a very deep, terrible feeling.’

After hearing the distant roar, Friedman said he ran up a small hill near his home and saw a thick cloud of dust hanging over the location of the telescope – confirming his suspicions and greatest fear.

SETI Institute gave the telescope a personal farewell on November 20 when Arecibo was only set to be ‘taken apart and tucked away.’

Seth Shostak, Senior Astronomert, wrote: ‘Losing Arecibo is like losing a big brother. While life will continue, something powerful and profoundly wonderful is gone.’

No one was near the dish when the platform collapsed, but officials have heard details about the event. 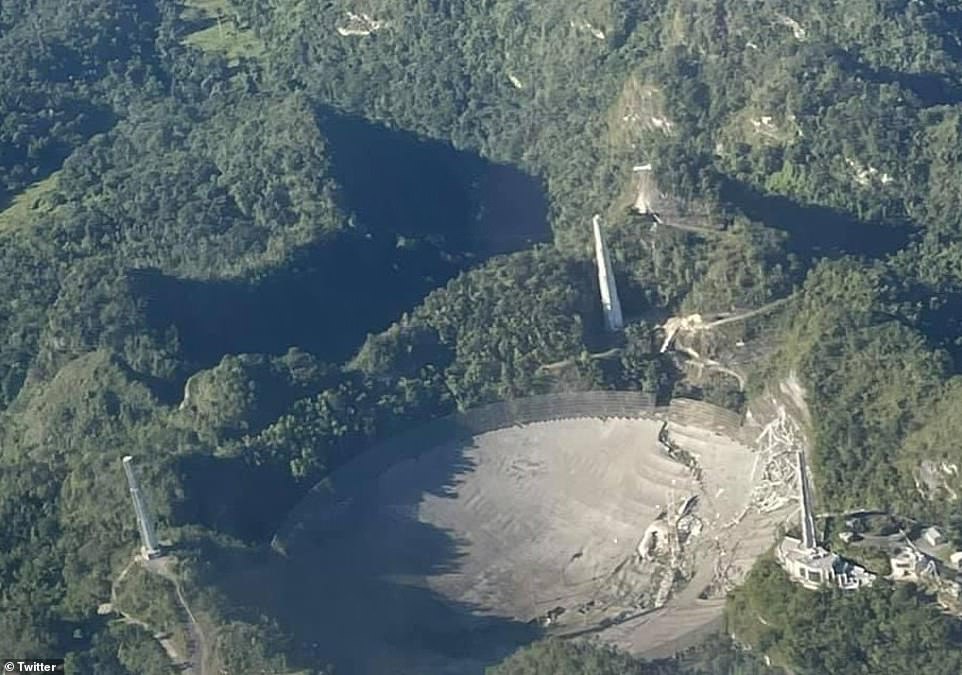 A cable holding up a 900-ton receiver platform snapped, which sent the massive hurling onto the reflector dish more than 400 feet below 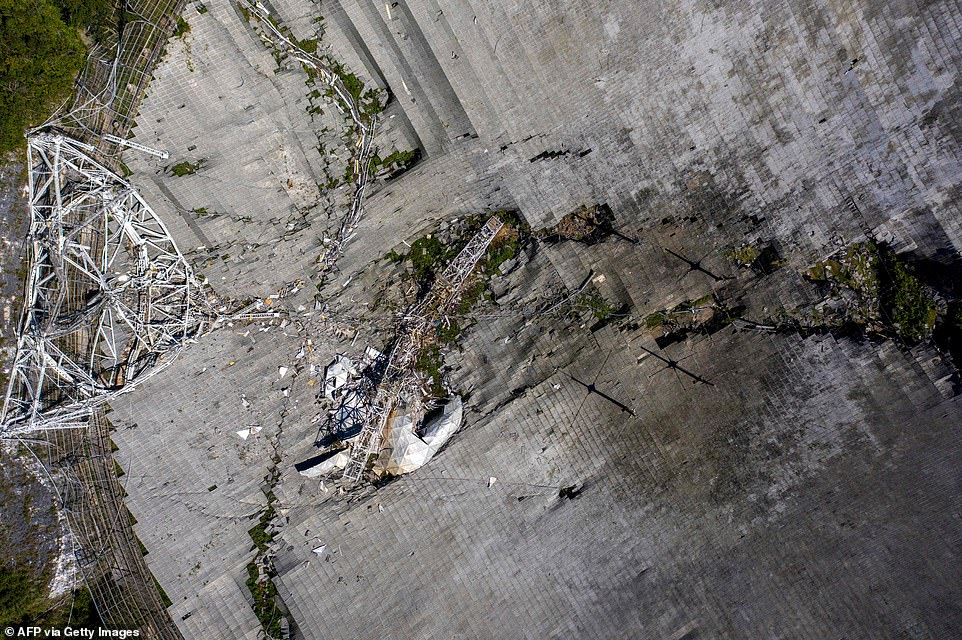 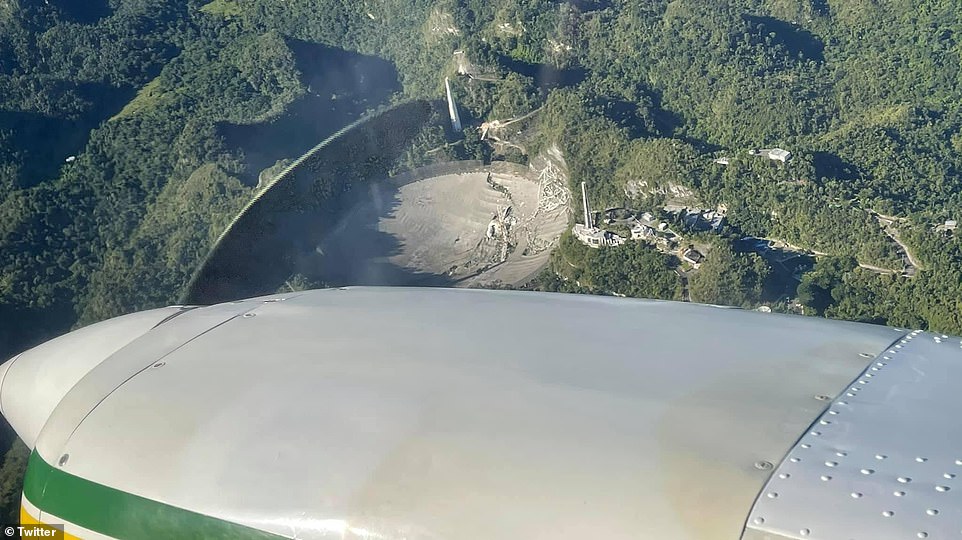 Scientists had feared the telescope would collapse in a week or two due to the mechanical issues this year. Pictured is an aerial view of the destruction 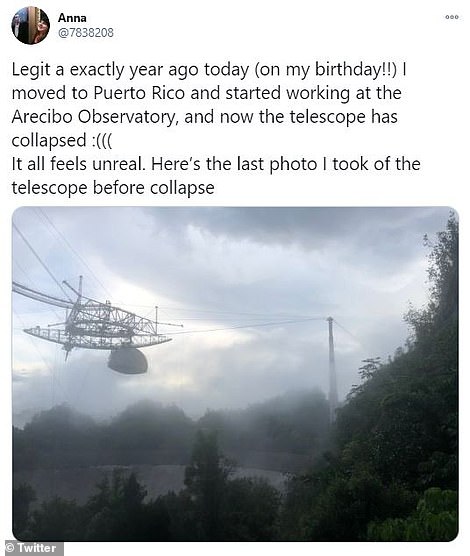 Then a main cable broke in early November sealing the iconic telescope’s fate. The recent collapse has left many scientists stunned who had relied on, what was until recently, the largest radio telescope in the world. Twitter users are also mourning the collapse and sharing images that show the thick smoke following the cable breaking 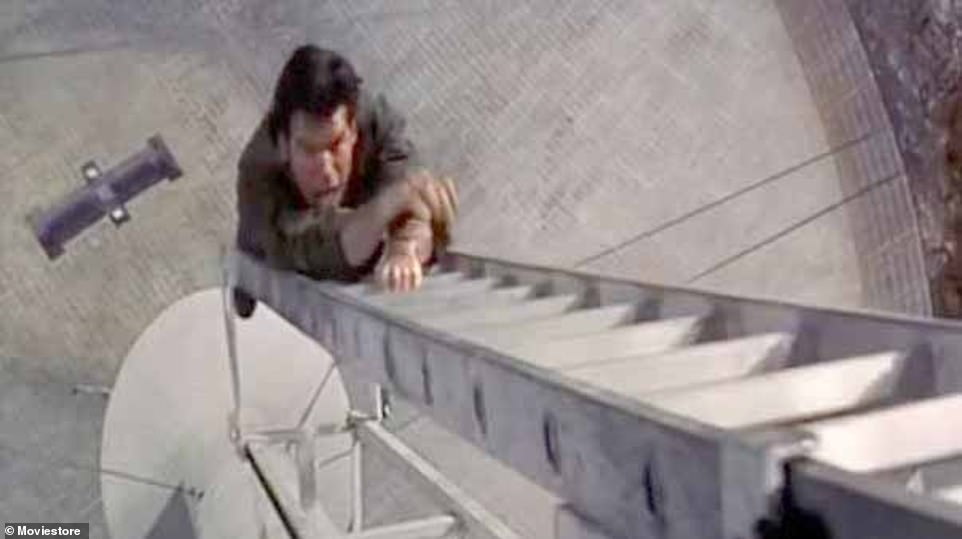 Along with identifying cosmic wonders, the Arecibo Observatory made an apperance in the 1995 James Bond film GoldenEye

Arecibo had endured hurricanes, tropical humidity and a recent string of earthquakes in its 57 years of operation, but it was mechanical failures that brought it down for good.

The telescope has been used to track asteroids on a path to Earth, conduct research that led to a Nobel Prize and determine if a planet is potentially habitable.

It has also served as a training ground for graduate students and drew about 90,000 visitors a year.

‘I am one of those students who visited it when young and got inspired,’ said Abel Méndez, a physics and astrobiology professor at the University of Puerto Rico at Arecibo who has used the telescope for research.

‘The world without the observatory loses, but Puerto Rico loses even more.’

Méndez last used the telescope on August 6, just days before a socket holding the auxiliary cable that snapped failed in what experts believe could be a manufacturing error. 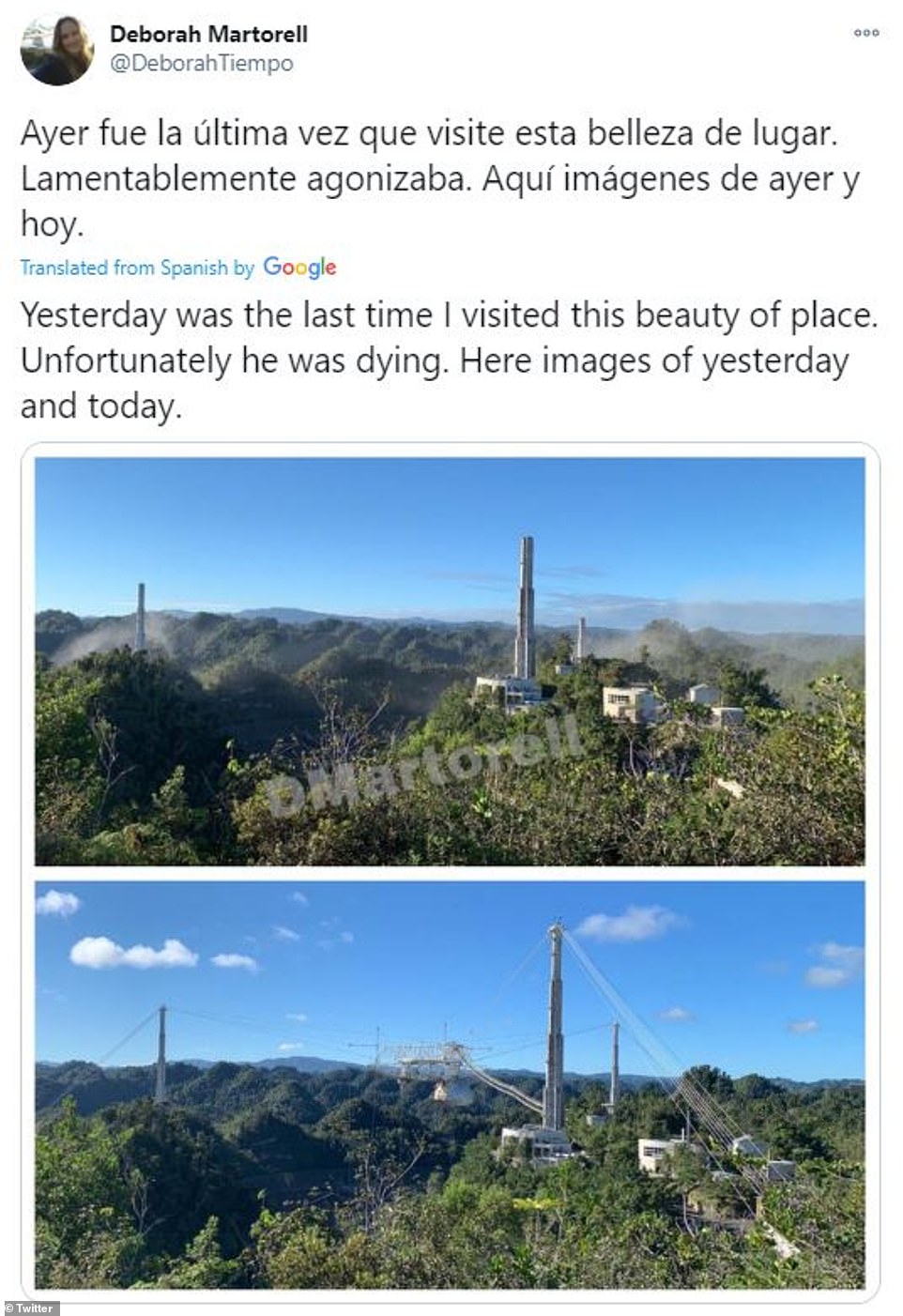 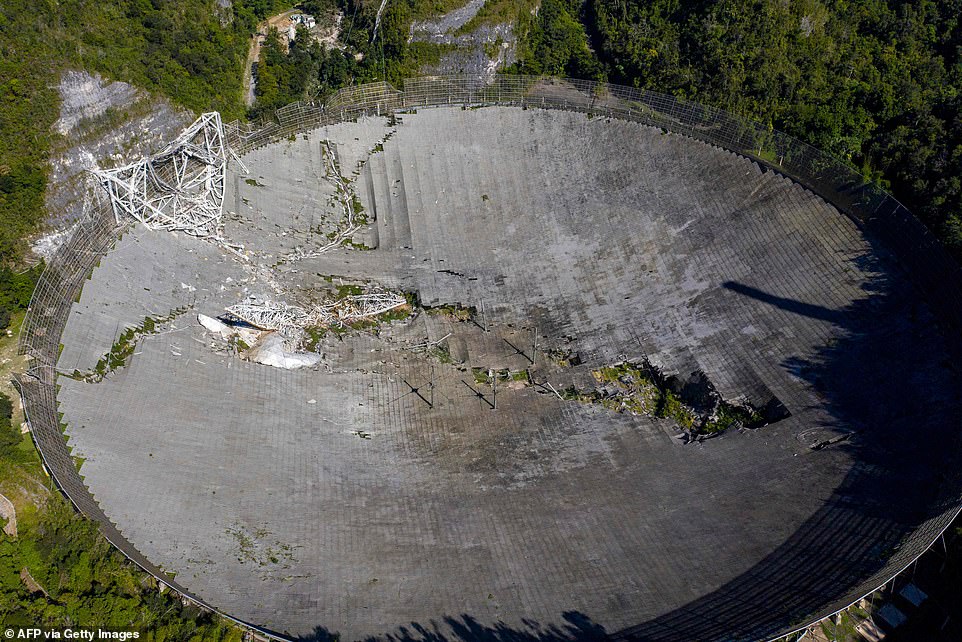 The NFS, which owns the observatory that is managed by the University of Central Florida, said crews who evaluated the structure after the first incident,  but determined that the remaining cables could handle the additional weight.

While the observatory was awaiting delivery of two replacement auxiliary cables, as well as two temporary cables, another main cable broke on the same tower on November 6.

This tore a new hole in the dish and damaged nearby cables, leading officials to warn that the entire structure could collapse.

‘Leadership at Arecibo Observatory and UCF did a commendable job addressing this situation, acting quickly and pursuing every possible option to save this incredible instrument,’ said Ralph Gaume, director of NSF’s Division of Astronomical Sciences.

‘In the end, a preponderance of data showed that we simply could not do this safely and that is a line we cannot cross.’

About 250 scientists worldwide had been using the observatory when it closed in August, including Méndez, who was studying stars to detect habitable planets.

‘I’m trying to recover,’ he said. ‘I am still very much affected.’ 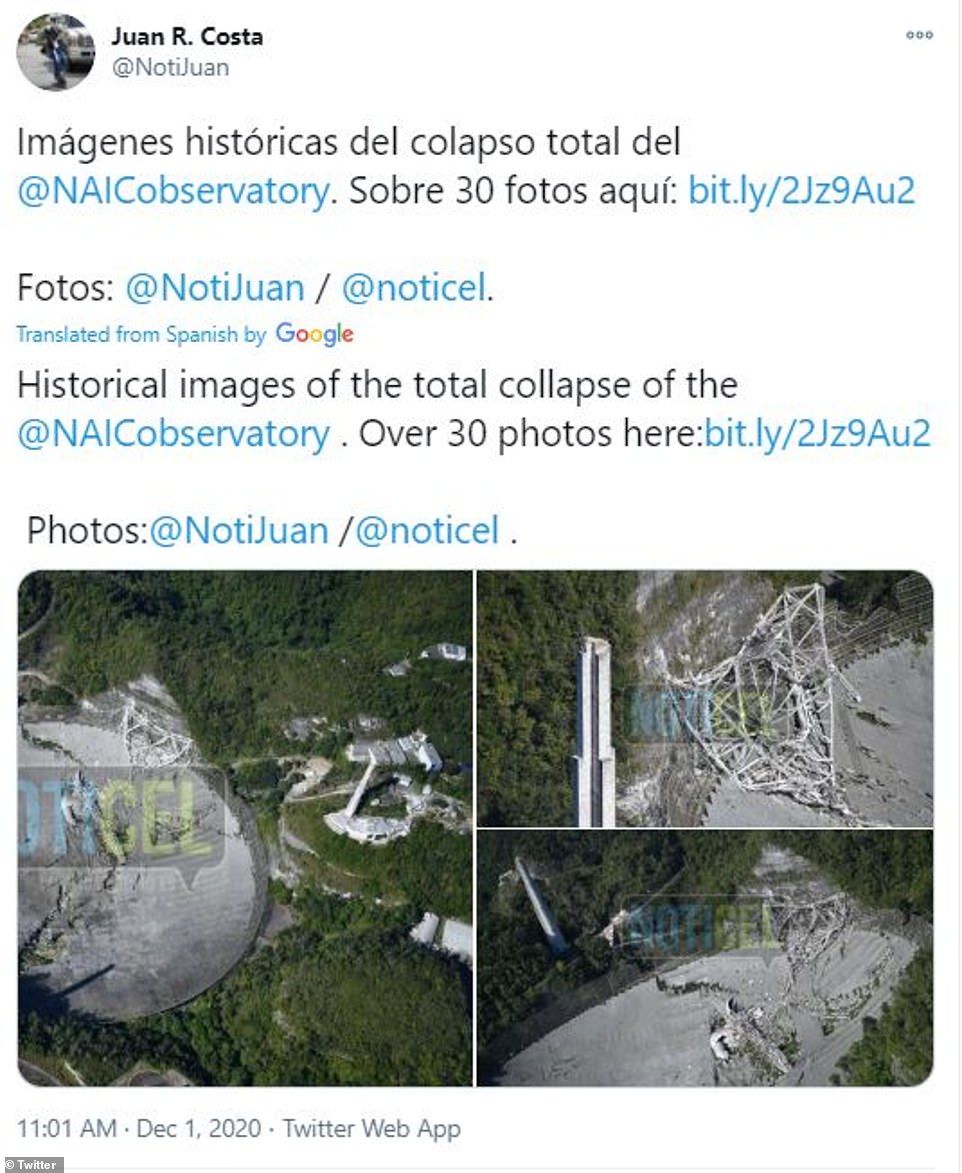 One of the telescope’s remaining cables snapped Tuesday morning. It was supporting a 900-ton platform that came crashing down on teh reflector dish 400 feet below 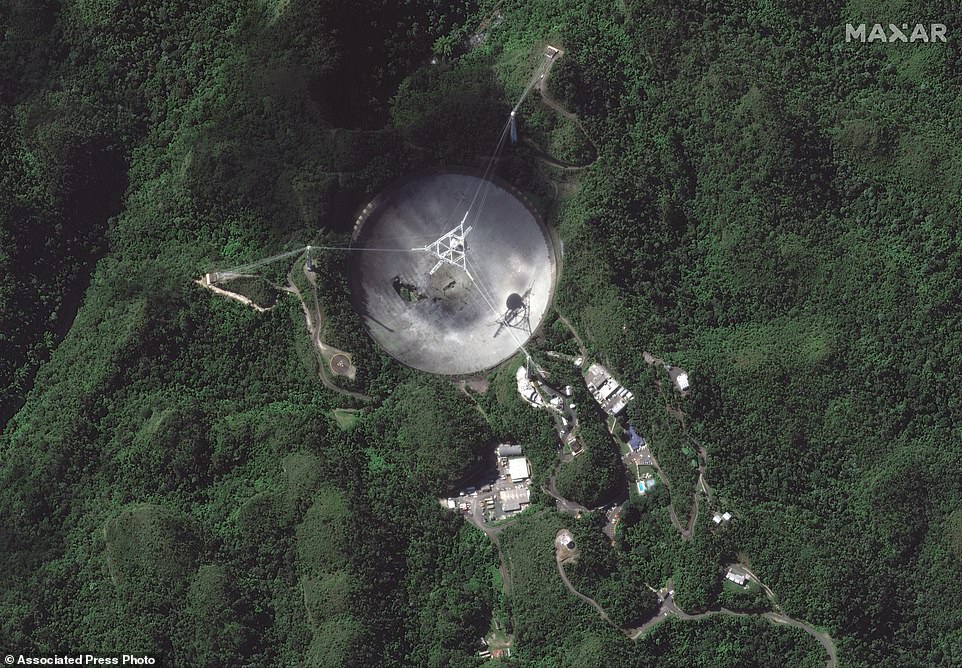 Arecibo Observatory was set to close after auxiliary cable snapped in August that caused a 100-foot gash on the 1,000-foot-wide dish and damaged the receiver platform that hung above it. Then a main cable broke in early November sealing the iconic telescope’s fate – officials were set to shut it down after 57 years of service 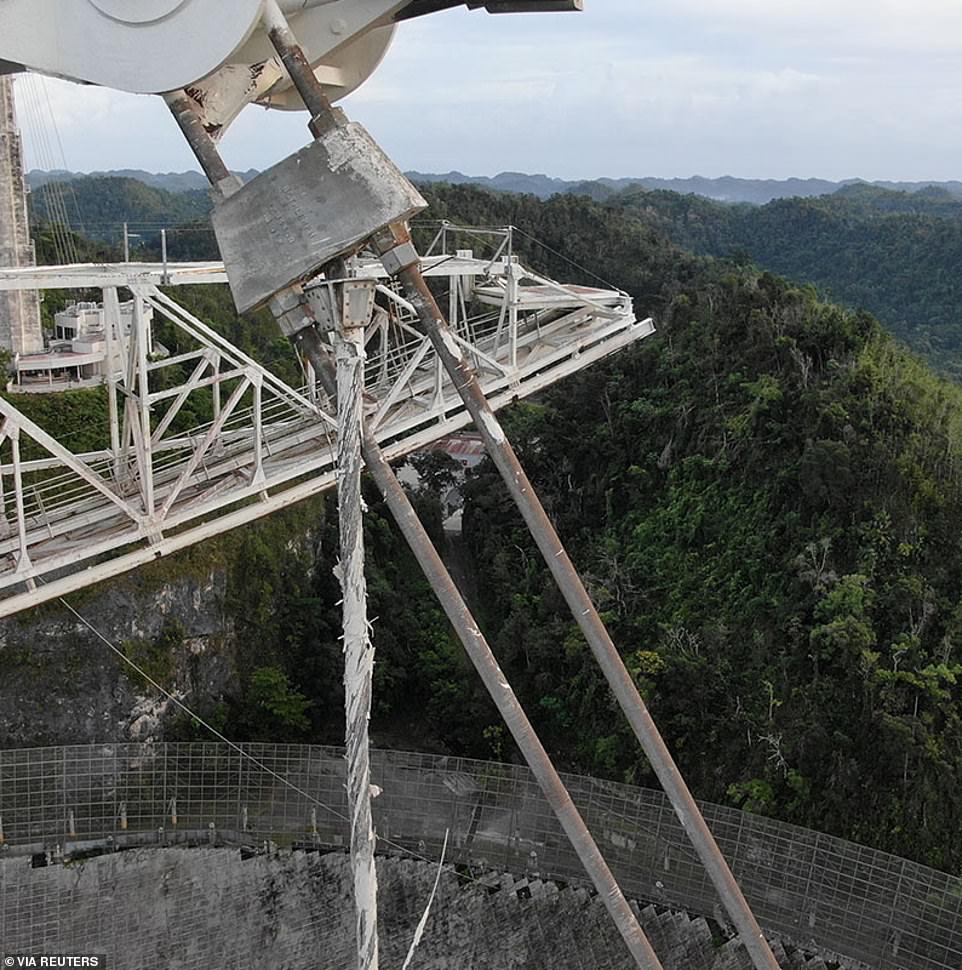 Broken cables (pictured) tore holes in the structure leading to the final decision to decommission Arecibo. Picture was taken on November 7

The telescope was instrumental in detecting the near-Earth asteroid Bennu in 1999, which laid the groundwork for NASA to send a robotic probe there to collect and eventually return its first asteroid dirt sample some two decades later.

In 1974, scientists used Arecibo to detect whirling pulsars – the first evidence for gravitational waves – earning them the 1993 Nobel Prize in Physics.

Pulsars are neutron stars – the collapsed cores of giant stars – that emit beams of radiation that sweep through Earth’s line of sight.

Alex Wolszczan, a Polish-born astronomer and professor at Pennsylvania State University, used Arecibo to discover of pulsar PSR B1257+12 in 1990.

‘I was hoping against hope that they would come up with some kind of solution to keep it open,’ he told The Associated Press.

‘For a person who has had a lot of his scientific life associated with that telescope, this is a rather interesting and sadly emotional moment.’

In 1998, Arecibo Observatory ‘found’ the Solar and Heliospheric Observatory (SOHO) spacecraft on July 28, after it lost communications with European Space Agency and NASA.

Arecibo bounced a radar signal off SOHO, enabling its mission to be resumed, and SOHO continues to produce data to this day. 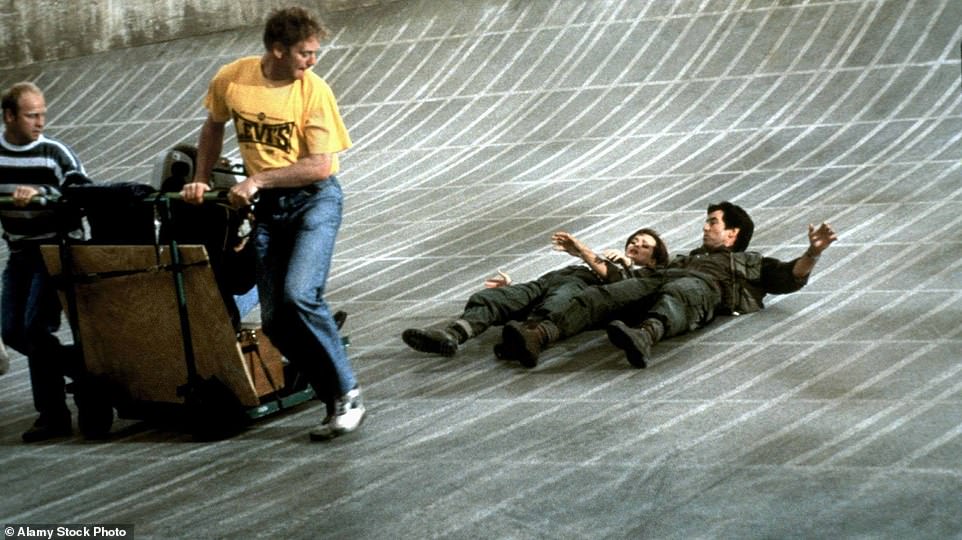 A image from the GoldenEye shoot: Izabella Scorupco, who plays computer programmer Natalya Simonova and Pierce Brosnan as 007 are filmed sliding down the observatory’s giant satellite dish 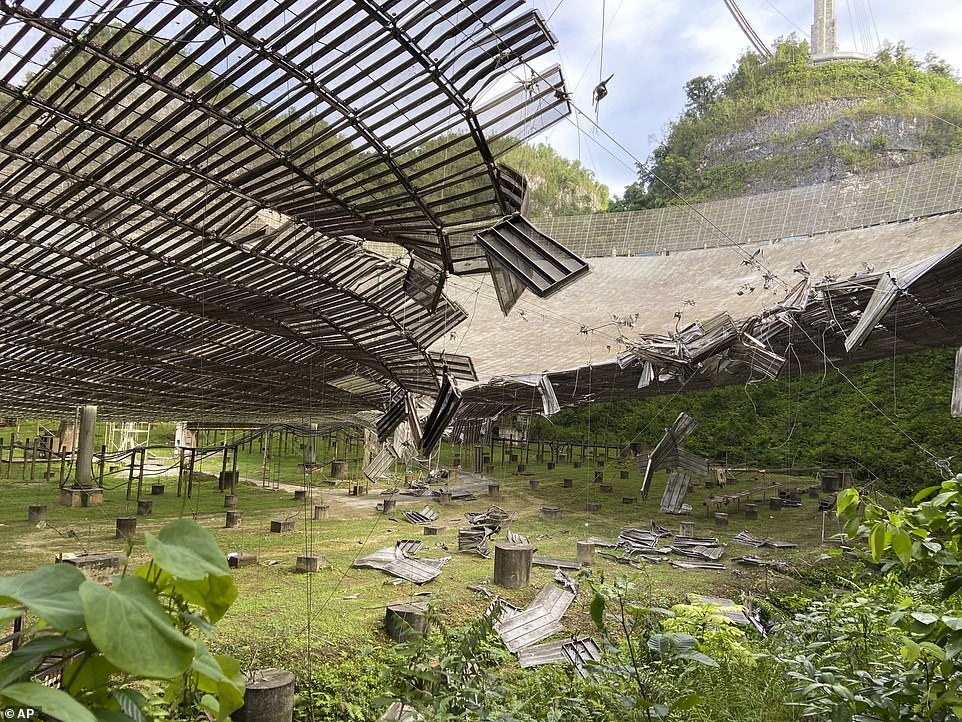 Damage in August done by a broken cable that supported a metal platform, creating a 100-foot (30-meter) gash to the radio telescope’s reflector dish in Arecibo, Puerto Rico

The distinctive observatory was the setting for the dramatic climax of GoldenEye, starring Pierce Brosnan as 007.

Bond and computer programmer Natalya Simonova, played by Izabella Scorupco, are seen sliding down the observatory’s giant satellite dish while avoiding gunfire in a memorable scene.

Later, the film’s antagonist, defected MI6 agent Alec Trevelyan played by Sean Bean, meets his fate when Bond drops him from the observatory’s antenna array, which subsequently explodes and collapses on him.

The observatory made another high-profile film appearance two year later – in the 1997 sci-fi film Contact, Jodie Foster stars as Dr Ellie Arroway, who works at Arecibo in the search for extraterrestrial intelligence.

1963: Arecibo Ionospheric Observatory Commissioned for service on November 1 for $9.7 million.

1965: One of its first accomplishments was establishing the rotation rate of Mercury, which turned out to be 59 days rather than the previously estimated 88 days.

1968: Sporadic radio pulses from the direction of the Crab Nebula supernova remnant found at Green Bank were shown by Arecibo to come from a 33-ms period pulsar situated at the centre of the nebula.

1974: The first pulsar in a binary system was discovered, leading to important confirmation of Einstein’s theory of general relativity and a Nobel Prize 1993 for astronomers Russell Hulse and Joseph Taylor.

1974: On 16 November, the ‘Arecibo message’ was broadcast into space toward the globular star cluster M13 25,000 light years away.

The message’s main purpose was to demonstrate the capabilities of newly installed equipment in the upgraded radio telescope and was an attempt to contact extraterrestrial intelligence.

1979: A large, anomalous travelling ionospheric disturbance (that is, an upper atmosphere wave) moving southeast to northwest was detected in the early morning hours – something researchers had never before witnessed. Data helped define the probable cause as an air nuclear blast over the Indian Ocean.

1981: First radar maps of the geologic surface of Venus are produced.

1989: The first measurement of hydrogen escape flux from Earth is presented, based on velocity distribution measurements of the hydrogen airglow emission in the upper atmosphere.

Early 90s: The first planets outside the solar system were discovered around Pulsar B1257+12, a rapidly rotating pulsar with three Earth-like planets in orbit.

1996: A layer of helium ions is shown to be a common, but previously unrecognised feature in the low-latitude ionosphere near 600 km.

1998: Arecibo Observatory ‘found’ the Solar and Heliospheric Observatory (SOHO) spacecraft on July 28, after it lost communications with European Space Agency and NASA,. by bouncing a radar signal off the satellite. SOHO’s mission was resumed and continues to produce data today.

September 2000: Discovery that 2000 DP107 was the first near-Earth asteroid identified by radar as a binary system. The primary is roughly spherical with a diameter of a half mile and the smaller secondary, which orbits it in 1.8 days, is about 1000 feet.

2003: Evidence for hydrocarbon lakes on the Saturn satellite Titan is established using the Observatory planetary radar.

April 2004: Installation of the Arecibo L-band Feed Array, enabling a wide variety of astronomical surveys including discovering pulsars, mapping the gas in our Galaxy, and searches for other galaxies.

October 2006: Radar images of the south pole of the moon reveal no evidence for thick deposits of ice.

November 2006: Radar images of binary asteroid (66391) 1999 KW4 in May 2001 and again in June 2002 reveal exotic physical and dynamical properties which may be common among near-Earth binaries.

March 2007: Radar images of Mercury reveal features to be studied further by the Messenger spacecraft over the next several years.

2007: The near-Earth asteroid 2005 PH5 was observed to be increasing in spin rate, due to non-uniform absorption and emission of solar radiation.

2007: Previously undetected radio lines of the molecule hydrogen cyanide (HCN), and the presence of the molecule methanimine (CH2NH), were recently discovered in the distant ‘starburst galaxy’ Arp 220.

February 2008: Discovery of the first triple asteroid system among the near-Earth asteroids. The asteroid, 2001 SN263, is about 1.5 miles in diameter, with two moons orbiting it.

2008–2012: Observations discover a radio outburst in the nearby galaxy NGC 660, ten times brighter than a radio supernova.

November 2011: Radar imaging of near-Earth asteroid 2005 YU55, which made a very close flyby. This dark, spheroidal asteroid was found to be about 1,148 feet in diameter.

2012: An ion-neutral chemistry model is developed to successfully describe thin layers of neutral metal atoms at above 62 miles altitudes.