A dangerous rise in global temperatures above the 1.5C (2.7F) limit set by the UN could happen in just five years, warn scientists.

There is a 40 per cent chance that annual temperature rises will go beyond the level set by the 2015 Paris Agreement, agreed to by 196 countries, it is claimed.

The report published by the World Meteorological Organisation also warns of a very high likelihood – a 90 per cent chance – of at least one year between 2021 and 2025 becoming the warmest on record, outstripping 2016’s record heat.

Global average temperatures of 1.5C (2.7F) above 19th century levels are seen as a threshold beyond which the most dangerous impacts of climate change will be felt.

A dangerous rise in global temperatures above the 1.5C limit set by the UN could happen in just five years, warn scientists (melting ice near Sirmilik National Park on Bylot Island pictured)

In 2020, the global average temperature was 1.2C (2.16F) above pre-industrial levels, making it among the three hottest years on record.

The predictions appear in the WMO’s Global Annual to Decadal Climate update, which is led by Britain’s Met Office.

Changes to sea levels and ice can lead to more heatwaves and other extreme weather events causing a ‘greater impact on food security, health, environment and sustainable development’ around the world.

‘This study shows that we are getting measurably and inexorably closer to the lower target of the Paris Agreement on Climate Change,’ he said.

‘It is yet another wake-up call that the world needs to fast-track commitments to slash greenhouse gas emissions.’

The pledge made by signatories to the Paris Agreement requires them to introduce legislation and take measures to limit global temperature increases.

At the lower level the aim is to keep temperatures from rising by more than 1.5C (2.7F), but studies suggest we will hit that within the next five years, pushing efforts towards ensuring we stay below the 2C (3.6F) upper limit of the pledge.

These temperature limits are global averages before the industrial revolution began to pour greenhouse gasses into the atmosphere and are set to a level that would reduce the risks and impacts of climate change from being too severe.

Current action promised by countries puts the world on track for 2-3C (3.6-5.4F) of warming by the end of the century.

‘But we know without global action we are at risk of reaching this threshold in the coming years,’ he added.

‘With so much at stake, governments must take urgent action to cut harmful emissions.’

The new WMO update confirms the rising temperature trend, finding that the mean global temperature will be at least 1C (1.8F) warmer and up to 1.8C (3.2F) warmer than pre-industrial levels within the next five years.

This isn’t down to any change in behaviour, but rather due to improved datasets, allowing for a more accurate assessment and predictions. 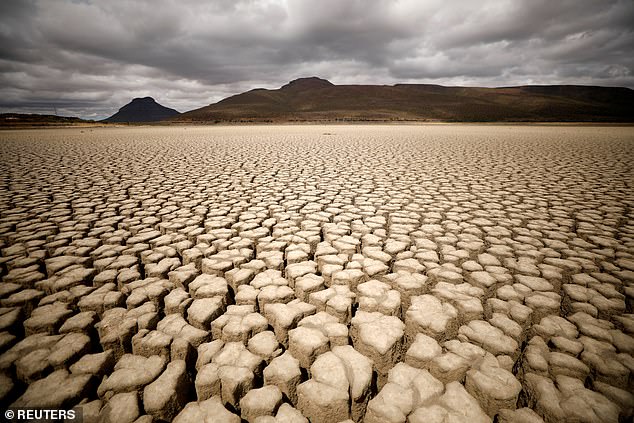 A global rise in temperatures will lead to a wider range of extreme weather events including flooding, droughts, cyclones and ice sheet melting

In 2020, the global average temperature was 1.2C above pre-industrial levels, making it among the three hottest years on record (factory in Texas pictured)

It also doesn’t mean that temperatures will consistently be 1.5C (2.7F) above pre-industrial levels for the next five years. It is more that we will ‘hit’ that point.

Professor Adam Scaife, head of seasonal to decadal prediction at the Met Office, said the study looks at long-term global averages, not those in each year or month.

‘Nevertheless, a temporary exceedance of the 1.5 degree level may already be seen in the next few years,’ he said.

The year 2021, and the crucial climate change negotiations, COP26, in November, have been widely described as a “make-or-break” chance to prevent climate change spiralling ever more out of control.

Tackling climate change is high on the agenda of the G-7 Leaders Summit hosted by the UK next month, with prime minister Boris Johnson already confirming a tougher climate pledge – to slash emissions by 78 per cent of 1990 levels by 2035.

THE KEY GOALS OF THE PARIS CLIMATE AGREEMENT

3) Goverments agreed on the need for global emissions to peak as soon as possible, recognising that this will take longer for developing countries