EXPRESS INFORMER > News & Politics > Are robovacs for suckers? Tanith Cary tries out a selection of the machines

After nearly a year of having my family at home almost 24/7, I’ve never done so much vacuuming in my life.

What was once a twice-a-week chore has become a twice-daily grind as I try to stay on top of the crumbs, hair, pet fur and mud left by my two teens, husband, dog and two cats in lockdown.

So it’s not surprising that a robot vacuum cleaner has become one of the most-wanted domestic gadgets.

Fitted with lasers, sensors and cameras to stop them getting stuck in corners, these devices can be hooked up to your phone or smart speaker so you can order them to get to work.

But with prices ranging from £90 to £800, which one should you invest in? To find out, I let a selection loose in our 240 sq ft kitchen to clean up the same amount of debris: Rice Krispies, coffee grounds and hair (cut from an old wig).

They also had to navigate our dining table and obstacles including a dog bed, dog toys, a sock and computer wires. Here’s how they got on . . .

Since Miele is said to be the Mercedes of household appliances, my hopes are high for this one. Once I’ve linked it to my smartphone app, I can get a robot’s eye view of where it’s going thanks to its two cameras. The app also maps out the whole house, allowing you to programme cleaning sessions.

As it trundles off from its charging station, its route around the kitchen seems erratic, but it’s very agile.

As soon as it found itself in a tight spot under the legs of my kitchen stool, it reversed and twirled until it found a way through. 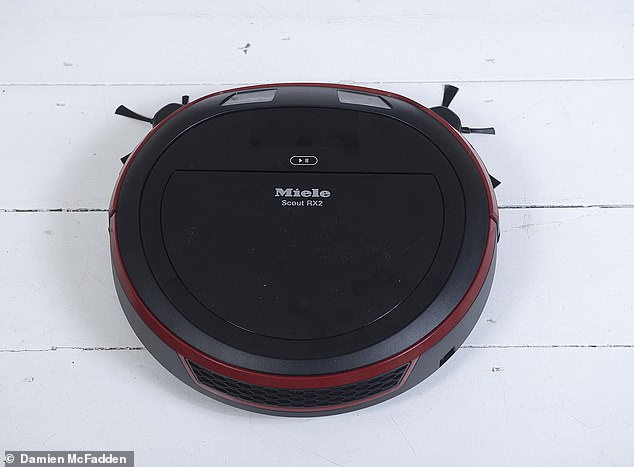 Thanks to the two circulating fan-shaped brushes at the front, it swept dirt efficiently from edges and corners, sucking it up and leaving just a few Rice Krispies, before returning to the base station after 50 minutes.

As with all the robots I tested, it takes far longer to clean up than it does if I do the job myself.

Like a homing pigeon, its mapping technology lets it know where the docking station is.

After the clean, it parked itself back there for a recharge — which takes around two hours — so it was ready to go again for another hour of non-stop use. When it’s finished you can simply turn it over, click out the dust box and empty it.

Only a sock stopped it in its tracks — it wasn’t sure whether to suck it up or go around it. But that flummoxed most of the models I tested. 8/10

STICK WITH A BROOM

How often did it get stuck? 15 times plus. 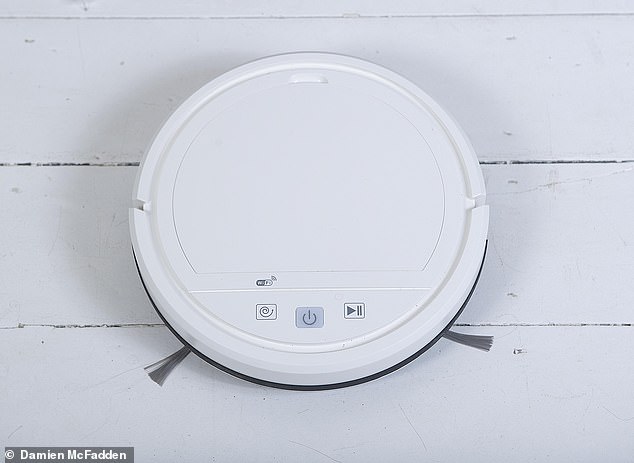 The £89.99 YunTuo Robot Vacuum Cleaner was the cheapest and smallest device that Tanith tried out, but she was left unimpressed by the product’s ‘poor’ performance

True, this device was by far the cheapest and smallest at 27cm wide, with a battery life of 90 minutes, but its performance was comically bad.

The motor was so weak it could barely cross the rug we laid out for it.

The side brushes were also so poorly designed that they distributed the coffee grounds in huge arcs across the floor, rather than sucking them up.

It got stuck on almost everything, and each time let out a plaintiff bleep. If this is the future, give me a broom. 1/10 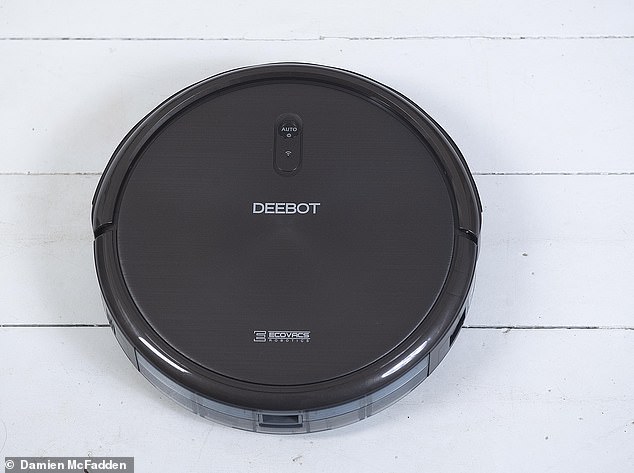 Ecovacs Deebot N79S, which costs £219.98, got stuck once at her dog’s bed but managed to extricate itself, meaning it requires little to no interference

Not all robots are all-singing, all-dancing, whirling dervishes and this one prioritises performance over its looks.

It works solo but has a remote control, so you can get it to change direction at the touch of a button.

It got stuck at the dog bed, but managed to extricate itself. It’s quiet too, which means you can programme it to work at night and come down to a clean floor in the morning. 7/10 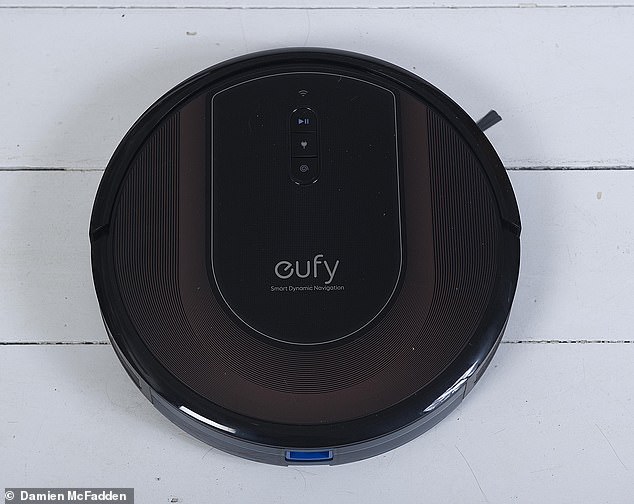 The £369.99 EUFY Robovac G30 Hybrid only comes with one sweeping brush, rather than the usual two, but it does not affect its ability and was ranked as ‘great value for money’

I love the fact that this cleaner is so shallow – at 6.5cm it’s up to a centimetre lower than its rivals. This meant it could seamlessly glide under my kitchen cabinets — somewhere that is always incredibly hard to reach.

It may have only one sweeping brush, compared with the usual two, but this doesn’t seem to be a handicap.

It’s also great value for money, considering that when it’s done sweeping it can be converted into a mop, by filling a small water tank and fixing on a microfibre attachment. Plus it has a battery life of up to 100 minutes. 8.5/10 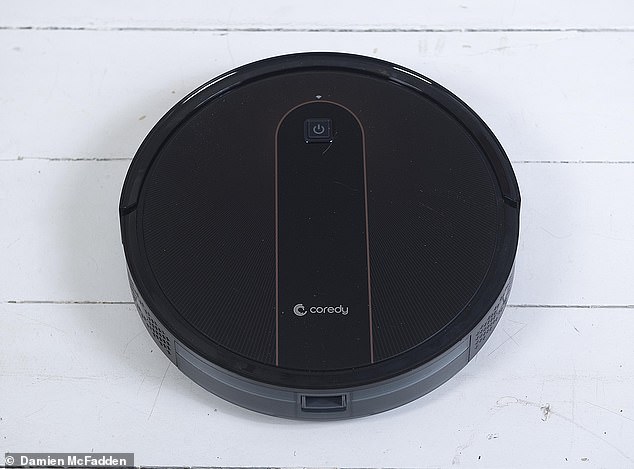 Coredy R750, which is now priced at £237.99 on Amazon, has an impressive battery life of around 120 minutes and only took 40 minutes to clean Tanith’s kitchen

After the sort of muddy walks we’ve been having, there’s nothing I’d like more than to have someone else pick up the trail of dirt that gets dragged through the house.

Now they can, because I can bark commands at my Alexa to instruct this vacuum cleaner to clean the floor from the comfort of my sofa.

On its first lap, it managed to sense when it was on carpet, increasing its suction power to 2000 Pa (pascals) to get a deeper clean and sucking up all the Rice Krispies from the pile.

And with the technology to both mop and suck for just £237.99 currently, and a battery life of around 120 minutes on bare floors, this is excellent value. 8/10

How often did it get stuck? Never. 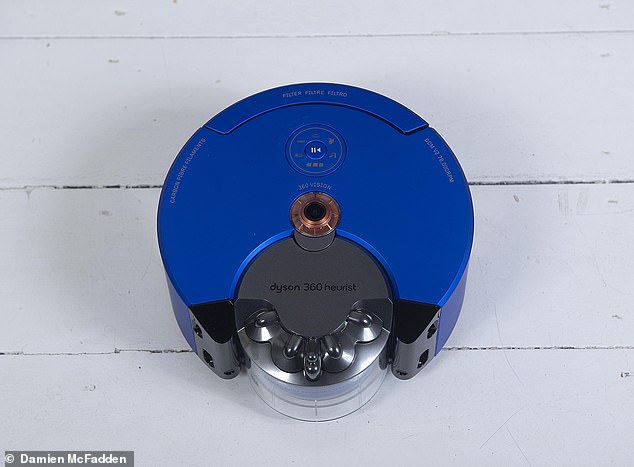 Dyson’s 360 Heurist, costing £799.99, failed to fit under the sofa due to its height, but it comes with a 360-degree camera and an LED ring light so it can even see in the dark

Dyson made a departure from the ubiquitous spaceship shape to create some-thing much more solid, which looks like a bold blue tank.

It’s almost twice as high as most of the others, at 12cm, in order to accommodate its powerful motors, but it’s smaller in width at just 22.5cm.

So while it couldn’t exactly fit under some places, such as the sofa, it could get into tighter corners.

Thanks to a 360-degree camera on the top, plus a range of sensors, it navigates brilliantly and even comes with an LED ring light so it can see where it’s going in the dark.

It’s smart, too. The more it vacuums — it can run for about 75 minutes — the more its on-board computer maps your home, making it more efficient each time it does a tour.

The dust-collecting bin is small, compared with others, so it will need emptying more often.

But for me a huge plus was the charging station — a slim, white fold-up affair, rather than the chunky black docking stations the other robots came with. 10/10

How often did it get stuck? Twice. 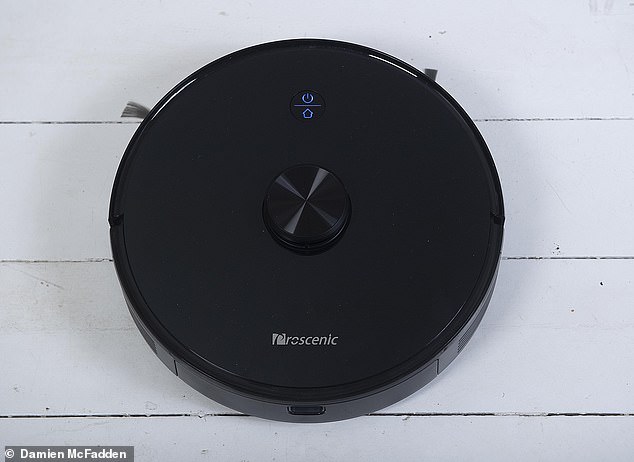 The £399 Proscenic M7 Pro Robot Vacuum had to travel across the same surface multiple times to pick up the dirt, but still managed to get the job done in an hour

Intriguingly the slogan on the box promises: ‘Endless love for all the family.’ Since I live with three long-haired humans (my husband hasn’t had a haircut in seven months due to lockdown), it’s true I might be more favourably disposed towards them if I didn’t have to vacuum up so much of their  hair.

This cleaner has a suction power of 2600 Pa, compared with the 2000 of many other models.

It was so strong that as well as gobbling up the chunk of 5in hair that I left in its path, it started pushing the dining chairs around, too.

Though one of the widest models at 34cm, it often didn’t pick up dirt the first time, criss-crossing the kitchen two or three times before it picked up every grain of the coffee grounds.

But it’s got the endurance to get the job done — it can keep cleaning for up to 150 minutes, before needing to recharge. 8/10