Luisa Zissman has hit out at a ‘jobsworth’ stewardess on an easyJet flight after she yelled at a family for failing to stop their child standing on his seat.

Apprentice star Luisa shamed the cabin crew member and claimed she threatened the family with a £100 cleaning fee.

The mother-of-three said the family had ‘limited English’ and called the stewardess an ‘idiot’ who was on a ‘disgusting power trip’.

She added that the little boy was not wearing any shoes and was standing on the seat and looking towards other family members sat in the row behind him. 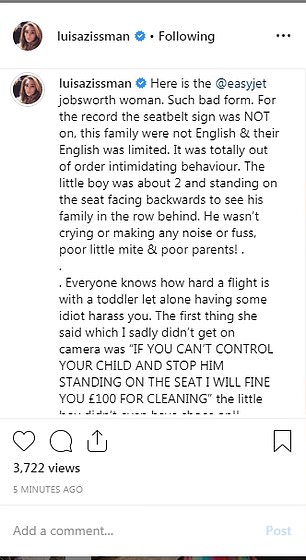 Sharing a video of the confrontation on Instagram, Zissman (left) wrote: ‘Here is the easyJet jobsworth woman. Such bad form (right)

She also claimed the seat belt signs were not on at the time the staff member was talking to the family.

Sharing a video of the confrontation on Instagram, Zissman wrote: ‘Here is the easyJet jobsworth woman. Such bad form.

‘For the record the seatbelt sign was NOT on, this family were not English & their English was limited. It was totally out of order intimidating behaviour.

‘The little boy was about 2 and standing on the seat facing backwards to see his family in the row behind. 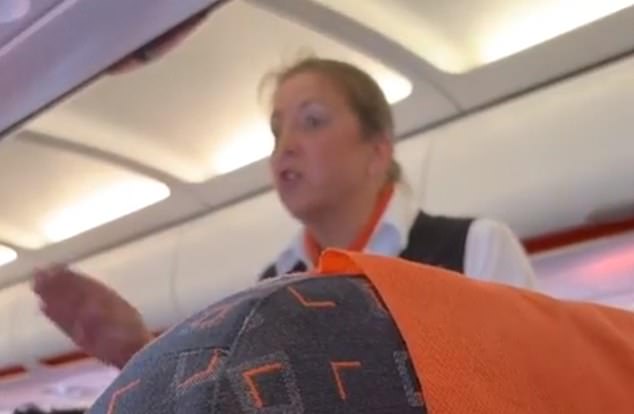 She added that flying with a young child is ‘hard… let alone having some idiot harass you’.

Zissman added: ‘The first thing she said which I sadly didn’t get on camera was ‘IF YOU CAN’T CONTROL YOUR CHILD AND STOP HIM STANDING ON THE SEAT I WILL FINE YOU £100 FOR CLEANING’ the little boy didn’t even have shoes on!

‘Travelling with children is so stressful, all the bollocks about safety was a load of crap so she could attempt to justify her disgusting power trip.

‘Give someone an orange uniform and BAM.’

Luisa, who said she had been on her way back from France when she took the video, also said on her Instagram that she had been contacted by other families who had encountered the stewardess.

A spokesman for easyJet said: ‘It is clear from the video the crew member is concerned for the safety of the child so requested that they either stand on the floor or sit on the seat. We don’t charge customers for cleaning.

‘We are sorry if the manner in which the crew member explained this caused offence.

‘The safety of our passengers and crew is our highest priority.’ 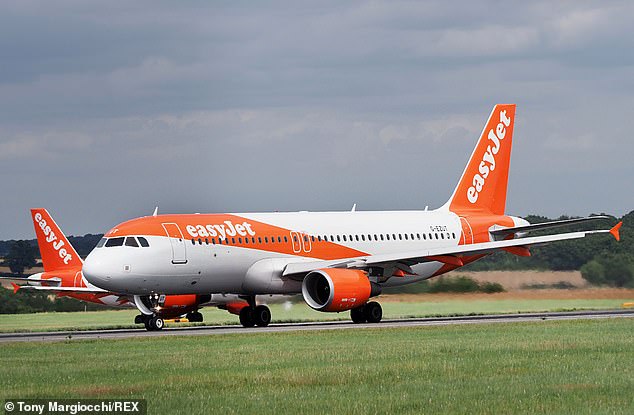 EasyJet pays out £165,000 to family of late grandfather, 90, after he suffered stroke on flight but got no medical help as cabin crew told other passengers to ‘keep an eye’ on him

EasyJet has paid £165,000 to the family of a British grandfather who suffered a stroke on a flight but received no medical help.

The airline’s cabin crew – who are trained to notice signs of a stroke – even asked other passengers to ‘keep an eye’ on Keith Tarry on his plane back to visit family in the UK from Majorca in April 2017.

Mr Tarry, who lived on the Spanish island, suffered the medical episode before the flight took off, and was unable to speak or move when his relatives saw him in the UK. 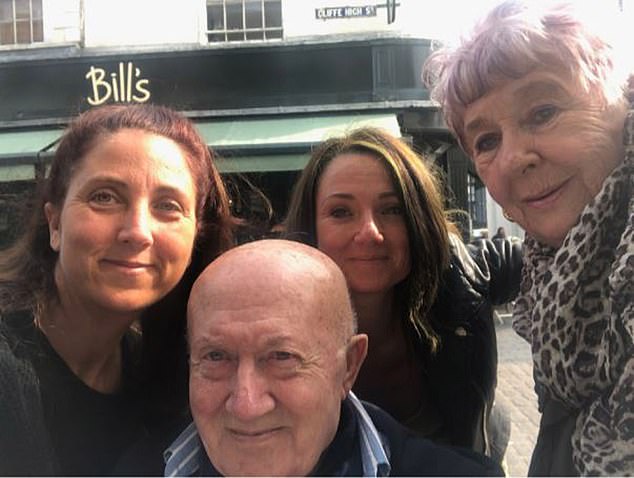 Keith Tarry, pictured with (L-R) daughters Lauren and Claudia and wife Angela. The family have been awarded £165,000 from easyJet after cabin crew members failed to treat Keith on a flight from Majorca after he suffered a stroke

One crew member said they were concerned about him and gave him a glass of water, which remained untouched during the flight.

When he landed at Stansted Airport, he was escorted from the plane on a wheelchair by airport staff and met by his stunned wife and daughters who were left to call paramedics.

The family launched legal proceedings against the budget airline and won a High Court battle.

The stroke meant Mr Tarry had to move from Palma and into a nursing home in Worthing, West Sussex, and he died of an unrelated illness aged 90 last month.

But his devastated wife Angela, 80, insists her husband could have lived for longer if he had have been treated correctly by first aid-trained crew members.

Mrs Tarry, a retired psychotherapist of Lancing, West Sussex, said: ‘I feel like my husband was cheated out of the last couple of years of his life.

‘He was a very strong, fit man and could have gone on for longer.

‘I think he could have made a quicker recovery if the staff had noticed he’d had a stroke.

‘They should have called for a doctor before they took off. With strokes, you have to act fast.

‘Their training at easyJet is absolutely excellent, I know that, so why did they not do anything for Keith?

‘I am appalled by the negligence and, quite frankly, I can never forgive the crew members who were working. 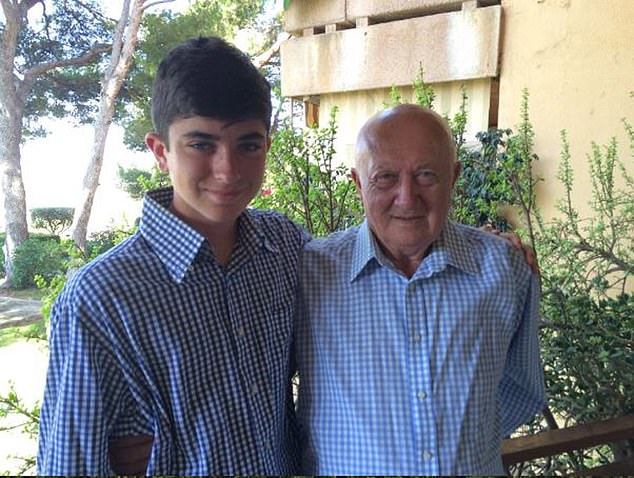 The family of Keith Tarry, pictured with his grandson Zachary, have been awarded £165,000 from easyJet after cabin crew members failed to treat Keith on a flight from Majorca after he suffered a stroke

‘Where was their human compassion for an elderly gentleman who can’t move out of his seat? I can never come to terms with that.’

Grandfather-of-one Mr Tarry, who worked as a contractor for an American construction company, travelled the world in his job and had been living in Majorca for 40 years.

He also spoke French, Spanish, Italian, Arabic and Russian – and after suffering the stroke would often say words in those languages instead.

Mrs Tarry said her husband became a shadow of the man he was, and had forgotten what he did for a living.

He managed to learn how to speak again, but died last month after rupturing an unrelated aneurysm.

Mother-of-two Mrs Tarry, who was married to Mr Tarry for 59 years, said: ‘Keith phoned me when he was leaving for the airport, saying he’d just called for a taxi and said “I’ll see you soon”.

‘He was going to the airport with one of our friends, and we arranged special assistance for him at Palma airport because it’s a long walk to the plane.

‘Then we were told that after he boarded the plane, one of the crew members was concerned about him.

‘I can’t believe that they were so concerned that they asked other passengers to look after him. They should have called a doctor to see if he was fit to fly.

‘He could have got to hospital quickly if they did that.’

Mr Tarry appeared at the High Court hearing in June – on his 90th birthday – when the family was awarded £165,000. Mrs Tarry said the fees mainly covered the costs of her husband’s nursing home care.

She said: ‘This case wasn’t about the money. The money is chicken feed to easyJet – we didn’t do it for that.

‘If I could get the crew in front of me, I would like to say to them: “How could you allow this to happen?”

‘I would like them to explain and to see some remorse.

‘The worst part about it is they are trained to notice these things, and every year they have to re-do the training, too.’

Ben Davey, of Dean Wilson Solicitors, who brought the claim, said: ‘All crew members of an aircraft are trained in first aid, including to recognise the signs of stroke.

‘There have been well publicised “FAST” campaigns stressing the importance of timely medical intervention in respect to strokes, and it was a real shame that this did not happen with Mr Tarry.

‘I am pleased that after over two years of fighting for their dad that the family finally have some closure over the matter.

‘I hope that easyJet have reflected on the incident and have taken appropriate steps to ensure that this never happens again.’

An easyJet spokesman said: ‘We at easyJet are very sorry that we did not reach the standards expected of us on this occasion. The safety and wellbeing of our customers is our highest priority and we have learnt lessons from this.’

A letter from easyJet to one of Mr Tarry’s daughters read: ‘Unfortunately, despite their training, the cabin crew on board did not identify that your father was displaying any signs of a stroke and consequently did not take action in response. ‘

easyJet regrets that cabin crew did not seek to contact you or your sister or have a ground and/or special assistance agent do, so we at easyJet are very sorry that we did not reach the standards you would expect of us on this occasion.’