Apple’s upcoming flagship smartwatch will have a 5 per cent bigger display and be able to track your body temperature to detect if you have a fever, leaks suggest.

According to prolific Apple tipster Mark Gurman in Los Angeles, the firm will add body-temperature detection to its Series 8 model, expected to be released this autumn.

This would make the Series 8 the biggest Apple Watch screen yet, although the biggest on the market overall is the Domiwear DM100, which has a whopping 2.86-inch screen.

In comparison, the Apple Watch Series 7‌, released last year, was available with either a 1.691-inch or a 1.901-inch screen.

Apple is expected to release a total of three smartwatches this autumn, including the Series 8, which is also rumoured to have a flat screen.

Apple is expected to release a total of three smartwatches this autumn, including the Series 8, which is also rumoured to have a flat screen. Renders created by Arkansas-based leaker and YouTube host Jon Prosser show what the Series 8 screen could look like 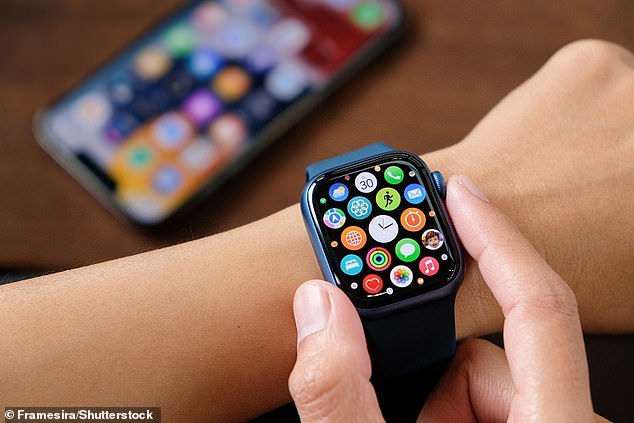 Apple has released a new flagship Apple Watch every year since 2015. 2021’s Apple Watch Series 7 (pictured) was released in autumn with up to 33 per cent faster charging and a bigger display, with prices starting from £369

Young was responding to a query on Twitter, while Gurman was writing in the latest instalment of his ‘Power On’ newsletter.

‘The body temperature feature won’t give you a specific reading like with a forehead or wrist thermometer, but it should be able to tell if it believes you have a fever,’ Gurman says in the newsletter.

‘It could then recommend talking to your doctor or using a dedicated thermometer.’

Other than the body-temperature reader, other hardware changes in the new smartwatch will ‘probably be minor’, he added.

Gurman is described as ‘respected’ and has a good track record when it comes to accurate leaks of the tech giant’s products.

Apple Track, a blog that keeps tabs on Apple rumours and the sources that publish them, currently gives him an accuracy rating of 86.5 per cent.

Young has an even more impressive track record – currently 92.5 per cent on Apple Track.

Gurman has already suggested that the Series 8 will also feature a flat screen, rather than a screen with curved edges like the Series 7. 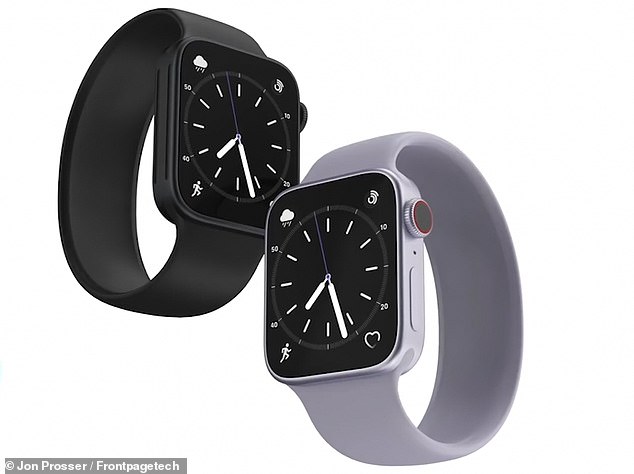 Gurman has already suggested that the Series 8 will also feature a flat screen, rather than a screen with curved edges like the Series 7. Pictured are Jon Prosser’s renders 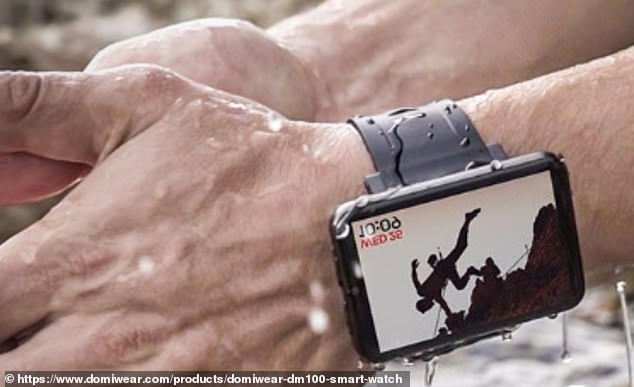 The biggest smartwatch screen on the market overall is the Domiwear DM100 (pictured), which has a whopping 2.86-inch screen

Gurman has also said that Apple will launch three smartwatches in 2022 – the flagship Apple Watch 8, a cheaper Apple Watch SE 2, and a ‘rugged’ Apple Watch aimed at ‘extreme sports athletes’.

The ‘ruggedized’ watch would be more durable and resistant to scratches to compete with rival firms including Garmin and Coros.

As for the updated version of the Apple Watch SE, Gurman has revealed fewer details in his newsletters.

SE is the name for Apple’s lower-price products – not just for smartwatches but iPhones too. In 2020, Apple released iPhone SE 2, four years after the original iPhone SE.

The £249 Apple Watch SE, also released in September 2020, is a lower-price option for wearers, but it lacks features including an always-on display, a blood oxygen sensor and an electrocardiogram (ECG).

Gurman didn’t mention what upgrades will be included in the 2022 version – thought to be called Apple Watch SE 2 – or whether it would be more expensive than the original.

Apple will launch three smartwatches in 2022, according to a respected Apple tipster. Pictured is the Apple Watch Series 7 in various colours, released this year

It’s likely the three Apple smartwatches that make up the 2022 range will be released in the autumn, which is when the iPhone 14 is expected to be released.

Apple has released a new flagship Apple Watch every year since 2015. Last year’s Apple Watch Series 7 was released in autumn with up to 33 per cent faster charging and a bigger display, with prices starting from £369.

It’s not the first time rumours of a rugged Apple Watch have surfaced from Gurman – in March 2021, he reported the ‘Explorer Edition’ would have a more durable rubber frame and extra impact-resistance to hold up in extreme environments.

He said it would launch later this year or early 2022, but it appears his estimations for a release date have now been pushed back.

Apple considered a more rugged version of its Apple Watch when it first launched the wearable to much fanfare in 2015, but never released this product to consumers.

According to Mark Gurman, the iPhone will be able to display a small amount of ‘quickly glanceable’ information before its screen has been unlocked.

Such a feature would be similar to Android phones that always show basic information – like time and battery level – on a dark screen while conserving power.

According to Apple, always-on is turned on by default on Apple Watch Series 5 and later, except for Apple Watch SE.

‘In this mode, the time will always be visible, along with the watch face or your most recent active app,’ the firm says.