Apple has officially unveiled the first Mac computers with its new in-house M1 chip at its ‘One More Thing’ event.

M1 delivers two times the performance per watt compared to the PC chip, transforming the new Macbook Air into the fastest computer Apple has produced.

The new Macbook Air starts at $999 and features 15 hours of wireless web browsing, 18 hours of video playback and twice as long video conferencing than previous models.

The 2020 Mac fearures a 13.3-inch display and starts with 16GB of memory – users can pay extra for an upgrade to 2TB of storage.

Apple also unleashed the new M1 in its Mac mini, providing it with three times the performance than previous models.

The upgraded version starts at $699, which is $100 less than its predecessor.

This marks the first time in the Mac’s 36-year history that the line will be powered by an Apple-designed processor, which offers better performance, higher bandwidth and consume less power than the Intel-based machines currently in use.

Apple has used Intel Chips in its Mac computer since 2005, making the transition to its own in-house chips a ‘historical’ change for the computer.

M1’s technology is based on the chips used in the iPhone, Apple Watch and iPad, which will allow Macs to run apps that were initially designed for Apple’s other devices.

Apple now on a path for producing all of its chips in-house, which is called Apple Silicon, but the M1 is designed specifically for the Mac.

And Apple is putting all of its focus on power-per-watt when measuring the performance of the chip.

M1 is based on a 5 nanometer process, allowing Macs to transition to a smaller chip – Intel has not yet mastered the development of a chip that sizes.

The 2020 MacBook Air is more than three times faster than Intel-powered Macs, has up to five times faster graphics performance and its machine learning operations is also nine times faster.

‘The arrival of Apple Silicon for Mac allows Apple to extend the capability of its ‘A’ series of processors beyond iOS and cuts its dependence on Intel,’ he said.

‘This should provide advantages in performance, scale and cost. We believe Apple will gain a lot of flexibility and agility when it comes to future products.’ 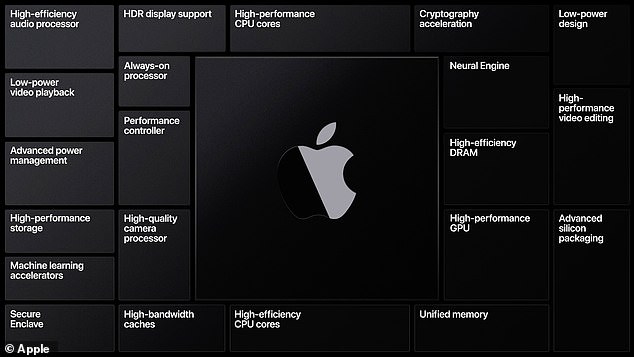 The tech giant first announced the Arm chip at its June Worldwide Developers Conference, calling it a ‘historical’ change to its Mac lineup. The new processor will also include a range of capabilities such as HDR display support, more storage, higher bandwidth and more 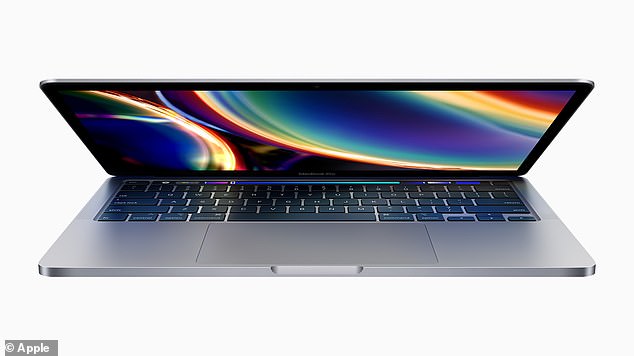 Apple is set to start shipping the first Arm Macs before the end of the year, with all of the devices boasting the new system within two years

‘By having its own silicon platform, Apple should be able to reduce the risk of being tied to Intel’s processor plans and its fabrication schedule,’ said Lam.

‘Although Apple will now be reliant on TSMC or Samsung for manufacturing, the sheer number of ‘A’ series chips already being made means that Apple is a key customer and will likely have priority access to leading-edge nodes such as the 5 nanonmeter process being used for the A14 chips in the iPhone 12 and iPad Pro.’

The November 10 event will be third launch of services and products Apple has held in the past three months.

The handset also includes a ceramic shield that the firm says is ‘tougher than any smartphone glass.’

The new addition is ‘virtually impervious to heat and electricity’ and makes it more resistant if dropped.

Along with the iPhone 12, Apple announced three other smartphones including the iPhone 12 Pro, iPhone Pro Max and its all-new iPhone mini with a price tag of $699.

The tech giant also unleashed its fastest camera into the new lineup.

The dual-lens camera system boasts a 12-megapixel ultra-wide and wide lenses, along with a seven-element lens that improves low-light performance by 27 percent.

WHAT IS APPLE’S NEW ARM PROCESSOR?

Apple is switching from Intel to its own custom-made ARM chips.

The switch to its own silicon-based chips will allow apps made for iOS and iPad to run natively in MacOS for the first time.

It says the transition will also increase performance and consumes less power than the Intel chips it currently uses. It may also make it easier for developers to optimize apps across its ecosystem.

At WWDC, Apple officially announced the transition, saying that it will start the transition by the end of 2020. The process could take about two years.