Apple has officially launched its long-awaited Emergency SOS via satellite in the United States and Canada, allowing iPhone 14 users to send text messages in the event of an emergency while outside of cellular and Wi-Fi coverage.

The messages are sent in about 15 seconds if the user has a direct view of the sky and horizon, but the call for help could take longer if there are obstacles such as forests or mountains in the area.

While pricing for the service has yet to be revealed, it will be free to users for two years – industry experts speculate Apple wants to see how it is used before setting a cost.

The service is possible through 24 Globalstar satellites, in which users point their iPhones to the sky to connect with one of the devices that then beams their message to the closest dispatch.

While the Tuesday rollout is only in the US and Canada, Emergency SOS will be available in France, Germany, Ireland, and the United Kingdom in December. 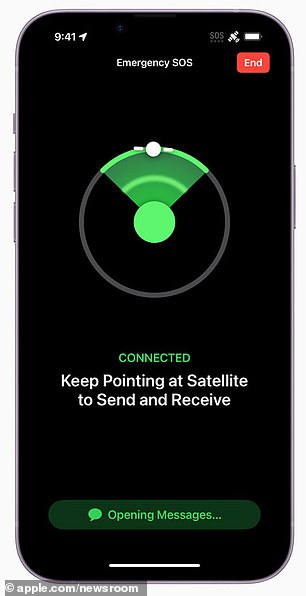 Apple is using satellite internet to save lives

Apple’s Emergency SOS services sends messages within 15 seconds, but can take longer if there is poor weather or obstacles like mountains.

Once users connect to a satellite, they are given a questionnaire that asks about their emergency.

The message is sent to the closest dispatcher or a relay center with Apple-trained emergency specialists if the dispatcher is unable to receive text messages.

The message will include the user’s location, Medical ID, emergency contact and their iPhone’s battery life

Greg Joswiak, Apple’s senior vice president of Worldwide Marketingm, said: ‘Some of the most popular places to travel are off the beaten path and simply lack cellular coverage.

‘With Emergency SOS via satellite, the iPhone 14 lineup provides an indispensable tool that can get users the help they need while they are off the grid.’

The emergency messages – which appear in grey, unlike the standard green or blue – automatically share your Medical ID and emergency contact information (if you have them set up), your location, emergency questionnaire answers and the remaining battery life for your iPhone.

The new feature was introduced in September, along with the new iPhone 14 lineup.

When a user needs help while outside cellular coverage, they point their smartphone to the sky in order to connect to one of 24 satellites.

A short questionnaire appears to help the user answer vital questions with a few simple taps, which is transmitted to dispatchers in the initial message, to ensure they are able to quickly understand a user’s situation and location.

The questionnaire appears on the smartphone, first asking users ‘what’s the emergency,’ allowing them to choose from: Car or Vehicle Issue, Sickness or Injury, Crime, Lost or Trapped and Fire. 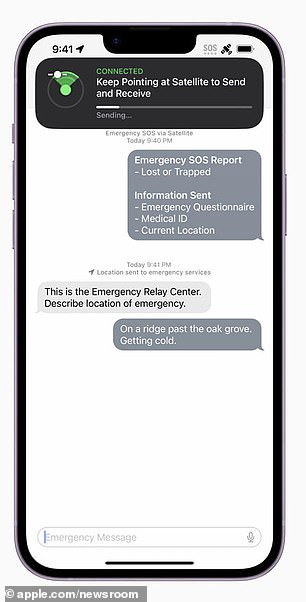 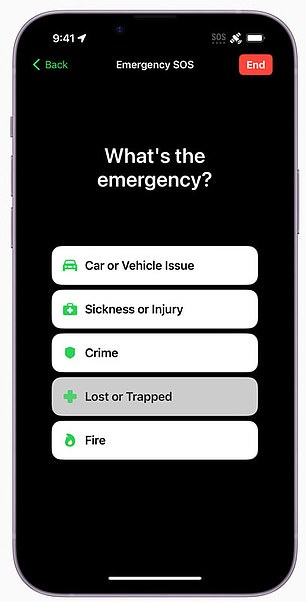 Messages with the new feature appear gray in the text message box, allowing users to communicate with dispatch after they send a questionnaire about their emergency

The next slide on the display asks if it is you, someone else or multiple people who need help and then the features asks if anyone is injured.

One of the parts of the questionnaire asks if any of these apply and shows Steep Terrain, Water or a Cave. 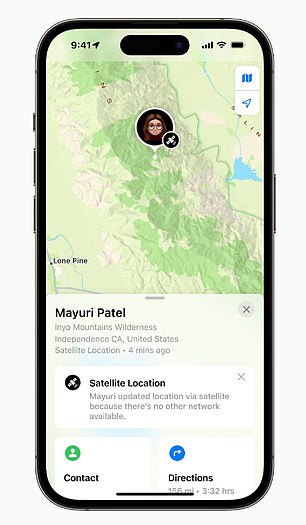 Apple said it worked closely with experts to review standard questions and protocols to identify the most common reasons for calling emergency services.

The questionnaire and follow-up messages are relayed directly via satellite to dispatchers that accept text messages, or to relay centers staffed by Apple‑trained specialists who can call for help on the user’s behalf.

The transcript can also be shared with the user’s emergency contacts to keep them informed.

Apple designed and built custom components and software that allow iPhone 14 to connect to a satellite’s unique frequencies without a bulky antenna.

A text compression algorithm was also developed to reduce the average size of messages by 300 percent, making the experience as fast as possible.

Laurene Anderson, NENA: The 9-1-1 Association’s president and Charlotte County, Florida’s E911 manager, said in a statement: ‘Emergency SOS via satellite will not only be useful for those who live in rural areas without cellular coverage, but also for those who find themselves in the path of a natural disaster that takes down mobile networks.

‘It will allow members in impacted communities to connect with 911 and get help, and that’s our mission.’