The largest wildfire recorded this year in California has turned fatal as the inferno exploded in size and emblazed its way through Klamath National Forest.

Two people have been found dead in their car in the town of Klamath River, California, amid the apocalyptic scenes as thousands of homes were evacuated, Siskiyou County Sheriff Jeremiah LaRue confirmed.

It’s believed that the two people who tragically died were attempting to flee the fast-moving flames ripping through the state’s dry terrain.

The threatening McKinney blaze – which is now engulfing 80 squared miles of dry tinderbox wildland in the area – has been spurred on by gusty winds and lightening strikes.

Firefighters are working tirelessly to put out the unpredictable blaze, which began on Friday afternoon – but it is currently zero per cent contained, according to Cal Fire.

Over 100 structures, including homes, have burned to the ground in just over 60 hours since the McKinney fire started. 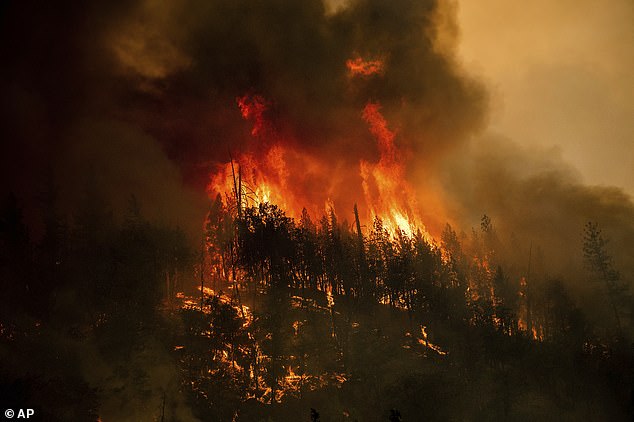 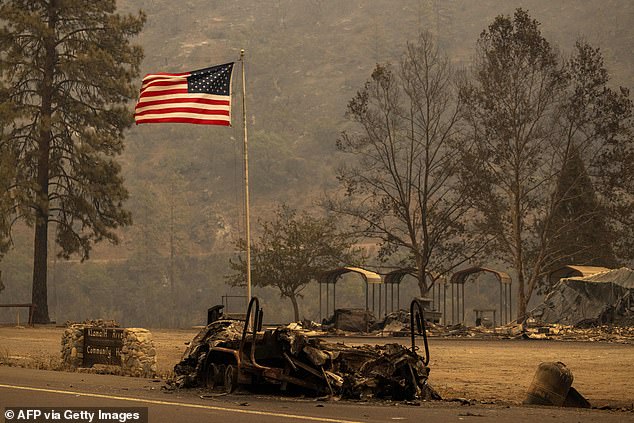 The charred remains of a boat on a trailer are seen at the McKinney Fire in the Klamath National Forest northwest of Yreka, California 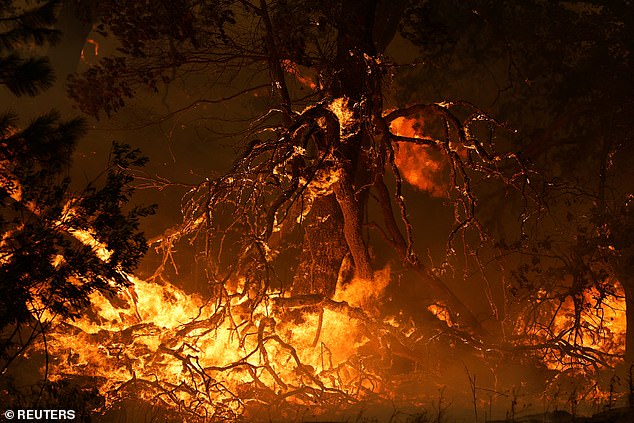 The McKinney Fire burning near Yreka, California on Saturday 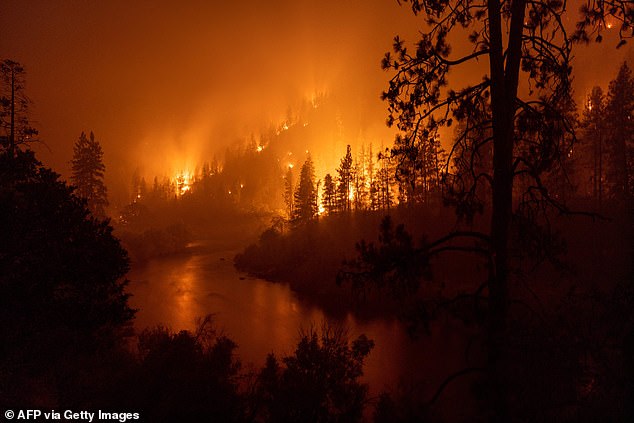 Flames burn to the Klamath River during the McKinney Fire in the Klamath National Forest northwest of Yreka, California, on July 31, 2022. The largest fire in California this year is forcing thousands of people to evacuate as it destroys homes and rips through the state’s dry terrain

Authorities are now trying to protect homes and infrastructure instead of attempting to calm the size of the roaring wildfire.

Intense overhead clouds formed by the inferno, which has been described as a ‘fire-breathing dragon of clouds’ is said to be generating its own thunderstorm – with many fearing that this will spark additional fires.

California Governor Gavin Newsom declared a state of emergency Saturday as the fire intensified, in a bid to get state resources focused on saving the county from charring destruction.

Yesterday Caroline Quintanilla, a spokeswoman at Klamath National Forest, said: ‘It’s continuing to grow with erratic winds and thunderstorms in the area and we’re in triple digit temperatures.’

Highway 98 has been shut because of the fires in the area and parts of Yreka, California have now been evacuated.

The Yreka Police Department issued evacuation orders for a neighborhood in the western part of the town – where they told locals to ‘leave immediately.’

According to the National Weather Service, temperatures on Sunday rose between 90F and 100F causing a red flag fire danger warning to be issued. 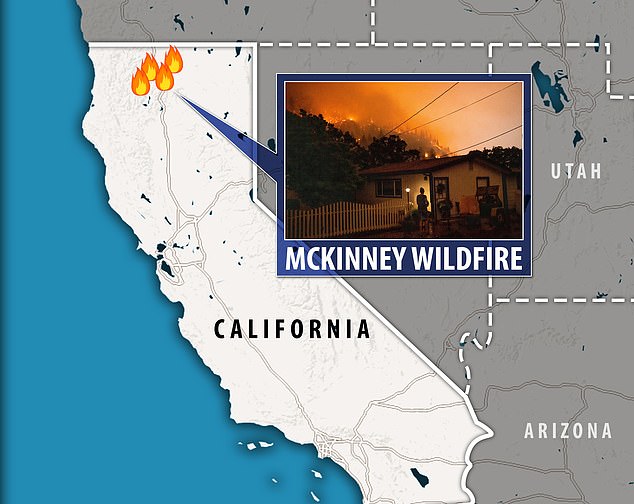 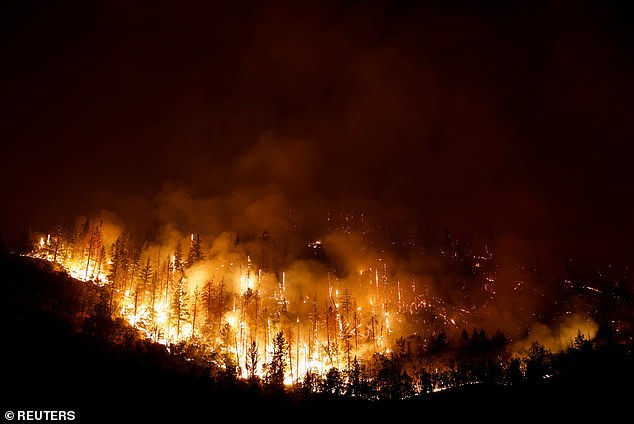 The McKinney Fire burns near Yreka, California, as it ravaged 80 square miles of vegetation, destroying a dozen homes and forcing local residents to evacuate 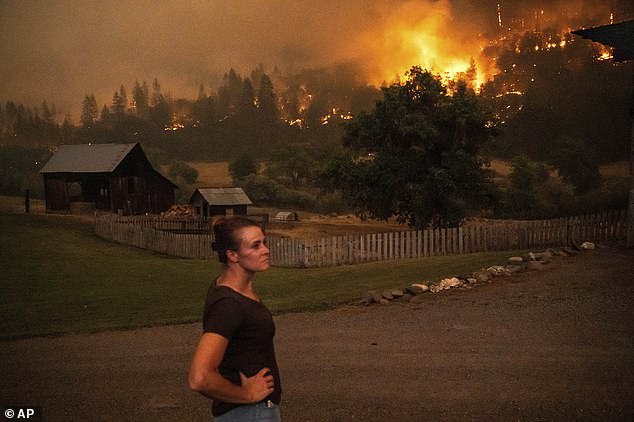 Crawford and her husband stayed, as other residents evacuated, to defend their home from the Mckinney fire in Northern California 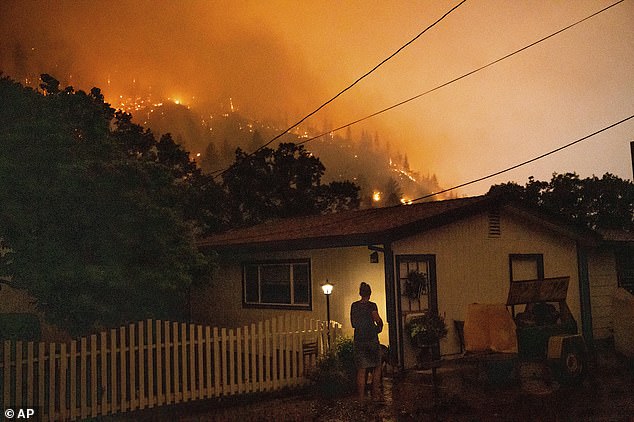 Crawford walks past her home as a wildfire called the McKinney fire burns above the hill from her house in the Klamath National Forest, northern California, on Saturday 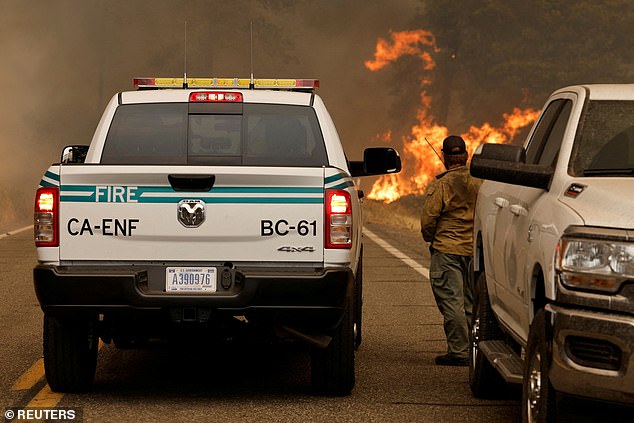 Highway 98 has been shut because of the fires in the area and parts of Yreka, California have now been evacuated

The Jackson County Sheriff’s Office said search crews rescued about 60 hikers from backpacking on a trail that runs from Canada to Mexico.

The Pacific Coast Trail Association urged hikers to get to the nearest town while the U.S. Forest Service closed a 110-milesection of the trail from the Etna Summit to the Mt. Ashland Campground in southern Oregon.

Oregon state Representative Dacia Grayber, who is a firefighter, was camping with her husband, who is also in the fire service, near the California state line when gale-force winds awoke them just after midnight.

The sky was glowing with strikes of lightening in the clouds over the weekend, while ash was blowing at them, though they were in Oregon, about 10 miles away.

Intense heat from the fire had sent up a massive pyrocumulonimbus cloud, which can produce its own weather system including winds and thunderstorms, Grayber said.

She said: ‘These were some of the worst winds I’ve ever been in and we’re used to big fires.

‘I thought it was going to rip the roof top tent off of our truck. We got the heck out of there.’

On their way out, they came across hikers on the Pacific Coast Trail fleeing to safety.

‘The terrifying part for us was the wind velocity,’ she said. ‘It went from a fairly cool breezy night to hot, dry hurricane-force winds. Usually that happens with a fire during the day but not at night. I hope for everyone’s sake this dies down but it’s looking like it’s going to get worse.’ 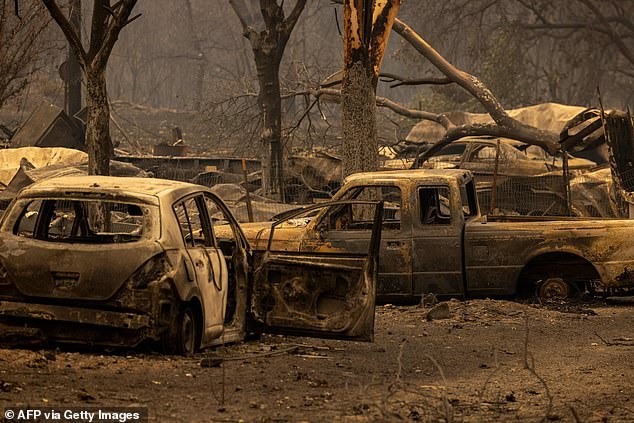 The ruins of the Oak Mobile Park are seen at the McKinney Fire in the Klamath National Forest northwest of Yreka, California, on July 31, 2022 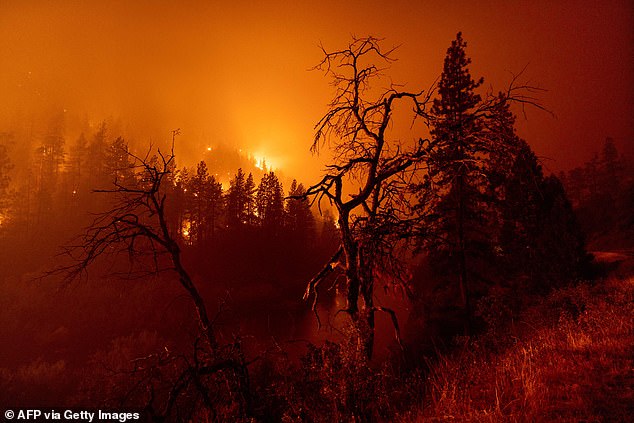 Flames burn to the Klamath River during the McKinney Fire in the Klamath National Forest northwest of Yreka, California 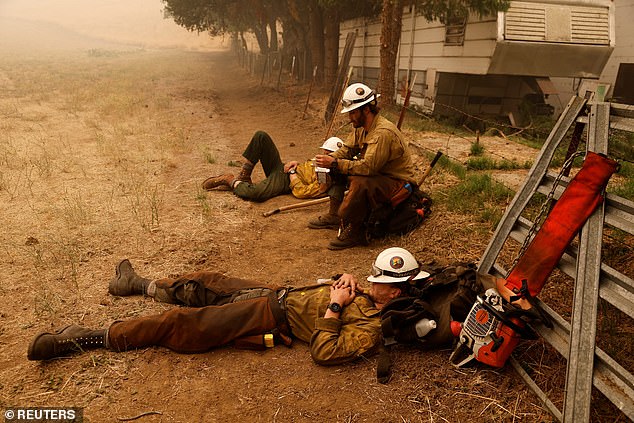 Klamath Interagency Hotshots rest while waiting for a new assignment as the McKinney Fire burns near Yreka, California 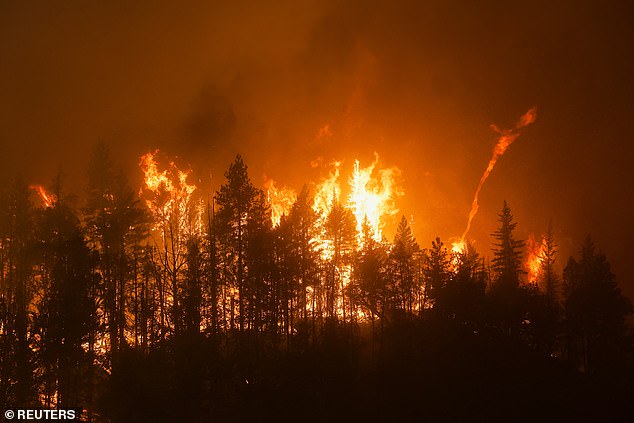 The McKinney fire has been burning since Friday afternoon, and is currently zero per cent contained