ANZ and Westpac are predicting interest rates will jump by a whole percentage point over the next six to seven months – with the Reserve Bank forecast to increase rates four more times.

Those hikes would cost Australian borrowers with an average $600,000 mortgage another $372 a month in repayments – and all of it on top of a record seven consecutive rate rises and inflation hitting a new, 32-year high.

It comes as the Reserve Bank on Tuesday hiked rates by another 0.25 percentage points – taking the cash rate to a new nine-year high of 2.85 per cent.

In recent forecasts, ANZ and Westpac both predict the cash rate will hit an 11-year high of 3.85 per cent by May 2023.

What a borrower with average $600,000 would owe as rates rose

Reserve Bank Governor Philip Lowe is now expecting inflation to hit a new 32-year high of 8 per cent this year, up from a previous forecast of 7.75 per cent.

Dr Lowe is also forecasting inflation will remain above the RBA’s 2 to 3 per cent target into 2024 – which is the reason behind the further rate hikes.

‘At our meeting today we discussed the damage that high inflation does to people; it is a scourge,’ Dr Lowe told a Hobart dinner on Tuesday night.

‘High inflation devalues your savings. It worsens inequality in our society and it undermines our living standards.

‘It hurts us all by impairing the functioning of our economy.

‘It is for these reasons that the Reserve Bank board will make sure that this episode of high inflation is only temporary.’

Should ANZ and Westpac’s predictions of a 3.85 per cent cash rate come true, the average borrower would have seen their monthly repayments surge by $1,211 in a year – or 53 per cent. 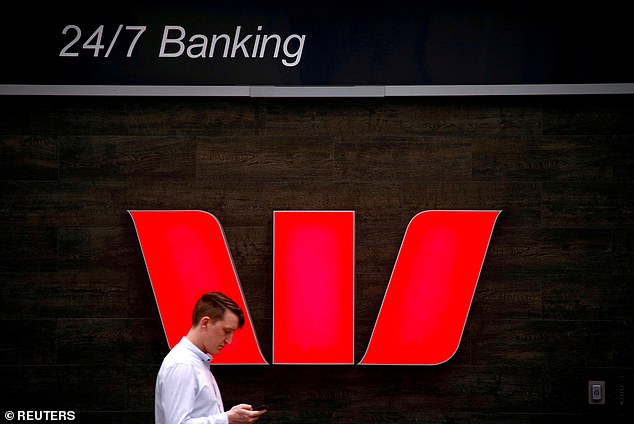 Westpac was last week expecting a 3.85 per cent RBA cash rate by March 2023 but chief economist Bill Evans on Tuesday afternoon amended those predictions to have the terminal cash rate being reached by May next year (pictured is a Sydney bank branch)

What the banks are expecting after November rate rise

Westpac was last week expecting a 3.85 per cent RBA cash rate by March 2023 but chief economist Bill Evans on Tuesday afternoon amended those predictions – now forecasting the cash rate will reach that point by next May.

‘Given that the board chose not to respond to the inflation shock with more than 25 basis points we can only conclude that as rates continue to rise the increments will be 25 basis points,’ he said.

ANZ’s head of Australian economics David Plank is also predicting a 3.85 per cent cash rate by May 2023, based on the idea the RBA will stick with 0.25 percentage point increases unless higher wages fuel more inflation.

‘It will be very difficult for the RBA to return to 50 basis point rate hikes unless clear evidence of a price-wage spiral emerges,’ he said.

The futures market is expecting the RBA cash rate to hit 3.85 per cent by July 2023.

Gareth Aird, the Commonwealth Bank head of Australian economics, said the full effects of this year’s rate rises were yet to kick in because many borrowers had last year fixed their mortgage rates at 2 per cent. 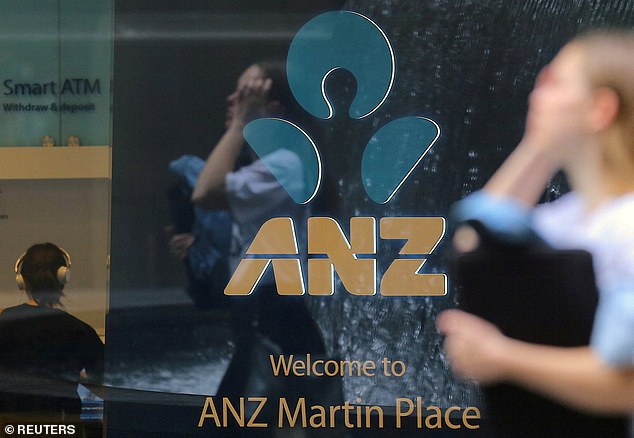 ANZ’s head of Australian economics David Plank is also predicting a 3.85 per cent cash rate by May 2023, based on the idea the RBA will stick with 0.25 percentage point increases unless higher wages fuel more inflation (pictured is a Sydney bank branch)

‘Far more borrowers than usual are on fixed rate mortgages, which blunts the initial impact of rate rises,’ he said.

‘They are generally on short dated fixed rate mortgages and the bulk of these loans will expire over the next year.

‘This in turns reduces the need to continue to take the policy rate higher and deeper into restrictive territory in 2023.’

The Commonwealth Bank is expecting rate cuts in the second half of 2023, including a 50 basis point easing towards the end of next year. 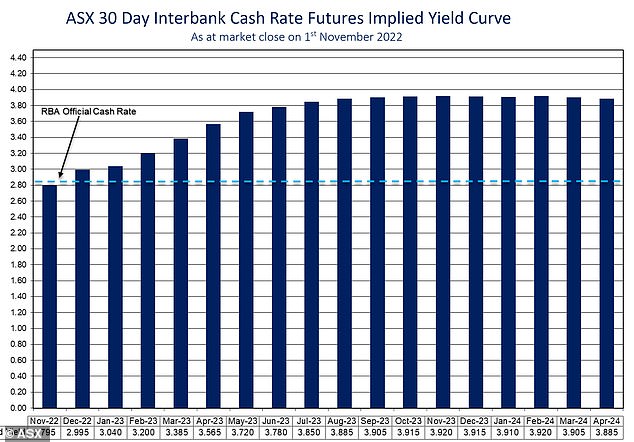 The futures market is expecting the RBA cash rate to hit 3.85 per cent by July 2023

NAB, Australia’s biggest business lender, is expecting 0.25 percentage point rate rises in December, February and March that would take the cash rate to 3.6 per cent.

Alan Oster, National Australia Bank’s chief economist, is expecting unemployment to rise from a near 48-year low of 3.5 per cent to 4.5 per cent in 2024, which would lead to rate cuts.

‘Slow growth, rising unemployment and easing global inflation pressures are likely to see the RBA begin to ease policy back towards a more neutral setting in 2024, with the cash rate expected to fall back below three per cent,’ he said.

Inflation in the year to September surged by 7.3 per cent – the fastest annual pace since the June quarter of 1990.

An 8 per cent inflation pace in the December quarter, as the RBA is predicting, would take it to highest level since the March quarter of 1990 when it reached 8.7 per cent.

The last time Australia had inflation above 8 per cent, the Reserve Bank had 17 per cent interest rates.

But 32 years ago, houses were much cheaper compared with incomes. 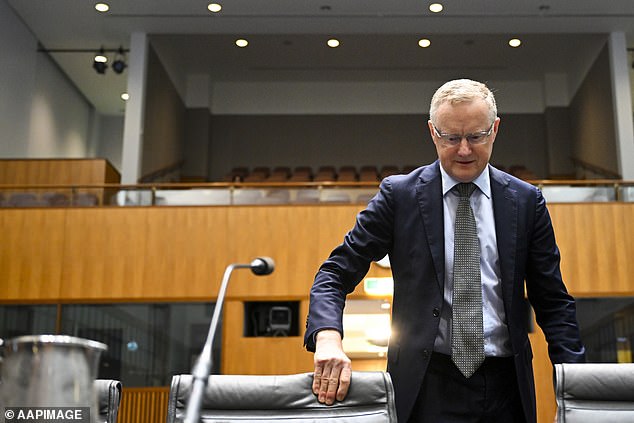 Reserve Bank Governor Philip Lowe is also expecting inflation to remain above the RBA’s 2 to 3 per cent target into 2024, which means more rate hikes

Recent rate rises have seen Sydney’s mid-point house price this year dive by 10.6 per cent to $1,257,625 but an average, full-time worker with a 20 per cent deposit and a $1million mortgage would owe the bank 10.9 times what they earn.

The Australian Prudential Regulation Authority considers a debt-to-income ratio of six or more to be risky.

Borrowers since May, with seven straight monthly rate rises, have been dealt with 2.75 percentage points worth of increases – equal to the 1994 level of monetary policy tightening. 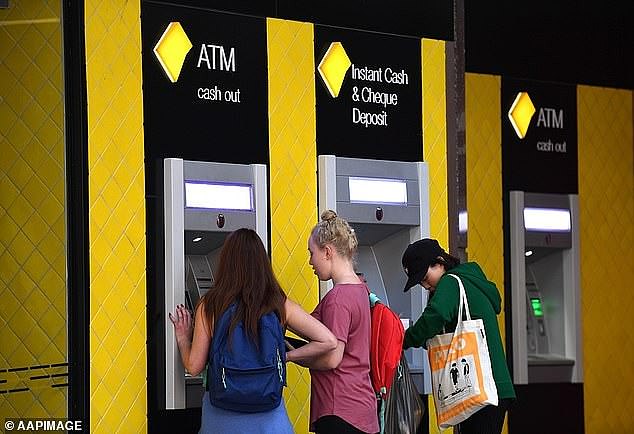 The Commonwealth Bank is expecting a 0.25 percentage point increase in December to be the last, taking the cash rate to 3.1 per cent. Gareth Aird, the Commonwealth Bank head of Australian economics, said the full effects of this year’s rate rises were yet to kick in because many borrowers had last year fixed their mortgage rates at 2 per cent

Another rate rise in December of 0.25 percentage points would be the most severe level of tightening in a calendar year since the RBA began publishing a target cash rate in 1990.

Westpac and ANZ’s predictions of a 3.85 per cent cash rate by May 2023 would mean 3.75 percentage points worth of rate increases in a year.

No bank would have been required to assess their level of increase in May 2022, which means more financial stress than anticipated and a fall in house prices as the lending capacity of the banks is constrained.