EXPRESS INFORMER > News & Politics > ‘Anyone but Sinn Fein’: Ireland’s Fianna Fail says it will form government with anyone but McDonald

Ireland’s largest party Fianna Fail has said it will try to form a government with anyone except Mary Lou McDonald’s nationalist Sinn Fein.

Party leader Micheál Martin told a meeting of his TDs (MPs) today that they could not seek a deal with the socialists because of the damage they would do to the country.

A source from the centre-right party told the Irish Independent there was ‘pretty unanimous support’ for Mr Martin’s decision.

Mr Martin made note of Waterford Sinn Fein TD David Cullinane’s shout of ‘up the Ra (IRA)’ at a party bash after last weekend’s election success. ‘The mask slipped,’ Mr Martin told his colleagues and revealed why Sinn Fein are not fit for office.

Sinn Fein Leader, Mary Lou McDonald speaks to the media as the newest members of the Sinn Fein Parliamentary Party meet for the first time at Leinster House in Dublin. Ms McDonald told reporters today it would be ‘very, very tricky to construct such a government’ 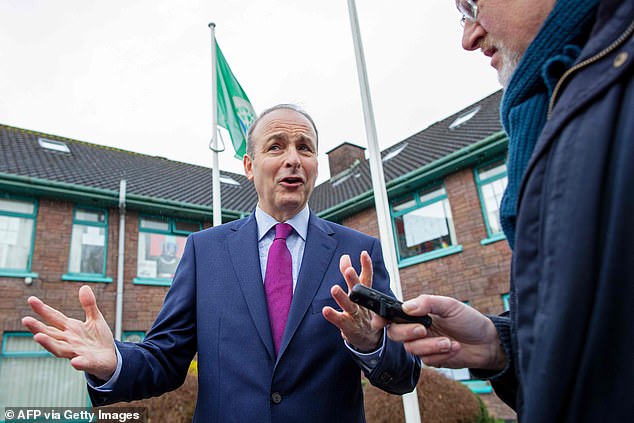 Leader of Ireland’s Fianna Fail party, Michael Martin, told a meeting of his TDs today that they would seek to form a government with anyone except Sinn Fein

Sinn Fein, Fianna Fail and the centre-right Fine Gael Party of Prime Minister Leo Varadkar each secured just under a quarter of the seats in the election, meaning it will be hard to form a government unless at least two of the three cooperate.

Mr Varadkar’s party, which has 35 seats in the 160-seat parliament, has already ruled out a deal with Sinn Fein, which is on 37. Fianna Fail has 38 seats.

Sinn Fein on Thursday effectively admitted it could not enter power without one of the two large parties, with Ms McDonald telling reporters it would be ‘very, very tricky to construct such a government.’

Fianna Fail’s rejection of Ms McDonald’s party raises the chances of Ireland being forced to go to the polls again in the coming months, a development analyst have said could further boost Sinn Fein, whose support surged 50% in last weekend’s election in part due to anger at a housing crisis.

Senior Fianna Fail lawmaker Niall Collins told Reuters after today’s meeting: ‘We gave the party leader licence to speak to whoever he needs to speak to, with the exception of a Sinn Fein.’

‘The party is fully behind the position’, he added.

Fine Gael and Fianna Fail have long shunned Sinn Fein, citing policy differences and the party’s historic links to the IRA, which fought British rule in Northern Ireland for decades in a conflict in which some 3,600 people were killed before a 1998 peace deal. 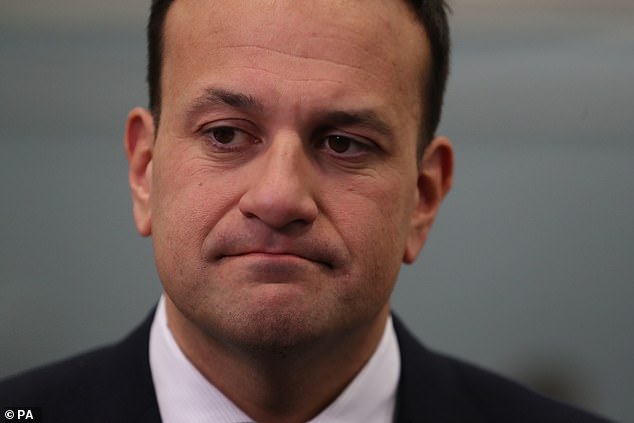 Taoiseach Leo Varadkar’s party has35 seats in the 160-seat parliament, behind Sinn Fein which has 37 and Fianna Fail which has 38

Both parties are also opposed to Sinn Fein’s high-spending promises, its pledge to scrap property tax and plans to hike income taxes on high earners they say would discourage foreign multinationals that employ one-in-ten Irish workers.

Surveys showed that voters rejected the traditional parties over the campaign issues of healthcare and the high cost and low availability of housing, won over by Sinn Fein’s high-spending promises and a pledge to freeze residential rents.

Asked what the most likeliest government was now, Mr Collins said ‘who knows, it may not be possible’ to form a government.

Asked if Fianna Fail would talk to Fine Gael about the formation of a government, Mr Collins said, ‘That wasn’t really discussed.’

One source told The Independent: ‘The general consensus is Sinn Fein out, out, out and we’ve given a mandate to our leader to enter into talks with other parties, particularly the Greens and Social Democrats.

‘There was no appetite to go in with Fine Gael … He’s got a mandate. There’s no rush.’

Some Fianna Fail lawmakers suggested the party could lead a minority government similar to the previous administration Mr Varadkar led via a co-operation deal with Fianna Fail, then the main opposition party.

But Foreign Minister Simon Coveney of Fine Gael repeated his personal view that another minority government was not a good idea after both parties suffered in the election.

Another such arrangement between Fine Gael and Fianna Fail would allow Sinn Fein to continue to build in opposition, Coveney told national broadcaster RTE.