Exiled NFL star Antonio Brown knows his decision to storm off the field against the Jets, which cost him his contract with the Tampa Bay Buccaneers, was ‘unnecessary and unprofessional’.

Brown has a history of disciplinary issues having been on multiple teams but the Bucs drew the line after he ejected himself from the game against the Jets earlier this month.

In the third quarter of the Jets game, following an argument with head coach Bruce Arians and heated discussions with team-mates, Brown, 33, bolted from the sidelines and removed his jersey before jogging off the field.

‘It probably wasn’t necessary or professional,’ Brown admitted to TMZ on Monday, having headed to Los Angeles to hang out with music artist Kanye West.

As league and Tampa officials were left stunned at his latest on-field outburst, Brown chose to stay in, rather than out, of the limelight by partying in New York City.

Brown was seen with rappers Meek Mill and Fabolous just 24 hours after his release from the Bucs. 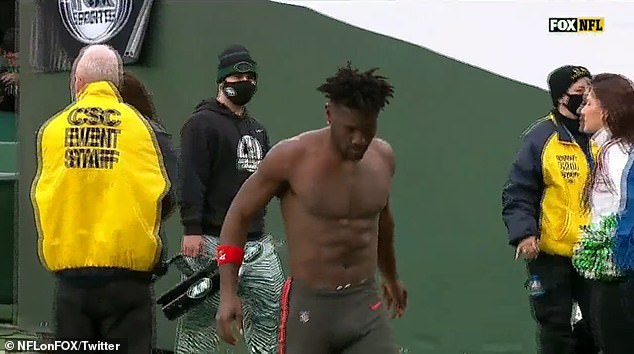 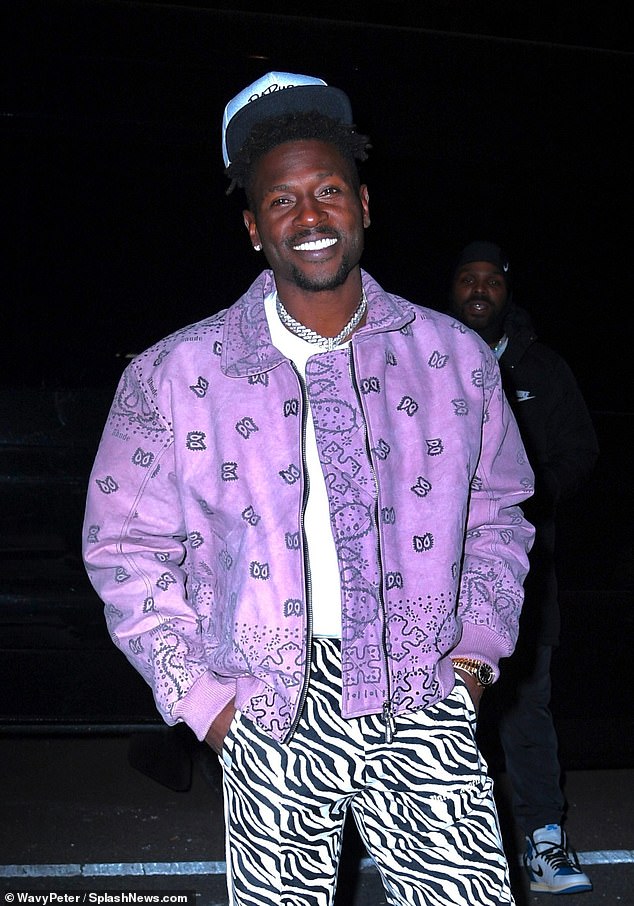 The fall-out has been nasty since Brown’s release with the receiver having accused the Bucs and Arians of giving him a ‘powerful and sometimes dangerous painkiller’ ahead of the Sunday’s win over the Jets.

In a statement issued via his lawyer on Wednesday, Brown said that he was forced to play despite team officials knowing he had a serious ankle injury.

Brown said that at one point the pain from the injury became too extreme, forcing him to sit on the sidelines. He claims that then triggered a confrontation with Arians, which saw the coach make a throat cutting gesture while mouthing ‘You’re done.’

The exit from the field happened shortly afterwards, Brown claims.

The divisive seven-time Pro bowler has also since looked to bring into question his friendship with quarterback Tom Brady during an interview with the Full Send Podcast. 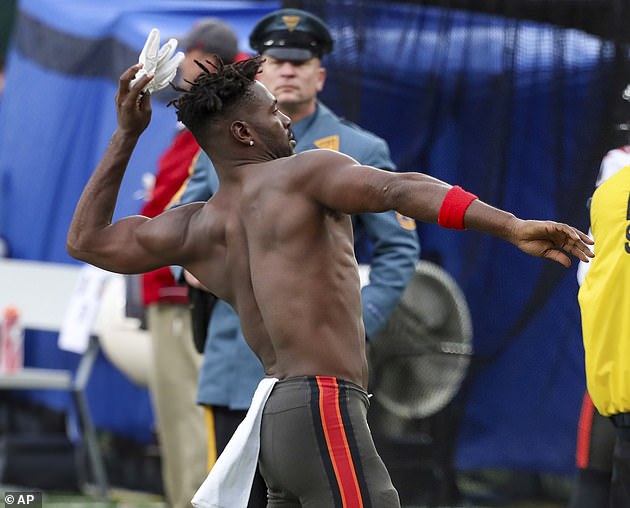 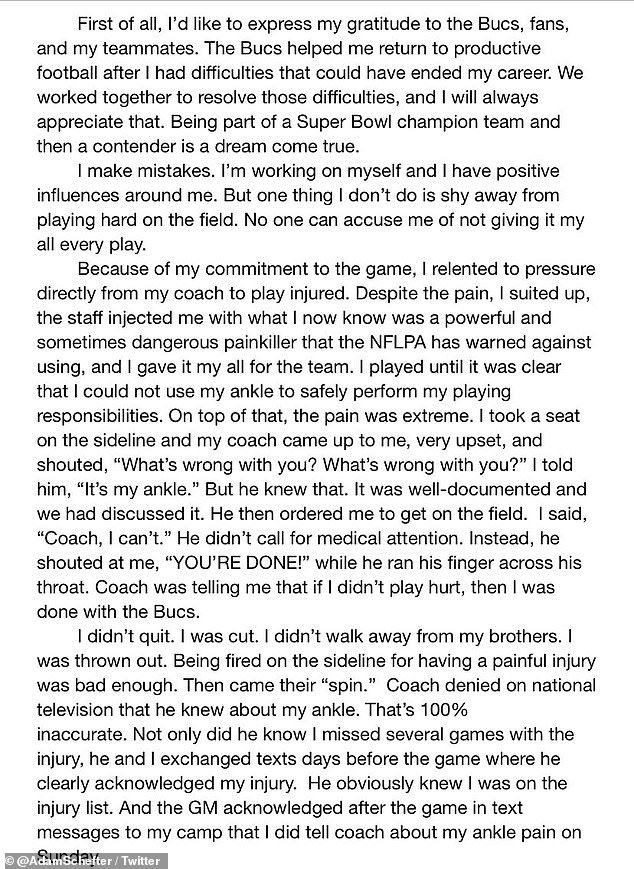 Through his attorney, Brown released a statement explaining his exit from the Jets game 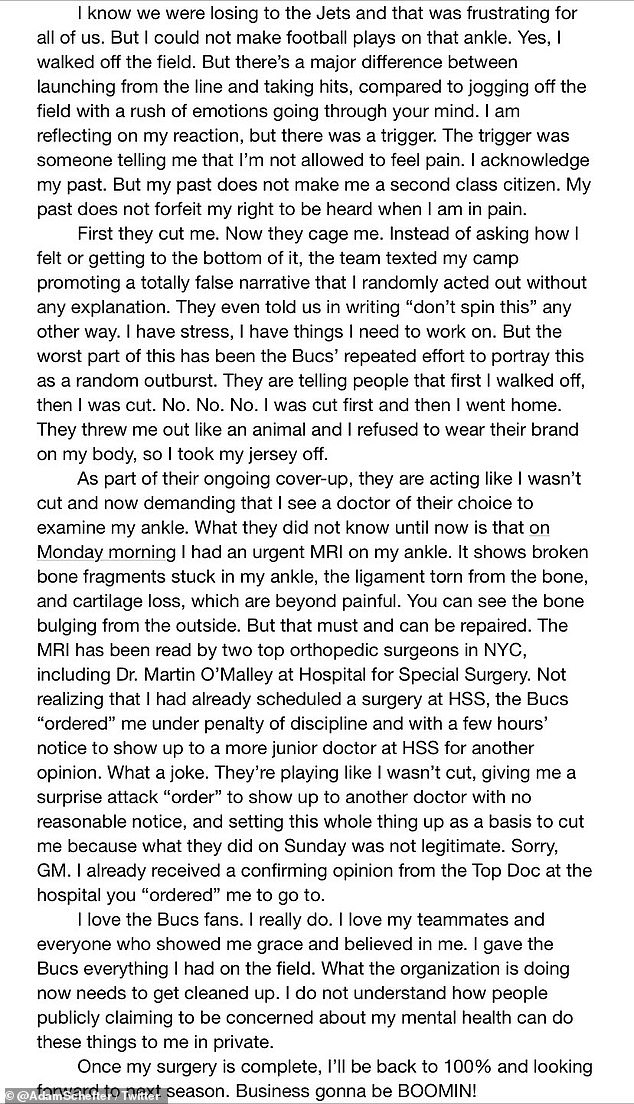 ‘To me, a friend is someone who’s got your back,’ Brown said. ‘Not everybody in sports is going to be your friend.

‘Tom Brady’s my friend, why? Because I’m a good football player. He needs me to play football. People have different meanings of what friendship is.’

Brady had previously been credited with reviving Brown’s career at two clubs: first, in New England, where the embattled NFL star played a single game in 2019 before getting released amid sexual assault allegations; and then in Tampa, where the pair won a Super Bowl last season.

Brown even lived with Brady in Tampa for a short time as they prepared for the 2020 season.

Brown’s younger brother, former University of Pittsburgh running back Desmond Brown, called his older sibling ‘selfish’ for quitting on his teammates, and suggested that he may have been upset over a contract issue. The elder Brown was approaching three incentive targets, which could have netted him just shy of $1 million in bonuses.

‘… he wanted to get those incentives and realized it wasn’t going to happen,’ Desmond told the Daily Caller.

The Bucs have one more regular season game remaining, and Brown needed 11 more catches as well as an additional 281 receiving yards and three touchdowns to reach all three targets for $999,000 in bonuses.

Desmond also wondered if ‘something happened in the locker room’ at halftime to upset Brown.

Regardless, Desmond said his brother’s exit was ‘a real selfish move,’ adding that ‘there’s no honor in quitting.’