Human lifespans could be lengthened by an anti-ageing jab within five years, say researchers.

A ‘breakthrough’ study showed that the experimental therapy rejuvenated cells in mice, helping them live longer, while reducing frailty and boosting heart and lung health.

Anti-ageing scientists hope the ‘exciting’ findings will open up the door to treating humans in the same way, boosting their resilience against diseases like cancer and dementia by making them biologically younger.

Experts believe that by 2028, people may be able to access a similar treatment that they hope could ease the burden on health and social care.

The Office for National Statistics predicts the life expectancy of men born in 2070 in the UK will reach the age of 85 on average, while women will be nearly 88 when they die 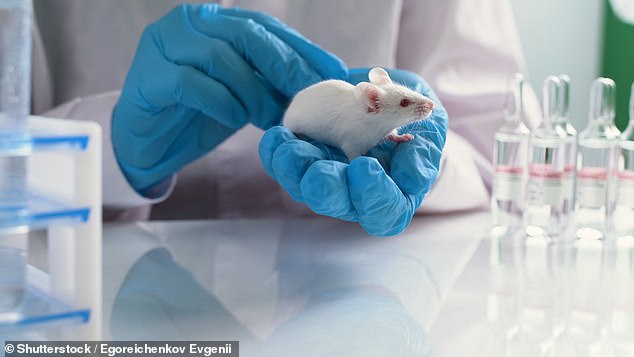 Lifespans could be lengthened by an anti-ageing drug within five years, researchers believe (stock image)

Dr Noah Davidsohn, chief scientist for Rejuvenate Bio, the company behind the study, told The Times: ‘We could easily see something in humans in the next five years with this technology.’

However, this does not necessarily increase the number of healthy years lived — as the elderly continue to suffer age-related illness, just over a longer timescale.

But age reversal would, in theory, undo the effects of ageing on a cellular level, boosting lifespan and the number of healthy years lived.

To get to the bottom of whether this could be achieved, the team studied mice aged 124 weeks —  equivalent to a person aged around 77.

Every fortnight, half of the mice got a placebo jab, while the other half were injected with the therapy — a modified virus carrying additional pieces of genetic code.

The mice that received the treatment produced Yamanaka factors — a set of proteins that have been used since the mid-2000s to reverse cell ageing, effectively returning them to a ‘younger’ state.

The findings, published on pre-print website bioRxiv, showed that mice receiving the treatment lived for another 18.5 weeks, 142.5 weeks in total, compared with 8.9 weeks (133 weeks in total) among those that did not.

As well as living for longer, the mice that were jabbed with pieces of genetic code stayed healthier for longer, according to the study, which is yet to be peer-reviewed.

They scored lower on frailty tests, while their heart and liver health were also booster, results show.

This suggests ‘increased lifespan correlated to overall better health of the animals’, the researchers said.

In a separate experiment, human skin cells were exposed to the gene therapy.

Results showed the cells appeared younger following treatment, suggesting that the therapy can ‘reverse biomarkers of ageing in human cells’.

Overall, the findings provide ‘cautious optimism’ that ‘rejuvenation therapy can be safely delivered to humans’, the researchers said.

However, they noted that large animal studies are the next step needed to confirm the safety and effectiveness of the approach.

Dr Steven Austad, an ageing researcher at the University of Alabama at Birmingham, told Science that the findings could be a ‘breakthrough’.

However, he noted that they will first need to be replicated in larger studies.

Dr Ildem Akerman, an associate professor in functional genomics at Birmingham University, told The Times that the findings were ‘potentially very exciting’.

She said: ‘Reversal of ageing in an entire animal with the use of gene programming has not been achieved before.’

Professor Ilaria Bellantuono, co- director of the healthy lifespan institute at Sheffield University, told the newspaper that the lower rates of frailty among treated mice were encouraging.

Lowering the prevalence of frailty could dramatically ease the burden on the NHS and social care, Professor Bellantuono added.

Dr Andrew Steele, a British computational biologist and author of a new book on longevity, previously told MailOnline there is no biological reason humans can’t reach the age of 200.

He believes the big breakthrough will come in the form of drugs that remove ‘zombie cells’ in the body, which are thought to be one of the main culprits of tissue and organ decay as we age.

Pills that flush these cells out of the body are already in human trials in and could be on the market in as little as 10 years, according to Dr Steele, who believes someone reading this could make it to 150 with the help of the drugs.

Another field in particular that piques the interest of anti-ageing scientists is the study of DNA of reptiles and other cold-blooded animals.