Anthony Albanese has announced Labor’s climate change policy which he will take to the Australian public at next year’s election.

The policies will reduce emissions by 43 per cent by 2030, a slightly less ambitious target than Bill Shorten’s 45 per cent aim which Mr Albanese called a ‘mistake’ earlier this year.

Labor has announced a target to reduce emissions by 43 per cent by 2030. Pictured: Mr Albanese with a hydrogen car on Wednesday

The Coalition’s target is to reduce emissions by 26-28 per cent below 2005 levels, although latest projections show the nation is on track for a 30-35 per cent reduction.

Labor’s plan involves a $20billion upgrade of the electricity grid to improve transmission, rolling out 85 solar banks and 400 community batteries around the nation and investing in 10,000 ‘new energy apprentices’ alongside a $10million New Energy Skills Program.

A future Labor government would also spend $3billion on renewables manufacturing and deploying low-emissions technologies and remove taxes on electric cars to make them cheaper.

‘The plan is fully costed and we have released the modelling today. This is the most comprehensive modelling ever done for any policy by any Opposition in Australia’s history since Federation.’ 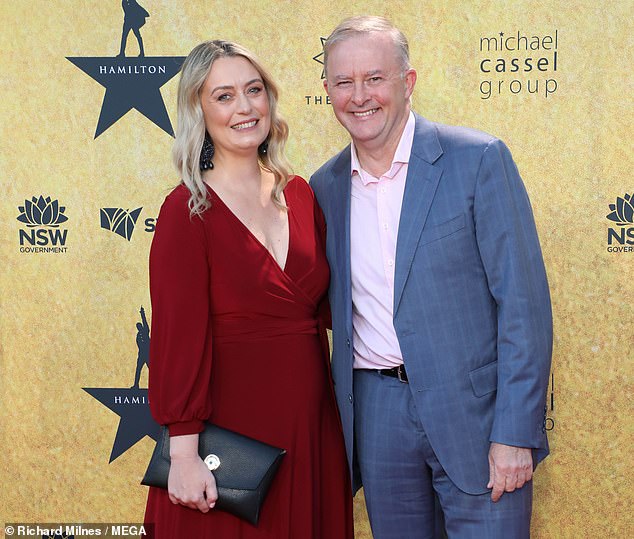 Mr Albanese (pictured with partner Jodie in March) said his plan will create 604,000 jobs and slash average household energy prices by $275 a year by 2025

Mr Albanese said five out of every six new jobs created under the plan will be in regional Australia. Some 64,000 are direct jobs while 540,000 are indirect jobs created as a side-effect of the policies.

But it will increase the share of renewables in the National Electricity Market to 82 per cent by 2030.

Mr Albanese said having a ‘credible’ climate policy that will please allies including the US was crucial.

‘We see climate change as a national security issue,’ he said.

‘We think that one of the ways in which we engage in the Indo Pacific and with our neighbours and in the globe is by having a credible climate change policy.

‘If you ask people in the US administration at the moment about Australia’s contribution, the truth is they are scathing of because Australia is sitting back, one of the few countries that refused to increase any of its ambitions going forward.’

The Labor leader said the Coalition had failed to take action on climate change for eight years.

‘This is the Government that is frozen in time while the world warms around it,’ he said.

Labor’s policy document says it will spend $100 million to deliver an initial 85 solar banks around Australia.

That will mean some 25,000 households that are unable to install rooftop solar can access solar energy.

‘The success of this initiative will spark additional private investment to deliver solar to even more homes,’ the document says.

• Upgrade the electricity grid to fix energy transmission and drive down power prices.

• Adopt the Business Council of Australia’s recommendation for facilities already covered by the Government’s Safeguard Mechanism that emissions be reduced gradually and predictably over time, to support international competitiveness and economic growth – consistent with industry’s own commitment to net zero by 2050.

• Protect the competitiveness of Emissions Intensive Trade Exposed industries by ensuring they will not face a greater constraint than their competitors.

• Roll out 85 solar banks around Australia to ensure more households can benefit from rooftop solar.

• Install 400 community batteries across the country.

• Demonstrate Commonwealth leadership by reducing the Australian Public Service’s own emissions to net zero by 2030.

• Work with large businesses to provide greater transparency on their climate related risks and opportunities.

• Re-establish leadership by restoring the role of the Climate Change Authority, while keeping decision-making and accountability with Government and introducing new annual Parliamentary reporting by the Minister.

Greens leader Adam Bandt, who wants a 75 per cent reduction by 2030, said Labor was becoming less ambitious when urgent action is needed to save the planet.

‘Labor has given up on climate. The climate crisis is getting worse but Labor is going backwards,’ he said.

In October Scott Morrison announced an historic commitment to net zero carbon emissions by 2050 in a bid to tackle global warming. 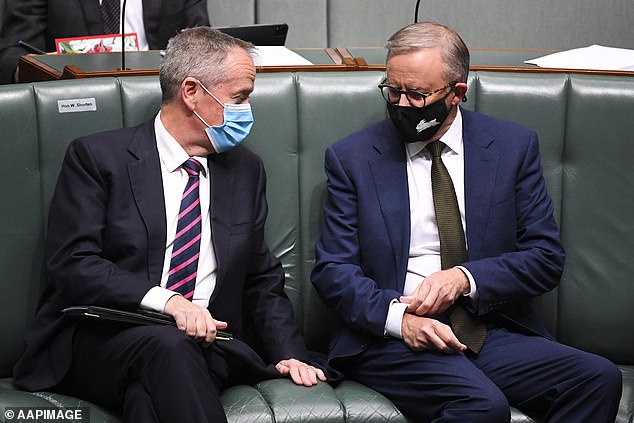 The key climate change policy is only slightly less ambitious than Bill Shorten’s 45 per cent target which leader Anthony Albanese called a ‘mistake’ earlier this year. Pictured: Mr Albanese and Mr Shorten in the House on Thursday

He said Australia can reach net zero emissions by relying on technology such as solar power and green hydrogen and without introducing any taxes – but he did not announce any new initiatives or funding.

‘The Prime Minister announced a vibe rather than a target,’ Mr Albanese said, criticising the Government for not legislating the net zero goal.

‘Code Red for humanity’: Doomsday UN report says global warming is ALREADY causing extreme weather and the world will heat up by 1.5C by 2040 – a decade earlier than forecast

The Earth is likely to warm by 1.5C within the next 20 years — a decade earlier than previously expected — and heatwaves, flooding and droughts will become more frequent and intense, a bombshell United Nations report dubbed a ‘code red for humanity’ warned in August.

Scientists had expected temperatures to rise by 1.5C above pre-industrial levels between 2030 and 2052 but now believe it will happen between this year and 2040.

The world’s largest ever report into climate change also said it was ‘unequivocal that human influence has warmed the atmosphere, oceans and land’.

Since 1970, global surface temperatures have risen faster than in any other 50-year period over the past 2,000 years, the authors said, while the past five years have been the hottest on record since 1850. 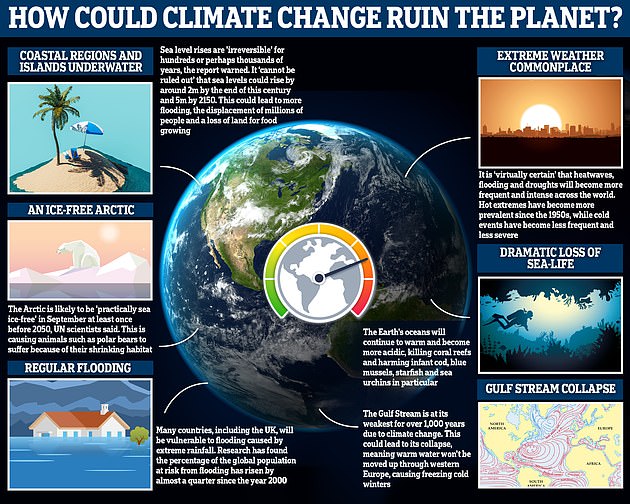 If temperatures continue to rise, there could be devastating effects here on Earth, including a dramatic loss of sea-life, an ice-free Arctic and more regular ‘extreme’ weather 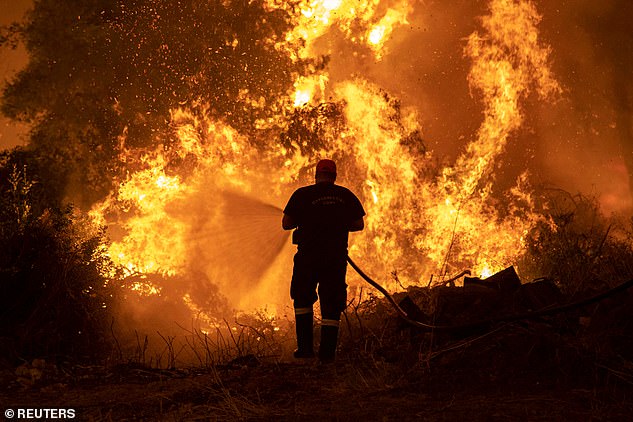 Climate change: The bombshell UN report comes as record heatwaves, wildfires and floods hit countries around the world. A firefighter is pictured above trying to extinguish a wildfire burning on the island of Evia, Greece in August

‘It’s just guaranteed that it’s going to get worse,’ said report co-author Linda Mearns, a senior climate scientist at the US National Center for Atmospheric Research. ‘I don’t see any area that is safe… Nowhere to run, nowhere to hide.’

It comes as record heatwaves, wildfires and floods hit countries around the world.

A blistering heatwave killed hundreds of people across the west coast of the US and Canada earlier this summer, while more than 300 died and almost 13 million others were affected by floods that engulfed Henan province in China at the end of July.

The 1.5C mark is considered to be the point where climate change becomes increasingly dangerous. The 2015 Paris Agreement on climate change committed countries to limiting warming to 1.5C but they have already risen by 1.2C. 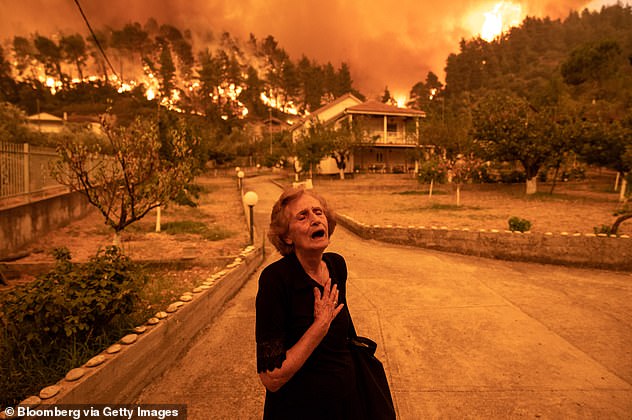 Smoke blotted out the skies on the Greek island of Evia in August as fires that have been burning out of control entered their seventh day, with locals forced to watch helplessly as their livelihoods went up in smoke

UN Secretary-General António Guterres called the new report a ‘code red for humanity’. He warned: ‘The alarm bells are deafening, and the evidence is irrefutable: greenhouse gas emissions from fossil fuel burning and deforestation are choking our planet and putting billions of people at immediate risk.’

The key findings of the report are:

However, some experts say there is still hope that cuts in emissions of greenhouse gases could stabilise rising temperatures.

Scientists involved in the report said the 1.5C or 2C thresholds are not cliff edges the world will fall off, but that every bit of warming makes a difference, so it is important to curb temperature rises as much as possible.

Professor Richard Betts, from the Met Office Hadley Centre and a contributing author to the report, said: ‘Like the speed limit on a motorway, staying below it is not perfectly safe and exceeding it does not immediately lead to calamity, but the risks do increase if the limit is passed.

– It is ‘unequivocal’ that human activity has warmed the atmosphere, ocean and land – with widespread and rapid changes across the world.

– Many of the changes are unprecedented over many centuries to many thousands of years, with the world warming at a rate unprecedented in at least 2,000 years.

– Global average temperatures were nearly 1.1C higher in the last decade than in pre-industrial times, or the period 1850-1900, driven by emissions caused by human activities such as burning fossil fuels and deforestation.

– Human-caused climate change is already affecting many weather and climate extremes in every region around the world, with stronger evidence of more frequent or intense heatwaves, heavy rain, droughts and tropical cyclones and the role humans play in driving the changes.

– Humans are very likely the main driver of the global retreat of glaciers, decline in sea ice, warming oceans and rising sea levels. The rate of sea level rise is speeding up.

– Global surface temperatures will continue to increase until at least mid-century, and the world will reach or exceed 1.5C of warming over the next 20 years.

– Global warming of 1.5C and 2C – limits countries have committed to in order to avoid the most dangerous impacts of climate change – will be exceeded in the 21st century unless deep reductions in carbon dioxide and other greenhouse gas emissions occur in the coming decades.

– Continued warming will drive increases in the frequency and intensity of hot extremes, marine heatwaves, heavy rain, droughts in some regions, the proportion of intense tropical cyclones, and reductions in Arctic sea ice, snow cover and permafrost.

– Every additional increment of warming causes larger changes in extremes, with every extra 0.5C temperature rises leading to clear increases in the intensity of heatwaves, heavy rain that can cause flooding, and droughts.

– Under scenarios for the future with increasing carbon dioxide emissions, the ocean and land carbon sinks such as forests are projected to be less effective at slowing the accumulation of the greenhouse gas in the atmosphere.

– Changes to oceans, sea levels and melting permafrost and glaciers are irreversible for decades, centuries or even millennia as a result of past and future warming.

– Strong, rapid and sustained reductions in emissions of methane would help curb warming, and would also improve air quality