Anthony Albanese has visited war-torn Ukraine on the heels of the NATO summit to survey the horrific damage caused by Russian forces.

The Prime Minister was tailed closely by Australian and the Ukrainian security teams as he was escorted through Bucha, Irpin and Hostomel, north-west of Kyiv.

Russian soldiers are accused of carrying out a long list of war crimes in the area with several bloody massacres of innocent civilians as well as systematic rapes.

Anthony Albanese has visited war-torn Ukraine on the heels of the NATO summit to survey the horrific damage caused by Russian forces (pictured, Mr Albanese surveys damage in Irpin)

Kyiv Governor Oleksiy Kuleba wrote on Facebook Sunday night that Mr Albanese was taken aback by the devastation he had witnessed.

‘He was shocked by what he saw: destroyed civilian houses, traces of mines, destroyed Antonov airport,’ Mr Kuleba wrote.

He added that the Prime Minister said Australia ‘supports Ukraine and advocates fair punishment for the crimes that have taken place here’.

Mr Kuleba said he was ‘grateful to the (Australian) delegation for their personal visit to the Kyiv region.

‘The war in Ukraine, in the centre of Europe, must remain in the world agenda.’

Mr Albanese’s visit to Ukraine was a side trip on his way home from Paris on Sunday.

The trip followed an invitation in June from Ukraine’s ambassador to Australia, Vasyl Myroshnychenko, to Mr Albanese to visit the nation’s capital Kyiv.

Speaking in front of world leaders in Madrid at the largest NATO summit ever held, Mr Albanese said the invasion was ‘brutal, illegal and unjustified’. 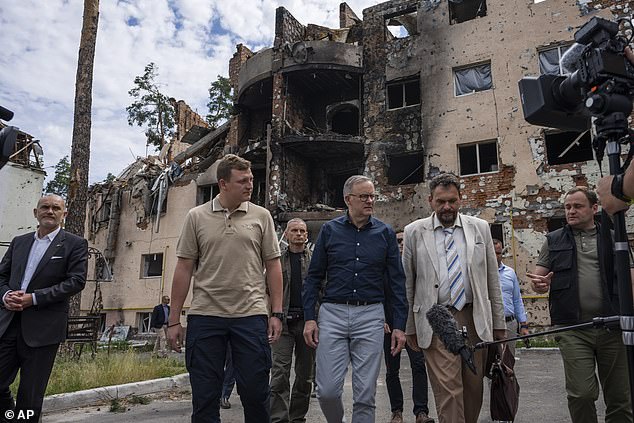 Australian Prime Minister Anthony Albanese, centre, listens to a translator, during his visit to Irpin, on the outskirts of Kyiv, Ukraine, Sunday, July 3, 2022

He said the West’s united front against Russia and the fallout from the war was a warning to China and its increasingly aggressive stance in the Pacific.

During his Europe visit, Mr Albanese indicated Australia would look to re-establish a diplomatic presence in Ukraine.

Australian embassy staff have been working from neighbouring Poland since the Ukraine crisis began.

On Australian Defence Force advice there was a total media blackout for the duration of Mr Albanese’s trip to Ukraine.

Though he had repeatedly said in the past week that he had been invited to go there, he did not say if he would be able to make the journey or not. 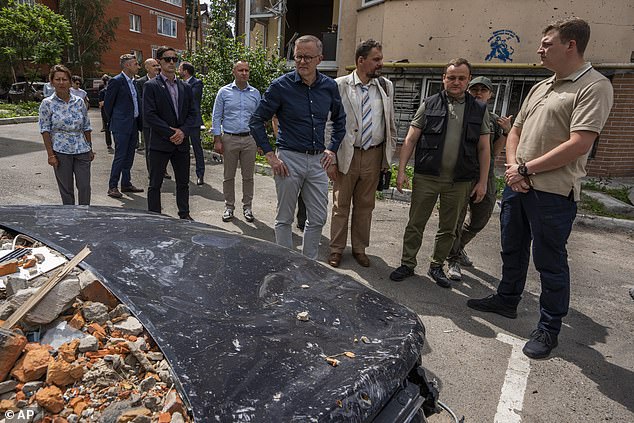 The Australian media was instructed not to report on it until the Prime Minister was back in Poland, but foreign media and the governor of Kyiv revealed the visit.

The airspace over Ukraine has been closed since the invasion began on February 24, and the roads into Kyiv are mostly impassable due to heavy fighting.

On Sunday, Russian troops continued to attack the eastern city of Lysychansk and missiles killed dozens across the country.

‘The war is not over,’ he said. ‘Unfortunately, its cruelty is only increasing in some places, and it cannot be forgotten.’

Mr Albanese is expected back in Australia on Tuesday.