A heated conversation between Anthony Albanese and Dom Perrottet has ended in the Prime Minister demanding the NSW Premier tear down a sign at Sydney’s Allianz Stadium that says ‘Home of the Sydney Roosters’.

The pair were filmed at a charity cricket game at Kirribilli House on Thursday where Mr Albanese voiced his anger at the Roosters’ signage being allowed on the new $900 million ground developed by state Liberal Government.

The Labor PM is a life member of the Roosters’ rivals, the South Sydney Rabbitohs, who had planned to share the plush new 65,000 stadium with the eastern suburbs’ club when the project was under construction.

But after the Rooster’s and the NSW Government came to a $12.5 million agreement for a high-performance centre at the venue, South Sydney opted to stay at Accor Stadium in Homebush.

Many Souths fans however still see the Moore Park ground – located in South Sydney – as their spiritual home.

The charity match the pair were a part of was organised by radio duo Fitzy and Wippa.

Mr Albanese and Mr Perrottet were on opposing sides of the charity match when conversation turned to the sign which has recently been covered by A-League soccer side Sydney FC.

‘It’s got a Roosters sign, how have they done that?’ Mr Albanese said in the conversation filmed by The Daily Telegraph.

The Premier and Fitzy shared a laugh but the Prime Minister did not seem amused saying, ‘No, tear it down!’ 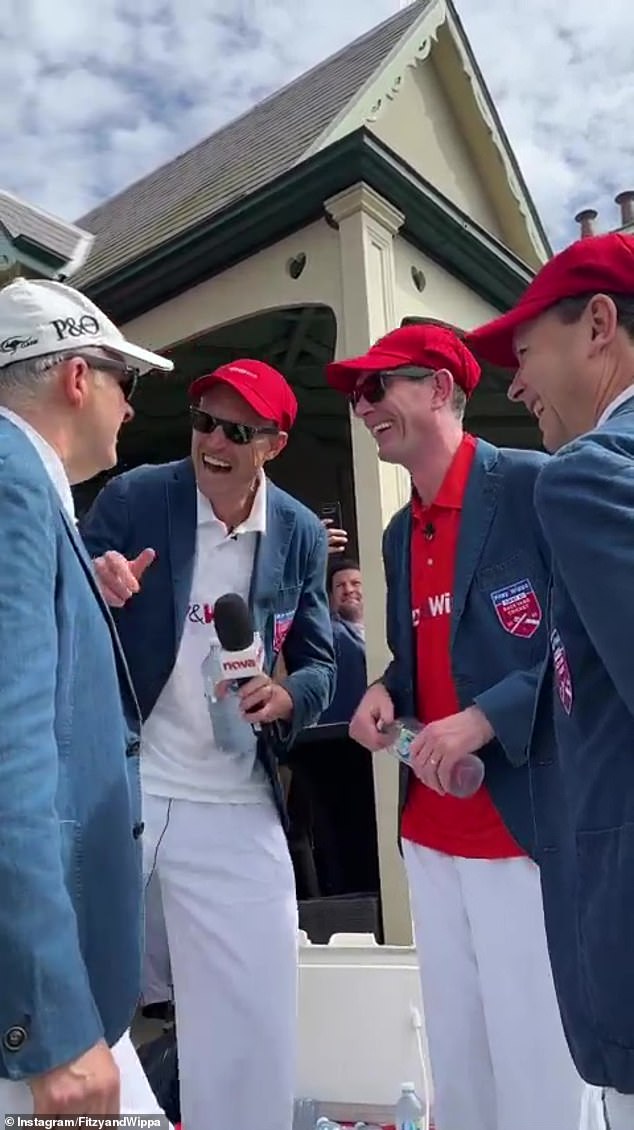 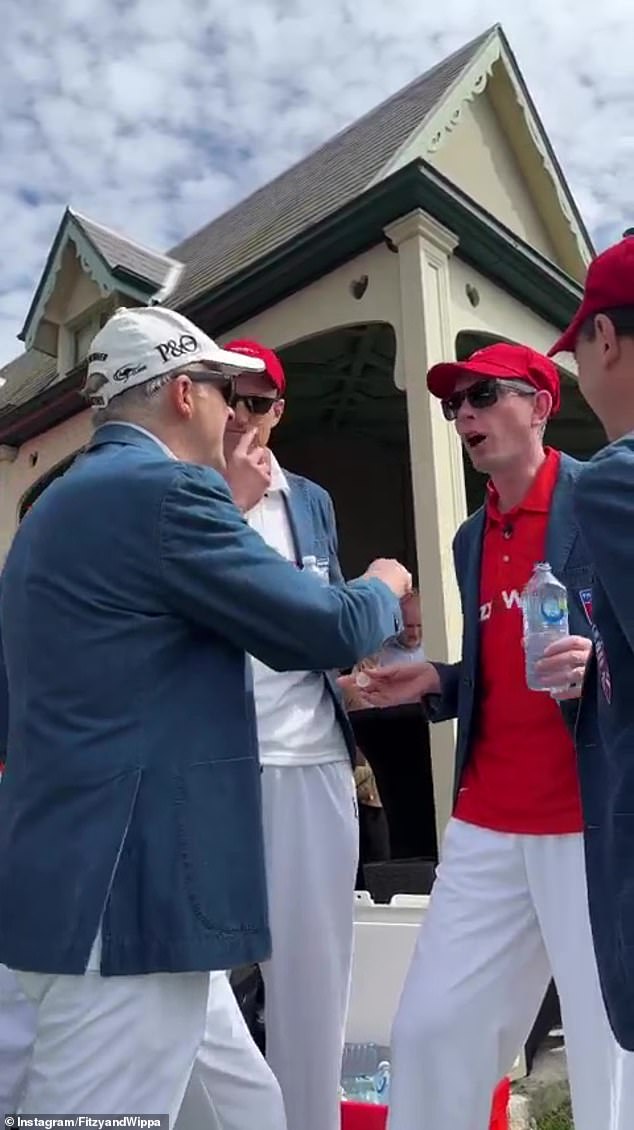 Mr Perrottet realising Mr Albanese was dead serious backed down saying, ‘I don’t want it to be an exclusive ground …. We can tear it down.’

Chairman of Venues NSW Tony Shepherd said he was ‘surprised and disappointed’ by the conversation between the pair and said the removal of the sign would be a ‘serious breach of contract’.

‘They are paying land rent on those facilities … that helps us then to pay the operating costs,’ he said.

The Prime Minister was part of ‘Team Fitzy’ along with Mark Ferguson, Colin Fassnidge and Mel McLaughlin.

At one point during the cricket game The Prime Minister was overheard trash talking the NSW Premier, calling his bowling ‘pretty average’.

Anthony Albanese has taken to the lawns of Kirribilli House to play some backyard cricket – and in the process has mercifully ended the record of Aussie Prime Ministers embarrassing themselves with bat and ball in hand.

Mr Albanese was taking part in ‘Fitzy and Wippa’s Backyard Cricket game’ at the official Prime Minister’s residence in Kirribilli in the shadows of the Sydney Harbour Bridge.

The Prime Minister headed up one team with Fitzgerald, while NSW Premier Dominic Perrottet captained the other alongside Wipfli. 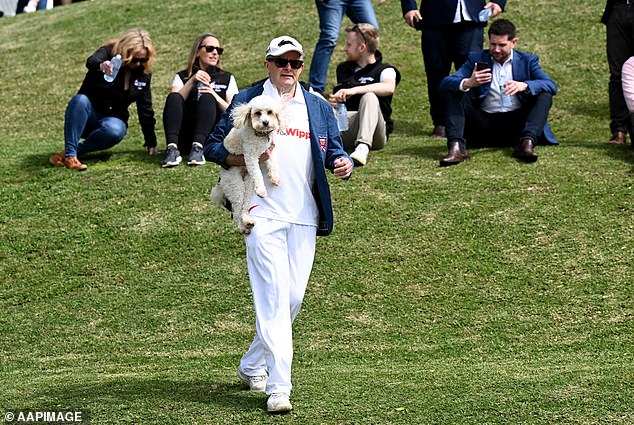 Prime Minister Anthony Albanese carries the ‘First Dog’, Toto, onto the field during a game of backyard cricket at the official residence at Kirribilli House

Mr Albanese faced the prospect of humiliating himself like previous Aussie Prime Ministers who very much fell into the ‘can’t bowl, can’t throw’ category – as the late Shane Warne would say.

Former PM John Howard’s humiliating attempt at bowling in India remains a source of national shame, while Bob Hawke famously had his glasses shattered when he failed to handle a short ball in a politicians game.

The new Prime Minister feared he would follow in those footsteps.

‘Let me say, as a cricketer, I make a good politician,’ Mr Albanese said in a pre-game interview.

He needn’t have worried. The Prime Minister smashed a double-hopper from Mr Perrottet out of the park with a cross-batted swipe that channeled David Warner – and no doubt he would have been happy to cop the ‘six and out’. 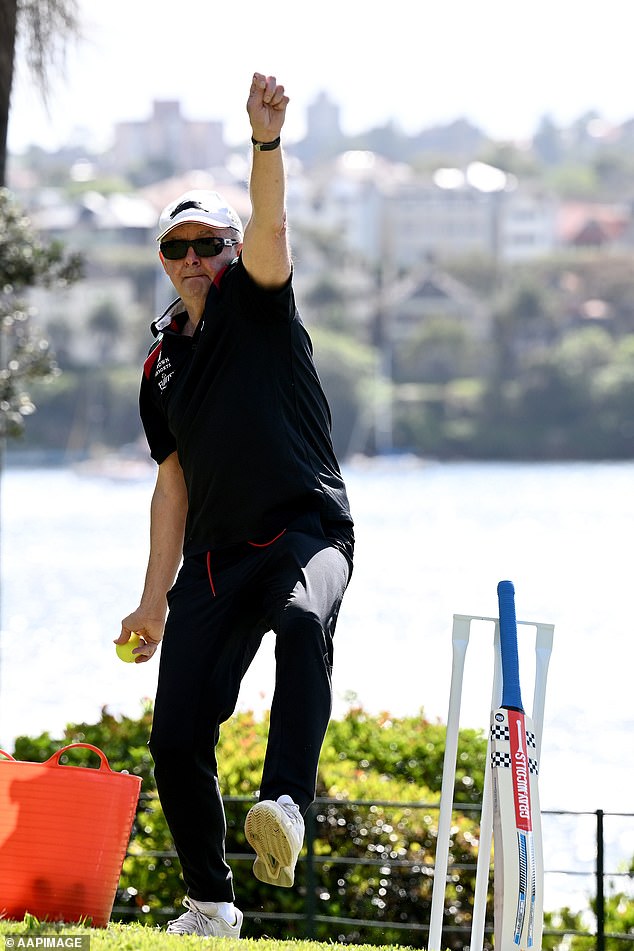 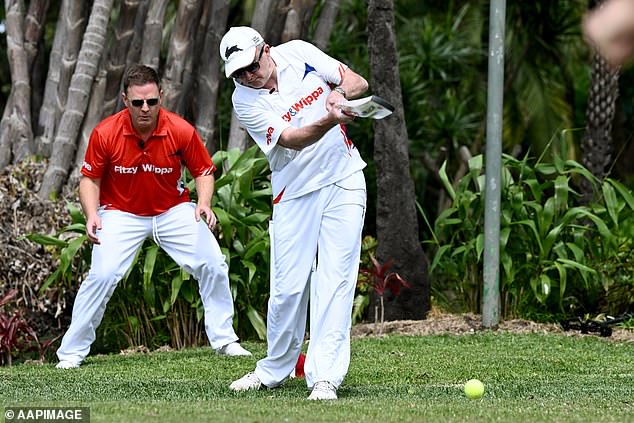 Mr Albanese might have looked slightly unorthodox on occasion, but managed to strike the ball with good power 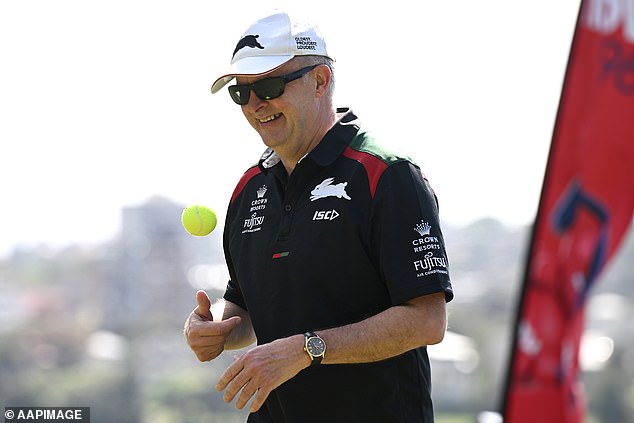 Mr Albanese was wearing the merchandise of his beloved NRL club, the South Sydney Rabbitohs 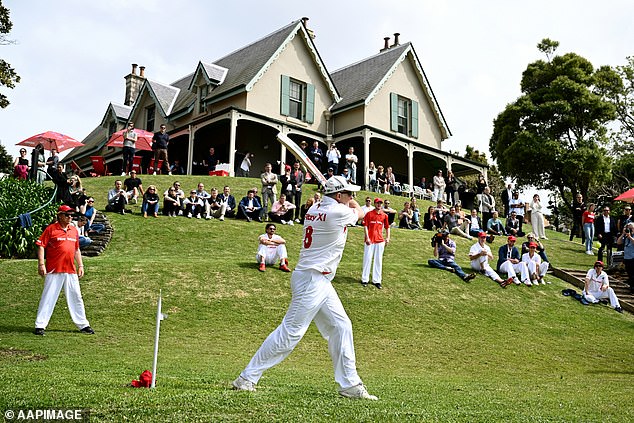 Mr Albanese was even better with ball in hand, with his somewhat mechanical action producing decent results.

His skills even filtered down to the Prime Minister’s ‘First Dog’, Toto.

Mr Albanese said on an Instagram Story prior to the start of the match he was confident she would be the ‘man of the match’, ‘because she is very good at chasing balls’.

He had to stop the game on one occasion, when the enthusiastic Cavoodle couldn’t help but sprint onto the pitch as the ball was bowled. 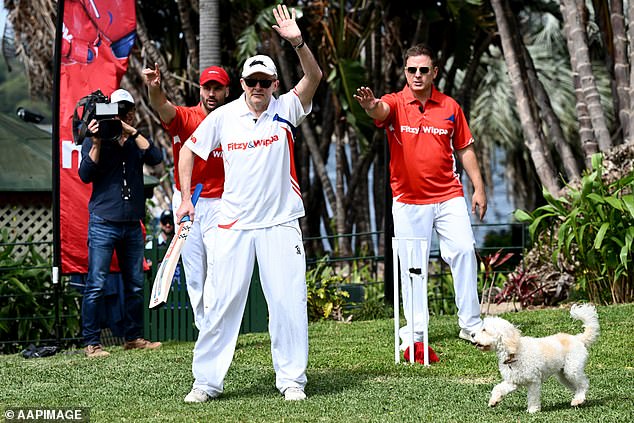 DOG ON THE PITCH! The Prime Minister interrupts the match as the ‘First Dog’, Toto, streaks through the game 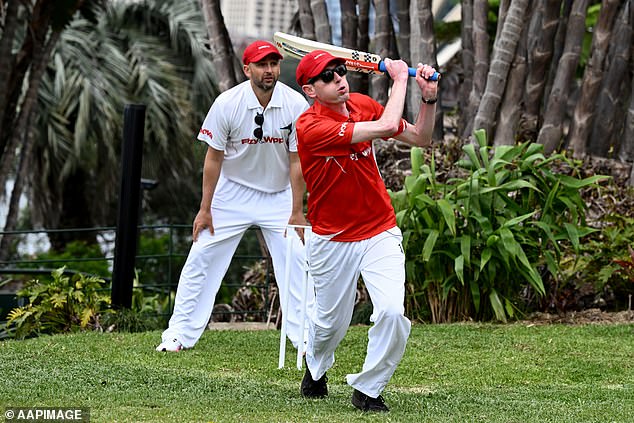 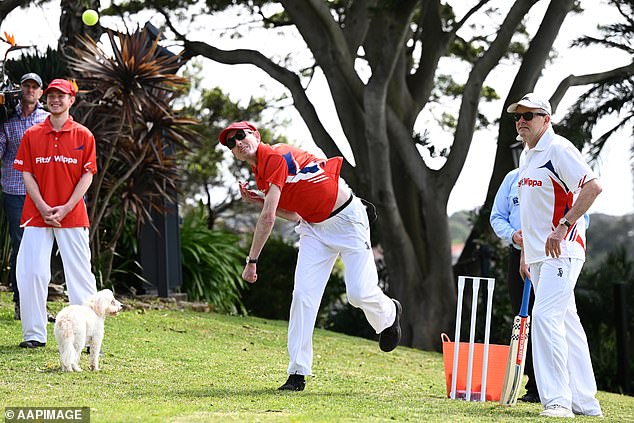 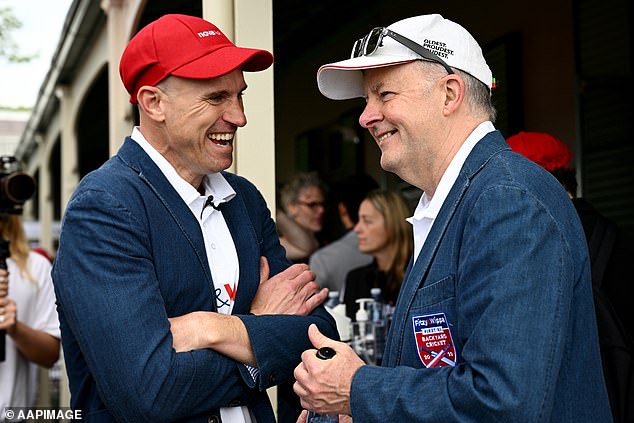 Aussie cricketers Stella Campbell, Nathan Lyon and Brett Lee did their best to improve the level of play.

It wasn’t just a hit and a giggle either. $15,000 was raised for Ronald McDonald House Charities in Sydney.