Fiery moment Anthony Albanese blows up at ABC presenter Leigh Sales after she accuses him of back-flipping on wage increase promise: ‘That’s not right’

Anthony Albanese has snapped at Leigh Sales after she accused him of back-flipping on a wage increase promise, insisting ‘that’s not right’.

The Opposition Leader appeared on 7:30 in his final interview of the gruelling six-week election campaign where he faced off with the ABC presenter and was grilled over his recent run of gaffes.

‘During the campaign, you made the unemployment figure mistake. You said this week that Australia’s borders were closed when they’re not. You supported a 5.1 per cent wage increase and then wound it back to say that it would only be for minimum wage earners,’ Sales said.

‘You did,’ Sales responded, but the Opposition Leader continued to speak over her saying: ‘We were asked a question about ‘if the Fair Work Commission came out with a 5.1 per cent increase would you welcome it?’ and I said ‘absolutely’.’

Mr Albanese rejected the idea that he had to specify it days later, as he had never made the promise. He again shut down Ms Sales line of questioning with ‘That’s not right, Leigh.’

Mr Albanese (pictured) blew up at 7:30 host Leigh Sales after she claimed he made an empty promise to voters

‘In this campaign with respect some of the nonsense that’s gone on from some of the journalists thinking the campaign was about them and gotcha moments is one of the things that puts people off politics.

‘The whole debate that day was about the case that is before the Fair Work Commission on the minimum wage increase,’ Mr Albanese said, clarifying the 5.1 per cent increase was never slated to apply to all wages but only those on minimum wage, most at risk in the climate of runaway inflation.

Ms Sales then turned Mr Albanese’s earliest blunder, saying she took his point about journalist’s questioning during the campaign before asking what really happened in his infamous unemployment figure gaffe. 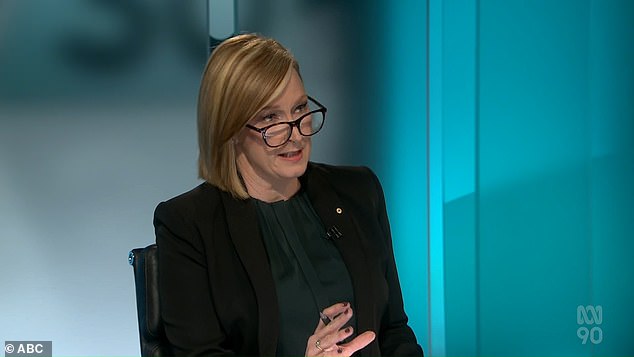 ‘That’s not right, Leigh’: The opposition leader said the 7:30 host (pictured) didn’t have all the context behind the announcement he made saying his party would welcome a minimum wage increase recommendation from the Fair Work Commission

‘People make mistakes, right, I’m not criticising you about that, but it really did set your campaign off to a shaky start, what actually happened there, dd you not know it? Was it a brain snap?’ She asked the prime ministerial hopeful.

‘Leigh, I fessed up to just having a memory lapse at that particular time in that context,’ Mr Albanese responded.

‘I’m not about making excuses. I owned it. And moved on. But some of the other things, including ones that you’ve raised. I actually gave a straight answer to a straight question about 5.1 per cent and minimum wage,’ he said.