In a press conference in Sydney on Saturday, the former basketballer – who is in Australia for a series of casino speaking gigs on the back of his well-paid role as the brand ambassador for sports betting company PointsBet – was wheeled out to show support for the Indigenous Voice to Parliament.

However, instead of endorse the Voice, he mumbled a few words about God and loving Australia.

The move – designed to generate support for the Voice among young Australians – has been criticised by Aboriginal politicians as ‘divisive’ and strange.

Radio 2GB Sydney’s Ben Fordham added his criticism on Monday morning, saying: ‘It was cringeworthy. It was corny.

‘And everyone was wondering, what on earth does Shaquille O’Neal have to do with a voice to Parliament in Australia?

‘This is a serious issue. It is also a sensitive issue. And Australians want to consider the proposal properly. But the Prime Minister has failed to present it properly.’

He added: ‘At first he refused to offer any detail about how the voice to Parliament would work and now he brings out the Shaq attack.

‘How patronizing wheeling out an American celebrity to try to win over an Aussie audience.’

Mr Albanese wants to set up a group of Aboriginal and Torres Strait Islander people, known as the Voice, who would have a so-far undefined level of power to influence and alter proposed legislation that affected indigenous people.

He wants to enshrine the body in the Constitution, which would require the passing of a referendum. 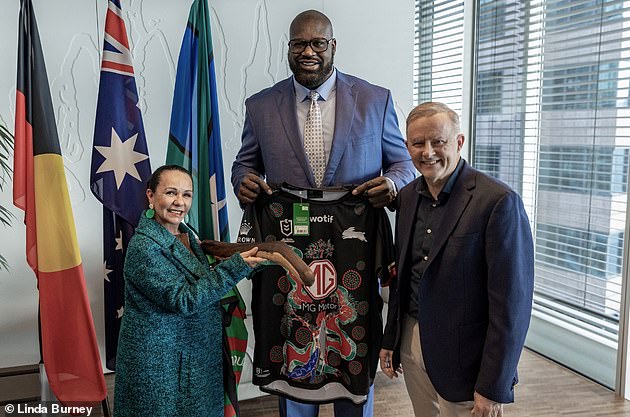 Former deputy prime minister Barnaby Joyce also slammed the meeting and questioned how it could inspire anything but ‘cynicism’ in Australians.

‘Are you selling McDonald’s or changing the Constitution,’ he told Sunrise on Monday.

‘Why have you got an American basketball star standing at the podium about 10 feet taller than Anthony Albanese – what’s this about?

‘Why are we having a multi-millionaire American basketball star over here to talk about how we run our Constitution… how could (Labor) possibly think that would do anything but inspire cynicism?’

‘It’s not surprising that the world is looking at Australia at this important moment in our history and saying it would be great if First Nations Australians were able to speak up about the policies that affect their lives with a constitutionally enshrined voice,’ she said.

‘Shaquille O`Neal brings a lot of style, power and attention to an important issue.’

Among those who criticised the meeting with O’Neal were Greens senator Lidia Thorpe and Coalition senator Jacinta Price, who are both Aboriginal.

Senator Thorpe attacked O’Neal for injecting himself into the issue during an increasingly heated debate.

‘Thought a black man coming to our country would be more respectful to First Nations people than interfering in what is a controversial topic, dividing our people,’ she wrote on Twitter.

‘Ill advised, hope you take the time to set it right. We don’t come to your country and interfere in your business.’ 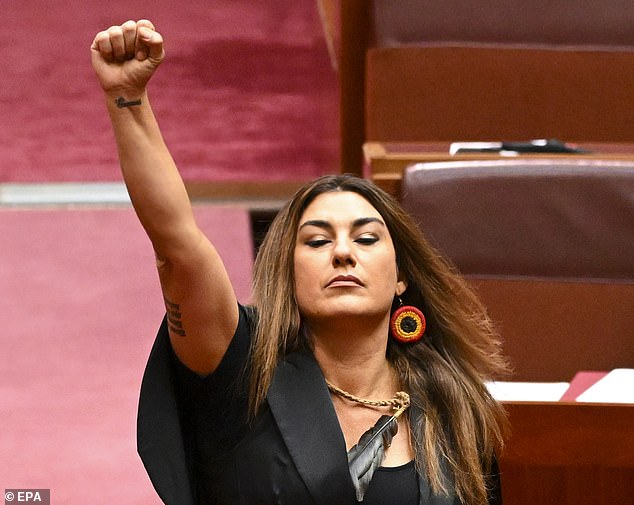 Australia Greens Senator for Victoria, Lidia Thorpe raises her arm during her swearing-in ceremony in the Senate chamber at Parliament House in Canberra, Australia,  August 1, 2022

Senator Thorpe is strongly supportive of the Voice to Parliament, but appeared to think the basketball legend did more harm than good.

The newly elected Country Liberal senator, who opposes the Voice, was scathing about the prime minister, Indigenous Australians Minister Linda Burney, and the man widely known as Shaq.

‘If the PM and the Minister for Indigenous Australians thinks Shaq’s experience with ‘lifting people up who are marginalised’ is the answer to winning Yes votes for the Voice then it demonstrates how clueless and out of touch they both are,’ she said.

‘I’ve no doubt Shaq’s a top bloke but it’s a bit insulting to call on a black American to help with black Australians as if this is all about the colour of one’s skin.’

She said Mr Albanese and Ms Burney, who is indigenous, should feel ashamed for ‘such shallowness with no substance when we’re faced with such serious issues’.

Ms Burney kept things much more lighthearted in posting a picture of herself with O’Neal and Mr Albanese to social media.

‘Not every day you get to shake hands with NBA legend Shaq,’ she said. 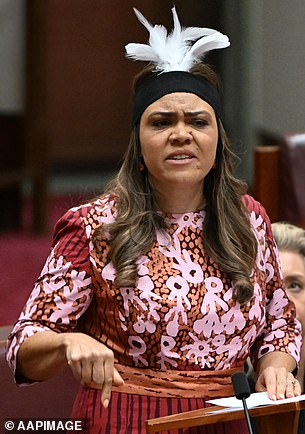 ‘The 4 time NBA champion discussed his charity work, basketball and his interest in the First Nations Voice.

Mr Albanese said O’Neal requested a meeting in Sydney to learn more about the referendum on the proposed Voice to Parliament.

The 2.11m giant dwarfed both Mr Albanese and the petite Ms Burney at the short photo opportunity.

Shaq proved to be a man of few words on this occasion, though he did perform an odd move in gently pulling Ms Burney’s hand to touch his forehead.

Mr Albanese later said the meeting had been a success, saying: ‘It was a very positive conversation,

‘He is interested in this country, his second visit to Australia.

‘He knows that we are a warm and generous people, and he wanted to inform himself about what this (Voice) debate was about… by engaging directly with the Minister for Indigenous Affairs and myself as the Prime Minister.

‘It is a really positive discussion about the way that Australia is seen in the world.’

Though many commenters on Ms Burney’s Facebook page supported him, some were perplexed by why they were using O’Neal to publicise Australian politics. 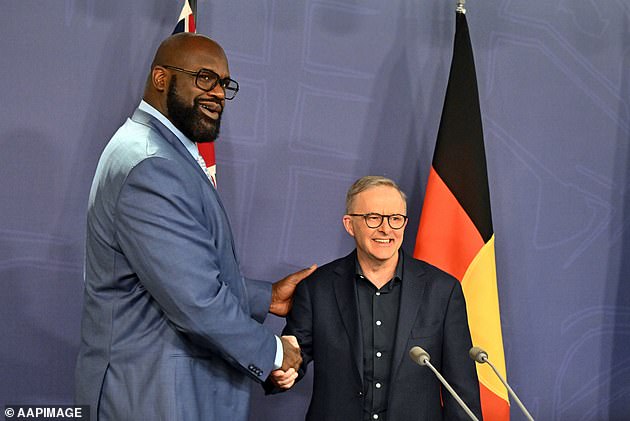