Albo’s #MESHOO moment: Anthony Albanese is accused of being ‘RUDE and dismissive to a woman’ with ‘shoo’ gesture – and PM then blames HER for ‘total hypocrisy’

Anthony Albanese has denied disrespecting Liberal frontbencher Sussan Ley after he was caught on camera ‘shooing’ her away in Parliament.

The Prime Minister made the gesture towards the deputy Liberal leader while she was speaking during Question Time on Thursday, sparking uproar from the Opposition benches.

A furious Ms Ley accused Mr Albanese of hypocrisy after he had promised during the election campaign to change politics to make it more inclusive for women.

Was the gesture disrespectful?

‘I don’t mind the rough and tumble of politics, but I do mind the hypocrisy that he displayed in Question Time,’ she said in a statement.

‘If Anthony Albanese wants to be rude to a woman and dismissively wave her away when she’s trying to speak in parliament, that’s a choice for him, but it’s completely out of step with the values of a modern workplace in this country.’

In an ABC radio interview on Friday morning, Mr Albanese denied being disrespectful, insisting: ‘I have been respectful and I’ll continue to be.’

He accused the Coalition of hypocrisy, claiming Opposition members had been constantly disrupting him throughout Question Time.

‘The opposition have chosen the road of disruption that is what they’re engaged in consistently,’ he said.

‘I dismiss the comments as being totally hypocritical, given the yelling that occurred every time I was on my feet, including non-stop gestures, yelling for me to sit down.’ 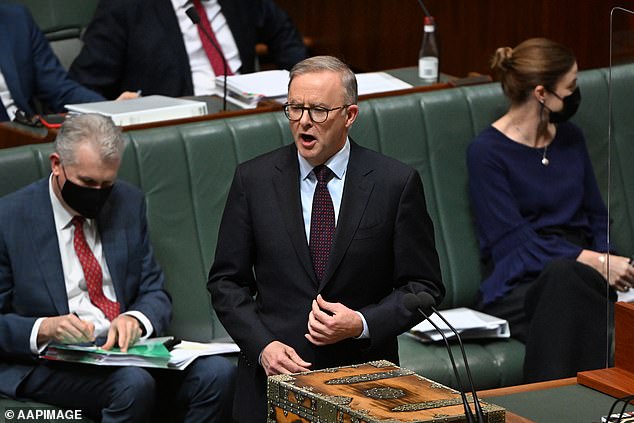 Mr Albanese (pictured) accused the Coalition of hypocrisy, claiming Opposition members had been constantly disrupting him throughout Question Time

Immediately after the shooing gesture, Manager of Opposition Business Paul Fletcher asked Mr Albanese to apologise, telling Parliament: ‘It was disrespectful to a senior female parliamentarian and I ask him to withdraw that.’

But Mr Albanese said Mr Fletcher was simply playing politics after a bad week for the Coalition.

‘Paul Fletcher was on, I think, naught out of about 50 this week in terms of his points of order, trying to score cheap points rather than engage constructively in debate,’ he said.

Education Minister Jason Clare also defended the PM on Sunrise on Friday morning, saying: ‘I’ve seen politicians from both sides do gestures like that when someone’s point of order is rejected.’

He said the Opposition cannot give lectures about the treatment of women and said Ms Ley ‘stands out like a cocktail bar in the Sahara’ in the ‘Dads Army’ Liberal Party.

Ms Ley said the ‘shooing motion’ amounted to Mr Albanese telling her ‘sit down and shut up’.

Mr Albanese pledged during the election campaign to make politics more inclusive and doubled down in his first speech to Labor members on May 31.

‘We have an opportunity to shape the future from this position,’ he said.

‘We need to change the way that politics operates in this country. We need to be more inclusive.

Also on Friday morning, Mr Albanese revealed he is going on holiday in Australia next week, leaving Richard Marles as Acting Prime Minister.

The PM said he wanted to be upfront about his break after Scott Morrison was blasted for sneaking away to Hawaii during the 2019 bushfires. 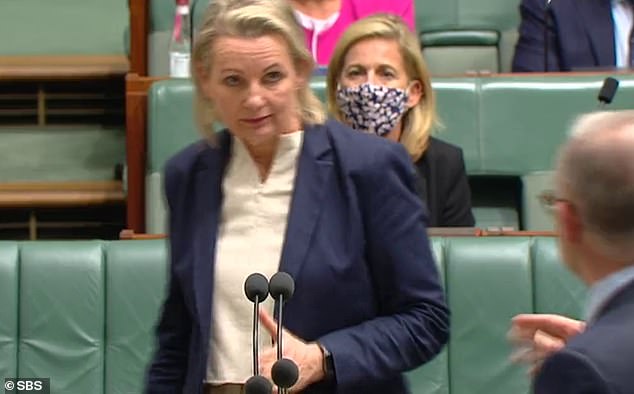