Prime Minister Anthony Albanese has refused to say whether he would ram an Indigenous Voice to Parliament through parliament even if it failed at the polls.

Sky News host Chris Kenny told Mr Albanese that Australians required more detail on the proposal before they voted in a referendum later this year.

Mr Kenny asked the Prime Minister, twice, if he would legislate regardless.

Mr Albanese shied away from giving a decisive answer, instead saying he had faith in the public.

‘I will follow what Indigenous people said,’ Mr Albanese replied.

‘This is a process that began in 2012, there was five years of consultation leading up to 2017. Aboriginal and Torres Strait Islander people meeting at Uluru and coming up with the statement that they wanted-‘

‘Yes, sorry to interrupt, but we understand the process,’ Mr Kenny cut in.

‘If it failed, would you legislate a Voice anyway?’

‘I’m not contemplating failure here. What I’m doing is being as optimistic as the Australian people are themselves,’ Mr Albanese retorted.

‘This is an opportunity to unite the nation, Chris. And I want Australians to take up that opportunity. It is a generous, gracious offer for non-Indigenous Australians to join with Aboriginal and Torres Strait Islander peoples.’

The prime minister pointed out the former Liberal government could have legislated a Voice to Parliament ‘any time’, with Mr Kenny agreeing they had been ‘slack’.

He defended the proposal as ‘conservative’ and said enough detail had been provided to the Australian people ahead of the referendum.

‘There is a lot of detail out there,’ he said.

‘We know what a voice is but we also know what it isn’t.’

Mr Albanese said more information would be provided when the legislation is put before Parliament, in order to ‘enact’ the referendum. 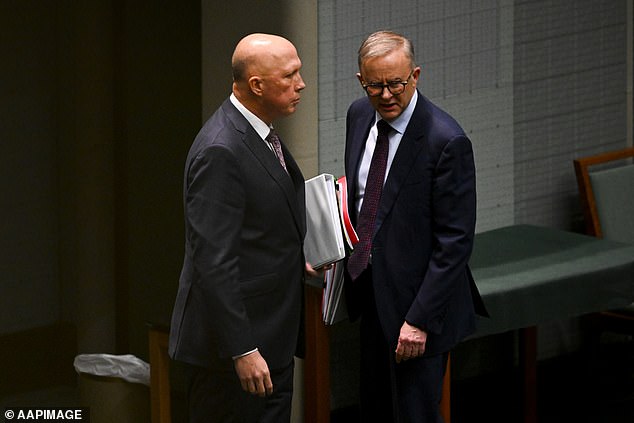 ‘In order to do that, the words and the constitutional changes will be a part of that legislation,’ he continued.

‘But a part of that debate will be what a Voice looks like … It will be considered as part of that process for all to see.’

A parliamentary debate into the finer details of the proposed Voice to Parliament is expected to kick off in March.

It comes amid amounting criticism over a lack of detail, with Opposition leader Peter Dutton accusing the leader of treating Australian people like ‘mugs’.

Last week, Mr Dutton demanded Labor flesh out its plan by answering 15 questions about the make-up of the proposed Voice and its function.

He said his letter was issued on behalf of millions of Aussies ‘who just want the detail’ and claimed his rival ‘making a catastrophic mistake’ by not providing ‘accessible, clear and complete’ information on the proposed Voice. 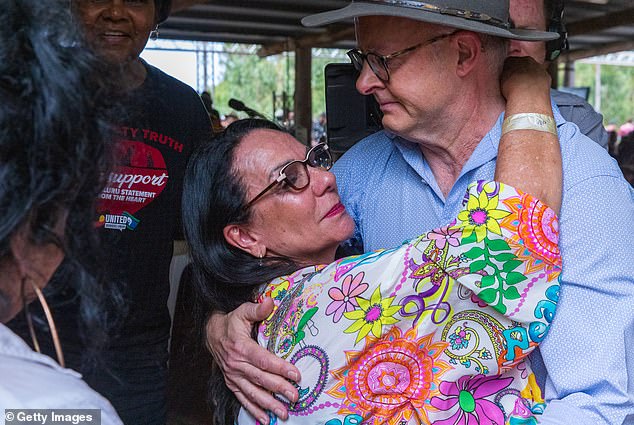 At the recent GQ Man of the Year Awards in Sydney, Mr Albanese delivered a rousing speech, calling for the nation to enact the Voice to Parliament.

‘Make sure that you do something that will make you proud and that will make a difference to this country. It’s a huge risk and it’s a risk that First Nations elders are willing to take, because they’re sick of waiting for recognition.

‘And a Voice to Parliament is simply that: It’s so they’re consulted on matters that affect them, but also means that our nation’s birth certificate is truly as it should be.’

Dutton’s 15 questions about the Indigenous Voice to Parliament

1. Who will be eligible to serve on the body

2. What are the prerequisites for nomination?

3. Will the Government clarify the definition of Aboriginality to determine who can serve on the body?

4.How will members be elected, chosen or appointed?

5. How many people will make up the body

6. How much will it cost taxpayers annually?

7. What are its functions and powers?

8. Is it purely advisory or will it have decision-making capabilities?

9. Who will oversee the body and ensure it is accountable?

10.If needed, can the body be dissolved and reconstituted in extraordinary circumstances?

11. How will the Government ensure that the body includes those who still need to get a platform in Australian public life?

12. How will it interact with the Closing of the Gap process?

13. Will the Government rule out using the Voice to negotiate any national treaty?

14. Will the Government commit to Local and Regional Voices, as recommended in the report on the co-design process led by Tom Calma and Marcia Langton?

15.If not, how will it effectively address the real issues that impact people’s lives daily on the ground in the community?