By Associated Press and Chris Pleasance for MailOnline

Another new variant of coronavirus has emerged in Nigeria, Africa’s leading public health official has said.

John Nkengasong, head of the Africa Centres for Disease Control and Prevention, revealed the existence of the new strain on Thursday – saying it is different to the ones found recently in the UK and South Africa.

But he added that it is still too early to tell what effects the new variant might possess, saying that scientists needed ‘more time’ to study it.

Coroanvirus variants emerge routinely as the virus spreads, but those in the UK and South Africa have been widely reported because scientists believe they are significantly more infectious than previous strains.

A new variant of coronavirus has emerged in Nigeria, Africa’s most-populous country, that is different to the variants found in the UK and South Africa, medics have said

The alert about the apparent new variant was based on two or three genetic sequences, he said, but that and South Africa’s alert late last week were enough to prompt an emergency meeting of the Africa CDC this week.

Dr Nkengasong said the Nigeria CDC and the African Centre of Excellence for Genomics of Infectious Diseases will analyse more samples.

The news comes as infections surge again in parts of the African continent.

The new variant in South Africa is the predominant one there, Mr Nkengasong said, as confirmed infections in the country approach a million.

While the variant transmits quickly and viral loads are higher, it is not yet clear whether it leads to a more severe disease, he added.

‘We believe this mutation will not have an effect’ on the deployment of Covid-19 vaccines to the continent, he said of the South Africa variant. 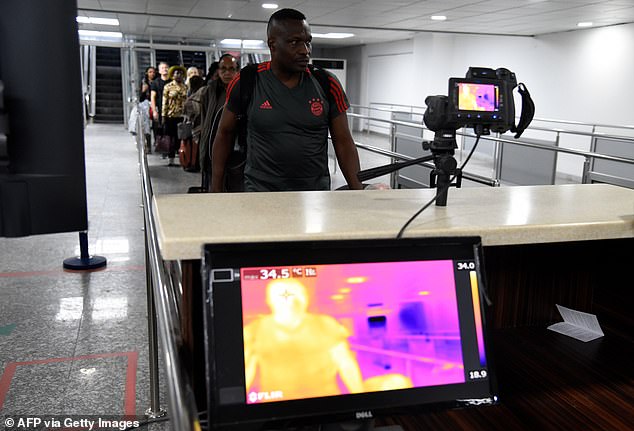 Three samples of the new variant have so far been sequenced, medics said, but added that it is too early to tell what characteristics it might possess (file image, travellers at Lagos airport)

South Africa’s health minister late on Wednesday announced an ‘alarming rate of spread’, with more than 14,000 new cases confirmed in the past day, including more than 400 deaths.

The country has more than 950,000 infections and Covid-19 is ‘unrelenting,’ Zwelini Mkhize said in a statement.

The African continent has more than 2.5 million confirmed cases, or 3.3% of global cases. Infections across the continent have risen 10.9% over the past four weeks, Mr Nkengasong said, including a 52% increase in Nigeria and 40% in South Africa.