Another 12 monkeypox infections were spotted across America on Wednesday, officials revealed, bringing the national tally to 85.

The new cases marked the biggest day-on-day rise since the outbreak began a month ago, and the first time daily cases have breached double digits.

Nevada became the eighteenth state to detect the rash-causing virus, with a man in his 20s who had recently traveled to another part of the United States testing positive for the virus.

Scientists are already warning that the tropical disease may be spreading undetected in some areas, and that patients are not suffering typical symptoms.

In an update the Centers for Disease Control and Prevention (CDC) said some patients were facing pain or bleeding around the anus, not previously associated with the illness.

It comes after Chicago yesterday became the first city to warn people who ‘feel ill’ or have rashes to avoid summer festivals to limit the risk of spreading the virus.

More than 2,000 cases have been reported across 40 countries — mostly in Europe — outside the native West Africa in the current outbreak. 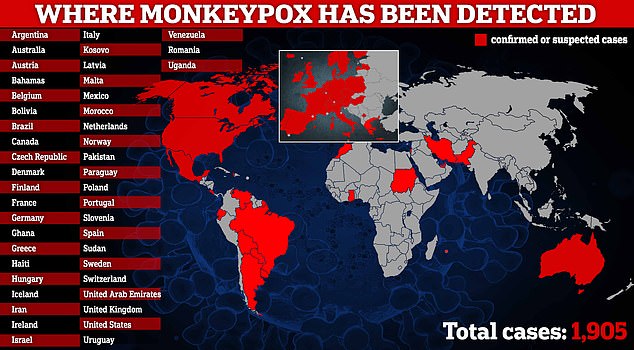 In today’s dashboard update, Florida reported the biggest rise in infections after detecting another four — taking its tally to nine.

Two were spotted in Chicago and Massachusetts respectively.

One case each was also detected in California, Nevada, New York City and Washington D.C.

WHO investigating if monkeypox can spread through semen

The World Health Organization (WHO) has said it will investigate whether monkeypox can be passed on through semen.

Currently, scientists say it may spread through sex due to physical contact with infectious skin lesions on the genital area or other parts of the body.

But this week Italian scientists said they had detected fragments of the virus in semen — raising the possibility it could transmit through this route.

German scientists say they have also detected the virus in semen.

A WHO official revealed they were looking into the reports Wednesday.

The agency’s monkeypox incident manager Catherine Smallwood said: ‘We really need to focus on the most frequent mode of transmission and we clearly see that to be associated with skin-to-skin contact.’

More than 2,000 cases have been detected globally outside of West Africa, where it is endemic.

These are mostly among gay and bisexual men.

But scientists warn the rash-causing virus spreads through close personal contact, and it is likely the disease could spill over into other groups.

New York City currently has the biggest outbreak in the country with 16 cases, according to local officials. Sullivan County, in upstate New York, has reported a presumptive case as well.

California is tied for the most infections, also at 16.

Concerns were raised this week that monkeypox was spreading undetected in Massachusetts after two cases were spotted with no links to international travel or its first infection from last month.

Today another two cases were spotted in men, although health chiefs did not say whether they were close contacts of another case or had recently traveled.

He added: ‘I noticed that [health officials in the state] have urged “vigilance”. I think it is extremely appropriate.’

Florida and Chicago are yet to release any additional details about their new cases of monkeypox.

But earlier this week Chicago’s health officials said people who ‘feel sick’ or ‘have rashes’ should not attend summer parties or festivals in case they have monkeypox.

It said the guidance was issued to allow residents to make ‘informed choices’ about where they are mixing with others.

Medical literature suggests monkeypox patients experience a fever within the first 21 days of being infected, followed by a rash that covers the face before spreading to the rest of the body.

But in an update on Tuesday the CDC said many patients it was recording were not experiencing the typical symptoms.

It said many were developing the rashes before fevers, with some never experiencing a fever at all.

Skin lesions could also appear all over the body and progress at different times, whereas medical literature suggests rashes would gradually transition to fluid-filled and then puss-filled blisters at the same time.

Rashes were also being recorded in the mouth and genital area or anus, which has not previously been associated with the illness.

Most cases are among gay and bisexual men and linked to international travel, health chiefs have said.

But at least two have now been detected in people with no links to international travel or another known case, suggesting the virus is spreading under the radar in the United States. 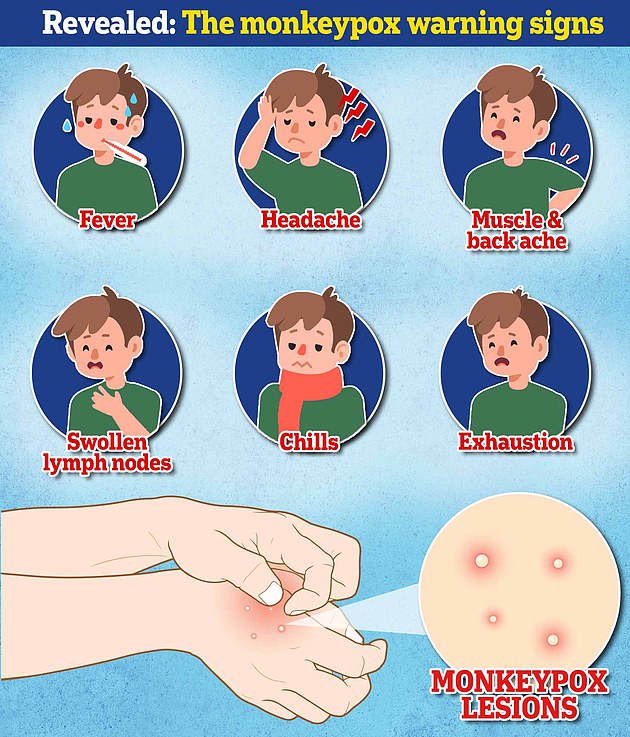 But CDC chiefs have so far brushed off these cases, saying they are likely contacts of people who returned from international travel but were not diagnosed.

It says they are yet to record any urban outbreaks of the tropical disease similar to those being registered in Europe.

It comes as the World Health Organization says it will rename monkeypox with a new ‘non-discriminatory and non-stigmatising’ term ‘as soon as possible’.

As well as renaming the actual pathogen itself, strains will likely also be lettered such as A or B to remove any mention of the parts of Africa where they were first spotted.

Over 30 researchers last week signed a position paper stating there was an ‘urgent need’ to change its name given the current outbreak, which has mainly struck gay and bisexual men.

They wrote: ‘Continued reference to, and nomenclature of this virus being African is not only inaccurate but is also discriminatory and stigmatizing.’

Dr Tedros Adhanom Ghebreyesus, head of the WHO, has confirmed the virus will be renamed.

He said: ‘[The] WHO is working with partners and experts from around the world on changing the name of monkeypox virus, its clades, and the disease it causes.

‘We will make announcements about the new names as soon as possible.’