A father of six has been remembered as ‘annoying’ to his siblings and ‘loveable’ to his three wives in a humorous obituary.

The tribute to Stephen Ralph Morris, who was 75, was published in the Courier Mail’s death notices in Brisbane and posted on social media on Wednesday.

The death notice had a photo of Mr Morris, who died last Saturday, drinking a beer. He was described as a ‘mongrel’ who was a ‘larger than life’ character.

The article had a photo of him drinking beer as it described him as a ‘larger than life, life of the party’ character (pictured)

‘Trying, but loving son to Norm and Gwen. Annoying, yet protective big brother to Phillip and Helen. Bewildering, yet loveable husband to Valda, Joann, Rosemary.

The obituary when on to say he had been a ‘partner in crime to Daryl – AKA Dismal Dizzy’ and was known as a ‘mongrel to many of his mates’.

‘Storyteller, poet, larger than life, life of the party! Thanks for the memories you crazy b*****d,’ it said.

There would be no funeral at ‘Steve’s request’ but instead a ‘p***up’ at Stafford Tavern in Brisbane’s north on September 17 at 2pm.

‘I did it my way,’ the tribute ended.

The obituary was described as ‘brilliantly written’ on Reddit, and quickly attracted plenty of responses, many of whom agreed with having a party over a funeral. 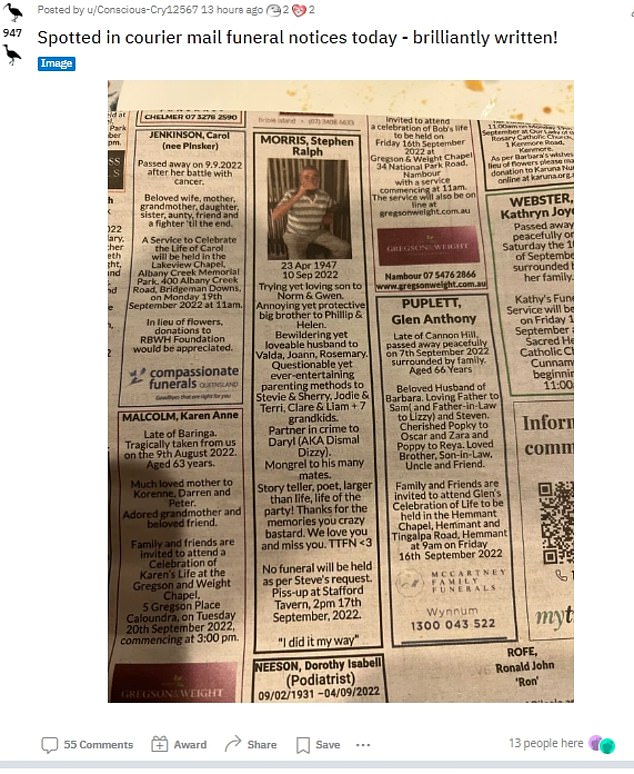 The social media post (pictured) was captioned: ‘Spotted in Courier Mail funeral notices today – brilliantly written!’ – and drew many responses from those who also want a party instead of a funeral

‘That’s what I want instead of a funeral – everyone have a party! The Janis Joplin approach,’ said one commenter.

‘I have already told my family I absolutely don’t want a funeral. I find them weird. I would allow a party but that’s it,’ said another.

Others who were not known to Mr Morris said they were keen to go to the pub party.

‘If my current plans fall through this weekend, my backup will be Stafford Tavern at 2pm wearing a fun shirt … despite never meeting the bloke,’ one said.

‘I reckon Stephen would approve of us all turning up!’ said another commenter.

Another joked about Mr Morris’s partners turning up.

‘The three wives will be there to swap notes,’ she said. 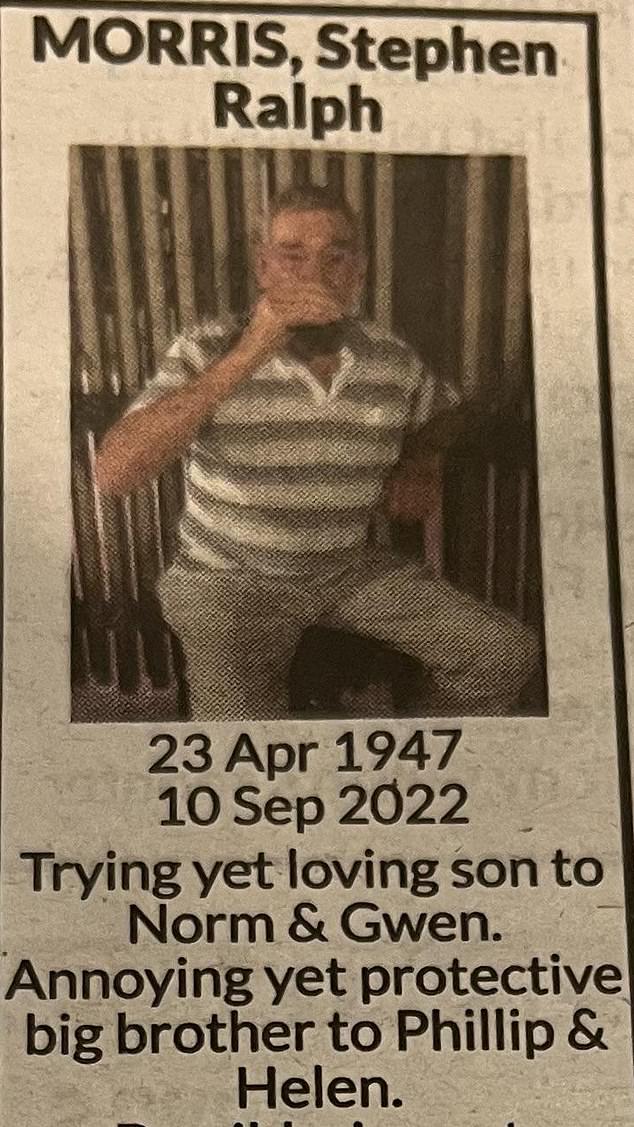 The honest obit (pictured) described Mr Morris as the ‘Trying, but loving son to Norm and Gwen’