Laffoon, 20, who was granted control of his mother’s estate in November, thanked fans for their ‘love, care and support’ as he discussed the release of her second memoir and an event celebrating Heche’s life and book.

‘Homer here,’ the message, posted Thursday, began. ‘Never imagined I’d find myself responsible for mom’s IG account, but here we are. First things first, from August to now, the amount of love, care and support shown by those on social media and IRL has been overwhelming and blessedly received – thank you.

‘Here I am sharing it with the community’: Anne Heche’s son Homer Laffoon has shared details about his late mother’s upcoming memoir Call Me Anne; pictured 2021

‘One day at a time is working for me as I’m sure the healing journey will be a long one. Your good thoughts and well wishes will continue to comfort me on my path.

‘But this is my mom’s account so enough about me. I have a responsibility to share with her community what she was working on and how excited she would have been to tell you herself.

‘My mom had a completed manuscript for a second book at the time of her passing. The book is the product of mom’s further efforts to share her story and to help others where she could.

‘Call Me Anne is the result and I know she was excited to share with the world. So, mom, here I am sharing it with the community you created, may it flourish and take on a life of it’s own, as you would have wanted.’ 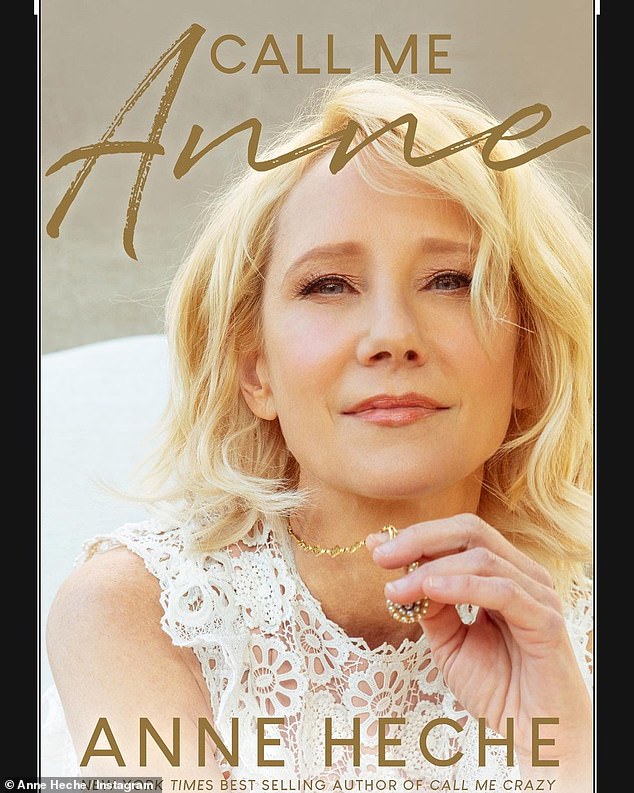 Laffoon then invited fans to attend an upcoming event celebrating Heche and her memoir.

‘For those in Los Angeles, there will be a special event at the Barnes & Noble at The Grove. I know mom would want to see everyone’s smiling face as she read an excerpt and signed copies.

‘I don’t plan on using this platform too often but know she loved her fans, loved writing (she wrote endlessly) and it would not feel right not to reach out at a time like this.

‘As mom liked to sign off, Peace and love, Homer.’ 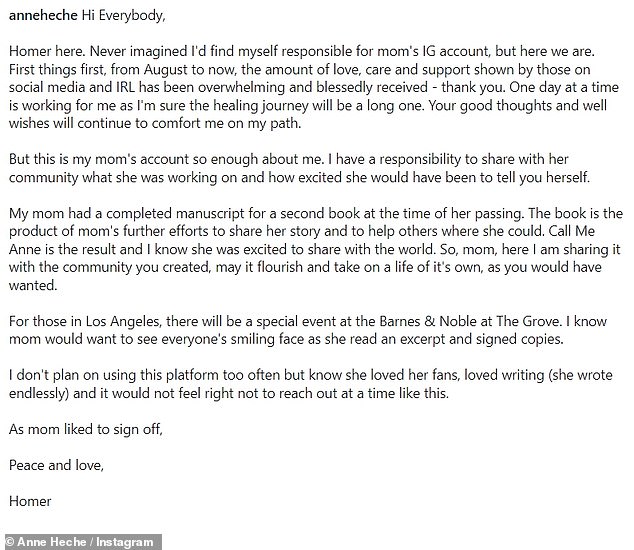 Appreciation: Laffoon, 20, who was granted control of his mother’s estate in November, thanked fans for their ‘love, care and support’ in the wake of her passing at age 53

Anne’s book, scheduled for release this month, is set to cover her career in Hollywood as well as her relationship with comedian Ellen DeGeneres and her friendships with Harrison Ford and Alec Baldwin.

The Six Days, Seven Nights actress died after suffering injuries during a fiery crash in Mar Vista, California on August 14, 2022. She was 53-years-old.

Call Me Anne is a sequel to the memoir Call Me Crazy, published in 2001.

Start, an independent publisher based in Hoboken, New Jersey, shared the excerpt in September with The Associated Press. 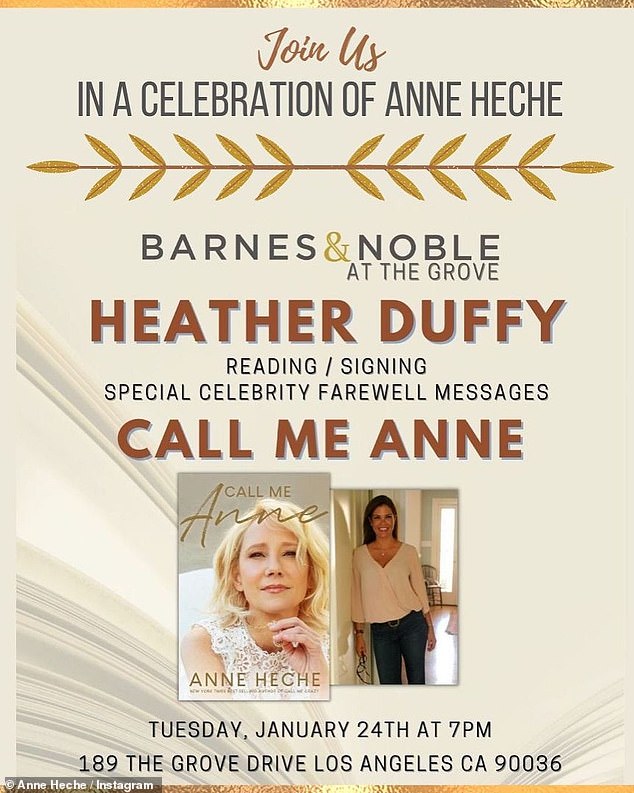 Book signing: Laffoon then invited fans to attend an upcoming event celebrating Heche and her memoir

The book’s publisher, Jarred Weisfeld, said that he signed a deal with Heche in May and that she had turned in a manuscript shortly before she died.

She will also write about having Harrison Ford as a mentor, along with stories about Alec Baldwin, Ivan Reitman and Oliver Stone, among others.

The book’s release was first announced by Publishers Weekly. Heche had mentioned writing a memoir during a podcast earlier in 2022, in which she promised that ‘some of the truths’ about her and DeGeneres would be included.

The actor shared candid thoughts on her relationship with stand-up DeGeneres in the late 1990s, when they were among Hollywood’s first openly gay couples. 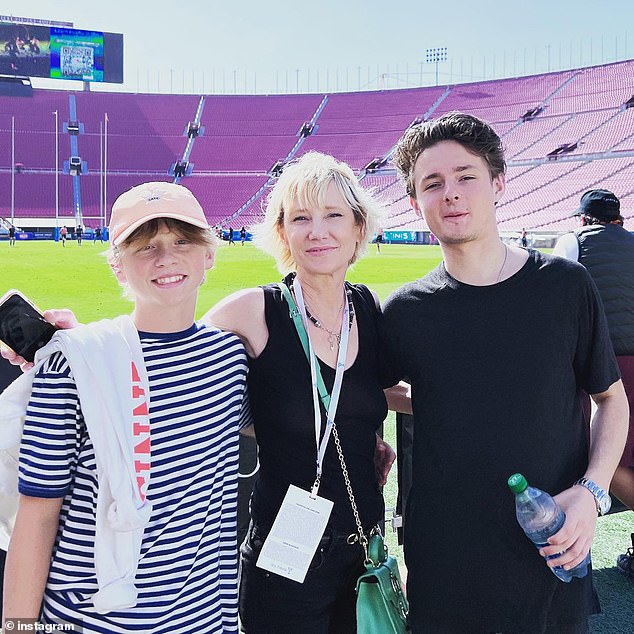 ‘I was labeled “outrageous” because I fell in love with a woman. I had never been with a woman before I dated Ellen,’ Heche wrote in Call Me Anne, which is from Start Publishing.

Heche, whose films included Donnie Brasco and Wag The Dog, was a successful film and TV star.

In her lifetime, Heche said that Hollywood effectively blacklisted her because of her being with DeGeneres, who around the same time made television history by having her character in the sitcom Ellen come out as gay. 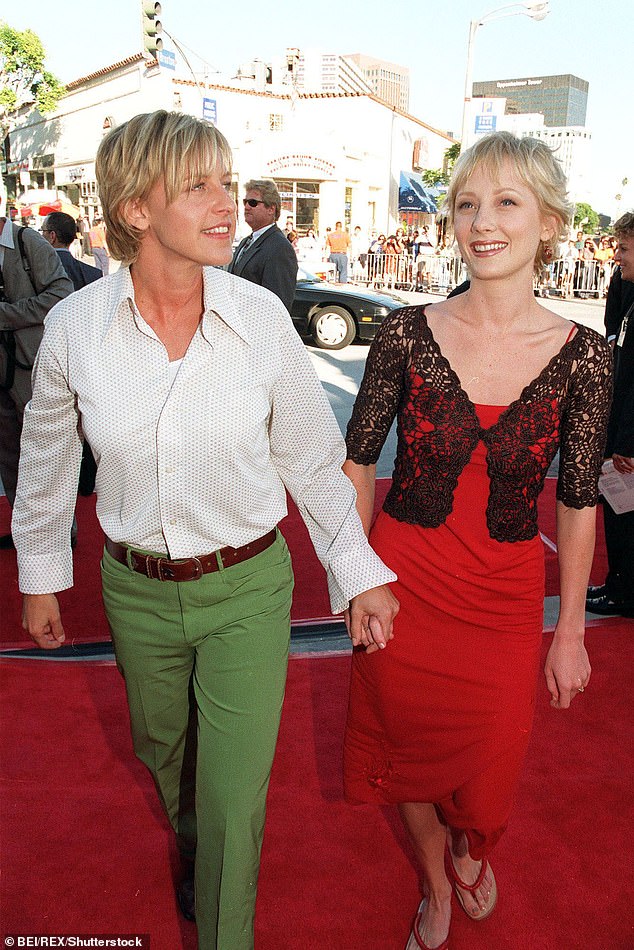 Anne’s book, scheduled for release this month, is set to cover her career in Hollywood as well as her relationship with comedian Ellen DeGeneres and her friendships with Harrison Ford and Alec Baldwin

‘I did not, personally, identify as a lesbian,’ she said.

‘I simply fell in love! It was, to be clear, as odd to me as anyone else. There were no words to describe how I felt,’ Heche wrote in her book.

‘Gay didn’t feel right, and neither did straight. Alien might be the best fit, I sometimes thought.

‘What, why, and how I fell in love with a person instead of their gender, I would have loved to have answered if anyone had asked, but as I said earlier, no one ever did. I am happy that I was able to tell you in this book – once and for all.’