ANNA MIKHAILOVA: Will Anne Widdecombe finally waltz her way into the Lords?

Is the former Tory Minister turned Strictly contestant Ann Widdecombe making another bid to step up into the Lords?

For in her latest newspaper column, she defended Boris Johnson’s much-derided decision to give a peerage to Conservative donor Peter Cruddas.

Cruddas stepped down as party co-treasurer in 2012 after being caught in a sting by undercover reporters for offering access to then PM David Cameron for a ‘premier league’ sum of £250,000.

Is the former Tory Minister turned Strictly contestant Ann Widdecombe making another bid to step up into the Lords?

Widdecombe, 73, said it was an ‘outrage’ the episode was used to discredit Cruddas because the cash-for-access allegation was a ‘falsehood’. Certainly, libel judge Sir Michael Tugendhat, father of Tom, the Tory MP, found in favour of Cruddas.

But the Appeal Court largely reversed this, saying what Cruddas had proposed to the undercover journalists was ‘unacceptable, inappropriate and wrong’. That was why the House of Lords Appointments Commission blocked Johnson’s earlier attempt to ennoble Cruddas.

But Boris decided its concerns about a man who had just happened to have donated £3 million to the Tories were ‘historic’. With the ermine about to be wrapped around Cruddas’s shoulders, the number of peers will tip over 830, and has caused some to accuse the PM of bringing the Lords into disrepute.

Widdecombe once claimed she was an ‘obvious candidate’ for a peerage and that fresh appointments to the Upper Chamber were necessary to redress its ‘balance’. But in recent comments she described the Lords as ‘too bloated’ – although I’m sure she’d make an exception if asked.

Nothing sums up Sajid Javid’s time as Chancellor better than the renovations carried out on his Downing Street flat. Unlike some politicians – £6,764 sofas for John Bercow comes to mind – parsimonious Javid chose a new shower screen and moth treatment.

Chancellor Rishi Sunak is a coke addict, I can reveal. In a Christmas call with Treasury staff, the teetotaller who’s running up £400 billion in debt, admitted: ‘Mexican coke is my favourite.’

The former head boy then elaborated how it gives him a better bump – because of its higher sugar content.

At which point, the concerned Treasury staffers started to giggle, realising that the nation’s purse strings aren’t being controlled by a drug-fuelled Wolf of Wall Street. 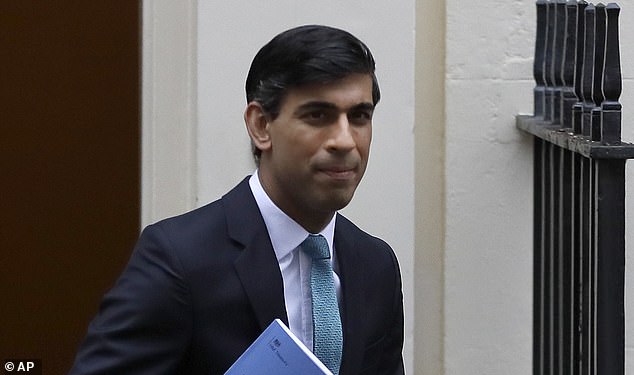 Chancellor Rishi Sunak is a coke addict, I can reveal. In a Christmas call with Treasury staff, the teetotaller who’s running up £400 billion in debt, admitted: ‘Mexican coke is my favourite’

With the Army ready to play a key role in the vaccine roll-out, who can blame Khalid Mahmood, Labour’s Shadow Minister for Defence Procurement, for showing personal initiative?

The Birmingham MP spotted a loophole that allowed him to jump the queue at his local hospital and procure a Covid jab for, er, himself.

Mahmood, who had a kidney transplant in 2014, would likely have been called for a vaccination in the spring. However, the 59-year-old announced that he’d skirted the priority list by ‘joining the queue for leftover doses’ at Birmingham’s Queen Elizabeth Hospital. ‘It’s not very well known, but at the end of the day, any vaccine unused because people have not turned up for their appointments is made available,’ Mahmood tweeted. ‘We can’t afford to waste any… doses. I joined a queue at about 3pm and got a vaccine.’

Not surprisingly, the hospital has since pleaded for the public not to queue up without appointments and pointed out that any jabs left over should go to NHS staff. Mahmood defended his queue-jumping, saying: ‘I did not tell anyone I was an MP or ask for special treatment.’

So that’s all right then.