EXPRESS INFORMER > News & Politics > Animals: Lions have their own unique roars that individuals use to recognise each other, study finds

Hear me roar! Every lion has its own unique vocal pattern that individuals use to recognise each other and can help scientists to track population movements, study finds

Every lion has its own unique roar, one that lets the ‘kings of the jungle’ recognise each other and could be used to track population movements, a study has found.

Researchers from Oxford used machine learning to analyse the roars of various lions — picking out the distinguishing frequency that can be used to tell them apart.

According to the experts, lions’ calls are usually issued in a set — with one or two soft moans followed by several loud, full-throated roars and finishing with grunts.

Previous research had suggested that lions could distinguish their peer’s roars from each other — allowing them to identify distant friends and hostile neighbours.

However, it had not previously been clear what aspects of the calls’ structure allowed them to discriminate between those made by different individuals.

Every lion has its own unique roar, one that lets the ‘kings of the jungle’ recognise each other and could be used to track population movements, a study has found (stock image)

‘African lion numbers are declining and developing cost effective tools for monitoring and ultimately better protecting, populations is a conservation priority,’ said paper author and zoologist Andrew Loveridge of the University of Oxford.

‘The ability to remotely evaluate the number of individual lions in a population from their roars could revolutionise the way in which lion populations are assessed.’

In their study, the researchers developed a wearable device they have dubbed a ‘biologger’ — which, when attached to a lion’s GPS collar, can log both audio recordings and movement data.

From this data, the team were able to cross-reference sounds and locations and associate each lion with their own characteristic roar.

Next, the team trained a pattern-recognition algorithm to ‘learn’ the characteristic features of each individual lion’s roars and then put it through its paces analysing vocal sequences that it had not ‘heard’ before.

The researchers found that the algorithm could assign a recording of a roar to a particular lion with a 91.5 per cent accuracy.

The software revealed that the key to distinguishing between each individual lion’s calls lay in looking at the changing shape of the fundamental, or lowest, frequency of one of the full-throated roars typically made in the middle of a set of vocalisations.

These shapes, the team said, have common features across all lions’ calls — but are also distinct enough between individuals that lions can likely pick up on the subtle differences to tell each other apart. 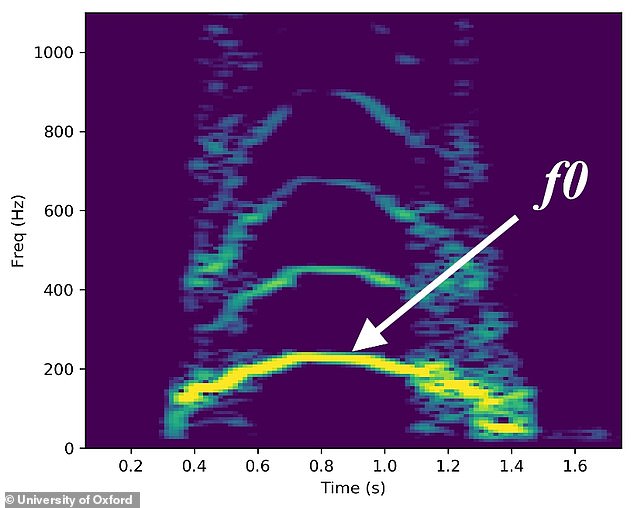 The software revealed that the key to distinguishing between each individual lion’s calls lay in looking at the shape of the fundamental frequency — or ‘ƒ0‘, highlighted on a spectrogram — of one of the full-throated roars typically made in the middle of a set of vocalisations

‘Being able to accurately distinguish between individual roars […] could facilitate the development of alternative techniques for assessing population density and tracking individual movements across the landscape,’ added paper author Andrew Markham.

With their initial study complete, the researchers are now looking to conduct play-back experiments with modified roars — with the aim of seeing if the call’s frequency alone contains enough information to allow for vocal recognition.

The full findings of the study were published in the journal Bioacoustics.