Animals being slaughtered, savagely beaten and forced into tiny cages for human entertainment and consumption feature in a distressing new photo series revealing the shocking extent of human cruelty.

The images, which reveal the barbaric realities of a dog slaughterhouse in China, foie gras production, and battery farming, are among many in a new book.

The unflinching photo series, supported by actor Joaquin Phoenix, documents animal exploitation around the world for the purposes of food, religion, entertainment, work and tradition.

A butcher at a dog slaughterhouse in China chooses the dog he will beat to death with an iron bar, in one of a series of horrific images in a new book raising awareness of animal cruelty 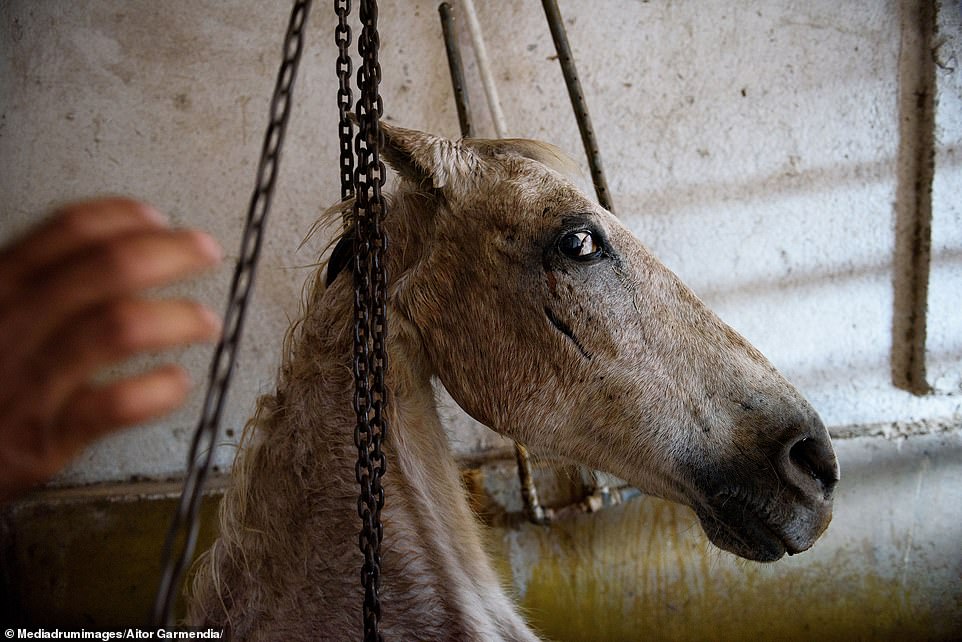 An emaciated horse is dragged with a chain around its neck before it it is suspended and strangled to death at a horse slaughterhouse in Mexico, the second largest horsemeat producer in the world 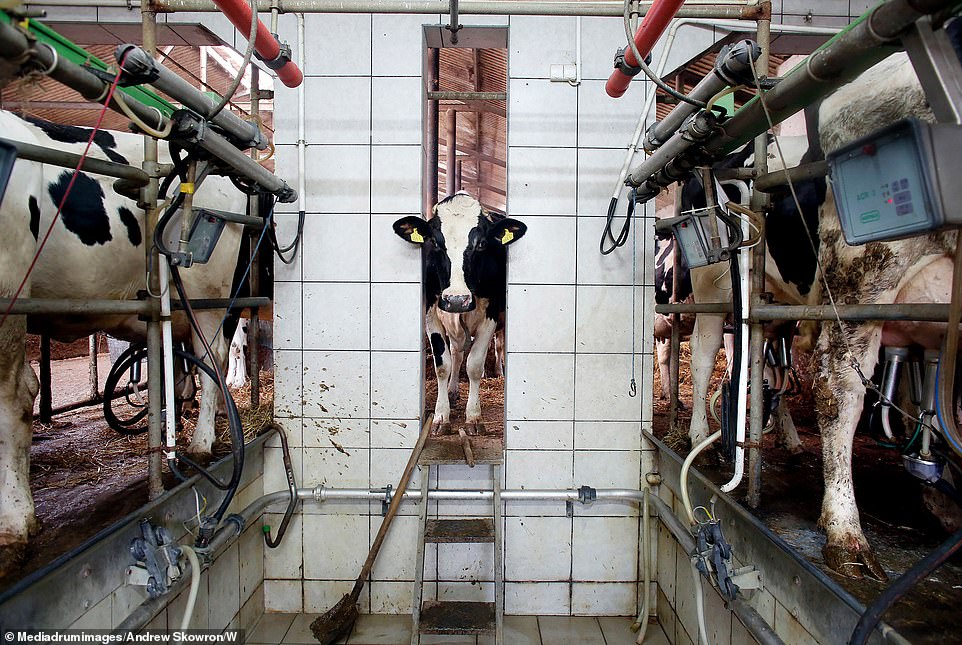 Cows in Poland are packed into a tiny dairy in Poland for milking, separated from each other by metal bars leaving the animals with minimal room and no contact with each other 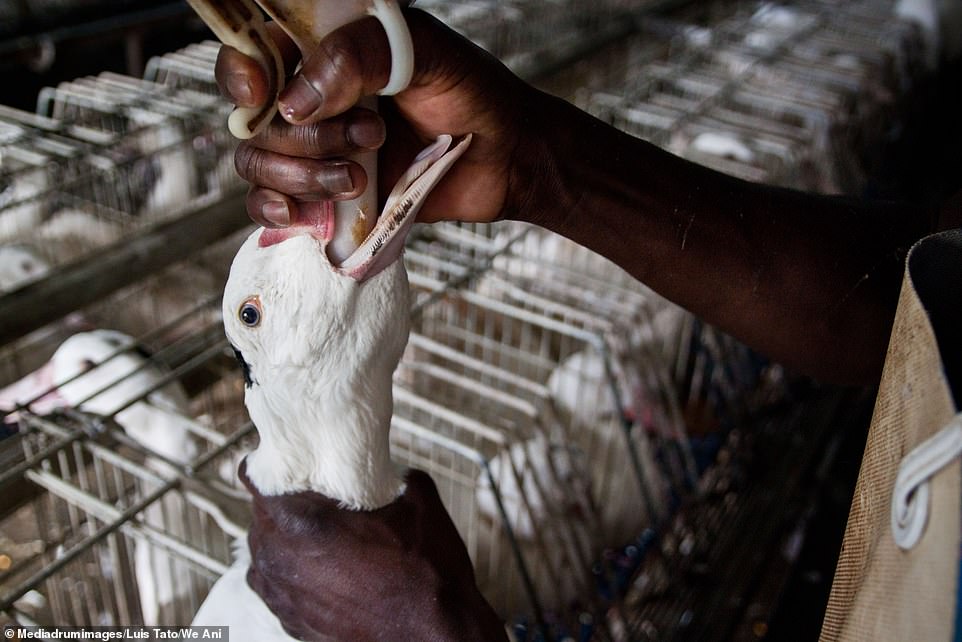 Among the unflinching images is one showing dogs locked up in cages and forced to watch as their counterparts are killed, dismembered, and cooked in front of them in Cambodia.

Another taken in a Chinese slaughterhouse depicts dogs waiting with fear as a butcher chooses the next dog to beat to death with an iron bar.

In Poland, dairy cows miserably existed between cold steel barriers and tiled walls as they were intensively milked to fill the supermarket shelves.

Another disturbing image shows cages of ducks and geese being force fed by workers to fatten their livers for the luxury delicacy foie gras. 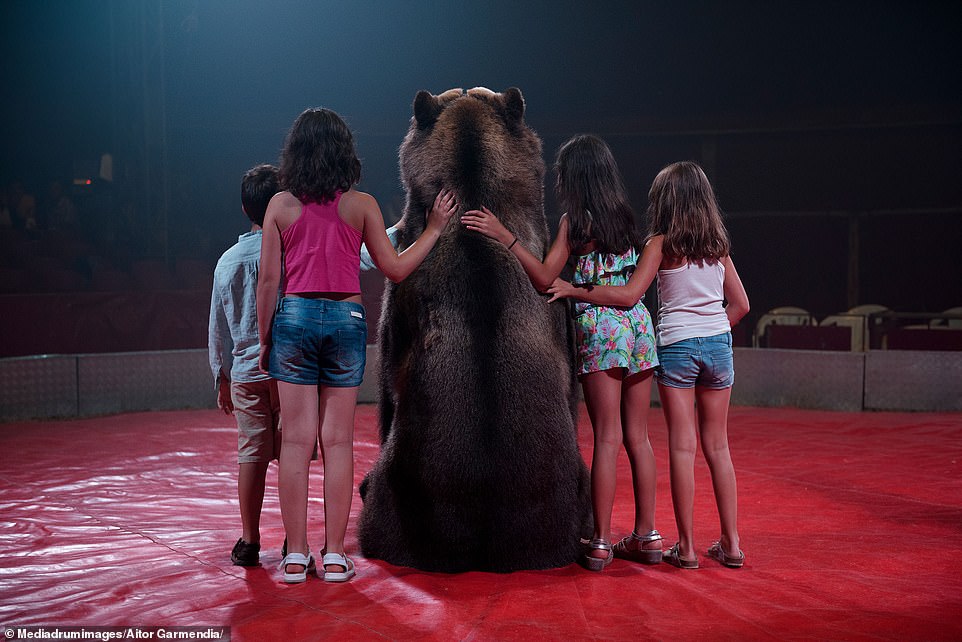 Tima the brown bear of the Gran Circo Holiday circus poses for a photo with children in Spain. The photo series exposes the cruelty of the human treatment towards animals around the world 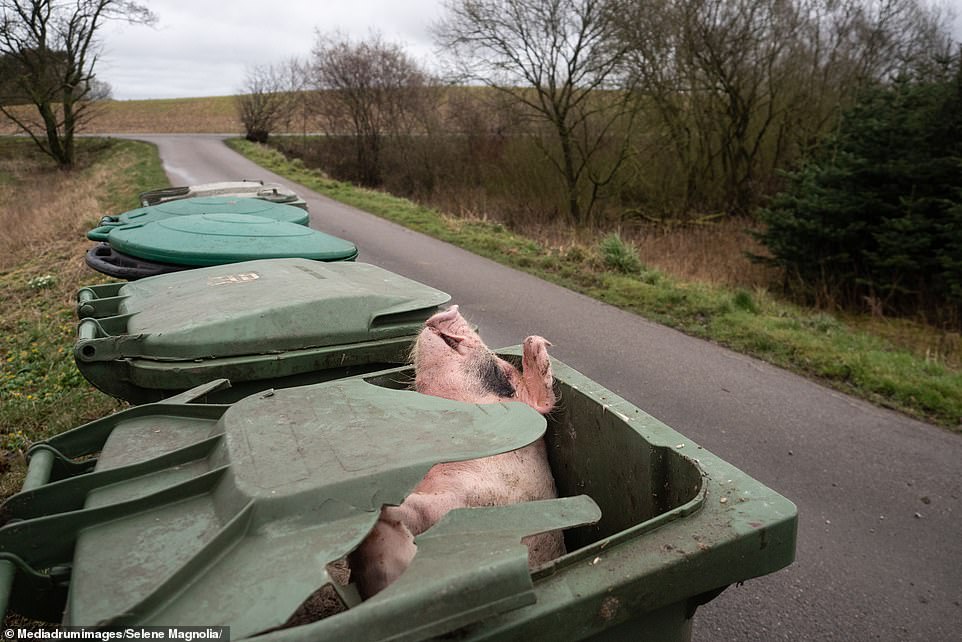 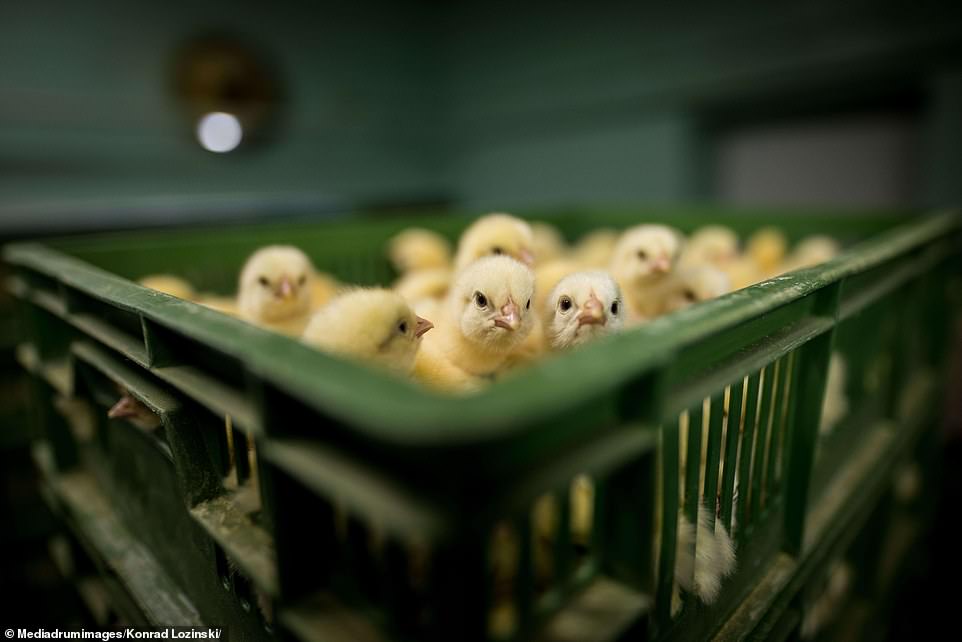 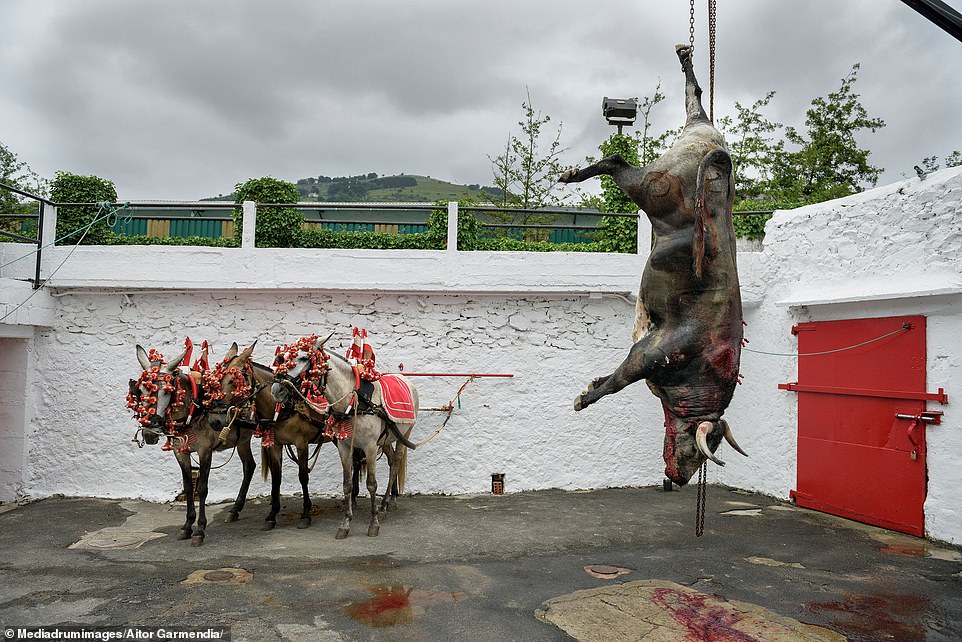 In the horse yard of a bullring in Azpeitia, Spain, a bull is hung by his hind leg to bleed out before being butchered 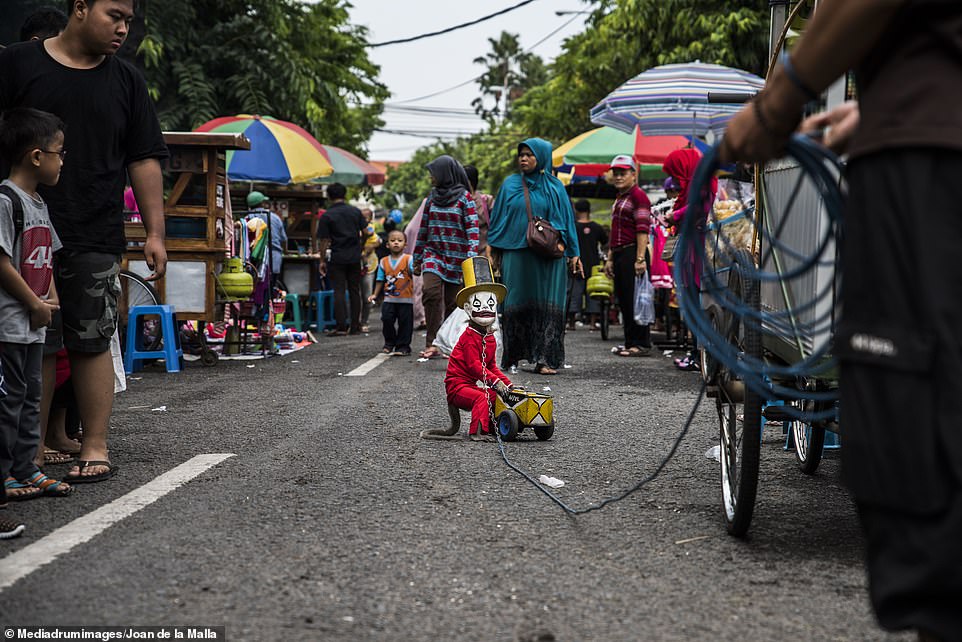 A macaque performs in a popular street show in Jakarta, Indonesia, in what is known locally as Topeng Monyet. The book exposes how animals are exploited for human entertainment

Other upsetting shots in the series include a bull hanging by its hind legs at a Spanish bullring to bleed out before being butchered and pigs being clubbed to death in Thailand.

The brutal images taken by a team of award-winning photojournalists are featured in the book, HIDDEN: Animals in the Anthropocene.

The book is published by We Animals Media and hopes to raise awareness of the widespread suffering of animals caused by humans. 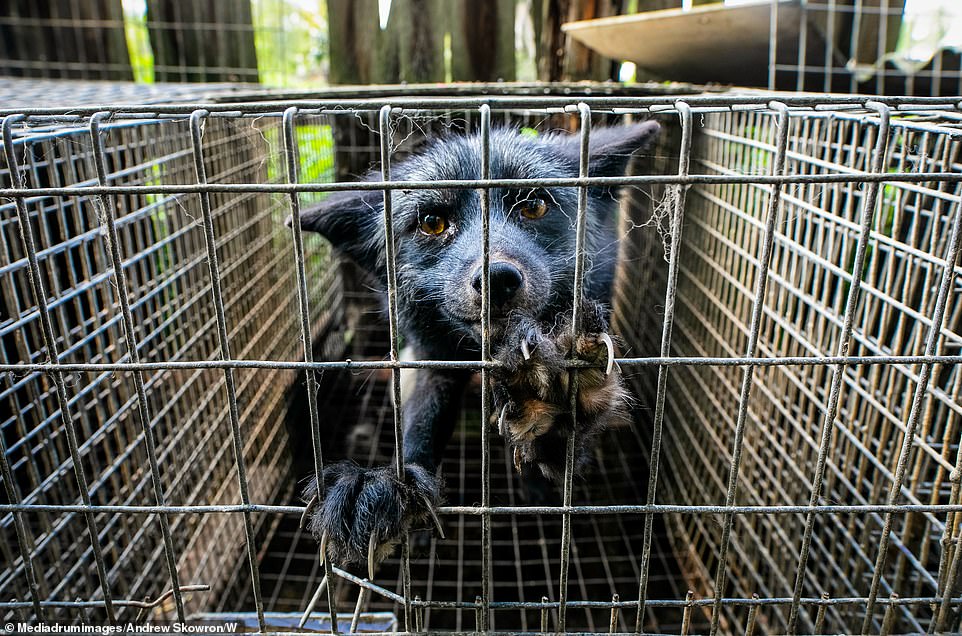 A silver fox is seen in a metal cage in a fur farm in Poland after an investigation found an illegal farm with 60 caged and neglected foxes and dogs. All were rescued and the farm was closed down 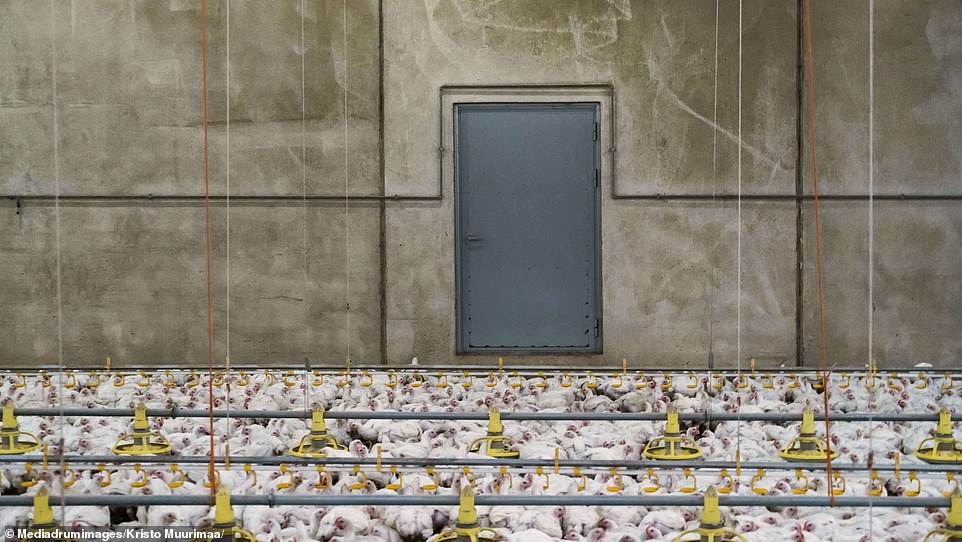 Thousands of chickens are crammed into a huge warehouse in Finland in shocking conditions. The brutal images taken by a team of award-winning photojournalists are featured in the book, HIDDEN: Animals in the Anthropocene 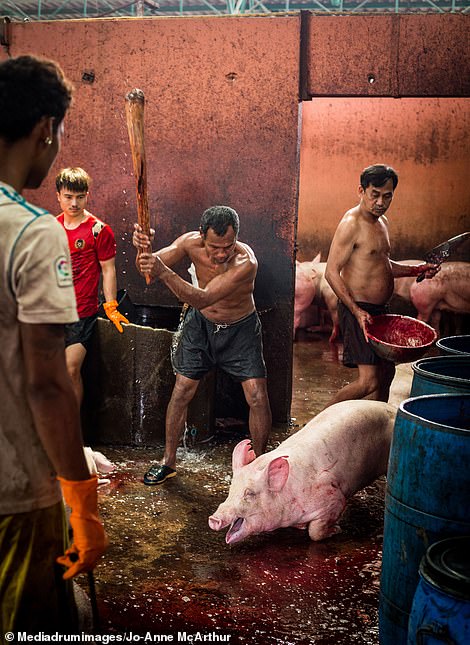 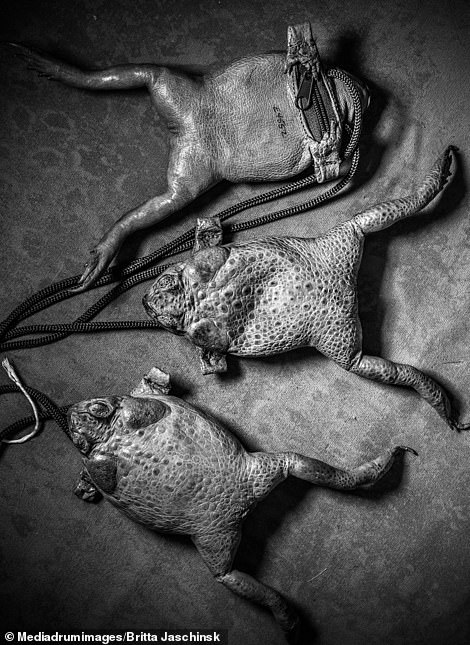 A butcher standing in a pool of blood clubs a pig to stun it and make it unconscious, before slitting the animal’s throat (left), while confiscated frog purses are seen in the US (right), which are made from cane toads and have zippers and straps attached to their bodies 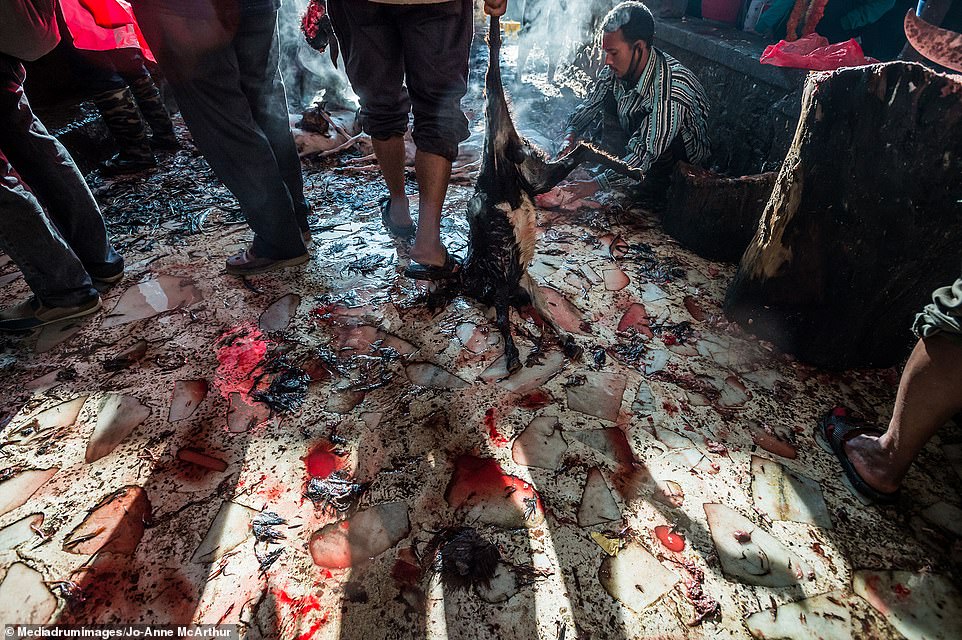 At a temple in Nepal, animals are still sacrificed to Kali, the goddess of time, power, creation and destruction 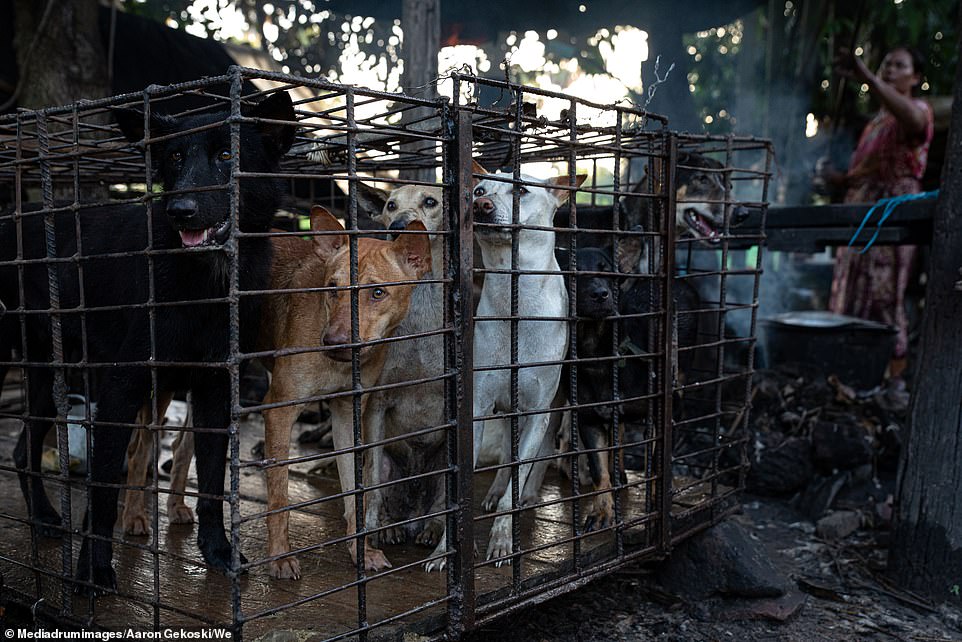 The publisher said: ‘The stories within its pages are revelatory and brutal.

‘They are proof of the emergency confronting animals globally, from industrial farming to climate change, and provide valuable insight into the relevance of animal suffering to human health.

It features the work of 40 of the world’s best animal photojournalists and a foreword by Academy Award-winning actor Joaquin Phoenix.

The vegan star of The Joker said: ‘The photojournalists represented in HIDDEN have entered some of the darkest, most unsettling places in the world.

‘The images they have captured are a searing reminder of our unpardonable behavior towards animals and will serve as beacons of change for years to come.’ 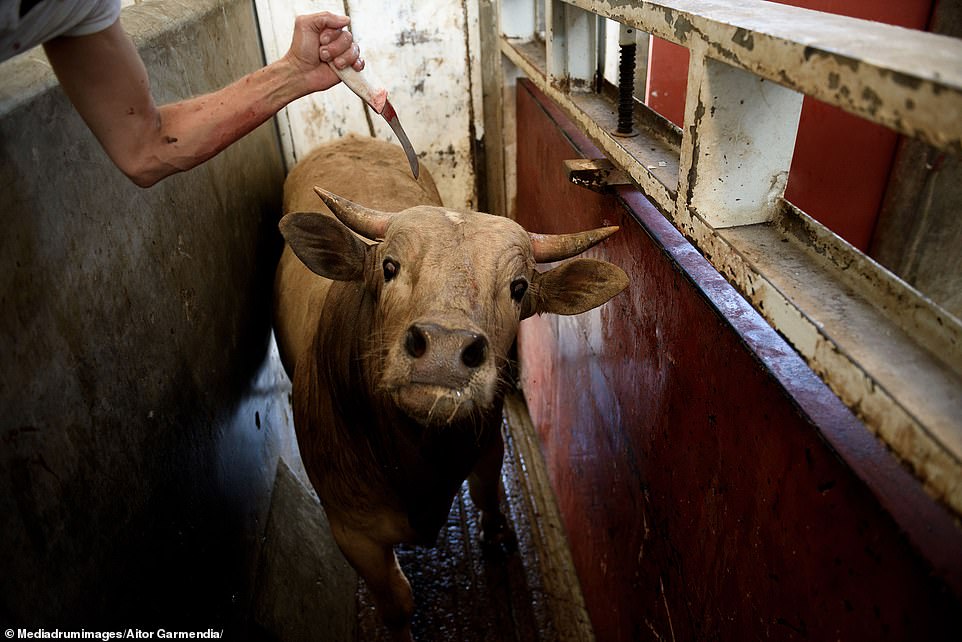 In a Mexican slaughterhouse, cows are immobilized by having a blade thrust into their spinal cord, a process known as pithing 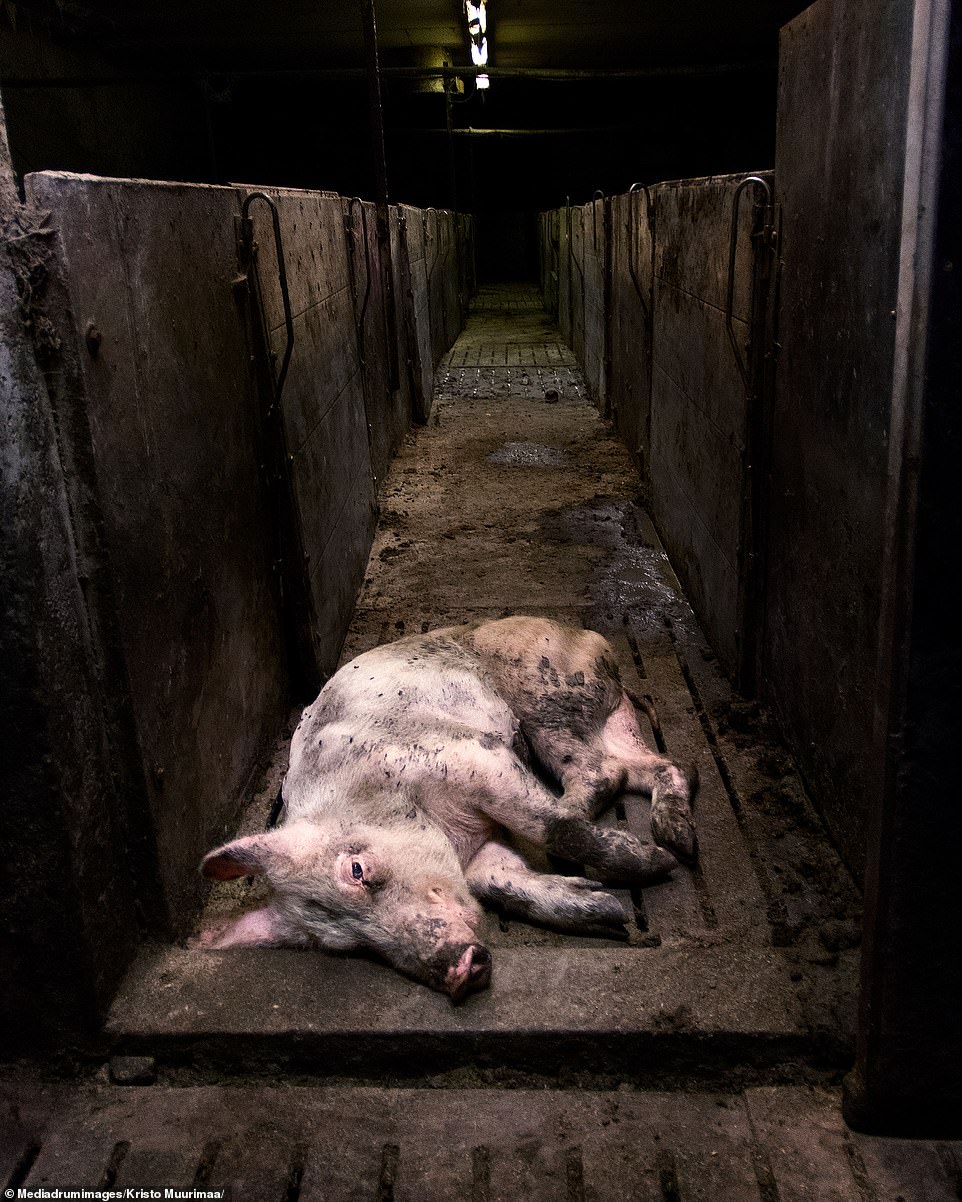 A sick pig is left to die on floor of a corridor of a farm in Finland. The eye-opening book features the work of 40 of the world’s best animal photojournalists and a foreword by Academy Award-winning actor Joaquin Phoenix 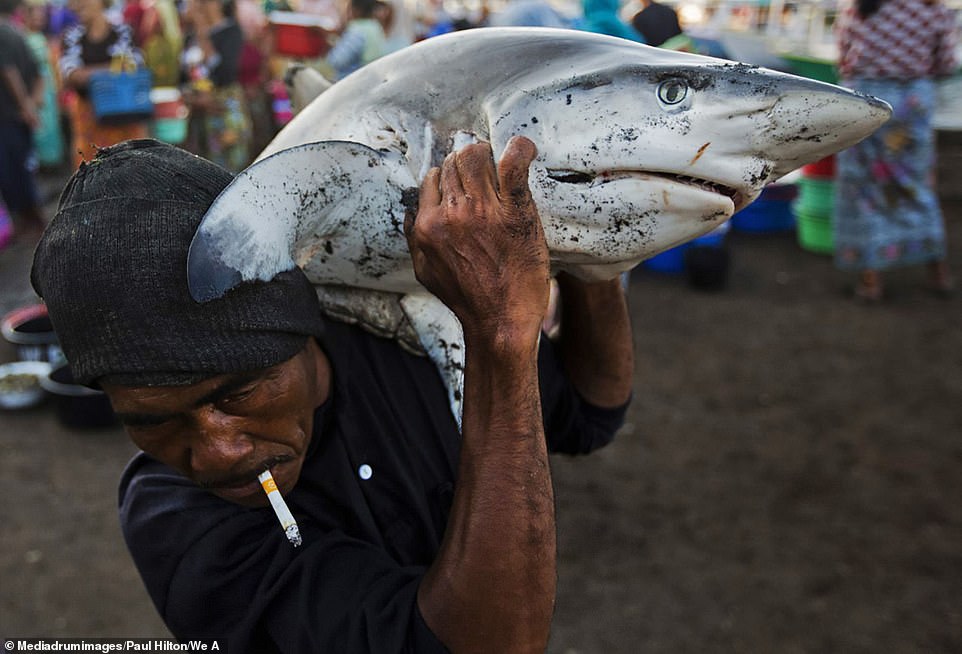 A fisherman carries a shark at a market in Lombok, Indonesia, which is one of the largest exporters of shark fin to China