Angry residents have slammed the National Trust after a post code blunder caused hundreds of motorists to flood into their upmarket village during the Coronavirus pandemic.

Villagers next to historic Belton House say visitors to a lights trail at the Grade I listed Georgian estate drove up their driveways and were even knocking on doors to ask for directions to the entrance.

The traffic chaos was so bad that residents on one lane chose to barricade their street with wheelie bins to prevent further disruption caused by visitors to the country home, near Grantham, Lincs.

Belton villager Bernard Norton claims the National Trust put the misleading post code on tickets and its advertising to take visitors away from the Lion Gates on the other side of the estate.

And Mr Norton, who made a complaint to Lincolnshire Police and the local authorities, said this led to hundreds of cars driving into the village from cities further afield such as Lincoln, Nottingham, Peterborough and Leicester, and to his house.

He has demanded that the trust changes the post code for future events.

The Christmas at Belton House event ran until January 3 and even continued when Lincolnshire was put under Tier 4 restrictions – despite some local opposition.

The event featured the Illuminated Trail, surrounded by over a million festive coloured lights, trees and illuminated installations

Mr Norton said: ‘Hundreds of cars have been coming into the village every night.

‘It is not the visitors’ fault but we have had to barricade our entrance to stop people driving through the gate.

‘Many local people attended and caused no traffic problems whatsoever and I am sure that Tier 4 restrictions were adhered to.

‘However, the Nation Trust provided the company that put on the event the WRONG post code for sat nav users. 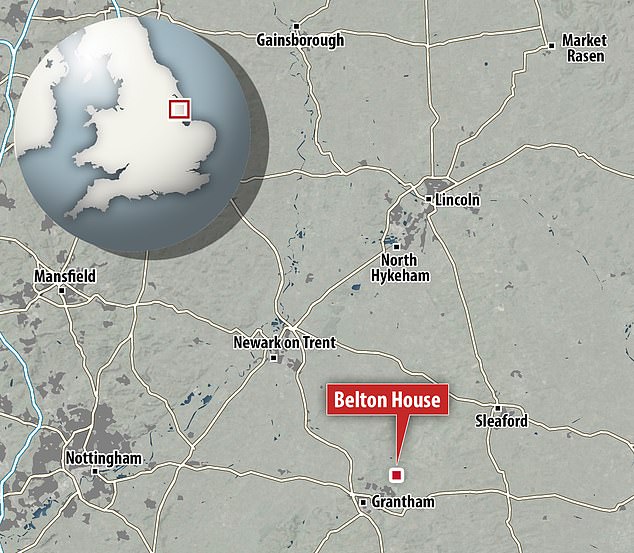 ‘This post code directs drivers to my drive and the neck of a private cul-de-sac that has no turning area that is some 500 metres away from the Belton House entrance.

‘The 200 or so drivers over the 4 hour entrance period following their sat navs drove down the cul-de-sac, entered mine and other residents’ drives, causing havoc.

‘This went on for the duration of the event.’

He said: ‘Washdyke Lane is an unadopted single track lane that leads to a dead end and was initially inundated with vehicles trying to turn around in a very small area or on private drives.

‘This was taking place in the dark and in poor weather conditions, risking damage to vehicles and property, to the extent that residents had to block the entrance to the lane with a wheelie bin with a sign stating ‘not Belton House’.’

A spokesperson from the National Trust at Belton House said: ‘The postcode for the entrance to Belton House and its car park also covers an area of Belton village, and unfortunately a small number of visitors miss the entrance as they drive past. 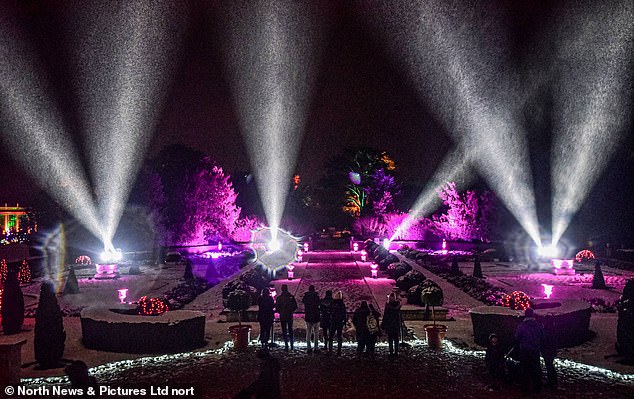 ‘Working closely with the local authorities we have taken steps to mitigate this, including installing additional bright lights around our entrance and signage to increase its visibility.

‘We have been looking into the possibility of creating a unique satnav code purely for Belton’s entrance, which will eradicate this completely in future.’

The light show has attracted thousands of visitors every night and was able to remain open once Lincolnshire was placed into tier 4.

Local county councillor Ray Wootten said: ‘South Kesteven has already seen an increase in reported infections, the highest in any district with 356.7 cases per 100,000 and sadly 10 additional deaths.

‘With reports from the Belton and Manthorpe Parish Council and residents, claiming that social distancing was not taking place, then on safety grounds the event should have been closed.’

The trust added: ‘Before the current national lockdown, in line with Government guidelines many of our places remained open across all tiers in England.

‘In tiers 1 and 2, houses, shops and cafés could open. In tiers 3 and 4, outdoor spaces and toilets could open, and cafes were takeaway only. 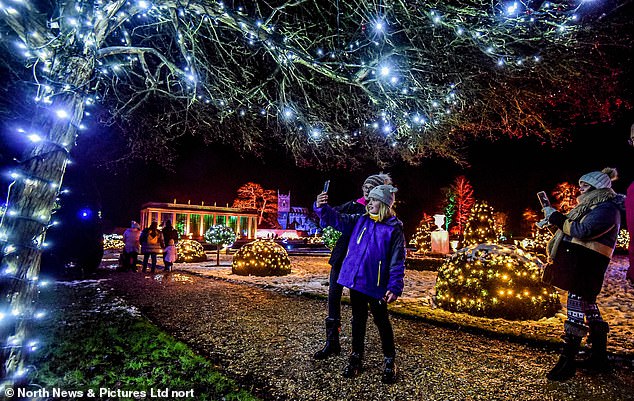 ‘In tier four, shops were closed but outdoor light trails were permitted.

‘The safety of our staff, volunteers, visitors and local communities is always our priority, and we continue to urge people to follow government guidance and restrictions.

‘Belton remains open for the local community to use for exercise during the national lockdown.

‘The booking system is still in place to help manage capacity and enable social distancing, and visitors are asked to look at the property website for information before planning a visit.’