Bosses said it was ‘a strange ‘war on obesity’ that sees pubs and restaurants open before gyms’ after Ministers said they hope to reopen indoor centres in mid-July.

Nearly 90,000 people have signed a petition urging the Government to ‘rethink’ their decision to keep gyms shut and to ‘come to an agreement to reopen them’. 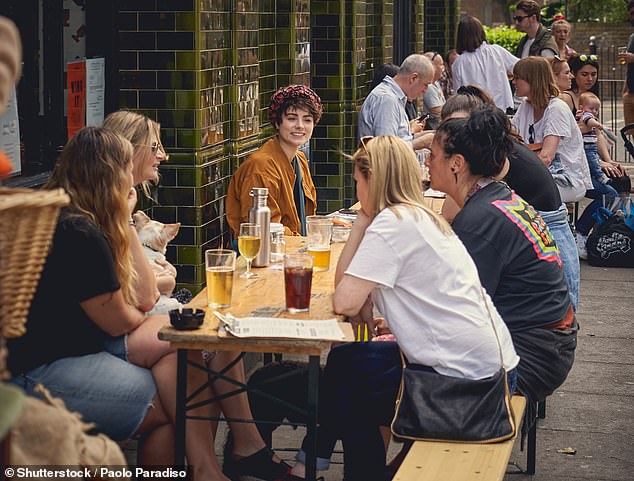 Glenn Earlam, chief executive of David Lloyd Clubs, which has 100 venues across Britain, said it was a ‘completely illogical’ move to open pubs first on July 4.

He said: ‘So what we hear is that pubs and restaurants will be able to reopen, but health and fitness facilities won’t be able to.

‘To us this is bizarre because we are part of the solution. If people come to health and fitness facilities it helps boost their immune system.

‘The chief medical officer has regularly said that health and fitness is one of the best things you can do to protect yourself from Covid-19.’

A spokesman for PureGym, one of the UK’s largest operators with more than one million members, said: ‘We understand that these decisions are not easy, but it is a strange ‘war on obesity’ that sees pubs and restaurants open before gyms. 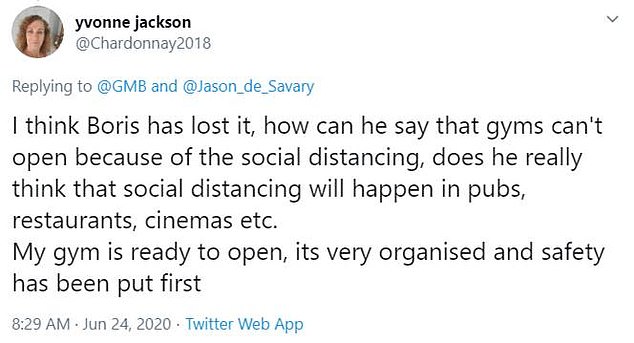 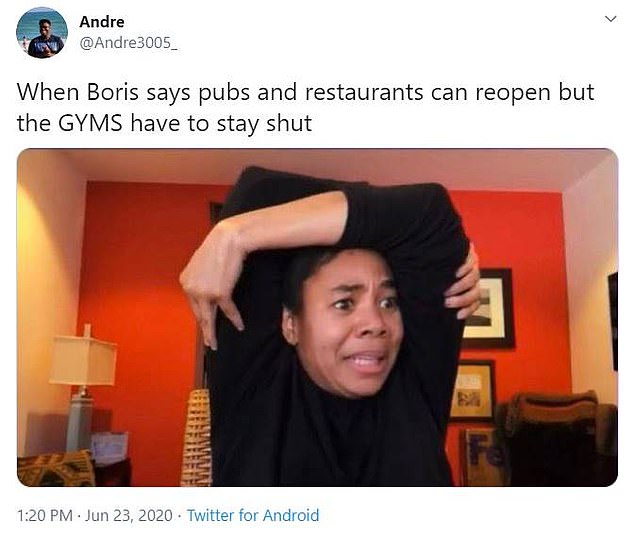 ‘Our facilities are, on average, the size of five or six doubles tennis courts and are exceptionally well ventilated, enabling people to work and exercise safely and securely.’ 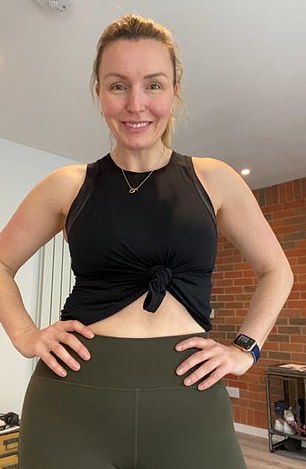 Mr Bannatyne, who runs 72 gyms and health clubs across the UK, accused scientists of ‘playing God with our lives’ as he demanded clarity. His business is losing £2.5million a month due to their closure.

‘We can have a pint, go to a theme park and get our hair done but most of our children can’t go to school and gyms are remaining closed. I appreciate opening gyms comes with challenges, but other countries have managed it.

‘As it stands the fitness industry is on its knees – it’s a huge swathe of our economy, and people’s livelihoods are in serious jeopardy. And of course, there’s the holistic health benefits of working out to consider.

‘I’m working out from home and enjoying it. But when gyms open, I will be first in line. That’s if Boris decides to prioritise our kids and opens school first so I’m not trying to be Wonder Woman and work from home while home-schooling.’

Paul Warner, head of BlitzFitMe in Sudbury, Suffolk, said his personal training facility is ‘100 per cent safer’ than many other types of business that have already opened their doors.

The 45-year-old said: ‘I can literally train someone from 10 metres distance away, because we mainly do one-to-one sessions in the unit.

‘We’ve got automatic hand sanitisers in, I’ve had a guy in today who has demisted the whole thing so it’s all clean.

‘I believe it’s 100% safer than anything they’re announcing or reopening, and even stuff that they have opened.’

Mr Warner added his clients are often people with anxiety, depression or those ‘lacking in confidence’, and demand for his business to reopen is high.

‘Three-quarters of my clients… want to come into the unit, shut the doors behind them so no-one can see them, do their workout, feel great, have a chat and then go home,’ he said.

Health and fitness entrepreneur Mo Chaudry, who owns the WaterWorld indoor aqua park in Stoke-on-Trent, Staffordshire, said: ‘How can it possibly be safer for people to go back into a pub, than it is for them to set foot in a gym? This makes no sense at all – it’s ridiculous. 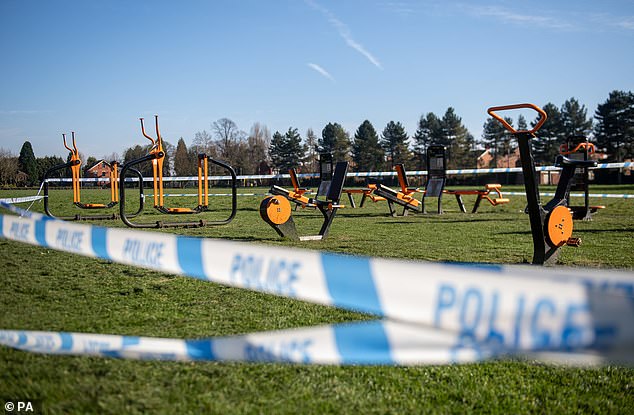 An outdoor gym which is closed in Leicester, on March 26. These facilities will reopen on July 4

‘I’m calling on the Government to urgently rethink this completely illogical policy – not just for the sake of our industry, but for the benefit of people’s health too.’

‘Larger indoor gyms are able to control social distancing much more easily than the majority of pubs. They are spacious, safe and excellently ventilated.

‘Not only that, but the benefits of exercise are enormous to the UK population, both in terms people’s physical and mental wellbeing.

‘Allowing people to lead healthier lives saves the NHS billions – on the other hand, I wonder how much it will cost them in drink-related accident and emergency cases when people pile back into the pubs.’

He added: ‘I believe the health and fitness industry has been betrayed by this latest nonsensical decision. It makes a mockery of the Government’s long-time commitment to tackle obesity when it tells people they can go back into pubs and restaurants, but can’t visit their local gym or pool.

‘The Government itself, and its scientific advisers, have acknowledged that people who lead healthier lifestyles are at a lower risk of being seriously affected by Covid-19.

‘What’s more important for people right now – to lead active and healthy lifestyles, or to be able to eat and drink out?’

Mark Sesnan, managing director of GLL, which operates 270 leisure and sports facilities on behalf of local authorities in the UK, said the plans were ‘misguided and short-sighted’.

He added: ‘The Government has made a potentially catastrophic mistake by leaving community leisure centres, indoor gyms and swimming pools off the list of businesses that can reopen on July 4, nor given any indication when they might reopen.

Former England captain Michael Vaughan, who has previously called on the England and Wales Cricket Board to do more to get amateur and youth cricket going again, was unimpressed by the ‘nonsense’ of upholding the ban on the game for now

‘We all enjoy a pint. But if pubs and restaurants can reopen it defies logic that indoor sports and leisure facilities remain closed – particularly public facilities designed to serve local communities.’

‘It’s not just disappointment that we feel, it’s just utter astonishment at the lack of understanding of the social values that the industry contributes. I’m lost for words.’

Sandy Macaskill, the co-founder of Barry’s Bootcamp London, told Sky News today: ‘They (the Government) are in a very difficult position, but I think the decision to open pubs before gyms is ludicrous.

‘We can operate safely at two metres. The point about the lack of understanding is that we already do this, we already operate with social distancing in place. 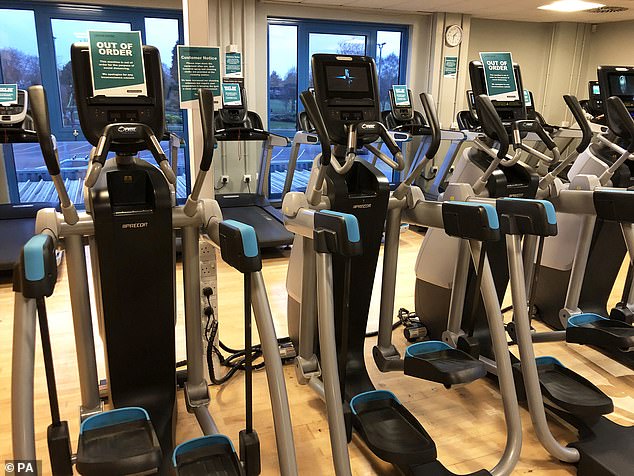 Notices on exercise equipment at a now-closed gym in Long Eaton, Derbyshire, on March 20 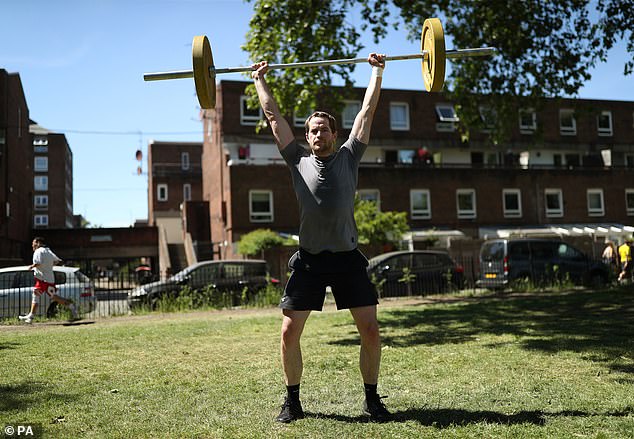 Richard Craig, of CrossFit Hackney, lifts weights at London Fields park in East London in May

‘Our clients are used to it, it’s not like pubs where everyone’s having to change the way they do things, we already do it.’

And ex-England captain Michael Vaughan, who has previously called on the England and Wales Cricket Board to do more to get amateur and youth cricket going again, was unimpressed by the ‘nonsense’ of upholding the ban on the game for now.

He tweeted: ‘Hand sanitiser in every players pocket … Use every time you touch the ball … SIMPLE … Recreational Cricket should just play from July 4th … utter nonsense it’s not being allowed back.’

Asked in the Commons about cricket, Mr Johnson said: ‘The ball is a natural vector of disease, potentially at any rate, and we’ve been round it many times with our scientific friends. At the moment we’re still working on ways to make cricket more Covid-secure, but we can’t change the guidance yet.’

Bowling alleys, water parks and casinos will also not be allowed to reopen. 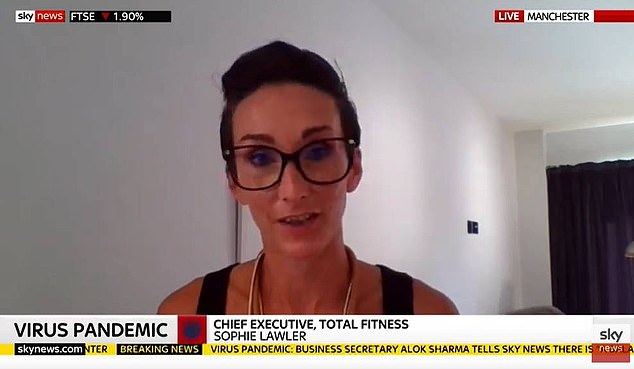 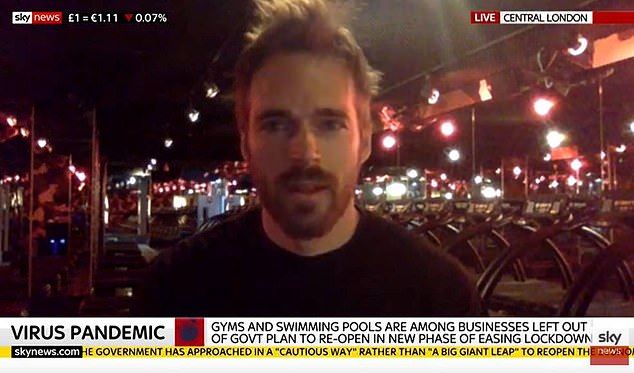 Sandy Macaskill, the co-founder of Barry’s Bootcamp London, told Sky News today: ‘They (the Government) are in a very difficult position, but I think the decision to open pubs before gyms is ludicrous’

Indoor sports and dance venues and skating rinks will stay closed but outdoor gyms will be allowed to reopen.

Culture Secretary Oliver Dowden said many people were ‘keen to hit the gym’ but the aspiration was to reopen gyms and leisure facilities in mid-July.

Live performances at concert halls and theatres are also still banned, partly due to the risk posed by singing in spreading the virus. Outdoor gyms and playgrounds will be returned to use.

Mr Dowden said: ‘Many people keen to hit the gym and keeping Britain fit is key in Covid battle.

‘We’ve made lots of progress and I know steps businesses have taken to make their spaces and equipment safe. 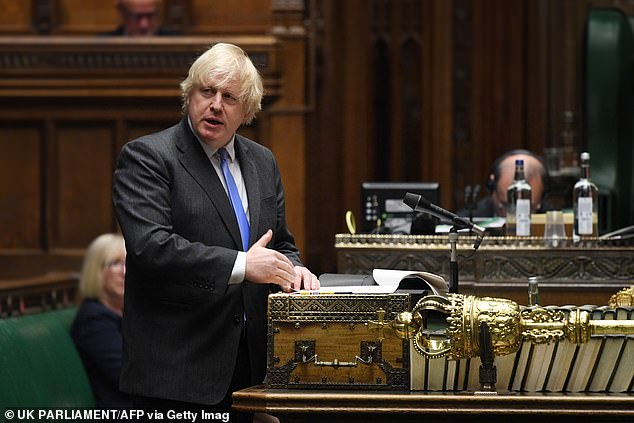 ‘Subject to public health, our aspiration is to reopen gyms and leisure facilities in mid-July.’

It is understood gyms are not yet allowed to open because of the level activity that goes on and the number of surfaces touched, which is said to pose a ‘far greater risk’ of catching coronavirus.

The Prime Minister’s spokesman said: ‘We will be working hard with these sectors to allow them to open as soon as we can. We need to make sure it is safe.’

Boris Johnson told the House of Commons yesterday that ‘difficult judgements’ had been made in deciding which firms were able to reopen.

Addressing close-proximity businesses such as nightclubs, Mr Johnson added that taskforces with public health experts will help them reopen ‘as soon as possible’. 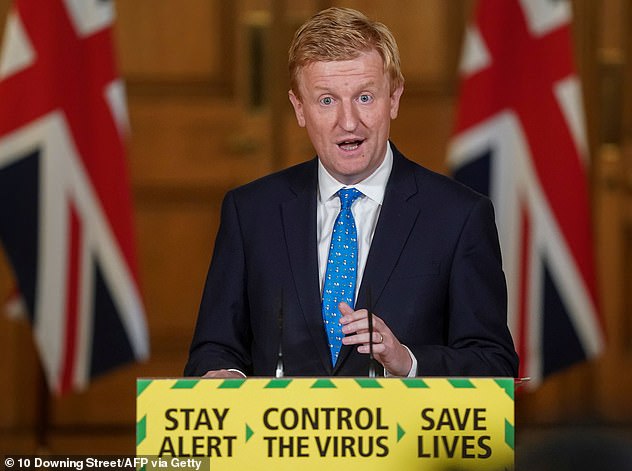 Culture Secretary Oliver Dowden said it was an ‘aspiration’ to reopen indoor fitness within weeks, after they were left off a list of venues that will be allowed to reopen on July 4 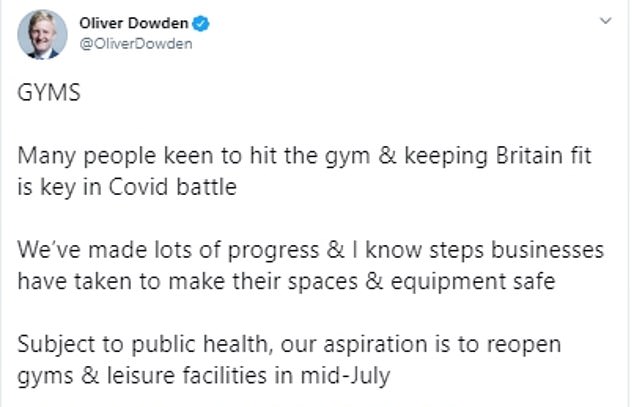 The trade body representing the night-time economy has welcomed the decision to allow some businesses to reopen, but warned that many businesses will struggle.

Michael Kill, chief executive of the Night Time Industries Association (NITA) called on the Government to give further financial support to businesses in the sector.

He said: ‘For many of our members, including nightclubs, casinos and some pubs, restaurants and bars that can’t meet the one-metre social distancing obligations, the nightmare of enforced closure goes on.

‘Businesses operating in the night-time economy have needs distinct from those operating in more general hospitality and it would be unforgivable if those needs are not taken into account by Government.’