My flat has taken me more than 17 years to sell – is this a record? It’s certainly a sad and sorry tale.

In 1999, I bought three investment properties in Worthing, West Sussex, with my then partner, John Sandilands.

We decorated and furnished them and rented them out. The idea was that they would help to provide our pensions in retirement.

However, John died suddenly in 2004 and my carefully laid plans were thrown up in the air.

Tricky sale: Angela’s Worthing flat – which she first put it on the market in 2005 – has a sea view and a wonderful communal garden

I decided to sell our jointly held flats and combine the proceeds to buy one larger property. I managed to sell two of the apartments but the other one stuck. And stuck and stuck.

I first put it on the market in 2005, and in 2022, it remains there, although it has now gone under offer for at least the tenth time.

Every potential sale has fallen through, for one reason or another and often, frustratingly, at the point of exchange.

The flat is a large seafront studio. It has a sea view and is housed in a beautiful mid-Victorian listed building, formerly a hotel.

In front of the building is a wonderful communal garden which is well kept by the local council.

Both the building and its location have a lot of aesthetic appeal, and one might have thought it would make an ideal purchase for a first-time buyer, an investor, or as a holiday home.

It is also mortgageable, unlike some studios which are so small they can be bought only for cash.

Not long after the flat first went on the market, I had an offer which I accepted.

Solicitors were instructed, and all the mounds of paperwork that go with selling a leasehold apartment, were gathered together.

And then, just as I thought that contracts were about to be exchanged, the selling agents called to say that the buyers had lowered their offer; gazundering me, in fact. 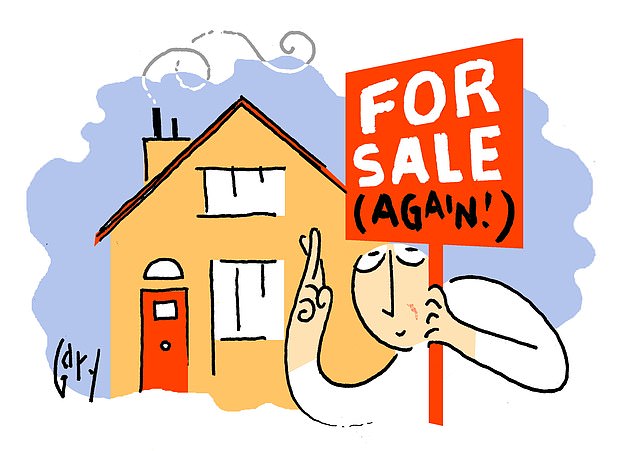 Money pit: Every time a deal fell through, Angela was landed with a solicitors’ bill for the ‘abortive’ sale

The nasty but not illegal practice of gazundering, reducing the offer at the last minute, was at its height in the mid-2000s, although you don’t hear so much about it now.

I was not prepared to accept the insulting lower offer and though the gazundering wheeze was not repeated, the pattern of the property going under offer and the buyer pulling out, often after contracts had been signed, became a never-ending scenario.

The situation was not helped by my move to Oxford, which meant I was not on hand to oversee the potential sales or meet prospective buyers.

In a way I was lucky in that every time it failed to sell I put it back on the rental market and it rented out instantly, usually to a young professional but occasionally to a couple.

I had no problem with the tenants, even though I was living so far away, and they all paid rent and kept the place reasonably neat and tidy.

Between tenancies, I would travel to Worthing to replace carpets, have the place redecorated or install new white goods or a shower unit.

I made sure I kept it in good nick and that was probably the main reason why it rented out so readily. But even that had its downsides.

One tenant refused to move, even after I’d given her notice, and contacted Citizens Advice who advised her that she could not be made homeless, and so yet another sale fell through.

Getting rid of tenants can be a problem and was often a reason for sales not completing as buyers, understandably, require vacant possession.

And every time a sale fell through I was landed with a solicitors’ bill for the ‘abortive’ sale. The flat has now gone under offer for the fifth time in a year, and finally, I am hopeful that it will change hands.

My buyer this time is a seasoned investor rather than a flaky first-timer struggling to secure a mortgage.

So why have so many buyers pulled out after making an acceptable offer? Some fell by the wayside because they lost their jobs or could not find suitable ones in Worthing; and in one situation, a buyer was supposed to be coming into an inheritance that never materialised. 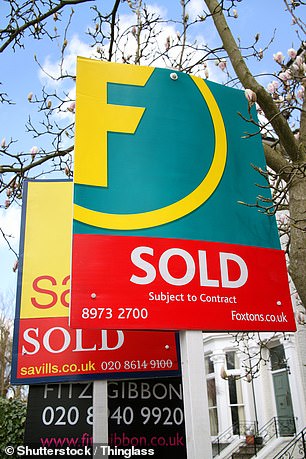 Subject to contract: The property went under offer time and again, but successive buyers pulled out

The property in some cases was valued by mortgage lenders at a price far lower than I was prepared to accept. Others discovered that because it was a listed building, they could not make the alterations they had planned to do.

I don’t believe Covid adversely affected the sales, as they had been falling through for many years before the pandemic. There may have been some slight effect with so many offers not completing in a single year, but it’s hard to say.

At the best of times, studios are possibly the most difficult properties of all to shift as although they are always at the bottom of the market, price-wise, they have several disadvantages.

One is they are basically glorified bedsits and cannot always be turned into a one-bedroom flat, which is what most people prefer.

And in handsome old buildings, maintenance is expensive and always ongoing, which means high service charges relative to the square footage.

Plus, because of the large number of documents required with leasehold properties, solicitors’ fees can be high as well. So, while seemingly cheap to buy, they may not be the bargains they appear.

And yet there are pluses. Because my flat was priced at £125,000, it did not attract stamp duty and as a listed building, it is exempt from requiring an energy proficiency certificate.

The listed status means that it is not possible to make it more energy-efficient, although estate agents tell me that few buyers even glance at the certificate when deciding whether to make an offer.

Now, though, at last, commutavimus! We have exchanged! (It sounds better in Latin.) Finally, the champagne is on ice.