EXPRESS INFORMER > News & Politics > ANDREW PIERCE: Spare us your winks and get a grip, Becky!

ANDREW PIERCE: Spare us your winks and get a grip, Becky!

Sir Keir Starmer managed to find a place in his Shadow Cabinet for onetime ‘Continuity Corbyn’ candidate Rebecca Long-Bailey — whom he trounced in the Labour leadership race. Nicknamed ‘Wrong Daily’ after a string of gaffe-laden interviews, she was handed the plum role of Shadow Education Secretary in a sop to Labour’s bruised hard Left. So how has the Salford MP taken to the role in this time of unprecedented crisis? As ministers grapple with school closures and cancelled exams, Long-Bailey takes the time to tweet: ‘Never has there been a more important time to fight for a public education service, free at the point of use.’ Is Ms Long-Bailey using the coronavirus crisis to revive last year’s Labour conference pledge to abolish private schools?

Rebecca Long-Bailey, Shadow Secretary of State for Business speaks during the Labour Party Leadership hustings at the Radisson Blu Hotel on February 23, 2020 in Durham, England.

It would appear so. Little noticed in her recent letter to Education Secretary Gavin Williamson was her demand for the ‘integration’ into the state sector of any private schools that hit money problems because of the pandemic. Exploiting a pandemic to nationalise schools: that really takes some gumption. ‘Becky’ has been known to add toe-curling ‘winking’ emojis to her tweets. Steve Mastin, a state school teacher and vice president of the Conservative Education Society, writes on the ConservativeHome website: ‘Long-Bailey is a part of that Corbyn brigade where virtue-signalling is more impor – tant than facts… Schools are doing their best to provide education and support to parents in challenging circumstances. So, Becky, please don’t wink or smirk. Support. Advise. Show you take the job seriously.’ Couldn’t have put it better myself. 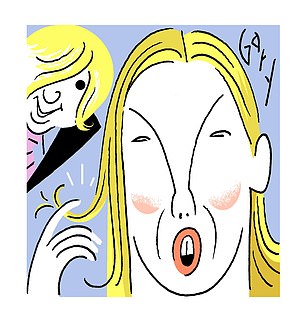 Former Tory sports minister Tracey Crouch has taken issue with reports that ‘senior figures’ in the Government want to keep hairdressing salons closed for another six months. ‘I wonder how many of these senior figures are women with split ends, roots that need doing or have a fringe out of control?’ she asks. Fair point. But for now, perhaps hirsute MPs could get a few tips on managing their moptops from Tory Michael Fabricant?

Bone of contention for Raab

Tory MP Peter Bone was ahead of his time in 2013 when he proposed a Bill for a defined line of political succession if a PM becomes incapacitated. Seven years later, Bone’s Prime Minister (Temporary Replacement) Bill is back for debate in the Commons in July. And it could cause something of a fracas. The Bill, which would establish in law the post of Deputy Prime Minister, won’t do much for the self-confidence of Boris’s current de facto deputy, Foreign Secretary Dominic Raab. After the Deputy PM, Bone’s plans would see the Home Secretary next in line, followed by the Defence Secretary and the Chancellor. The Foreign Secretary is only in fifth place. Sorry, Dom.

Poet Pam Ayres has the measure of President Trump, who last week ludicrously suggested that patients with coronavirus might be treated by injecting disinfectant. She writes: ‘At last, we have a cure for all! / Ailments large and ailments small, / Good health is not beyond my reach, / If I inject myself with bleach. / Radiant, I’ll prance along, / Every trace of limescale gone, / With disinfectant as my friend, / Like him, / I’m clean around the bend.’ Hard to disagree.

When he was Shadow Chancellor (until only three weeks ago), John McDonnell used to make a great noise about publishing his annual tax returns. Mocking some Tories’ unwillingness to do the same, he suggested it was the duty of politicians to be transparent. Yet this year, his duty seems to have eluded him. Could it have simply slipped his mind to release his tax returns? I suspect not.

Hero MP of the week: Nurse-turned Tory MP Maria Caulfield, who is back in her old job. ‘Just finished latest shift at hospital,’ says the member for Lewes. ‘Nose, ears and throat sore from wearing mask for last 48 hours. But not complaining as despite media reports we have plenty of PPE. Love being back working in the NHS.’