Fallen TV star Andrew O’Keefe has been seen kissing a mystery woman as he faces another court date for allegedly taking ice and cocaine a little over two weeks after his tenth stint in rehab.

O’Keefe was spotted having a dip on Wednesday with a red-haired woman in an orange bikini at secluded Lady Martins Beach in the affluent Sydney eastern suburb of Point Piper.

The former host of Deal or No Deal and Weekend Sunrise smiled and appeared to be in good spirits despite his many alleged offences including choking a sex worker and unrelated AVOs. 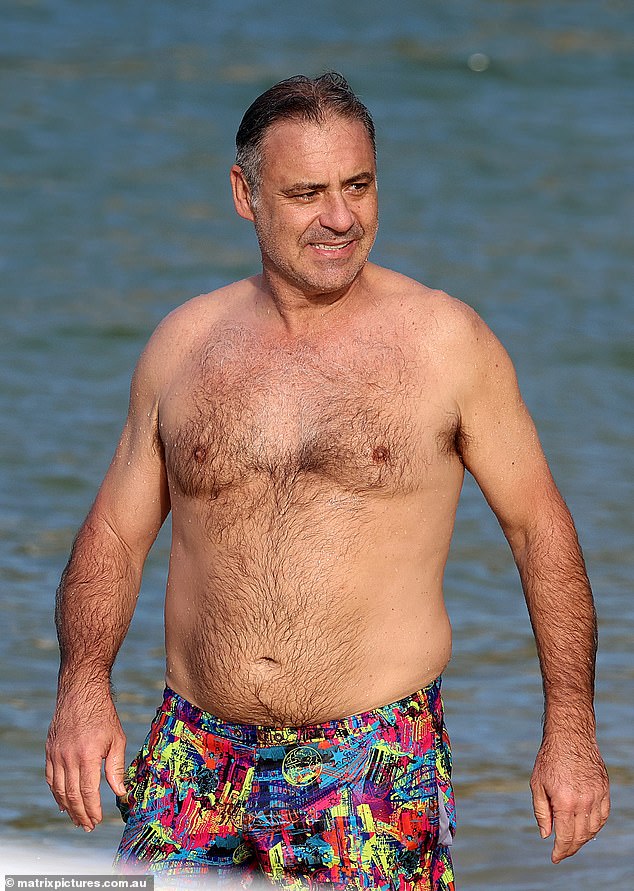 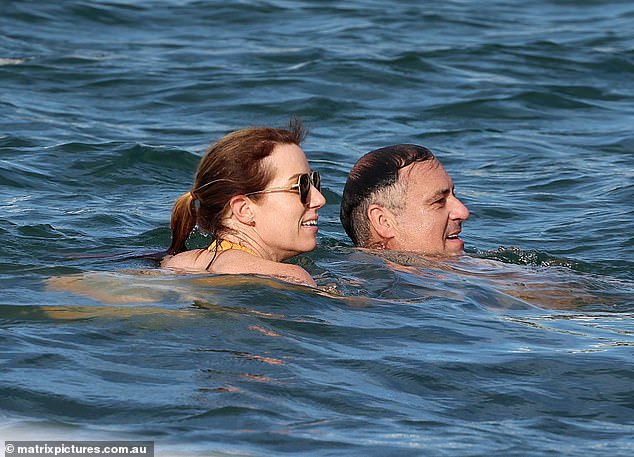 O’Keefe, who is facing fresh charges over breaching bail conditions, was seen enjoying the water with the unnamed woman 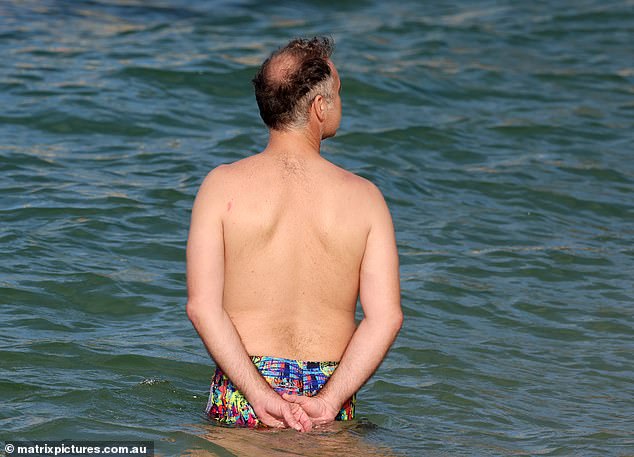 O’Keefe spent some time in the water and was joined by his female companion as they kissed and laughed.

After drying off, the loved-up pair departed the beach arm-in-arm.

O’Keefe was later seen strolling in the neighbourhood wearing the same T-shirt but different shorts from when he left.

It appears to be a rare ray of sunshine in the troubled life of the once golden boy of TV who in November was arrested and allegedly  tested positive to drugs on the same day his court-ordered minimum six month treatment was due to expire.

The Connect Global rehabilitation centre, where O’Keefe was driven to straight from prison on May 23 as part of his strict bail conditions, released him some time after November 4.

O’Keefe allegedly tested positive to cocaine and methamphetamine when police swabbed him at his Vaucluse home about 1am on November 24 after a man seen leaving the premises was found carrying prohibited drugs.

Police allege O’Keefe breached his bail by testing positive to the drugs – which O’Keefe denies, claiming the swab was ‘contaminated’ after exiting drug rehab. 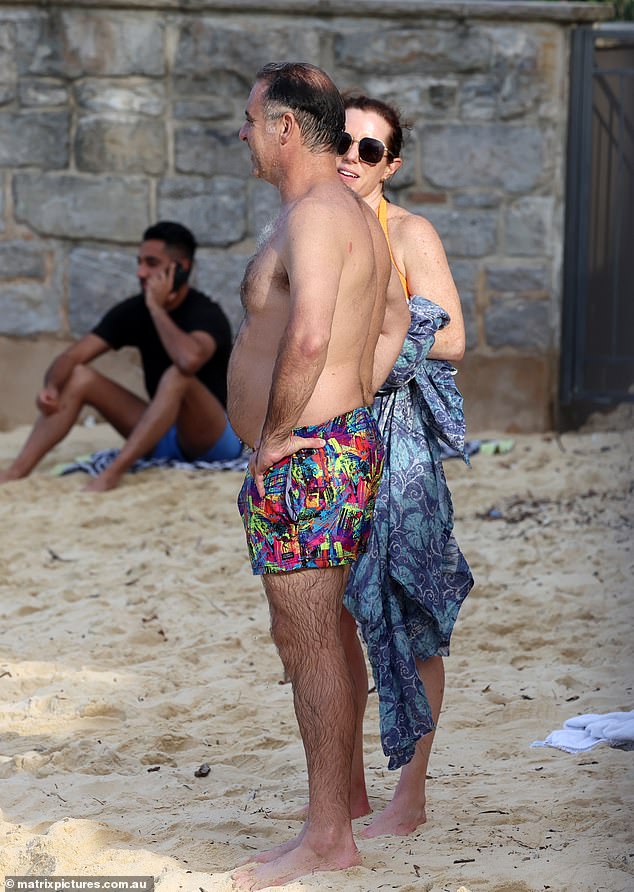 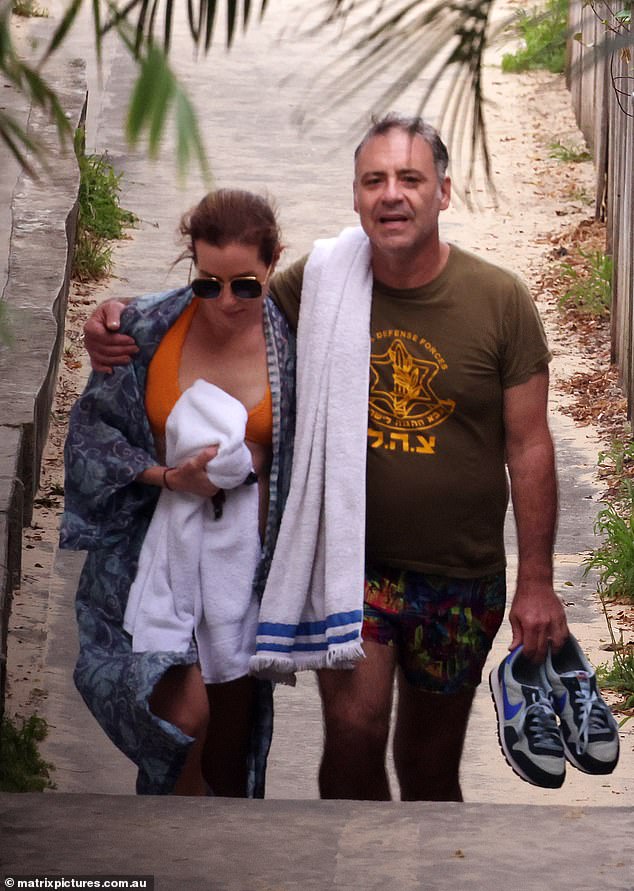 Following their dip, the pair were seen wandering off together arm-in arm 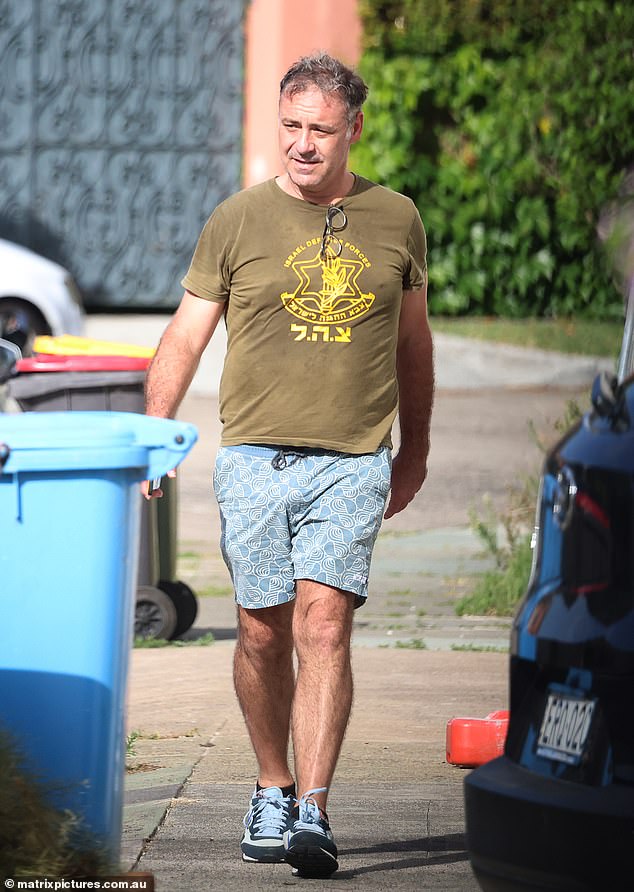 After his beach swim, a refreshed and relaxed looking O’Keefe was spotting walking around the Point Piper neighbourhood 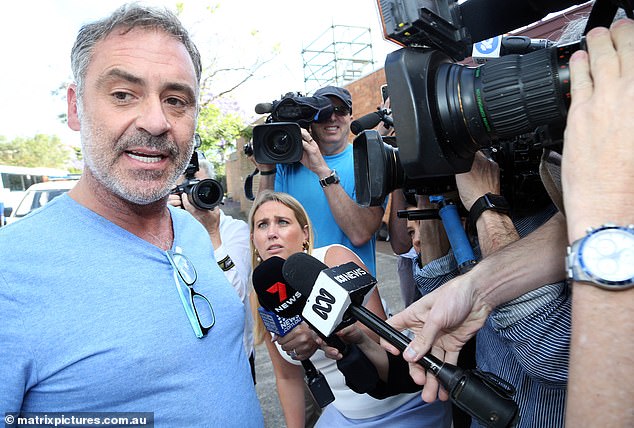 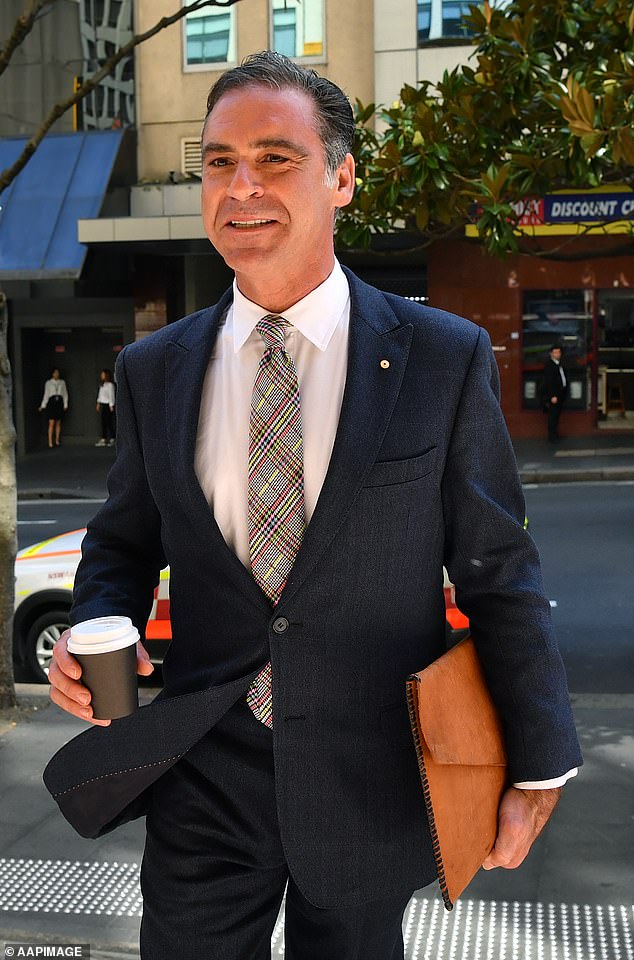 O’Keefe was a Channel 7 host for 17 years before the network chose not to renew his contract in January 2021, preceding an alleged assault of a woman in September that year, a choking charge against a sex worker in January 2022 and drug charges

Mr Pene said O’Keefe had decided not to undergo the extension program, which includes weekly drug testing, until 2023 and was ‘due to start on January 1’.

He said O’Keefe had done ‘so well’ on the program and was ‘such a good influence’ which was why he was surprised by the alleged drug lapse.

‘He was brilliant, clean as a whistle,’ Mr Pene said.

In late September, O’Keefe spoke from rehab where he was working as the resident cleaner, congratulating Connect Global graduates and praising his ‘band of brothers’ for getting clean.

At the time he was four months into a stay ordered by NSW Supreme Court Justice Robert Hulme.

Justice Hulme ruled on May 23 the former TV star be treated for his ‘significant descent into an erratic and chaotic lifestyle’, and that his brother, Phillip O’Keefe, drive him immediately from Silverwater to Connect Global in Swan Bay, about a 200km trip.

O’Keefe’s tenth attempted stint in rehab came after he was charged with intentionally choking a sex worker that he allegedly pushed to the ground before punching and kicking in his Sydney CBD apartment.

In just six weeks’ time O’Keefe is due to face trial on those counts among a total of 13 charges including resisting police, contravening an Apprehended Violence Order (AVO) and drug possession.

Since the charges the downfall of O’Keefe’s career and 17 years as a star in the Seven Network stable has come to light.

The son of a Supreme Court judge, the nephew of a rock legend, and a former private schoolboy turned popular television personality, O’Keefe was recognised just five years ago with a Medal in the Order of Australia for his screen and charity work.

However, his two-decade entertainment career and 10 years as a campaigner against violence towards women began to unravel in 2020.

Earlier this year it emerged why Seven terminated his contract in January 2021 after so many years at the top as one of Australia’s best-loved stars.

Seven’s sacking occurred soon after O’Keefe’s chauffeur reported him for allegedly lighting up an ice pipe on the way home from work.

Network executives had hired O’Keefe a personal chauffeur to get him to and from work without any trouble, and were allegedly horrified when the driver made a complaint about the star’s alleged drug use. 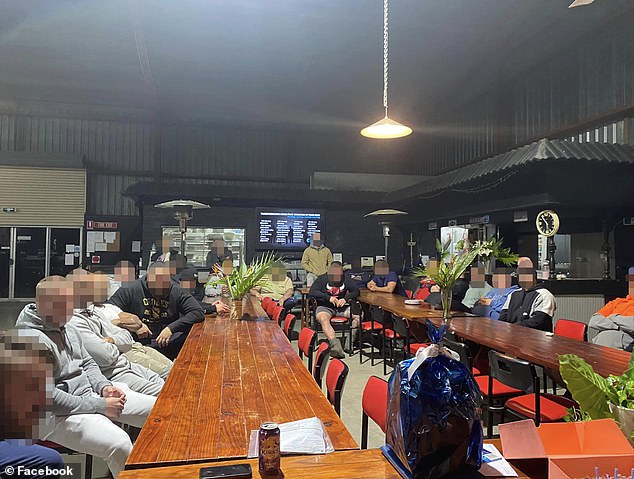 It’s alleged the driver looked in his rearview mirror while driving O’Keefe home some time between October and November 2020 and saw the then 50-year-old lighting an ice pipe.

The driver alleged that the fumes were so strong he was worried he’d be affected by the drug while driving.

O’Keefe denied the driver’s allegations when they were put to him by management, but within weeks he found himself out of a job.

‘He’s someone who’s been privileged, spoiled, indulged, treated like a celebrity – and the power goes to his head. He has a very quick mind but he lacks discipline; he’s stuck in that cycle of indulgence,’ an insider told The Australian.

O’Keefe separated from his wife and the mother of his three children, then had a failed relationship with a woman over whom charges he is now contesting were laid.

While 2022 may not have dawned completely untroubled for O’Keefe – who in early January was already facing domestic violence and police assault charges from five months earlier.

With 2022 now ending, it may prove to be his year from hell – with O’Keefe’s TV appearances amounting to an epic meltdown in the back of a police van, and rants outside court claiming persecution and victimhood which have won him few fans.

The one-time The Chase Australia host would not have celebrated the festive season by cracking open the champagne with his strict bail conditions requiring him to abstain from alcohol or illicit drugs, and to be drug tested each week. 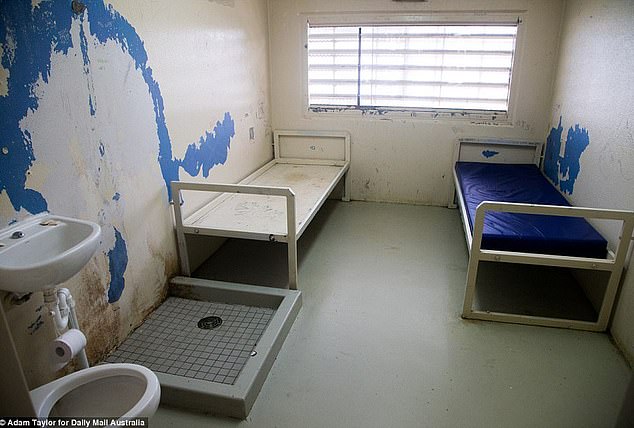 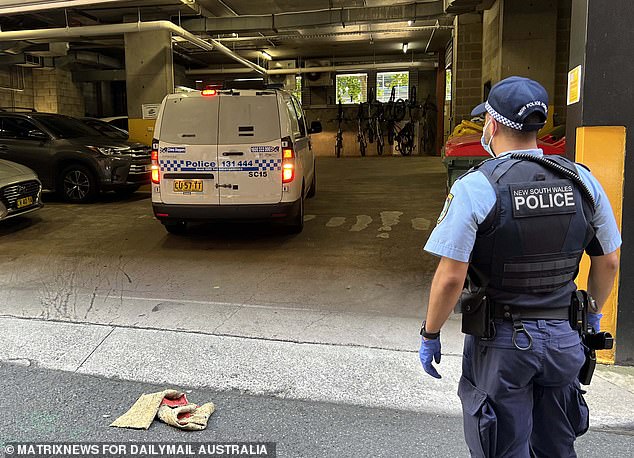 At his looming trial, listed for two days from February 6, O’Keefe plans to strongly contest charges of intentionally choking a person, common assault, and assault occasioning actual bodily harm (AOABH), and claim he acted in self-defence.

The choking and AOABH charges relate to an alleged incident in January last year, on the day before Australia Day, when the then 50-year-old was visited at his Sydney CBD apartment by the former sex worker ‘to discuss establishing a flower business’.

She claimed to police an argument broke out that allegedly resulted in the ex-TV star punching her and putting her in a headlock.

The woman, who cannot be named, alleged to police she had to bite O’Keefe’s arm to break free during one of the episodes of choking.

Two days later, police arrested O’Keefe and took him to Day Street police station where TV cameras were on hand to film him screaming and swearing while writhing around in a pair of red trousers and kicking the walls of a police van. 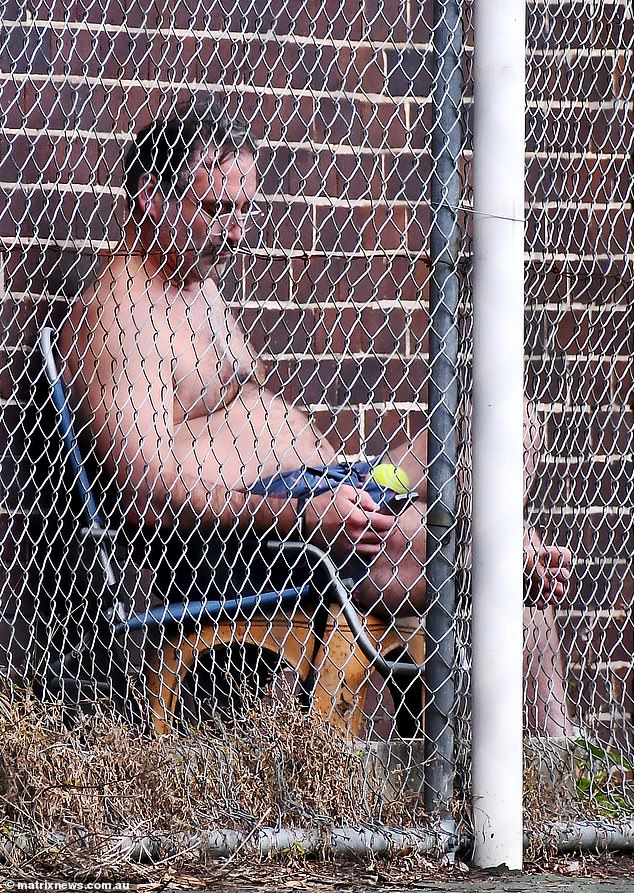 O’Keefe,  pictured outside a unit in Paddington in Sydney’s inner-city in February 2021, allegedly failed a drug test after walking from his tenth stint in drug rehab

The former ambassador for the anti-domestic violence White Ribbon charity lashed out, yelling ‘F*** you, I’m a victim of crime. I’m a victim of crime you f***wits. F*** off, get rid of these f***ing journalists, you douchebags,’ after he was placed in the wagon for transportation to the Sydney Police Centre, where he spent the night behind bars.

O’Keefe was thereafter taken in a prison van to the Metropolitan Remand and Reception Centre, at Australia’s largest correctional complex at Silverwater in western Sydney.

On February 11, he pleaded not guilty to six charges relating to the alleged attack in his apartment, but guilty to possession of 1.5 grams of cannabis.

Police also seized his phone on the same day, and charged O’Keefe with breaching an apprehended ­violence order taken out to protect a person who legally cannot be named.

At a brief court appearance after his police van meltdown, the former TV star sighed and groaned as he heard he would be remanded in custody, rolled his eyes and yelled: ‘No justice – oh God, this is ridiculous. Unbelievable.’

At one stage he pointed at his neck and blurted out: ‘It was not violent – there was no choke!’

On March 8, O’Keefe applied for release on bail, proposing to enter a Sydney rehabilitation clinic for three weeks, which Supreme Court Justice Robertson Wright deemed inadequate and refused the application.

His Honour said O’Keefe had a ‘very long-standing and significant’ drug problem, citing a NSW Justice Health report which described his graduation from using cocaine to crystal methamphetamine, or ice, while receiving treatment from a psychologist and psychiatrist in 2021.

O’Keefe, whose last TV job hosting The Chase Australia for six years ended in that year, had bipolar and substance abuse disorders, and was exposed to ‘bullying and taunts’ from Corrective Services officers because of his ‘previous profile’, the court heard.

On May 23, O’Keefe again applied for bail in the NSW Supreme Court, this time before Justice Hulme, who agreed to his immediate release to the drug and alcohol rehabilitation centre 200km north of Sydney.

January 1, 2022: Year begins with O’Keefe still facing domestic violence, contravene AVO and assault charges from September 2021 against a woman and police, after having DV and common assault charges dismissed in June that year against his ex-partner.

January 25:  Police allege O’Keefe grabbed a female sex worker by the throat, pushed her to the ground, and punched and kicked her at his unit

January 27:  After being arrested and charged, O’Keefe has epic meltdown in back of police paddy wagon before refused bail and locked up in Australia’s largest men’s prison, the MRRC at Silverwater

February 11: O’Keefe pleads guilty to possession of 1.5 grams of marijuana

March 8: Fails in a bid for release on bail before Supreme Court Justice Robertson Wright

March 9: O’Keefe explodes during AVL court appearance from jail, saying he is segregated with bikies, taunted by prison guards and claims he is the victim

May 23: The Supreme Court grants O’Keefe bail on condition of his immediate release from Silverwater to a drug and alcohol rehabilitation centre for at least six months

September 29: O’Keefe congratulates graduates at the Connect Global rehabilitation centre near Port Stephens where he has been living for four months, praising his ‘band of brothers’ for getting clean

November 24: O’Keefe is arrested at his Vaucluse home for allegedly breaching his bail conditions and allegedly having cocaine and methamphetamine detected in his system after police arrest a man allegedly with drugs leaving the property.

He is released on strict bail conditions including a weekly drug test and outside court delivers a furious spray at authorities, blaming the justice system and claiming the drug swab was contaminated.

December 14: O’Keefe faces court as a date is set for the hearing on the sex worker assault charges in early February, 2023