Today, Money Mail can reveal the winner of our 2022 Wooden Spoon Award for poor customer service is… British Gas.

The energy giant scooped almost a THIRD of the votes in our annual poll. John Lewis took silver with 13.8 per cent of the votes while BT scooped bronze with 13 per cent.

Hundreds of readers voted, selecting from a list of eight nominees announced at the beginning of December.

Out of gas: Chris O’Shea, boss of British Gas parent company Centrica (pictured in a mock-up) refused to collect the trophy

In a year of soaring energy bills, you complained about long call wait times to speak to staff at British Gas, inaccurate billing and missing Government support vouchers.

And you were infuriated to learn that profits at British Gas’s parent company Centrica boomed last year while service levels fell.

To add insult to injury, Centrica boss Chris O’Shea turned down repeated requests from Money Mail to discuss his firm’s woeful service and explain how he was putting it right.

He also refused to accept the trophy in person — as bosses have traditionally done for our Wooden Spoon Awards, from the director of HM Revenue & Customs to the chief executives of major banks and telecoms giants. So we have been forced to mock up a picture of Mr O’Shea holding it.

We make no apology for this: customer service matters and many loyal British Gas energy users will fear Mr O’Shea’s reluctance to engage on the issue means he doesn’t value it highly enough.

The ignominious award comes a year after the firm’s Homecare division won the 2021 Wooden Spoon after a deluge of complaints about its boiler servicing cover.

A year ago, Mr O’Shea accepted the award over a Zoom call while working from home.

Mr O’Shea — who has a reported annual salary of £875,000 before bonuses, benefits and shares —says: ‘There is no doubt the energy crisis has created a difficult environment for our customers over the last two years.

‘Daily Mail readers, like all our customers, are important to us and we’ll continually look at improving what we do and how we do it.

‘I also know we make a real difference in people’s lives and we get far more right than we get wrong.’

Many customers said they voted for British Gas because it is so hard to get through to on the phone. In some cases, wait times were well over an hour.

You said it can also be difficult getting straight answers from British Gas staff members when you want to query a bill or get help.

Geoffrey Matthews, from Glamorgan, tried numerous times to query a bill by phone without success. ‘I managed to speak to one person having waited almost an hour. After a few minutes I was cut off.’ In the end, he had to go online and use a chatbot service. 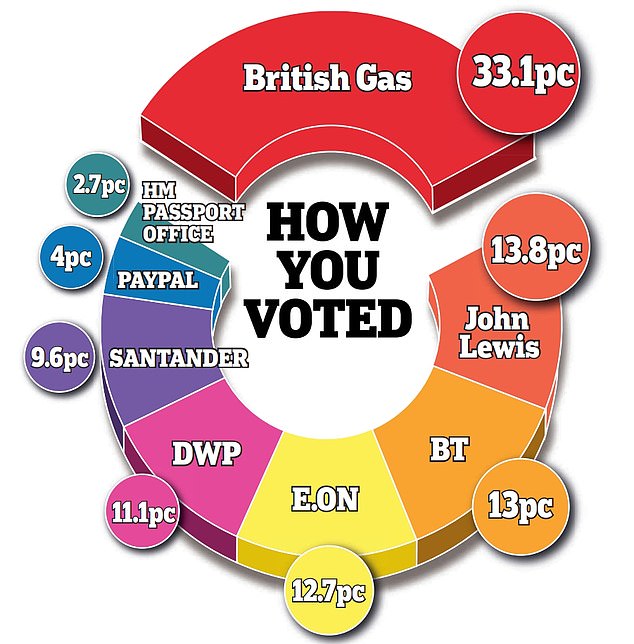 Contenders: Hundreds of readers voted, selecting from a list of eight nominees announced at the beginning of December

‘Our call volumes have increased by more than 50 per cent this winter and we’ve created 700 more UK jobs to manage this. Our hardworking colleagues have handled 16 million contacts from customers in 2022.

‘Each of these rightly needs more time as our customers are looking for more help and advice than ever and we want to support them through this cost-of-living crisis.’

Another major gripe was billing accuracy. Margaret Wilson spent hours on the phone to British Gas after getting an inaccurate bill.

The 82-year-old, from Rotherham, South Yorkshire, saw her monthly bill nearly double, despite being in credit. She was able to get her bill reduced only after almost a month of calls.

We don’t always get things right but, as a trusted brand, our customers value that we are a sustainable and reliable company. When we get things wrong, we do everything we can to fix it.

‘That’s why 200,000 customers have joined us in the last 12 months and why last year we were able to step in and rescue hundreds of thousands of customers from nine energy suppliers who collapsed.’ 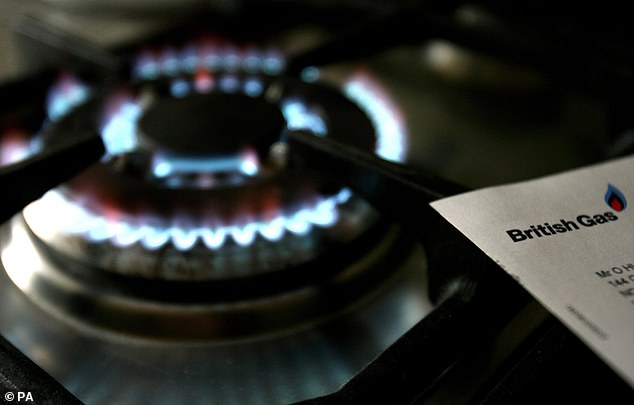 Since the Energy Bills Support Scheme launched in October, Money Mail has had a steady flow of complaints about delayed vouchers from British Gas — or households not receiving them at all.

These are the vital government handouts of £66 or £67 a month to help homes survive the price hikes this winter.

Eleanor Dolan, from Dartford, Kent, says that despite numerous calls, by mid-December she still hadn’t received vouchers for October, November and December. ‘I’m at my wits’ end,’ she says. So far we have helped 43 readers get a total of £3,796 after handing British Gas a dossier of cases.

Mr O’Shea says: ‘Last year, in just a matter of weeks, we had to build a process to hand out over £2.3 billion of Government money to almost six million energy consumers over six months.

‘This was a challenging operation, but we have successfully delivered well over 20 million of these payments and our prepayment meter vouchers have seen one of the highest redemption rates in the sector.’ Runner up: John Lewis took second place with 13.8% of the vote. Readers were appalled at how it had made all its credit card customers reapply after it switched providers

Readers were appalled at how the retail giant made all its credit card customers reapply after it switched credit providers from HSBC to NewDay.

Others say standards have slipped at its department stores.

A John Lewis spokesman says: ‘Last year, we changed our credit card provider — a complex, one-off move that is now complete. We’re sorry we haven’t got it right every time. We’re working hard to offer the best possible customer experience in 2023 and beyond.’