EXPRESS INFORMER > Science & Technology > Ancient otter fossils show it was the size of a LION when it lived more than 2.5 million years ago

Ancient otter fossils show it was the size of a LION: Giant femur and teeth reveal the creature weighed 440 pounds when it roamed Ethiopia more than 2.5 million years ago

Remains of an ancient otter found in Ethiopia reveal the long-extinct creature was the size of a modern lion when it lived more than 2.5 million years ago.

Researchers uncovered teeth measuring more than an inch and a giant 12-foot-long femur that helped them determine the new species weighed 440 pounds -today’s otters weighs up to 13 pounds.

The existence of giant otters is known, but the team led by France’s Camille Grohé of the University of Poitiers believes the latest discovery is the largest otter that has ever roamed the Earth.

Because of its massive size, the new species is said to have feasted on aquatic and terrestrial prey and co-existed with early hominins in the same region.

The team, however, speculates the giant otter met its demise when the wet climate became drier, along with an invasion of hominins into their natural habitats.

Researchers uncovered teeth and giant femurs, which they used to determine the new species weighed 440-pound otter – much larger than today’s animals that only weigh up to 13 pounds

Study coauthor Kevin Uno, a geochemist at the Columbia Climate School’s Lamont-Doherty Earth Observatory, said in a statement: ‘The peculiar thing, in addition to its massive size, is that [isotopes] in its teeth suggest it was not aquatic, like all modern otters.

‘We found it had a diet of terrestrial animals, also differing from modern otters.’

Fossils of the ancient otter were discovered in the Lower Omo Valley of southwestern Ethiopia, which researchers used to estimate the now extinct otter’s size.

Several giant otters are known to have populated Eurasia and Africa from about 6 million to 2 million years ago, with genus Enhydriodon being the most well-known. 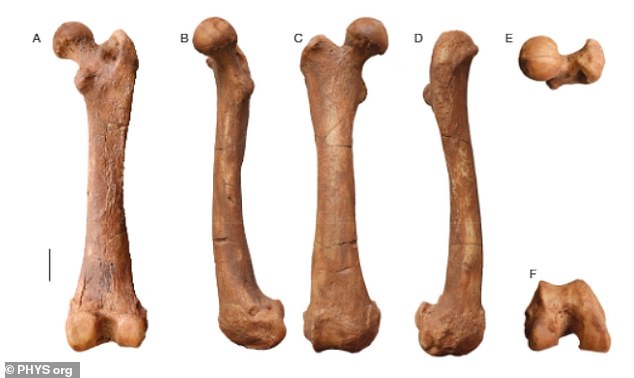 The massive femur helped the team estimate what the otter’s body size was. They also say is the largest otter that ever walked the Earth

This is because its remains, although fragmentary, have been found in many locales, particularly in eastern Africa.

The newly described species, however, is named Enhydriodon omoensis after southwestern Ethiopia’s Lower Omo Valley, where it was uncovered.

‘The Lower Omo Valley of southwestern Ethiopia is located north of Lake Turkana. It represents the northern part of the large Turkana Depression and it exposes Plio-Pleistocene fluvio-lacustrine sediments on the western side of the Omo River, mainly deposited as the Usno and Shungura formations,’ the team shared in the study published in Comptes Rendus Palevol.

‘The Shungura Formation is exceptional in Africa because it preserves a highly continuous, well-dated, and rich paleontological and archaeological record from about 3.6 Ma [million] to 1.05 Ma [million].’ 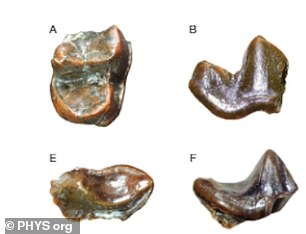 Its large teether allowed it to feast on terrestrial animals, while those today eat shell fish

In 2017, a separate team uncovered remains of another giant otter – this one was the size of a wolf when it lived six million years ago.

Known as Siamogale melilutra, it weighed about 110 pounds and had an unusually powerful bite, which would have allowed it to crush mollusk shells or the bones of birds and small mammals.

Researchers from the University of Buffalo studied the prehistoric otter’s fossilized skull.

The massive otter may have been a dominant predator where it lived in Shuitangba, southern China.

Scans revealed a combination of otter-like and badger-like cranial and dental feature.

Because of this, the species was given the name ‘melilutra,’ derived from the Latin meles, for badger and lutra, for otter.