Amy Coney Barrett embraced her classification as a ‘female Scalia’ on Tuesday as questioning of the Supreme Court nominee commenced on Day 2 of her confirmation hearing – but made sure to distinguish herself from the last Justice.

‘Justice [Antonin] Scalia was obviously a mentor,’ Barrett began of the Supreme Court Justice she clerked for, adding her previous claim that ‘his philosophy is mine too.’

‘He was a very eloquent defender of originalism, and that was also true of textualism’ she said.

‘But I want to be careful to say that if I’m confirmed, you would not be getting Justice Scalia. You would be getting Justice Barrett,’ she distinguished. ‘And that’s so because originalists don’t always agree and neither do textualists.’

Barrett arrived with her family in tow for the second day of her confirmation hearing Tuesday morning as she prepares to field questions from all 22 members of the Senate Judiciary Committee – each receiving 30 minutes.

Like Monday, pro-abortion and anti-Trump protesters and healthcare activists immediately gathered outside on Capitol Hill to express their opposition to Barrett’s nomination. 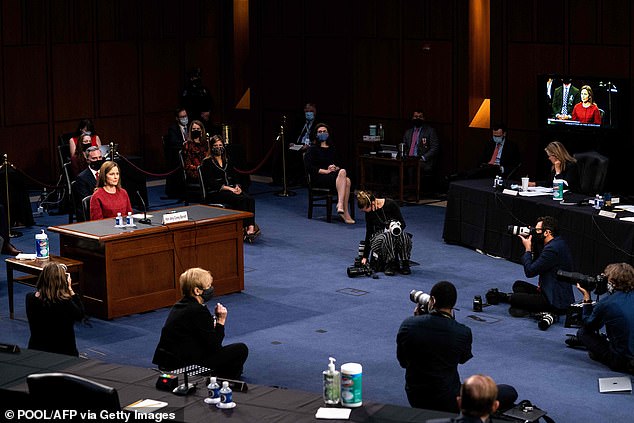 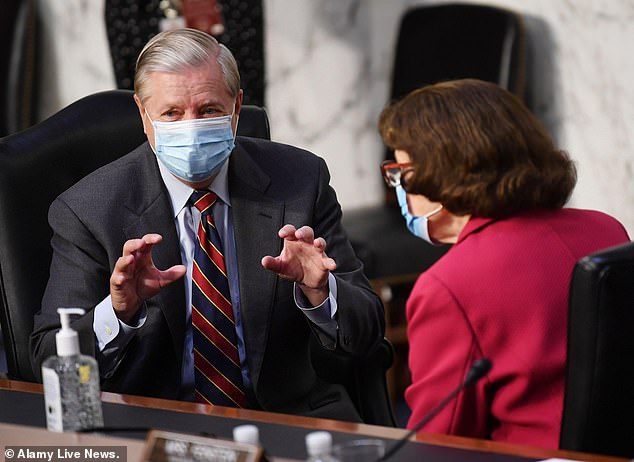 Each of the 22 senators on the Senate Judiciary Committee has 30 minutes to interact and ask questions of Barrett on Tuesday. Pictured are Chairman Lindsey Graham (left) and Democratic Ranking Member Dianne Feinstein (right) speaking with masks on ahead of the second day of the hearing 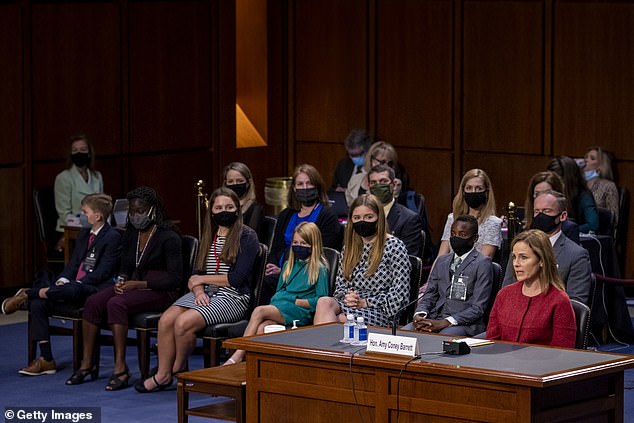 Seated behind Barrett for the hearing were six of her seven children, her husband Jesse, and her six siblings 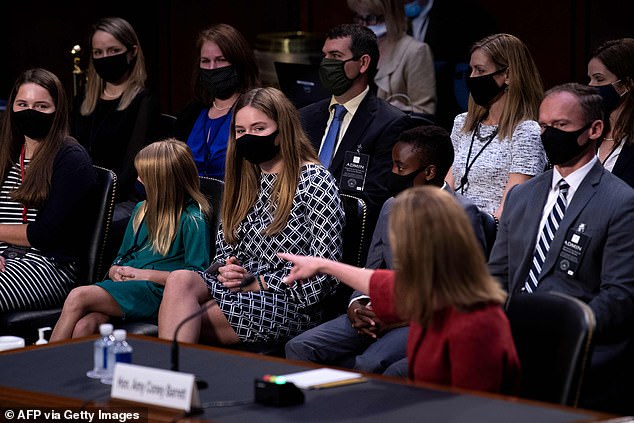 Barrett introduced her husband, children and siblings by pointing to each after Feinstein requested to share who they are with the room 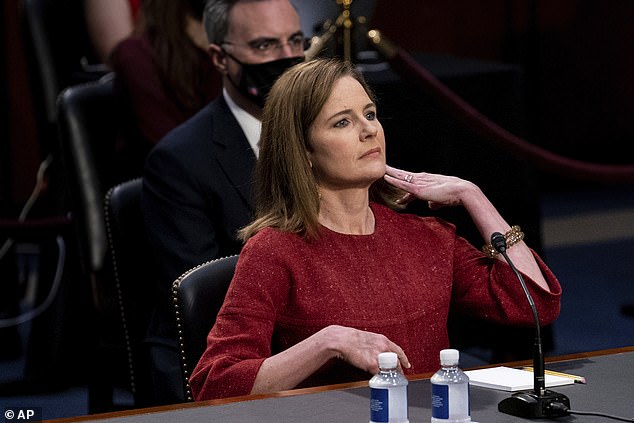 Barrett would not say if she believed the court could overturn Roe v. Wade in the future 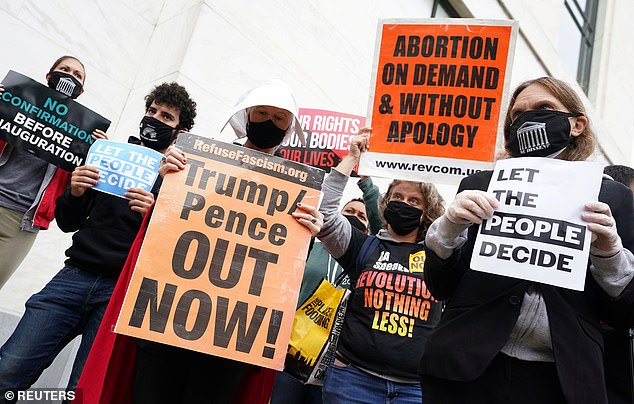 Like the first day of the hearing Monday, demonstrators immediately gathered outside on Capitol Hill to protest Barrett’s nomination

The demonstrators were met by pro-life and pro-Trump protesters holding signs with images of Barrett reading ‘Hope’.

‘I interpret the Constitution as a law,’ she detailed. ‘I understand it to have the meaning that it had at the time people ratified it. That meaning doesn’t change over time and it’s not up to me to update it or infuse my own policy view into it.’

Graham, a Republican Senator from South Carolina, kicked off the day by telling Barrett she could relax and remove her white face cover and then launched a monologue claiming he wanted to distinguish between politics and judgeships.

He railed against the Affordable Care Act, which Democrats spent the majority of their time during Monday’s opening remarks claiming was at risk if Barrett were confirmed.

Oral arguments regarding the ACA will begin in November – after the election but two months before inauguration.

Six of Barrett’s seven children and her husband sat in a row over her right shoulder and White House Counsel Pat Cipollone sat behind her to the left.

Barrett’s youngest child, who has Down Syndrome, remained at home for the hearings – but she assured he was watching her on TV.

The row behind her children and husband were seated all six of Barrett’s siblings. 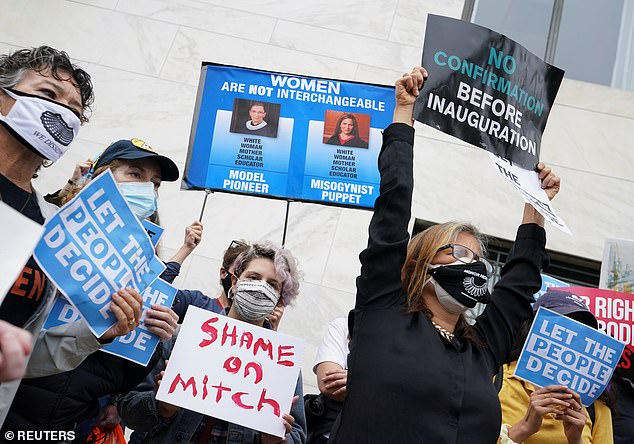 Protesters exhibited the differences between Barrett and the late liberal Justice she would be replacing, Ruth Bader Ginsburg 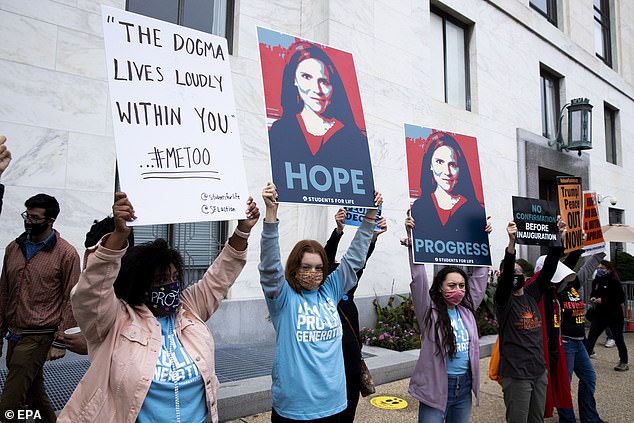 On Monday, all members of the committee, along with Barrett, made their opening statements.

Democrats argued against Barrett’s nomination, claiming it’s a political move made just weeks before the 2020 election by President Donald Trump to strike down the Affordable Care Act at the Supreme Court level.

They also claim her religion could get in the way of her being a ‘fair’ Justice, and say her devout Catholic beliefs would lead to the dismantling of abortion rights with a 6-3 conservative Supreme Court likely to overturn Roe v. Wade.

Republicans, on the other hand, said Democrats are playing politics and making a judgeship into a campaign issue. The GOP is also accusing the opposition party of creating a religious test for Barrett, which they lament is against the Constitution.