Amy Adams made a show-stopping arrival at the long-awaited premiere of Disney’s Disenchanted in Los Angeles earlier Wednesday evening.

The actress, 48, flaunted her fit physique in a corseted gown as she made a grand appearance on the red carpet at the special screening along with other stars.

Disenchanted is the anticipated sequel to the Oscar-nominated film, Enchanted (2007), and will officially be available for streaming on Disney+ on November 18.

The American Hustle star opted for elegance in a figure-hugging, dark purple gown that contained a plunging V-cut.

The stunning, long-sleeved dress contained a small train that flowed behind the talented actress as she strolled along the red carpet.

Amy’s hair was parted to the side, and effortlessly flowed past her shoulders in light, wavy curls.

The beauty appeared to be in high spirits and flashed a few smiles as she paused for photos at the premiere held at the El Capitan Theater. 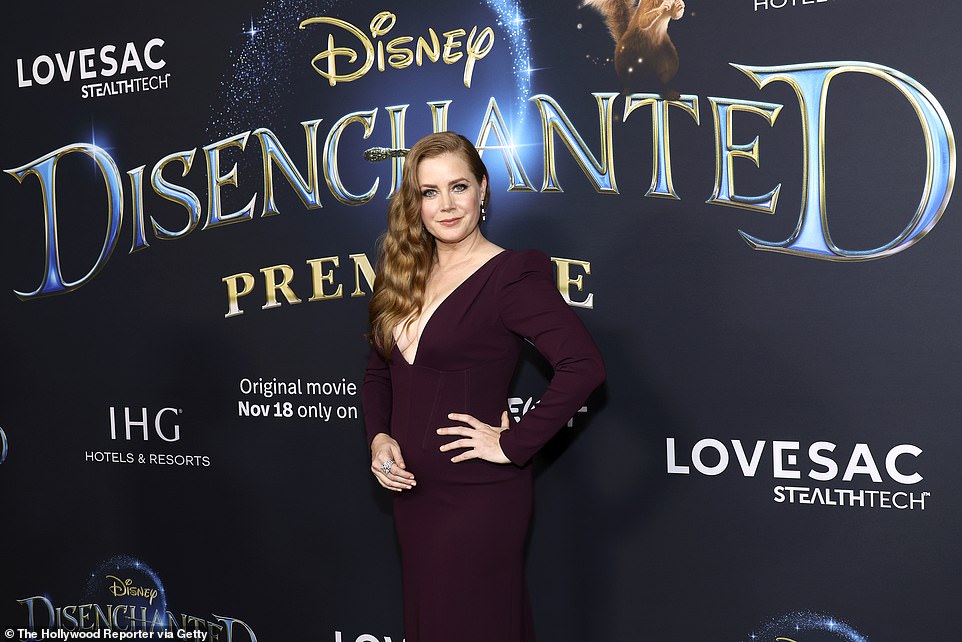 Reprising her role: The talented star had the chance to step back into the shoes of the character, Giselle, in the anticipated sequel 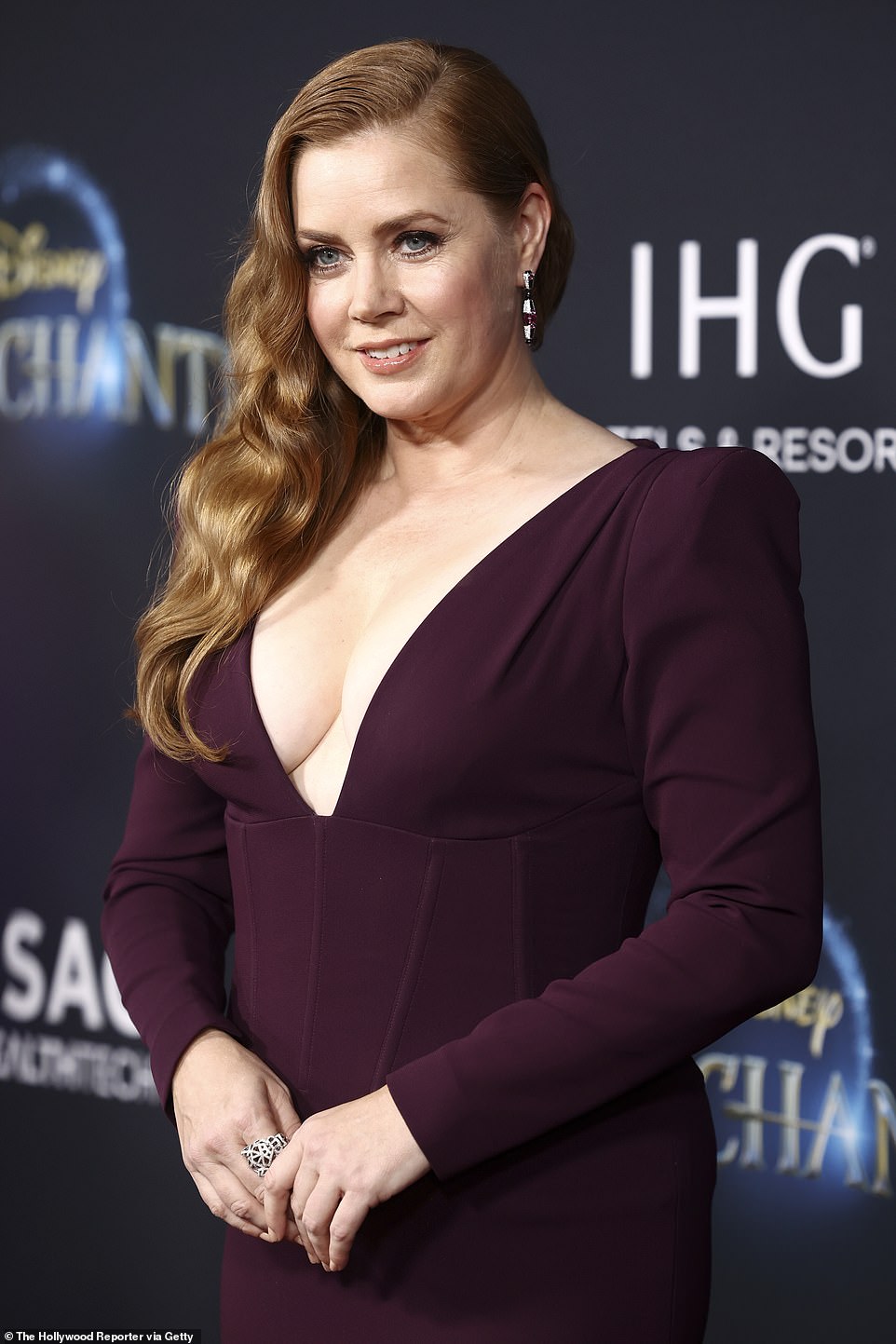 To accessorize her glammed up look for the evening, Amy added a pair of silver rhinestone earrings along with a large, glitzy ring on her right hand.

Her makeup was classically done, comprising of a layer of black mascara and eyeliner along with a darker eyeshadow.

For a finishing touch, Amy chose to add a nude-colored lipstick to keep the dress the main focal point.

The actress reprised her role of Giselle in the sequel, Disenchanted, and was joined by the original cast from the first successful movie.

A pop of color: Idina Menzel turned heads when she stepped onto the red carpet in a colorful ensemble

The premise of Disenchanted follows Giselle as she makes a wish which results to her, ‘inadvertently turning the lives of those in the real world and Andalasia upside down in the process,’ according to IMDB.

When talking about stepping back into the shoes of her character, Giselle, Amy told Entertainment Weekly, ‘When we meet her in this movie, she hasn’t lost her magic.’

‘But she’s definitely lived in this world now for a period of time. But she still is Giselle, and magic, it’s still there,’ the actress added.

Other stars that were in attendance to celebrate the film’s premiere included Frozen star, Idina Menzel.

She put on an eye-catching, colorful display in a hot pink skirt with ruffled details on the front and bottom hem. 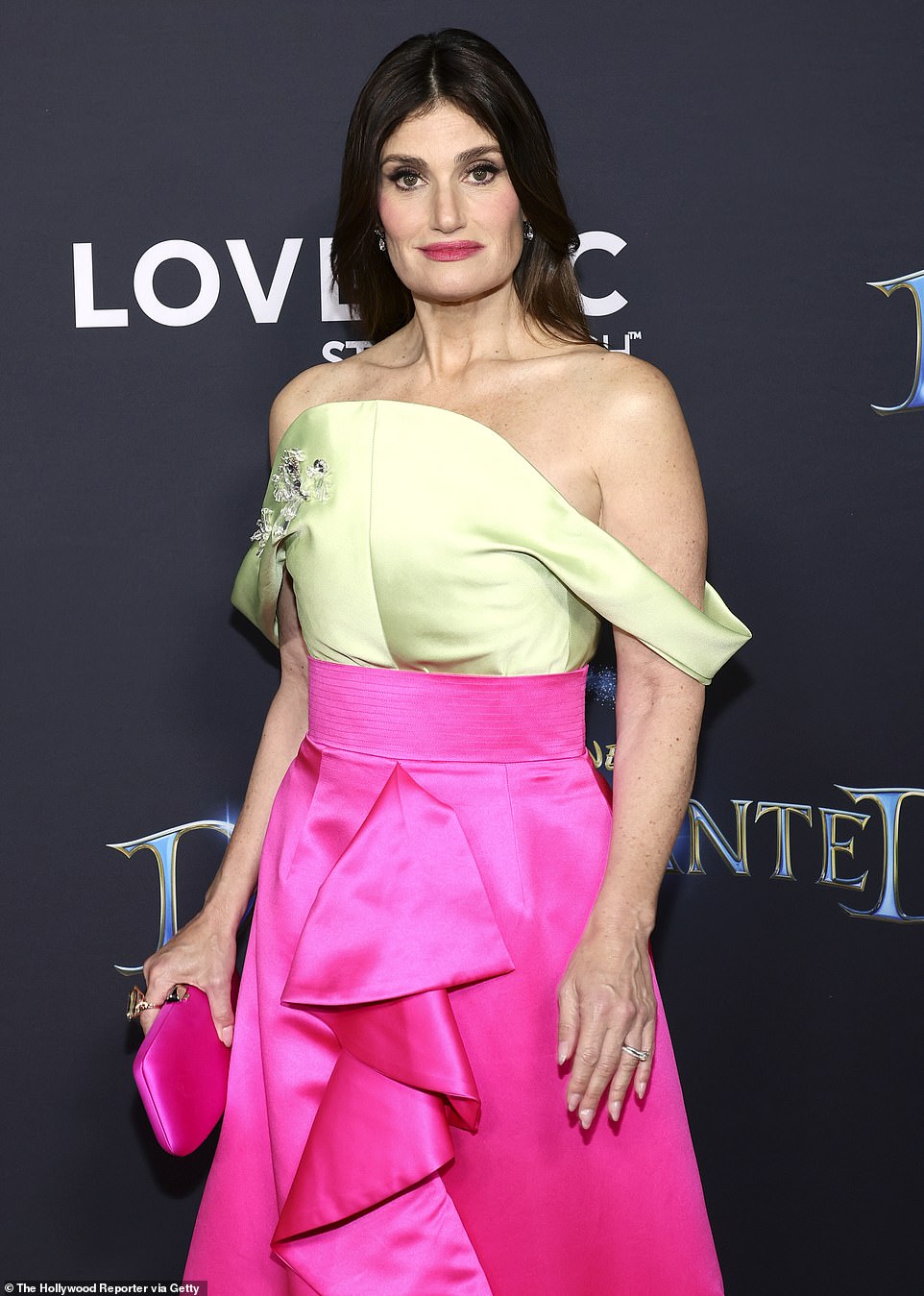 Radiant: The talented singer appeared to be in high spirits and put on a radiant display as she celebrated the premiere of the upcoming Disney film 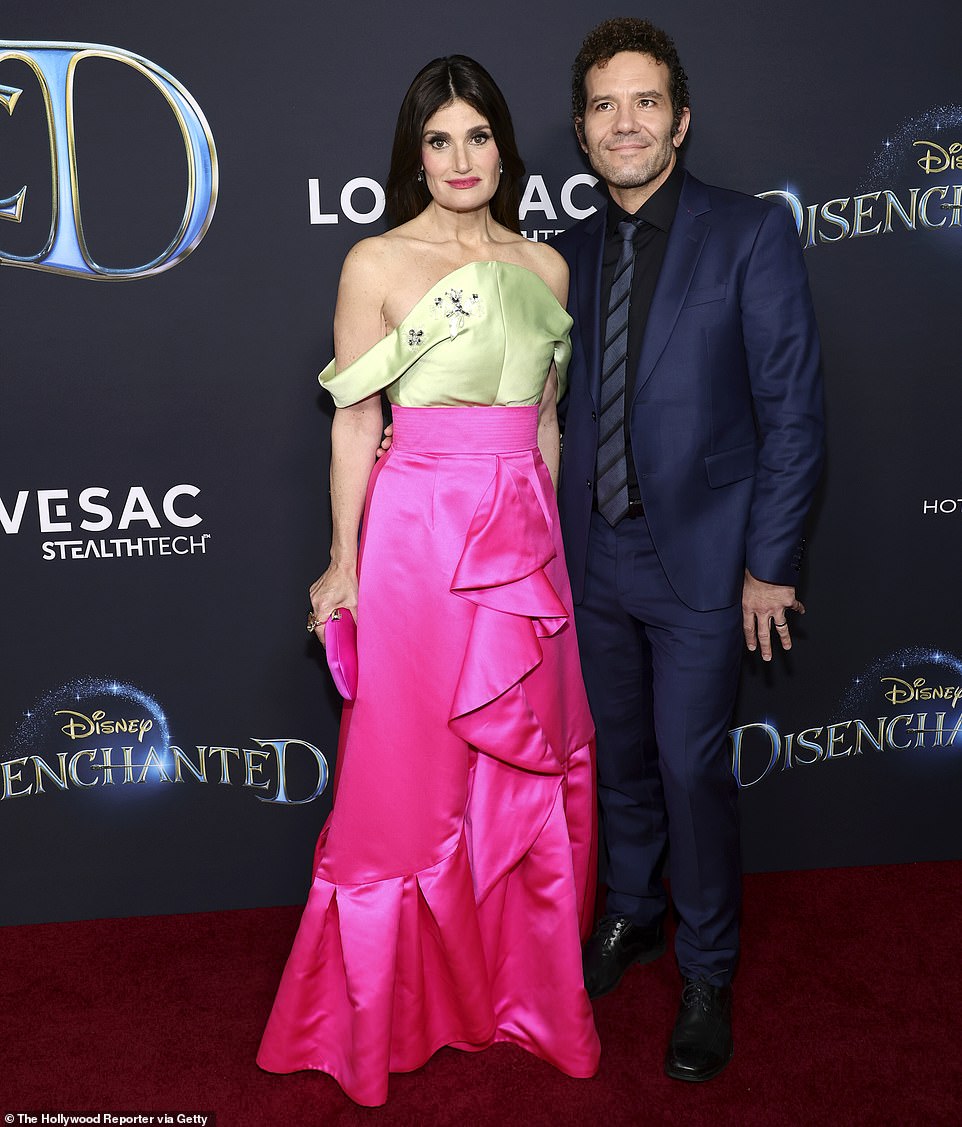 Happy couple: Idina posed for a quick snap with her husband and actor, Aaron Lohr, on the star-studded red carpet

Idina paired the vibrant bottom piece with a light green, strapless satin shirt that was tucked into the waist of the skirt.

A sparkling rhinestone detail was embroidered on the right side of the top. She carried a hot pink clutch bag in her hand to complete her look for the night.

Her brunette hair was parted in the middle and fell down straight behind her shoulders. She donned a pair of small, glittering earrings to accessorize her look.

Patrick Dempsey, who plays Amy’s on-screen husband, Robert, was also in attendance at the premiere.

He looked dapper in a dark navy, striped suit and added a light blue shirt underneath. The Grey’s Anatomy alum slipped into a pair of sleek, black dress shoes for a finishing touch. 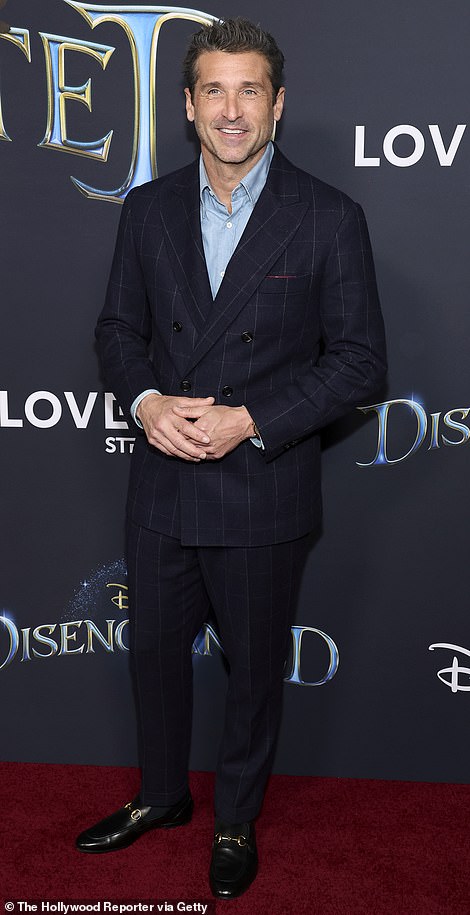 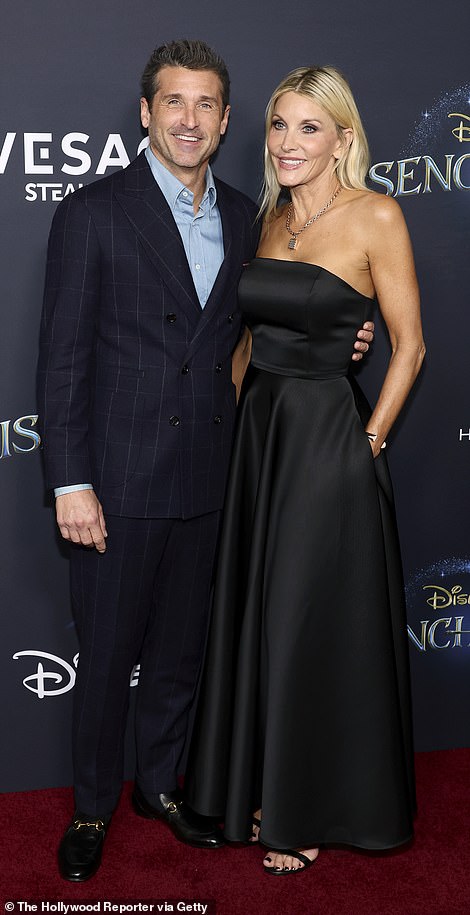 Dapper: Patrick Dempsey, who plays Amy’s on-screen husband, Robert, in the film, also made a cheerful appearance at the screening 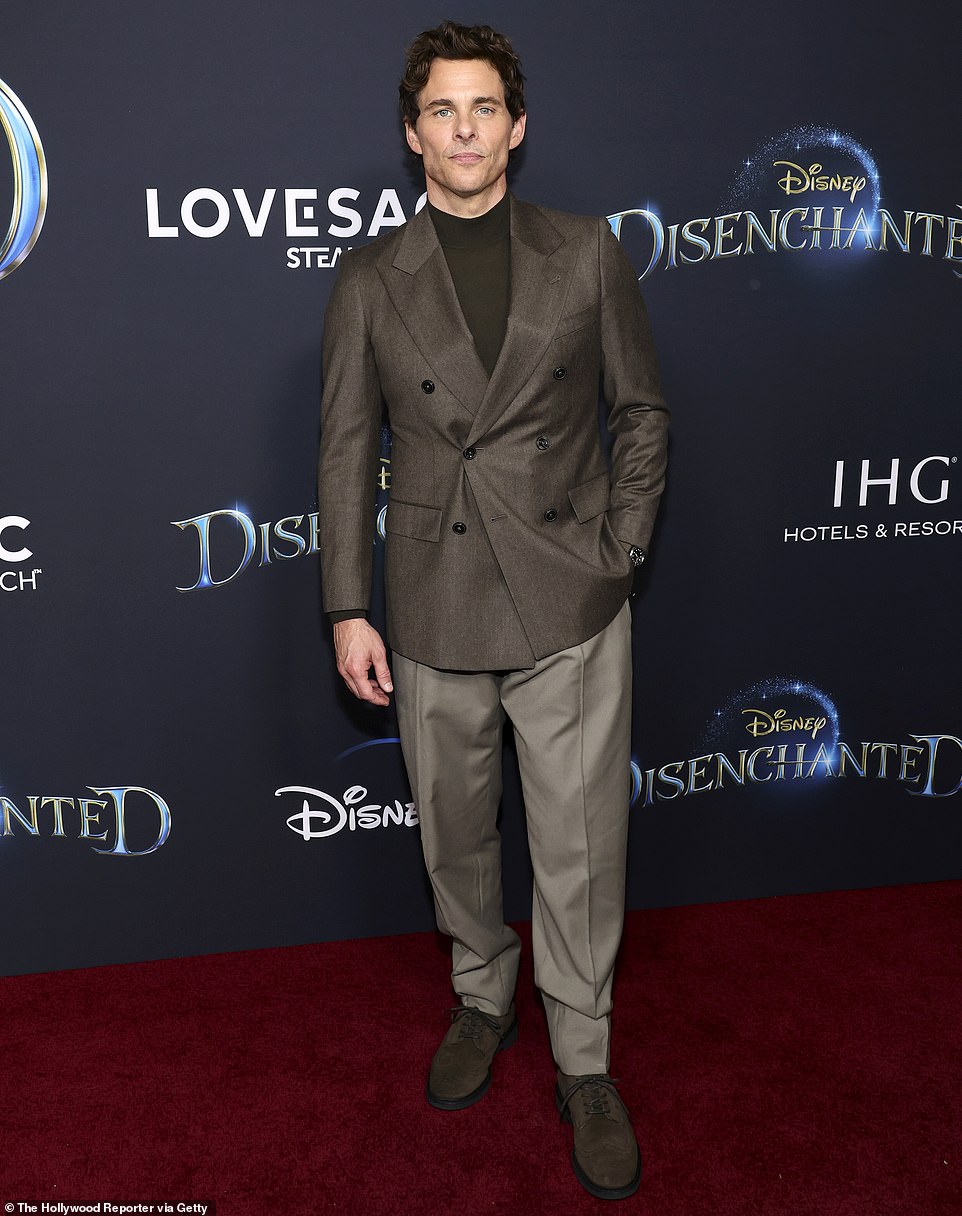 Patrick was pictured with his wife, Jillian Fink, who donned a strapless, black dress that flowed down towards the ground.

The two lovebirds officially tied the knot in 1999, and share three children together, Talula, Darby, and Sullivan.

James Marsden also dressed to impress at the screening, and opted for a brown suit jacket and dark sand-colored slacks.

Instead of a classic dress shirt, The Notebook alum added a dark turtleneck underneath.

He completed his ensemble with a pair of brown-colored shoes that were secured with laces. James is known for portraying one of the lead characters in the films, Prince Edward from Andalasia. 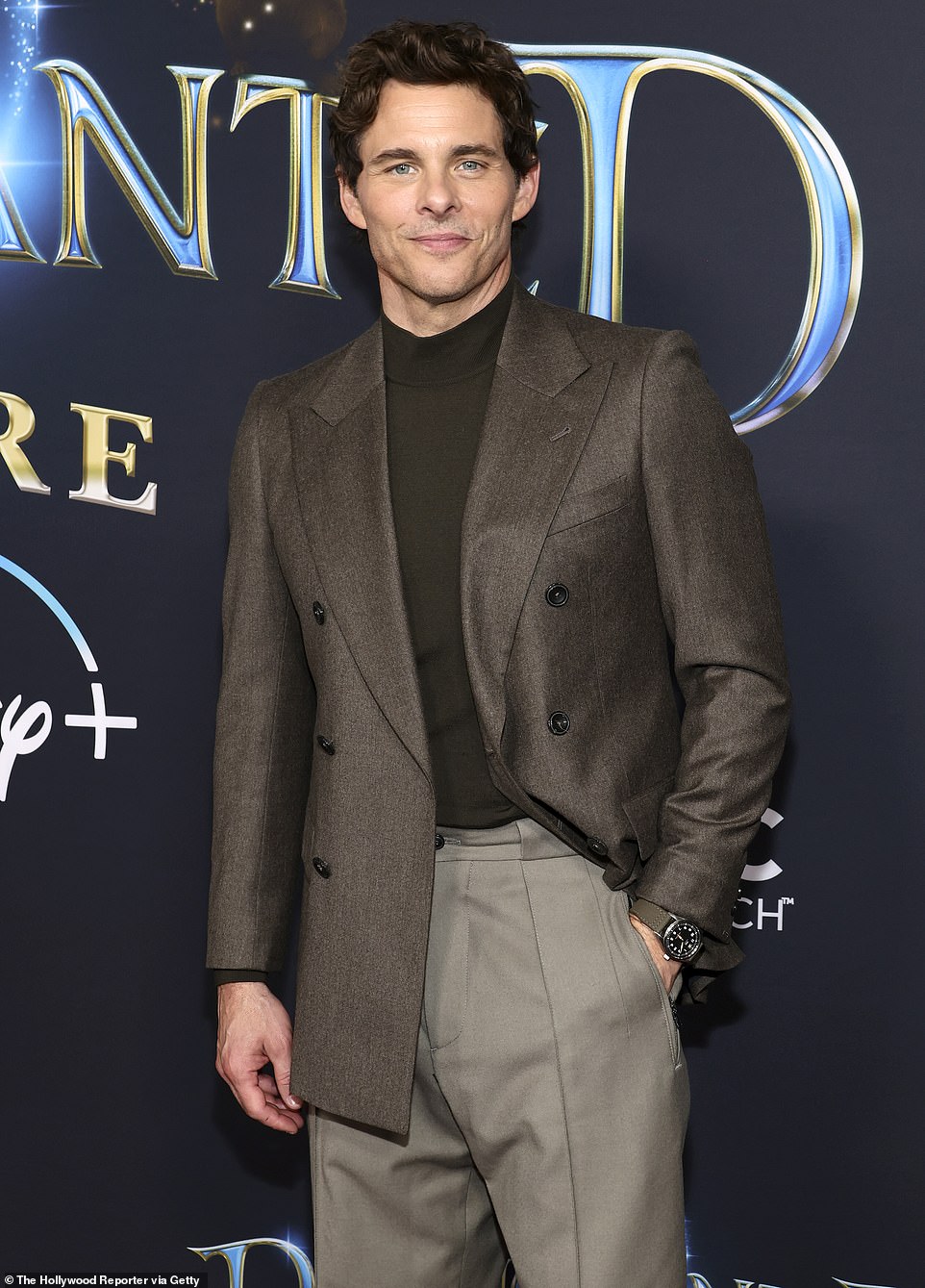 Classic: The Notebook actor donned a classic brown suit jacket and sand-colored slacks to complete his look for the premiere 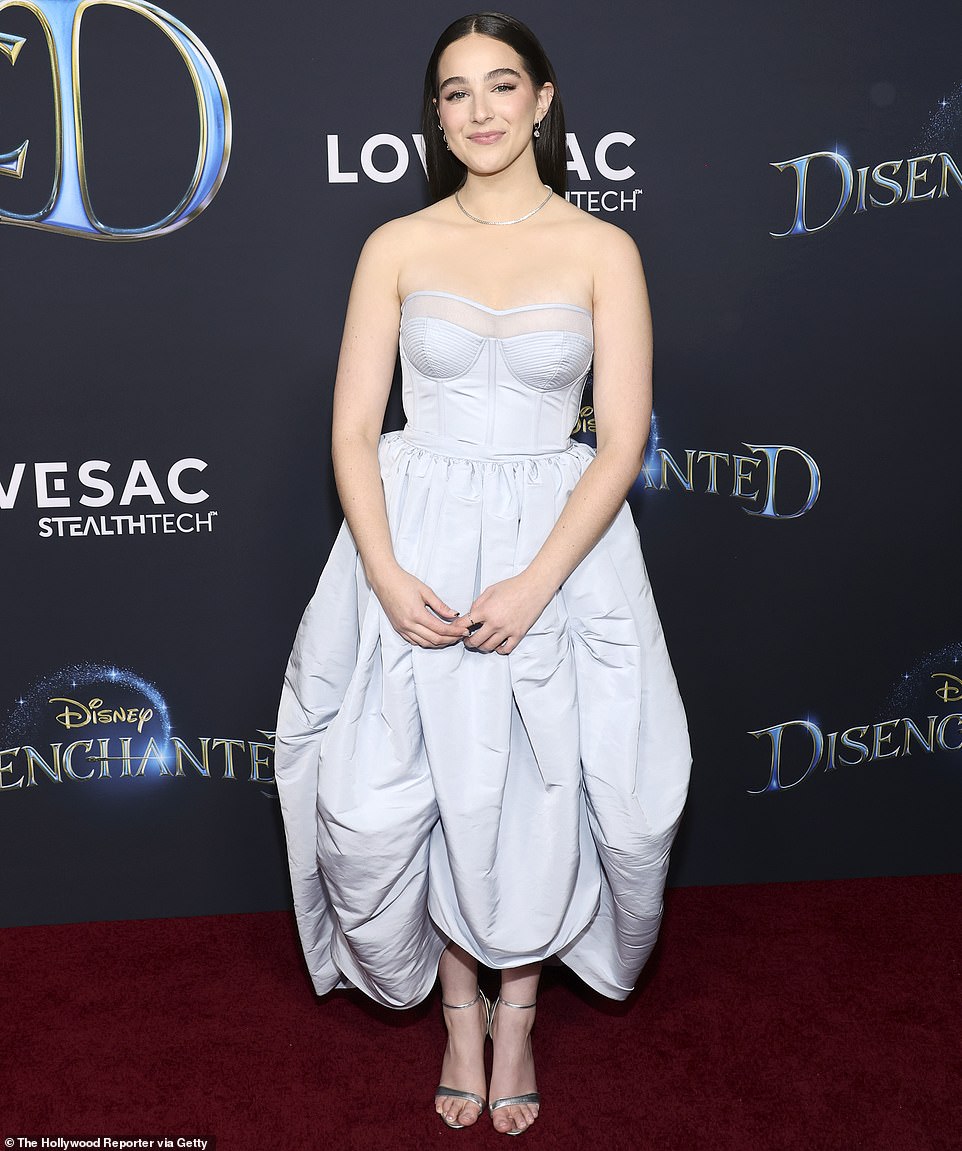 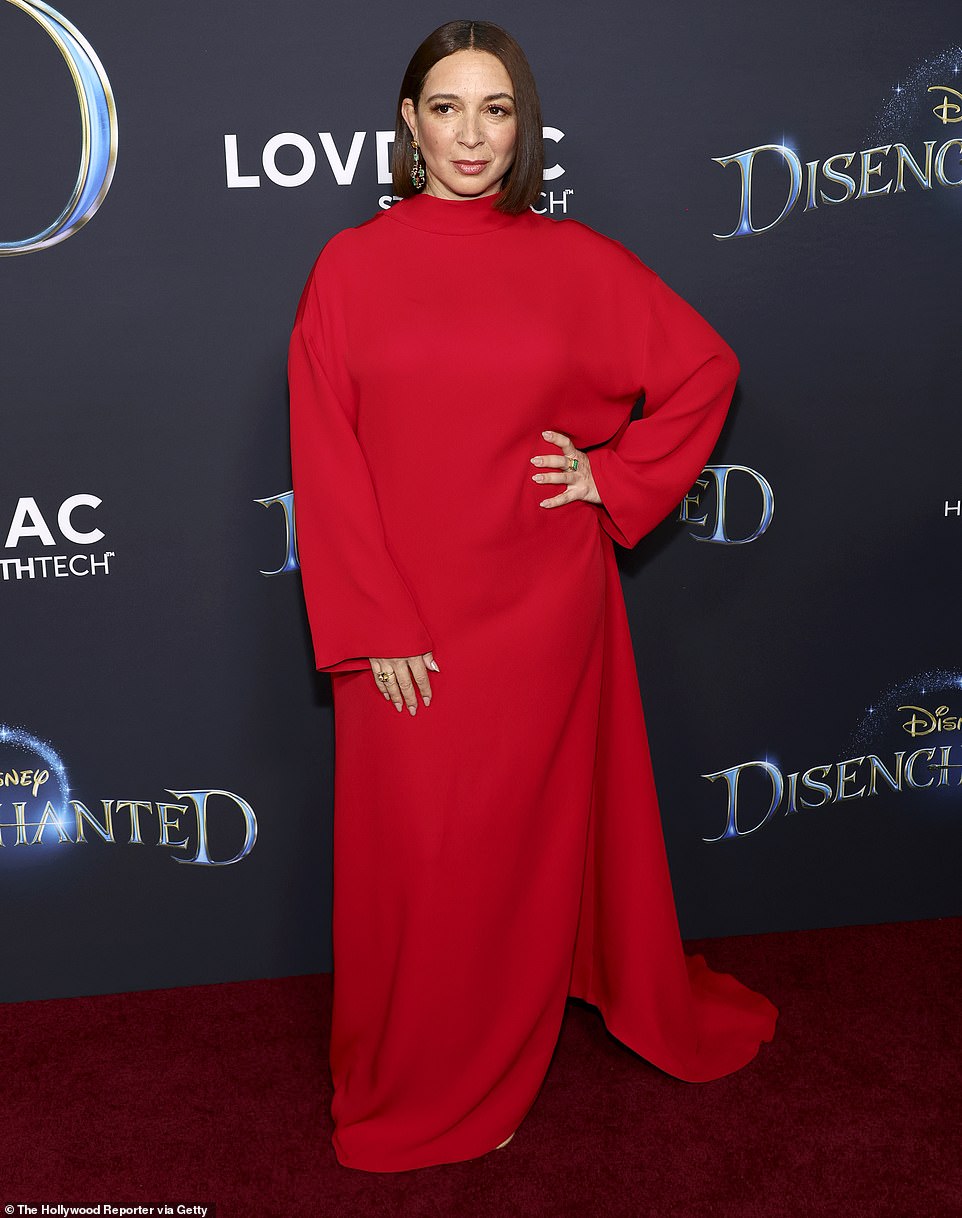 Eye-catching: Maya Rudolph joined the Disenchanted cast and made an arrival in a vibrant red dress

Maya Rudolph joined the cast of Disenchanted and introduces a new character, Malvina, who lives in the suburban town that Giselle and her family moves to in the film.

The actress made a fashion statement in a bright red, caped dress that flowed down behind her.

Gabriella Baldacchino, who plays Morgan in the upcoming Disney sequel, was elegant in a Cinderella-inspired dress with a corset top.

Glee alum, Jayma Mays, also joined the talented and beloved cast and will play the role of Ruby. She was classically chic in a silver, sequin dress with a feather trim on the top V-neck cut and bottom hem.

The actress slipped into a pair of silver heels that were secured with straps at the ankle for a final touch to her glammed up look. 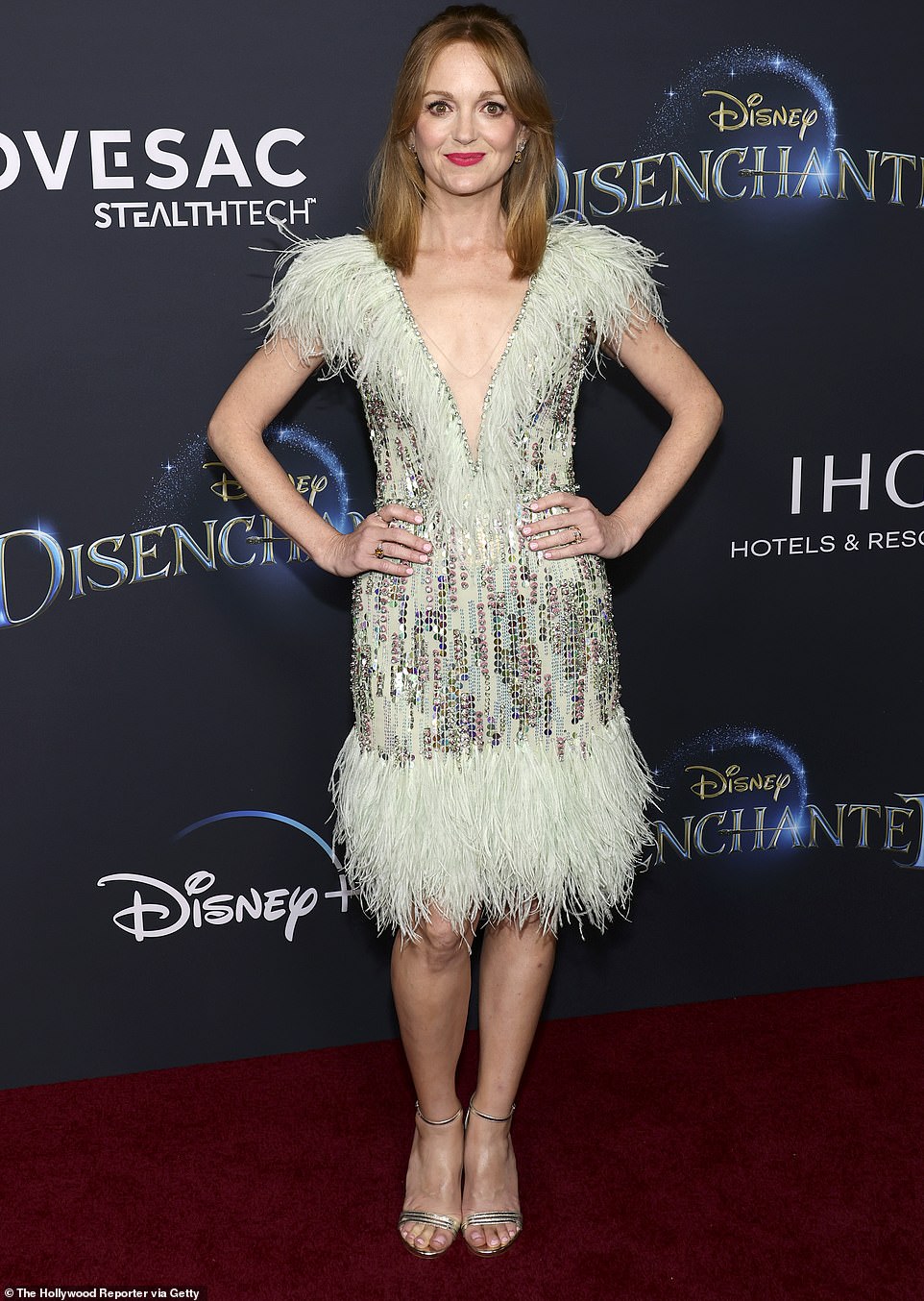 So chic: Glee alum, Jayma Mays, was classically chic in a silver, sequin dress with a feather trim on the top and hem

Vibrant: Mychal-Bella Bowman turned heads in a printed ensemble and vibrant blue jacket with a high collar while Luann Diez donned a fitted white dress with thin straps and a drop-low waist

Yvette Nicole Brown, Stephanie Styles, and makeup artist Patrick Starrr, all opted for stunning pastel ensembles as they stopped by the special event.

Enchanted (2007) raked in $340.5 million in the box office when the movie premiered and additionally garnered two Golden Globe and three Academy Award nominations.

The first look trailer for the magical sequel was shared at the D23 Expo held earlier this year in Anaheim, and audiences have been counting down the days until they can see the beloved characters return to the screen. 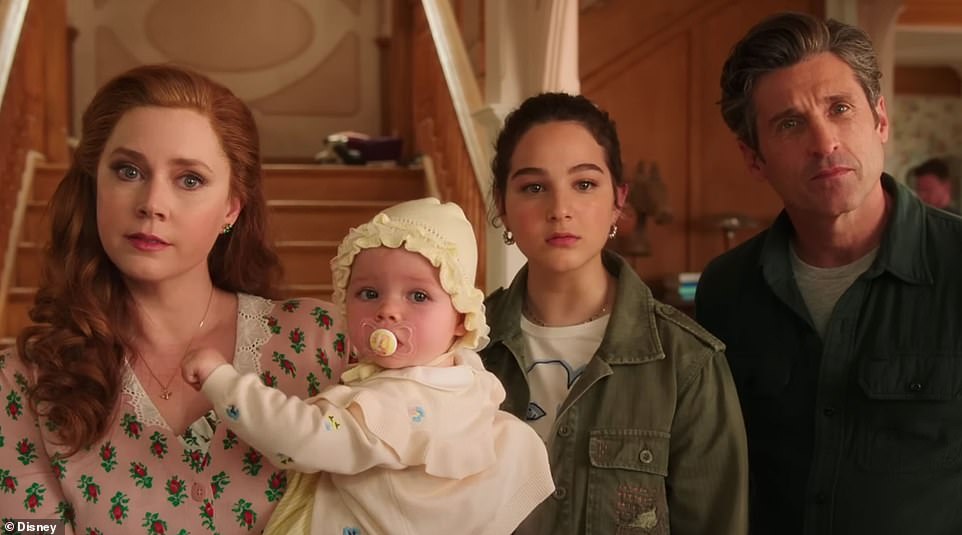 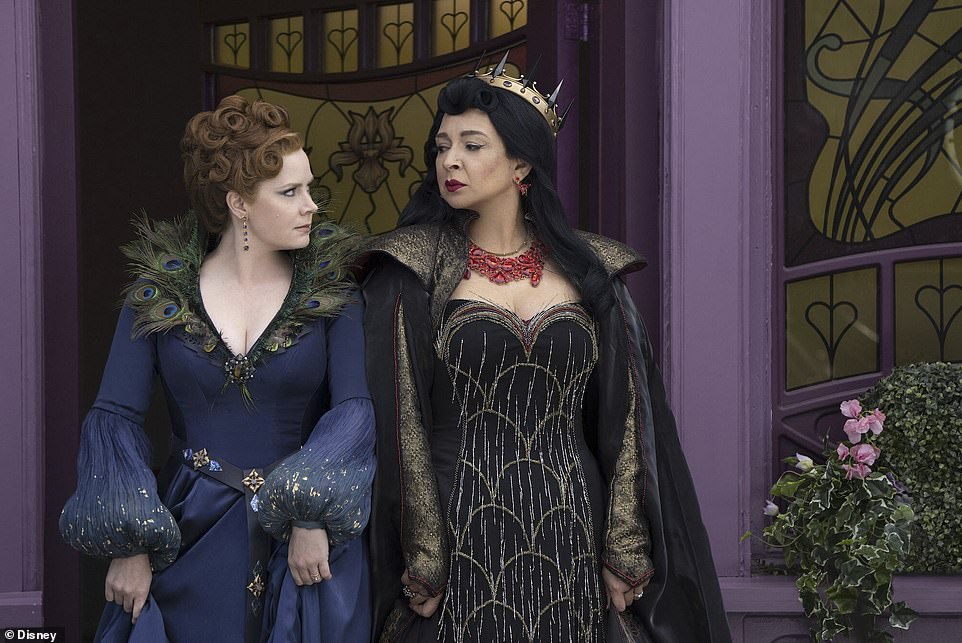 New storyline: The premise of Disenchanted follows Giselle as she makes a wish which results to her, ‘inadvertently turning the lives of those in the real world and Andalasia upside down in the process,’ according to IMDB