Amount of microplastics found on the seafloor has TRIPLED in just 20 years, study finds

The amount of microplastics found at the bottom of oceans has tripled in 20 years, researchers have found.

Tiny pieces of plastic debris – smaller than the human eye can see – have been building up on the sea floor at a depth of more than 100 metres, a study reveals.

Their accumulation mimics the increasing amount of plastic products used by society for things like packaging, bottles and clothing scientists said.

And it shows the world is still ‘far from’ achieving a reduction in single-use plastic, they warned.

The amount of microplastics found at the bottom of oceans has tripled in 20 years, researchers have found (stock image)

Microplastics at the bottom of the ocean remain unaletered

Worryingly, the tiny pieces of plastic had remained unaltered since they were first deposited decades ago.

Once trapped in the seafloor they no longer degrade, either due to a lack of erosion, oxygen or light.

‘Once deposited, degradation is minimal, so plastics from the 1960s remain on the seabed, leaving the signature of human pollution there,’ the scientists said.

The team analysed five sediment cores that were extracted in the Balearic Sea – which lies to the east of Spain and south of France – in November 2019.

Each core was 14.5 inches (37cm) long and allowed the researchers to see how many microplastics were on the sea floor from 1965 – when plastics started to be mass-produced – onwards.

Their results, published in the journal Environmental Science and Technology, revealed that since the turn of the Millennium the amount of particles from broken-down plastic on the seafloor has tripled.

The team of researchers include those from the Universitat Autònoma de Barcelona (ICTA-UAB) in Spain and the Department of the Built Environment of Aalborg University (AAU-BUILD) in Denmark.

They said the amount of microplastics found embedded in the sea floor mimics global plastic production from 1965 to 2016.

Researcher Laura Simon-Sánchez said: ‘Specifically, the results show that, since 2000, the amount of plastic particles deposited on the seafloor has tripled and that, far from decreasing, the accumulation has not stopped growing mimicking the production and global use of these materials.’ 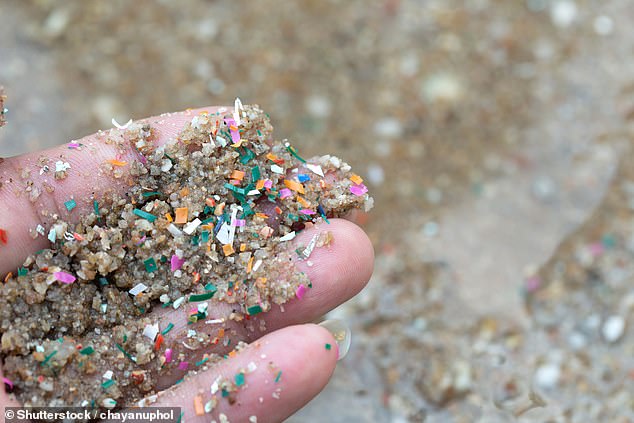 Worryingly, the tiny pieces of plastic had remained unaltered since they were first deposited decades ago

Worryingly, the tiny pieces of plastic had remained unaltered since they were first deposited decades ago.

Once trapped in the seafloor they no longer degrade, either due to a lack of erosion, oxygen or light.

‘Once deposited, degradation is minimal, so plastics from the 1960s remain on the seabed, leaving the signature of human pollution there,’ the scientists said.

Michael Grelaud, who was also part of the research team, added: ‘This has allowed us to see how, since the 1980s, but especially in the past two decades, the accumulation of polyethylene and polypropylene particles from packaging, bottles and food films has increased, as well as polyester from synthetic fibres in clothing fabrics.’

They found polypropylene – mostly used for packaging – was the most abundant.

Combined, the three different types of particles reached a maximum weight of 1.5 milligrams per kg – which was found in the upper part of the sediment core, representing the most recent years.

The environmental impacts of microplastics have yet to be fully understood, although it has been well established that the tiny pieces of plastic have been able to contaminate both food and water supplies.

Previous research has estimated up to 14 million tons of microplastics lie on the seafloor, with plastic pollution reaching the sea ice around Antarctica and even the world’s deepest waters of the Mariana Trench.

Health fears as experts find roast dinner can contain up to 230,000 microplastic particles