New Today programme presenter Amol Rajan revealed this morning that he doesn’t lock doors in public toilets for fear of getting stuck and also refuses to use lifts.

The BBC’s media editor has spoken about a ‘full-on panic attack’ and one hour of sleep he had the night before beginning his first shift on the Radio 4 show at 3.45am.

Mr Rajan, 37, said he was in a ‘dreadful frenzy’ on May 16 worrying about the ‘hours ahead’ and tried to calm down by watching his son sleep and reading Private Eye.

He then downloaded several meditation apps but all of the methods ‘made me feel worse’ – and by 10pm he ‘lost it’, ‘went to a dark place’ and began drinking rum.

He also revealed: ‘If I ever use a toilet in public I don’t lock the door because I am so worried about getting stuck. And I avoid lifts to the extent possible. My mother-in-law used to live in Singapore on the 16th floor and I would walk all 16 flights.’ 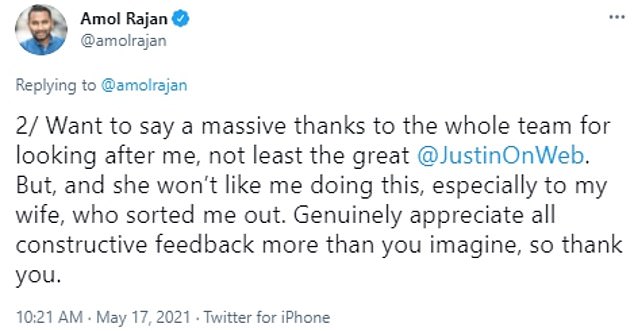 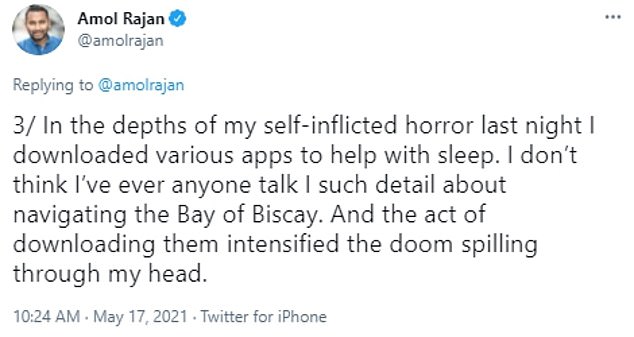 Speaking this morning about his first Today shift to Johnny Ward, the so-called ‘Anxious Fireman’, as well as psychologist Dr Linda Dubrow-Marshall, Mr Rajan said: ‘I had worked myself up into a dreadful frenzy, catastrophising about the hours ahead.

‘I tried very hard to calm down. First watching my son sleep, then reading Private Eye, then downloading several meditation apps. Each of these things made me feel worse, so that by 10pm, I lost it.

Amol Rajan was born in Calcutta, India, in 1983 but moved to London with his family when he was aged just three, and lived in Chiswick and Hendon before they settled in Tooting.

He worked at the Foreign and Commonwealth Office on his gap year before studying English at the University of Cambridge and editing the student newspaper Varsity. 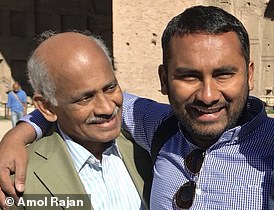 His professional media career began as a researcher on Channel 5’s The Wright Stuff, before he joined The Independent newspaper.

There, he rose up the ranks to become the youngest editor of a broadsheet in British history, aged 29 – as well as the first non-white editor.

The cricket enthusiast then moved onto the BBC in 2016, where he has held positions including media editor, Radio 2 host and now a presenter on Radio 4’s Today programme.

The father-of-two, who is married to academic Charlotte Faircloth, also writes for magazines including The Spectator, GQ and New Statesman.

‘I went to a dark place. I had three very big rums and a bit else besides. My remarkable wife sorted me out and eventually after my 18-month-old daughter had woken up a few times, the total terror had subsided and I got some shut-eye, before adrenaline carried me through the show.’

Mr Rajan is understood to be presenting about 50 shifts a year on the programme, working alongside the four existing presenters – Nick Robinson, Mishal Husain, Justin Webb and Martha Kearney.

It is thought the BBC offered Mr Rajan the role as part of a package to keep the presenter at the corporation after he received a job offer from a rival organisation.

On May 17 after his first show, he tweeted: ‘10pm last night I had a full-on panic attack. Worked myself up into a frenzy, catastrophising about first shift on @BBCr4today.

‘Had 3 massive rums and a bit else. Got 1hr kip, in at 3.45 (below). Survived. Thank you so much for all the niceness and constructive criticism…’ He thanked Mr Webb and ‘the whole team for looking after me’ and his wife ‘who sorted me out’.

Mr Webb responded on Twitter at the time, joking: ‘3 rums. Imagine how good Amol will be when sober.’

Speaking today, Mr Rajan said he did not expect the big response that his tweet received. He added: ‘I’m not someone who suffers from anxiety generally.

‘I have had claustrophobia all my life. I really don’t like being stuck in a lift. I’ve had panic attacks four or five times, they’ve always related to claustrophobia.

‘What happened last week was not related to claustrophobia. I was building up and building up in my head, catastrophising about going on the Today programme.

‘And the weird thing is, It wasn’t the Today programme itself I was worried about. I could do that. It was the prospect of a night without sleep.

Mr Rajan, who revealed he had cognitive behavioural therapy, also asked co-presenter Sarah Montague if she had a panic attack before her first show. 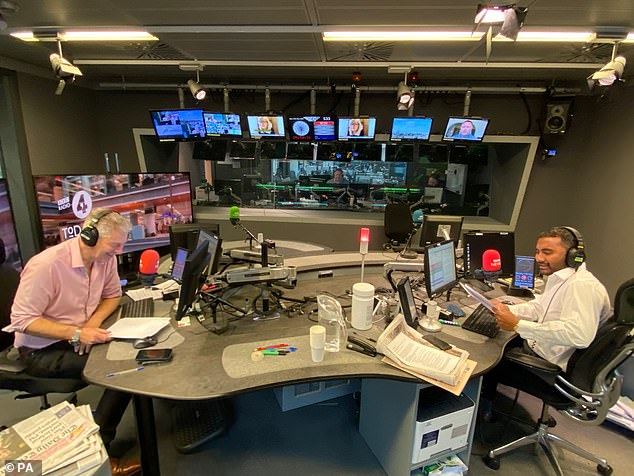 She said: ‘I remember being anxious but I had done the World at One for many years.

A Cabinet Office minister has called on BBC Radio 4 to bring back its classical four-nations theme tune after it was axed in 2006.

Penny Mordaunt wrote to BBC director-general Tim Davie urging him to put the ‘UK Theme’ back on the airwaves, claiming it would help the BBC ‘reconnect with its audience’ and promote ‘regional and local diversity’.

The much-loved five-minute long piece of orchestral music was written by Jewish refugee Fritz Spiegl, who fled Austria to escape the Nazis in 1939.

He composed it as a ‘love song to those that took him in’, the minister said.

It mashes together songs synonymous with England, Wales, Scotland and Ireland including: Danny Boy, What Shall We Do With the Drunken Sailor? and Scotland the Brave. Rule Britannia is repeatedly played throughout.

But BBC bosses replaced the tune – which played every morning at 5.30 before the shipping forecast – with another news bulletin in 2006.

‘But I have had nights where I haven’t slept at all. But once you’ve done it once, the adrenaline comes through.

‘You sounded incredibly relaxed. Annoyingly relaxed. You could barely smell the rum on your breath at all.’

While continuing as the corporation’s media editor, Mr Rajan will also present a new interview series for BBC Two and a two-part royal documentary.

He has described the Today programme as ‘one of the most powerful institutions in British journalism’ and has previously said he was ‘humbled’ and ‘thrilled’ to get the role.

On March 11, Mr Rajan became the first new Today presenter to be appointed since the departure of John Humphrys in September 2019.

The programme had continued since then with four hosts, along with occasional cover presenters including Sarah Smith and Simon Jack.

Mr Rajan began his career as a researcher on Channel 5’s The Wright Stuff, before becoming editor of The Independent newspaper, then joining the BBC in 2016.

Speaking in March, the BBC’s director of news Fran Unsworth said: ‘Amol conducts interviews with sharpness and grace, and I’m delighted we’ll be able to showcase that to the widest possible audience.’

And Mr Rajan said at the time: ‘Today is one of the most powerful institutions in British journalism; and the prevailing winds of our time make its job, and influence, yet more vital.

‘It has a world-class team, both on and off air, under strong and effective new leadership. My aim is just to do them, and our listeners, proud.

‘I’ve no intention of trying to reinvent news, and think the best thing is to keep it simple. Be fair, get to the truth, and don’t screw up.’