The 59-year-old judge at the end of the one-hour season 14 results show on NBC had to choose between Emanne, 10, and blacklight painter Alex Dowis.

Show creator and executive producer Simon said he could justify a place for both of them in the finals.

He praised Alex for his visual tribute to 9/11 emergency responders during Tuesday’s live show and told Emanne who sang an Italian version of (Everything I Do) I Do It for You by Bryan Adams that she had a ‘special’ voice.

‘We have an incredible finale lined up. Emanne, you’re going to be joining that finale,’ Simon told Emanne who was the Golden Buzzer pick of guest judge Jay Leno, 69, during week four of the Judge Cuts.

Emanne and Alex were among the three acts who were voted on by viewers during the live Dunkin’ Save along with comedian Ryan Niemiller. 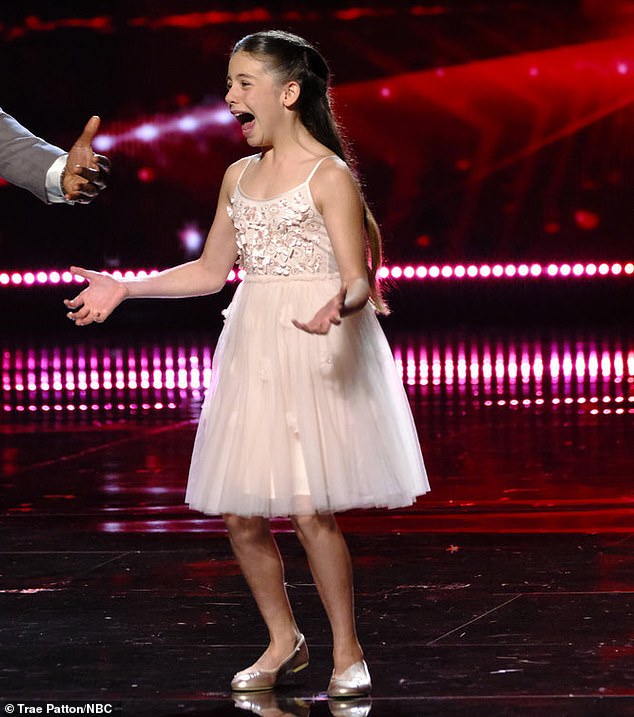 Opera singer: Emanne, 10, reacted as Simon voted her into the finals 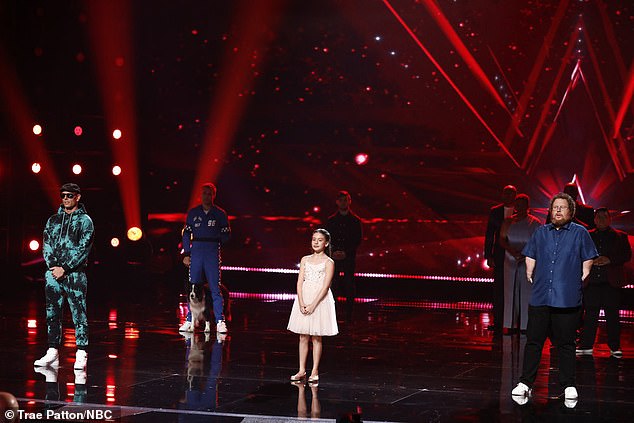 Live results: Alex Dowis, Emanne and Ryan Niemiller were the three acts in the Dunkin’ Save and were voted on by viewers during the one-hour show on NBC

The stand-up comic who cracks jokes about his disability in both arms was saved by viewers forcing the judges to vote between Emanne and Alex.

Gabrielle gushed that Emanne’s vocals were ‘perfection’, but also noted her ‘intangibles’ including her interactions with fellow contestants and the crew.

‘You’re a true pro and a really great girl,’ Gabrielle said as she cast her vote for the girl with a ‘voice of an angel’. 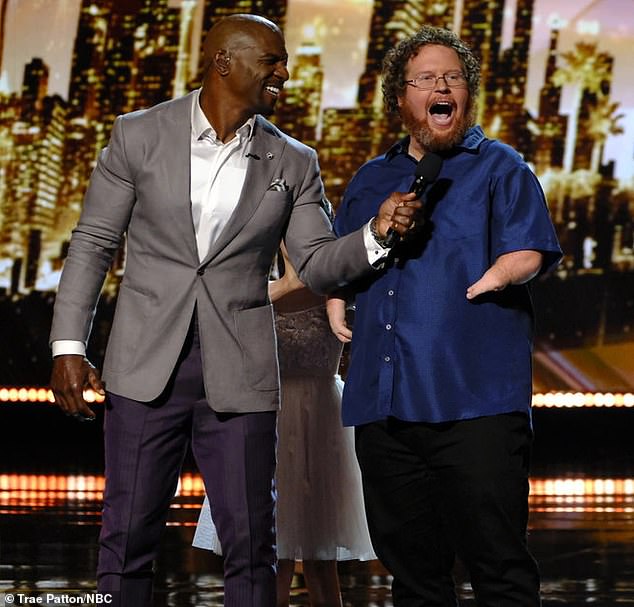 Final round: Ryan yelled in joy after being voted into the finals via the Dunkin’ Save 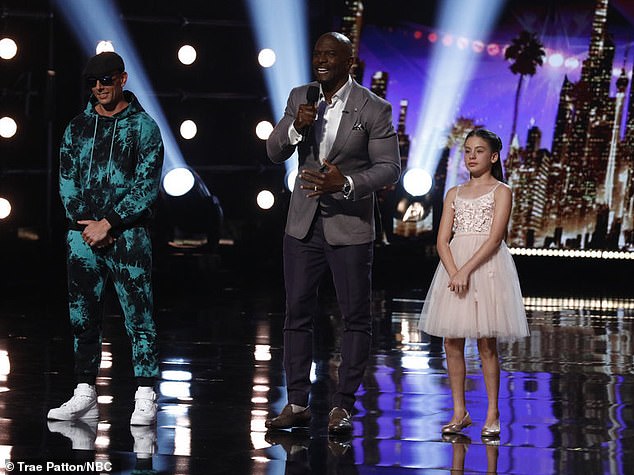 Judge vote: The judges were forced to vote between Alex and Emanne

Julianne called Emanne a ‘gift from another planet’ as she chose her for the finals.

Howie cited Alex’s ‘originality’ as he voted for the blacklight painter.

‘Thank you so much. Thanks for everything. I’m really excited!,’ Emanne said after Simon cast the key vote sending her into the finals. 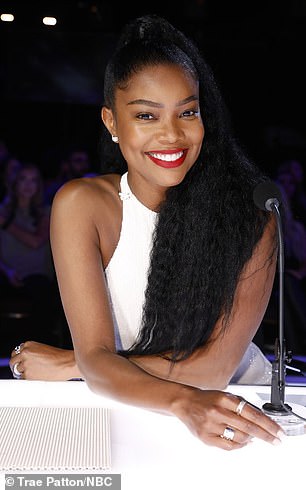 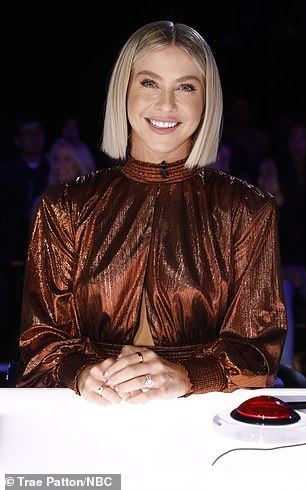 High praise: Gabrielle Union gushed about Emanne’s voice and her ‘intangibles’, while Julianne called her a ‘gift from another planet’ 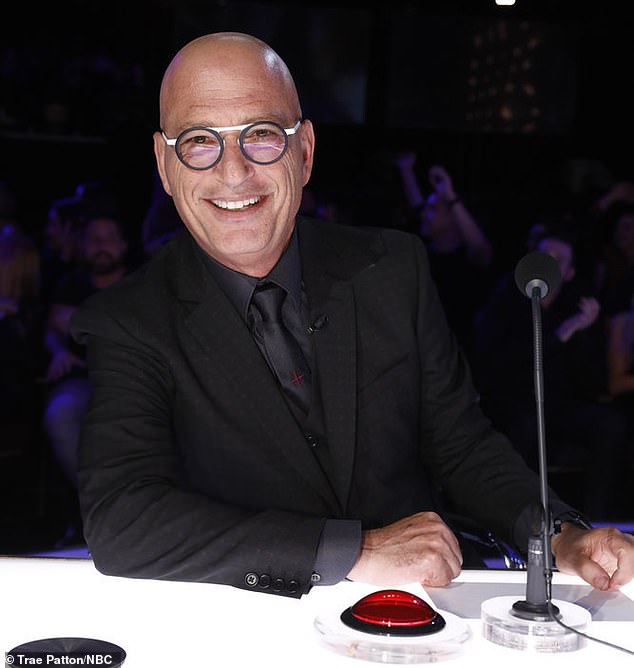 Dissenting vote: Howie Mandel voted for Alex to go to the finals citing his ‘originality’

The live show started with a performance by London pianist and Britain’s Got Talent winner Tokio Myers, 35, with the Police drummer Stewart Copeland, 67, on percussion.

Show host Terry Crews, 51, announced that the first group advancing was the acrobatic dance group V Unbeatable who was the Golden Buzzer pick of Gabrielle’s husband Dwyane Wade when he was a guest judge.

They moved into the finals as singer Chris Klafford and magician Dom Chambers were eliminated. 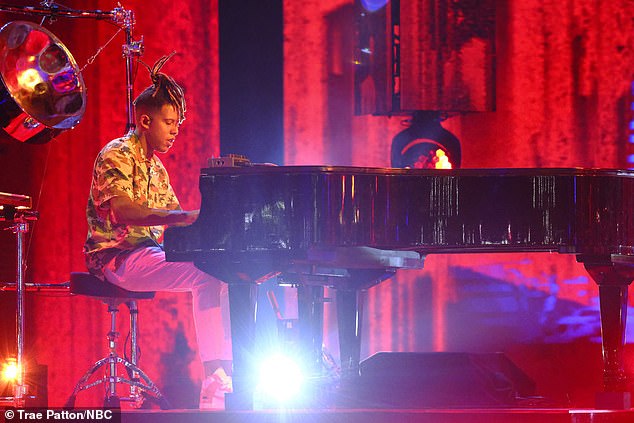 Musical guest: Tokio Myers opened the show with a performance 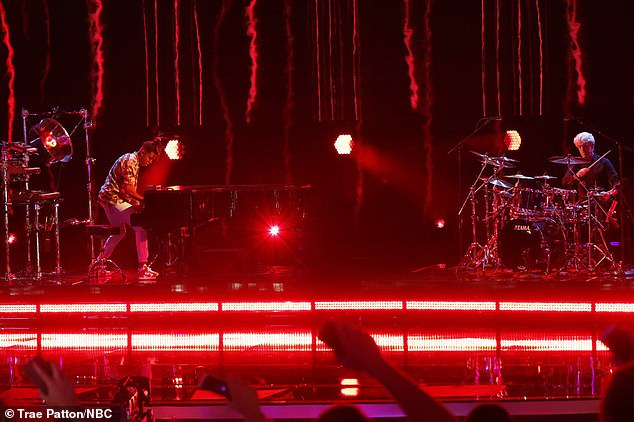 On percussion: Police drummer Stewart Copeland was on percussion for Tokio’s performance 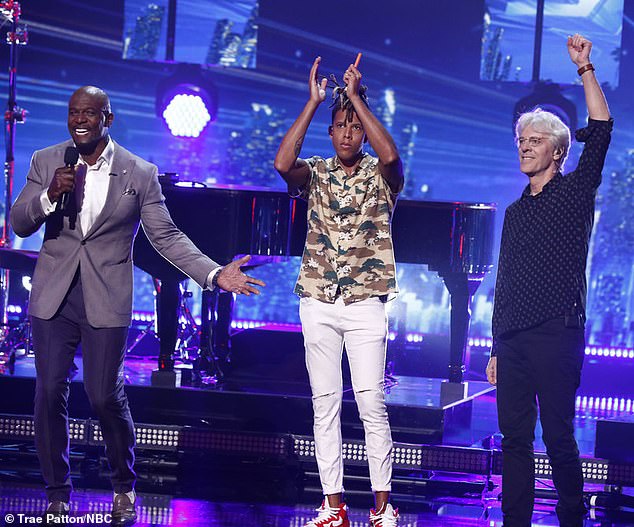 Killed it: Show host Terry Crews stood next to Tokio and Stewart as the crowd applauded 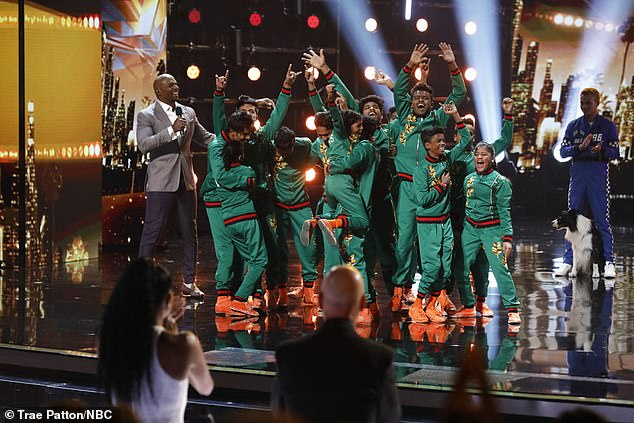 First in: The dance troupe V Unbeatable was the first act to advance into the finals

Piff The Magic Dragon who reached the AGT finals in 2015 performed a magic trick involving Terry’s diamond-encrusted watch that he later pulled from a baked cake.

Detroit Youth Choir after performing High Hopes by Panic! At The Disco on Tuesday were the next to advance as guitarist Marcin Patrzalek and dog act Lukas & Falco were eliminated.

Voices Of Service moved into the finals next as young singer Luke Islam failed to advance. 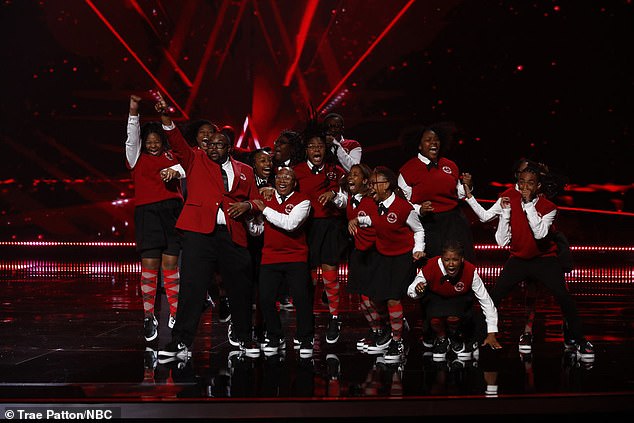 Next in: Detroit Youth Choir was the second act to advance 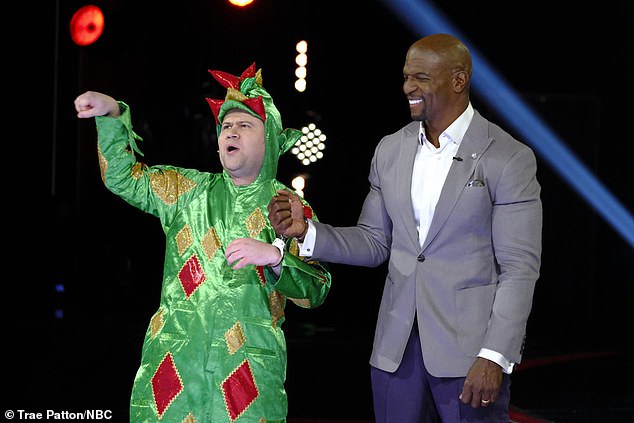 Magic act: Piff The Magic Dragon was back and used Terry’s watch for his magic act 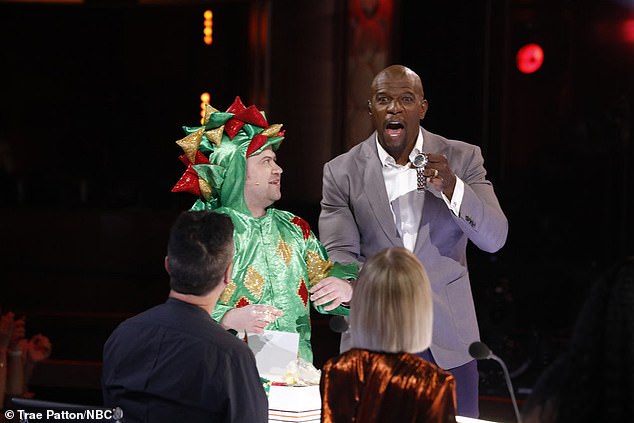 Cake surprise: Terry reacted after Piff The Magic Dragon pulled his watch out of a baked cake

America’s Got Talent will return Tuesday on NBC with final performances followed by the season finale Wednesday.

Season 13 of AGT was won by magician Shin Lim in September 2018.

America’s Got Talent premiered in June 2006 on NBC and the first season was won by singer Bianca Ryan, 25. 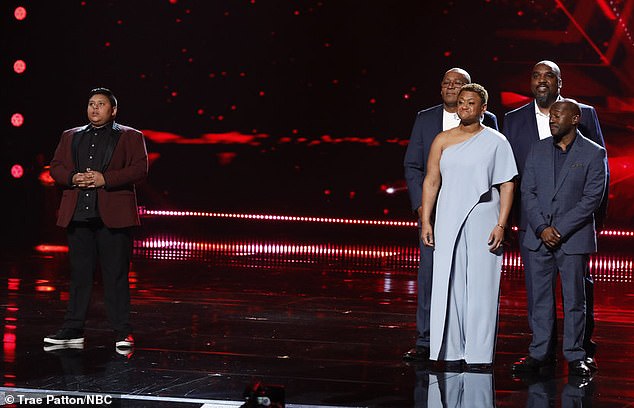 Talented singers: Luke Islam and Voices Of Service waited to learn their fate 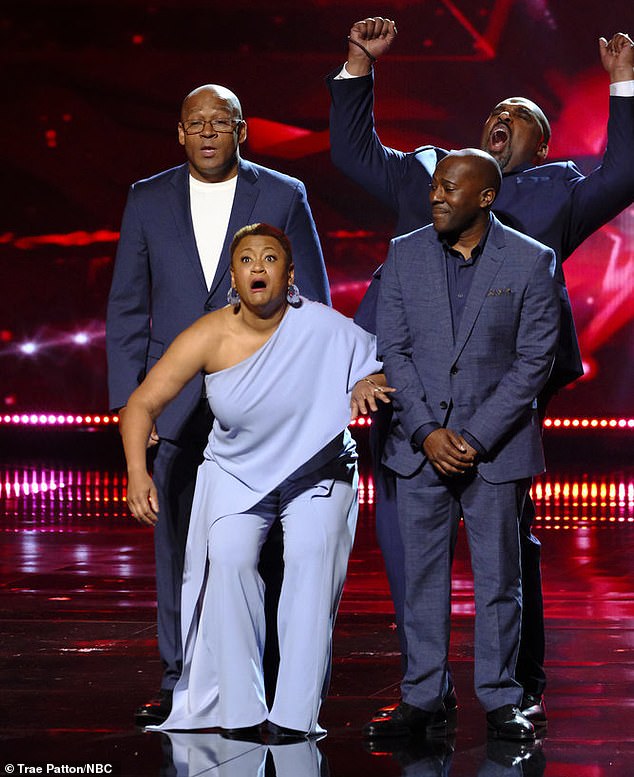 Stunned reaction: Voices Of Service were stunned as Terry announced they made the finals 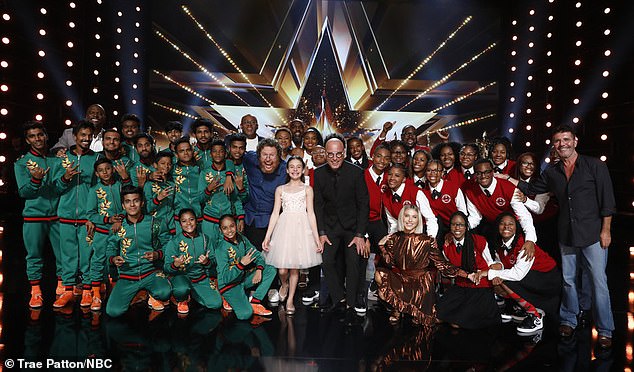 Fab five: The acts that advanced to the finals Wednesday got together with the judges for a group shot