Americans and Brits are arguing over which country has the strangest foods after one Twitter user went viral for making fun of a chip butty.

This weekend, an American Twitter user named Jack shared a photo of the dish and wrote: ‘Just learned about chip buttys, which is an English food that is literally just French fries in between two slices of bread. This is just making me so irrationally angry.’

His tweet soon ignited a transatlantic war, wherein Americans mocked dishes like beans on toast and crisp butties and Brits fired back by questioning spray cheese and ‘Thanksgiving in a can.’

Snack time: An American Twitter user named Jack shared his surprise that Brits eat ‘chip butties,’ which he described as ‘French fries in between two slices of bread’

Jack’s tweet about chip butties has gone viral with over 115,000 likes — and lots of responses.

‘I hate British people and their foods. What an abomination,’ wrote one.

Several other Americans chimed in with other British dishes they find questionable.

‘Guys this isn’t even the worst,’ wrote a woman who posted a picture of beans on toast, ‘BUT when I first came to this country I was served this… when I tell you I felt personally attacked.’

Another said his British cousin eats potato chips — or crisps in the UK — on bread.

‘He needs therapy,’ he added.

Yet another commenter shared an image of Stargazy pie, a Cornish dish made with pilchards or sardines, eggs, and potatoes baked inside a crust. The fish heads poke through the crust to gaze at the stars. 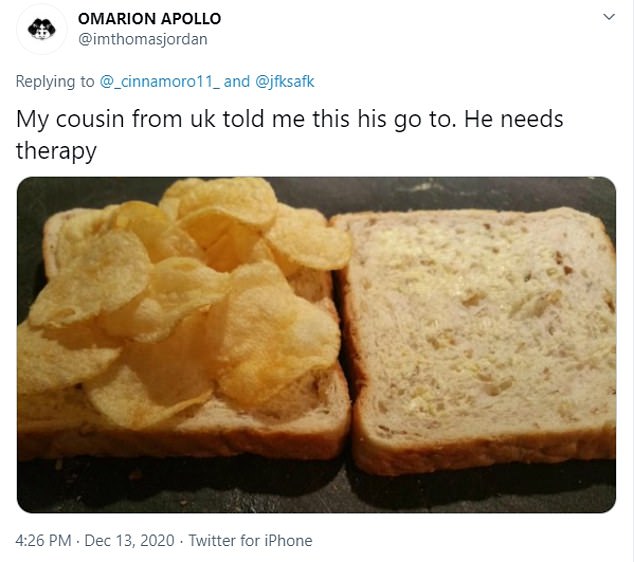 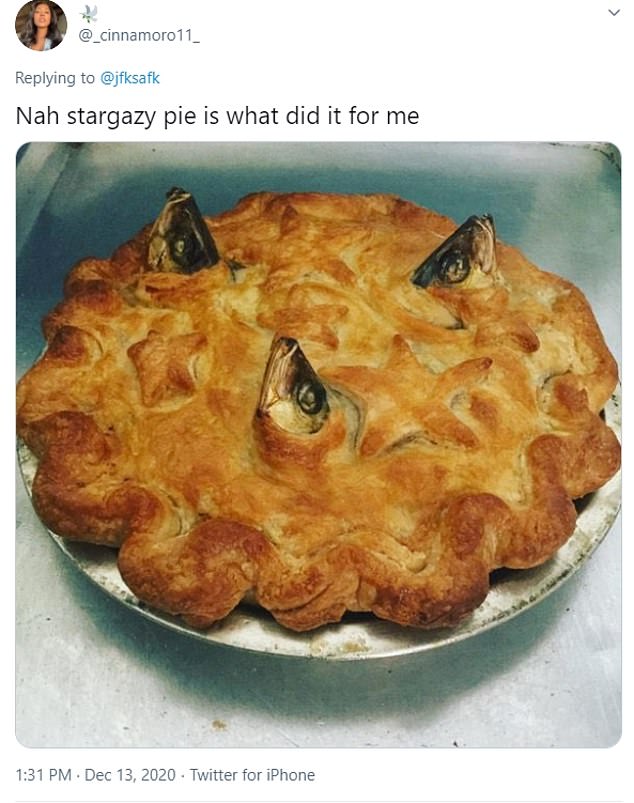 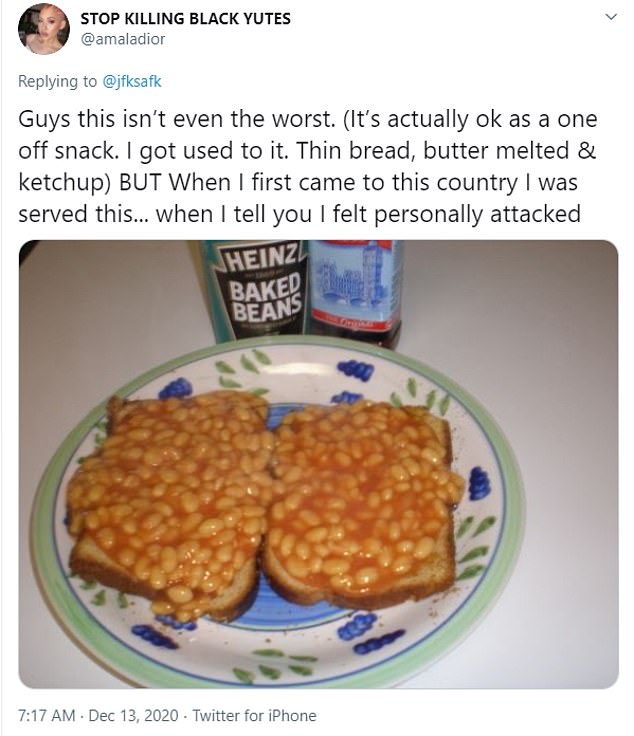 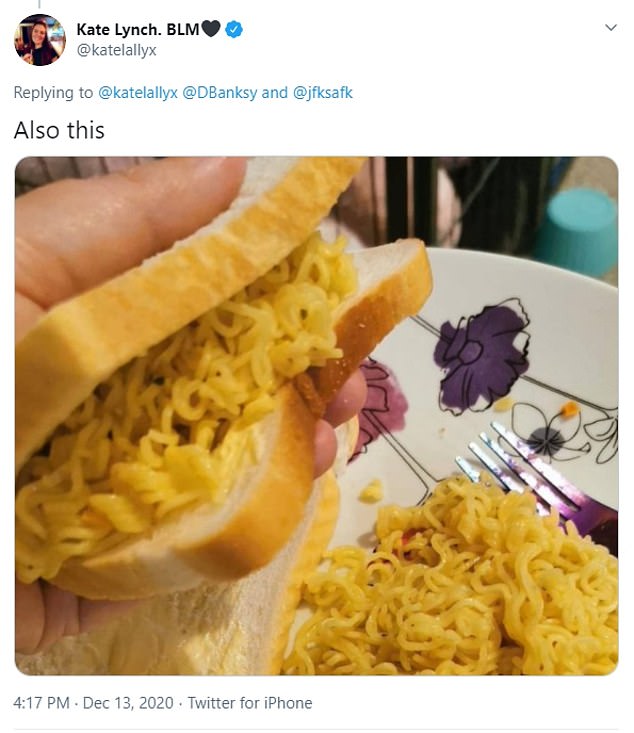 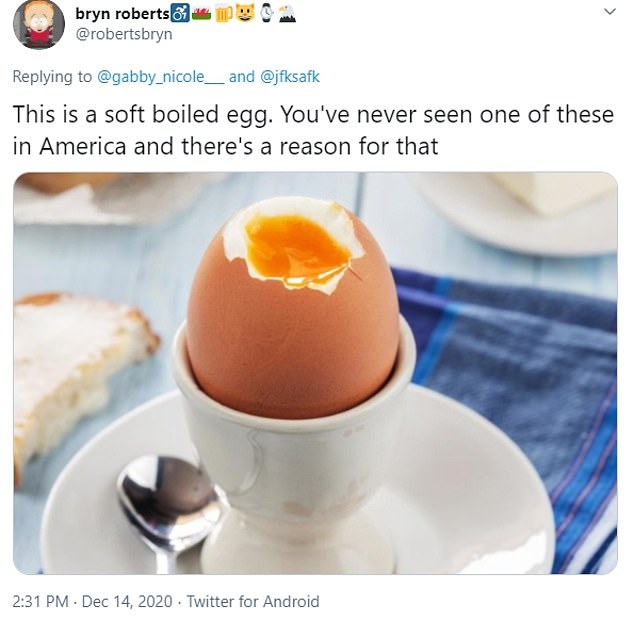 What a menu! They took issue with soft-boiled eggs, crisp butties, beans on toast, and Stargazy pie

It wasn’t long before Brits found the thread and rushed in to defend themselves and their favorite foods — and mock Americans for the worst of their cuisine.

‘Americans shouldn’t be allowed to criticize any other countries [sic] food,’ wrote one.

‘We are absolutely not taking s*** from a nation that invented funnel cake,’ wrote another.

Several British commenters started questioning American foods, with one insisting that ‘scones and lumpy white sauce’ are not ‘biscuits and gravy.’

‘These are biscuits and gravy,’ she wrote, posting photos of what Americans would call brown gravy and cookies. 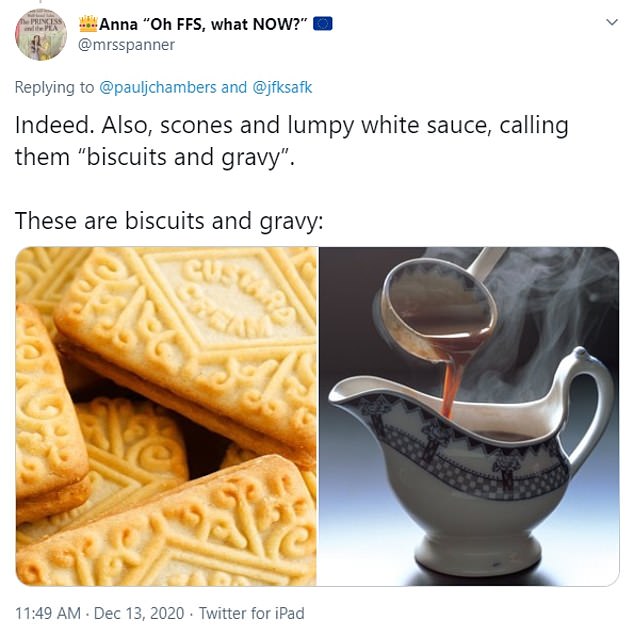 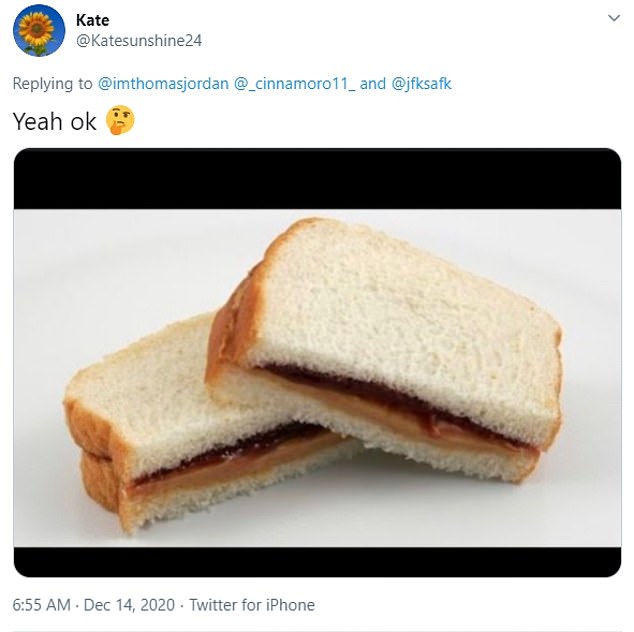 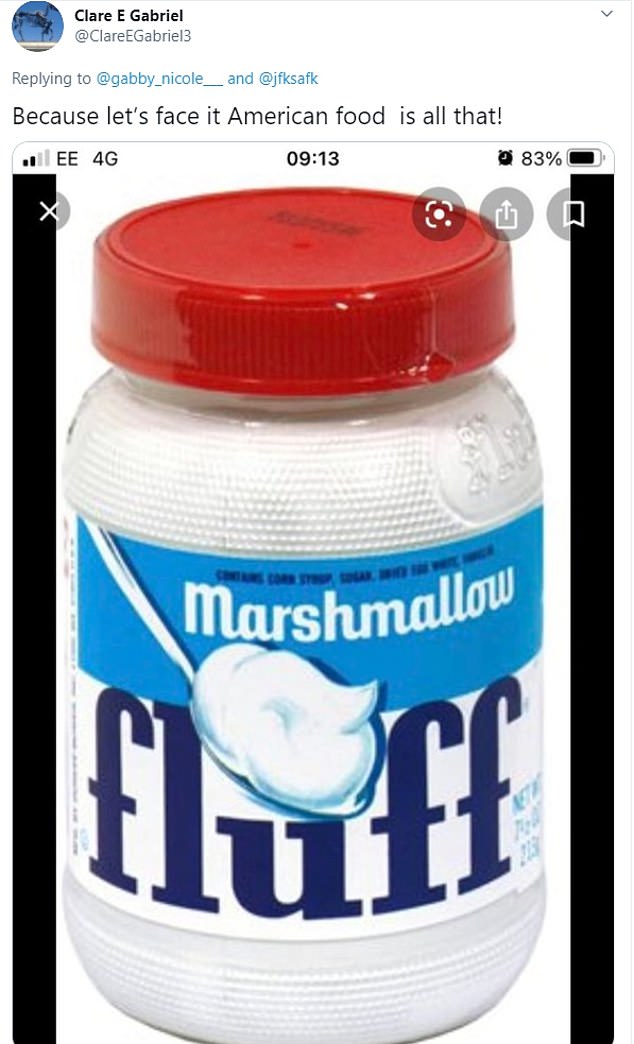 Goes both ways! Brits soon started mocking foods that are distinctly American, like marshmallow fluff, ‘Thanksgiving in a can,’ and burgers with donuts for buns

Other Twitter users made fun of peanut butter and jelly sandwiches, marshmallow fluff, cheese in a can, fried state fair food, and Hershey’s chocolate.

They said: ‘And what’s that chocolate that Brits bring back from the US for a laugh? The stuff that gets thrown in the bin at the end of the day because it tastes like someone vomited up stale cheese? Hershey’s?’

‘Hershey’s is literally the work of Satan,’ another concurred. ‘I’ve tasted lots of average chocolate but It’s the only chocolate that I’ve spat out because it’s so inedible. Like soap with added sugar & evil.’

Another complained: ‘I’ve been to the US and people there got me eating grits.’

One suggested that someone from ‘the country that eats donut burger buns’ shouldn’t cast stones.

One man shared a horrifying image of Sweet Sue Canned Whole Chicken, an entire raw chicken in a can — which does, in fact, exist, but isn’t especially common. 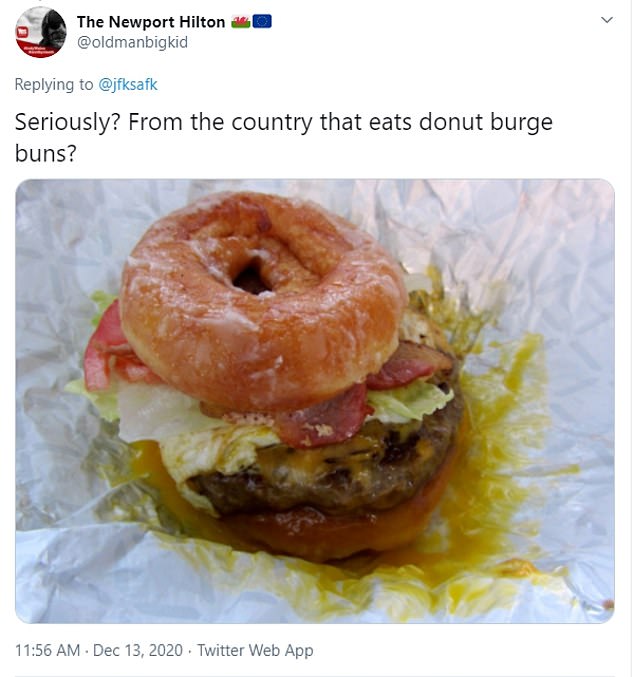 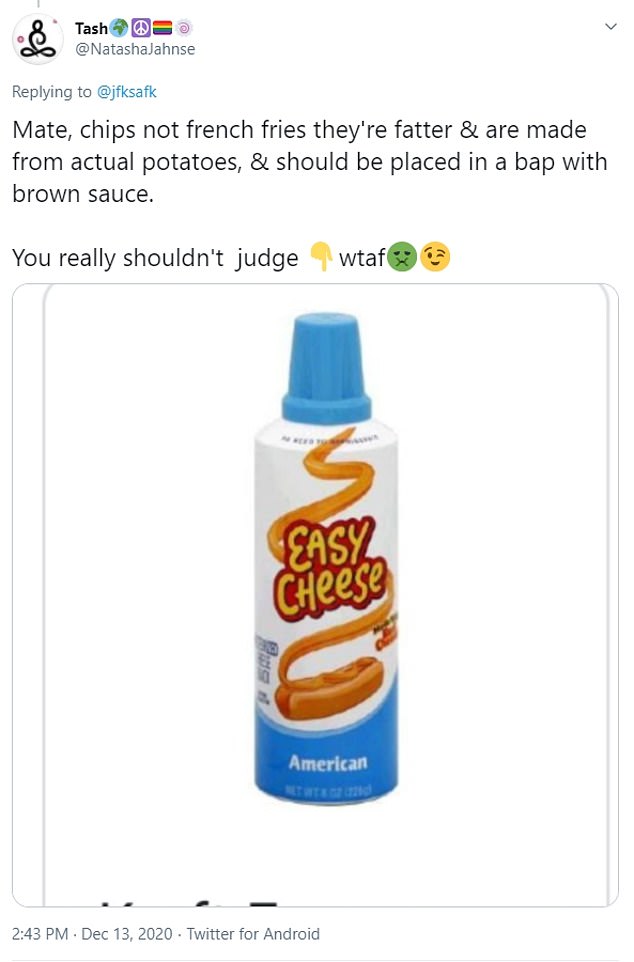 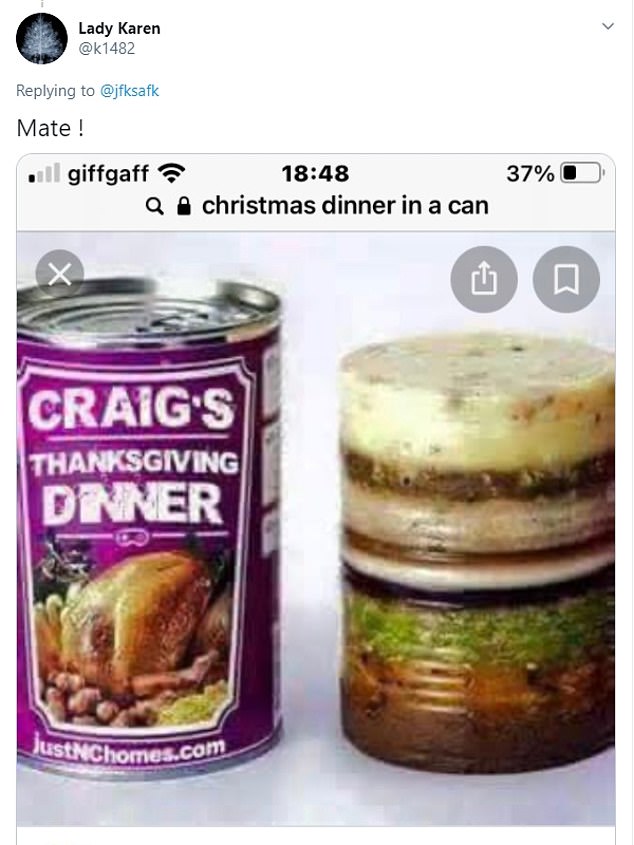 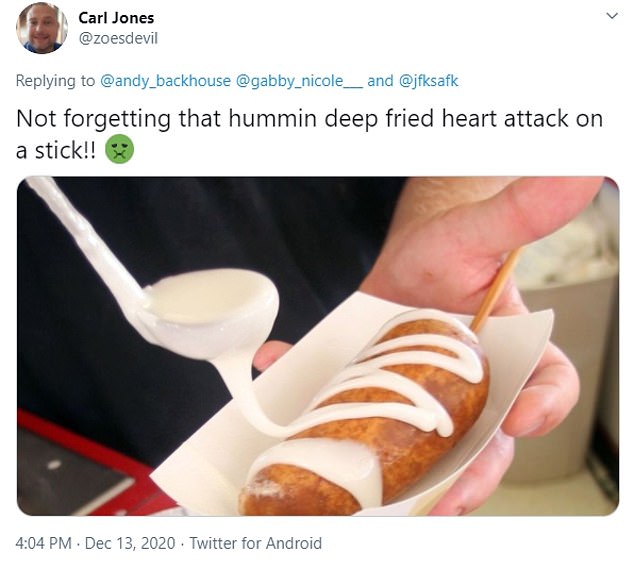 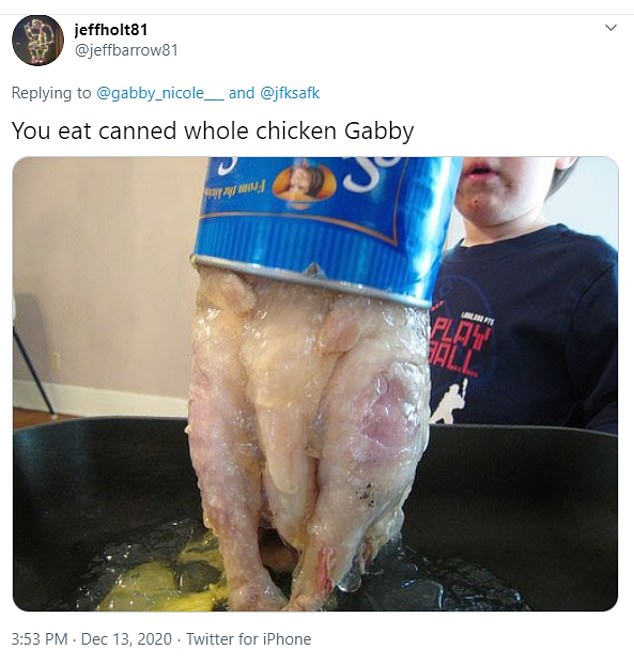 Odd: Some of the most-criticized items are fairly uncommon, like this bizarre chicken in a can

Lost in translation: They also took issue with the description of a chip butty; in the US, the term ‘French fry’ is used for all fried potatoes, no matter the size

Meanwhile, other commenters took issue with the original poster calling it ‘French fries’ on bread, insisting that the dish uses chips, which are thicker.

They also pointed out that the sandwich in the photo doesn’t appear to have butter on it, a crucial ingredient.

‘Chips, not French fries. And the bread is buttered. Hence the name,’ wrote one.

‘Actually, the bread has to be thickly buttered. And the chips have to be soft, thick chips, not French fries,’ lectured another.

In the US, fried potatoes of any width are called French fries. Chips in the US are what are called crisps in the UK.