It was an unofficial American Idol reunion on Monday morning.

Talk show host and singer Kelly Clarkson was honored with star on the Hollywood Walk of Fame in Los Angeles. Also seen at the event were American Idol vets Randy Jackson, Simon Cowell, and Paula Abdul.

The Stronger crooner looked lovely in a black dress with black boots and a gold necklace.

All together! It was an unofficial American Idol reunion on Monday morning 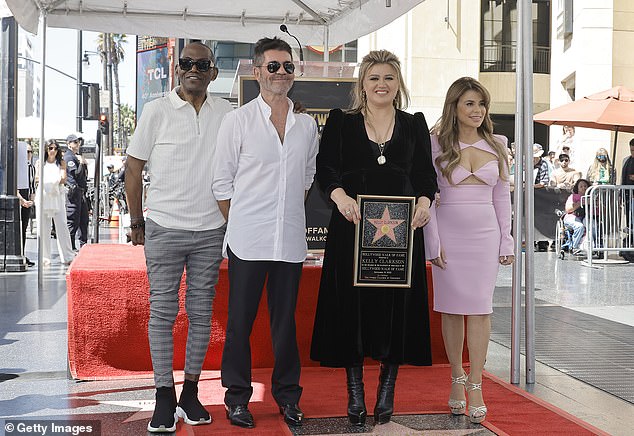 They go back 20 years: Talk show host and singer Kelly Clarkson was honored with star on the Hollywood Walk of Fame in Los Angeles. Also seen at the event were American Idol vets Randy Jackson, Simon Cowell, and Paula Abdul

Kelly beamed with pride as she posed with her former American Idol costars.

Immediately after winning AI, Clarkson was signed to a record deal with RCA Records. That same year her debut double-A-side single, Before Your Love/A Moment Like This was released.

At the event, Kelly stunned in black as she pulled her blonde hair back. 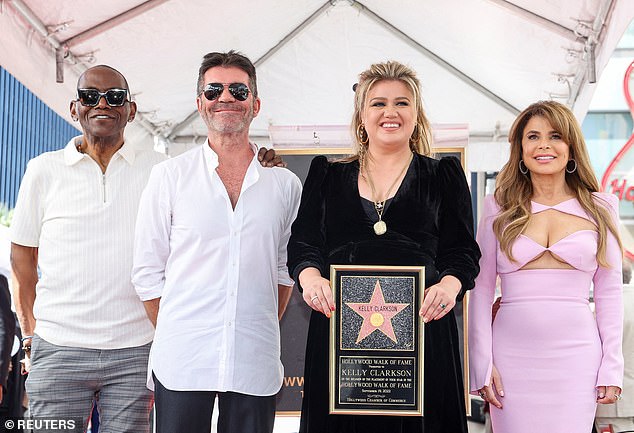 The four of them: From left, Randy, Simon, Kelly and Paula side by side 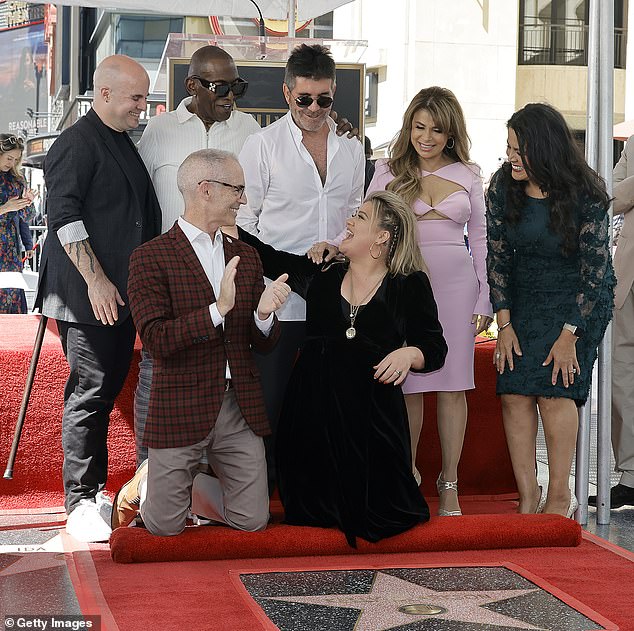 And Paul Abdul looked fantastic in a pal pink dress with cut outs on the chest and tummy. She added gold platform heels.

All three former Idol judges spoke about Kelly during her ceremony.

‘Where we were very lucky with Kelly was that not only could we find someone with a hell of a good voice, but she also had this amazing sense of humor, personality, charisma,’ Simon shared in a press release, adding that American Idol would not have so popular if not for Kelly.

Kelly’s star is the 2,733rd on the landmark and is located at 6801 Hollywood Blvd in front of Ovation Hollywood.

Also at the event were her two kids, River and Remington whom she shared with ex Brandon Blackstock. 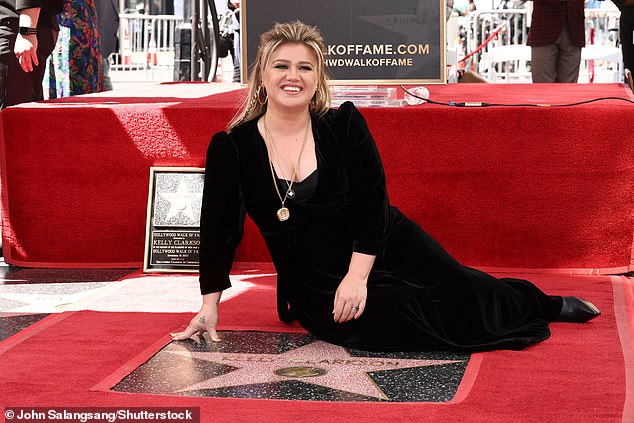 A lovely look for this lady: Kelly wore a black dress with black boots

Kelly and Brandon married in 2013 and became parents to daughter River and son Remy before splitting in 2020 with the singer filing for divorce citing irreconcilable differences.

The divorce was finalized in August 2021.

Meanwhile, Kelly will lift the lid on her split from husband Blackstock on her new album.

The 40-year-old singer is preparing to release her first record in five years in 2023, and the new songs will focus on her heartache as her marriage broke down – with the star writing around 25 tracks a week in the aftermath of the couple’s separation back in 2020. 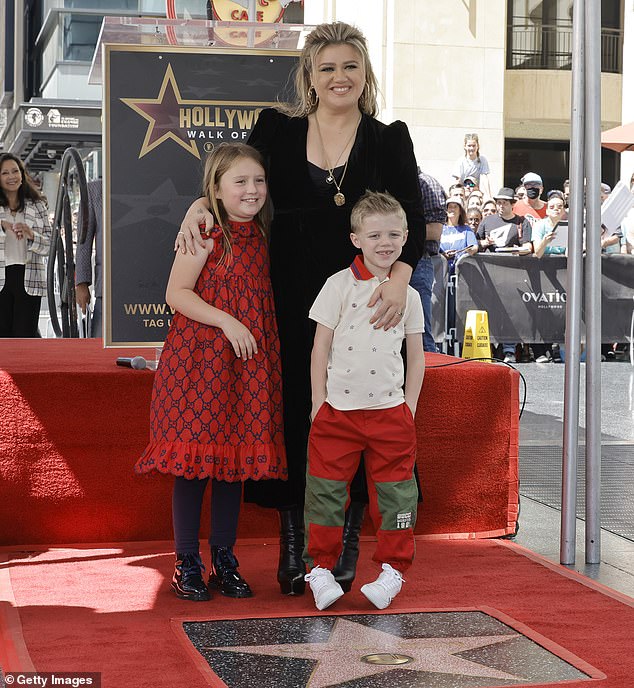 Her kids: Also at the event were her two kids, River and Remington whom she shared with ex Brandon Blackstock. Kelly and Brandon married in 2013 and became parents to daughter River and son Remy before splitting in 2020 with the singer filing for divorce citing irreconcilable differences 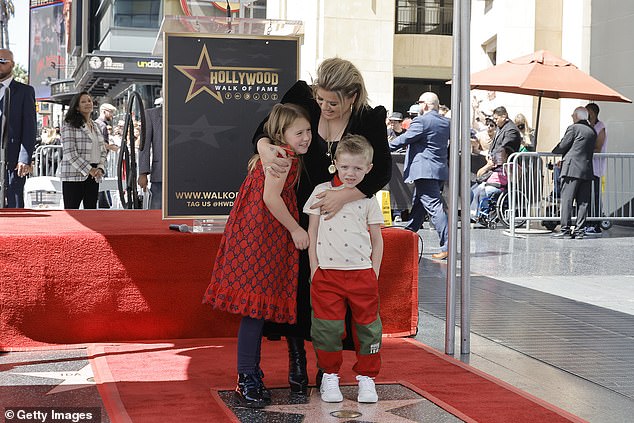 Such a sweet day: She seemed happy her little ones were there; they wore red

Speaking in an interview with Variety published this week, Kelly explained: ‘When my ex and I first separated, there were many emotions. It was hard. My producer and I were laughing yesterday because I was like, ‘Remember that time we wrote, like, 25 songs in a week?’

‘A lot of those are the ones that are on the album. I literally wrote most of these almost two years ago. Then I told my label, ‘I can’t talk about this until I’ve gone through it’, and it’s just taken some time to do that.’

The ‘Because of You’ hitmaker insisted she wasn’t focused on her music for a long time due to other work commitments as well as raising her two kids with Brandon, but the divorce prompted her to get back to the studio. 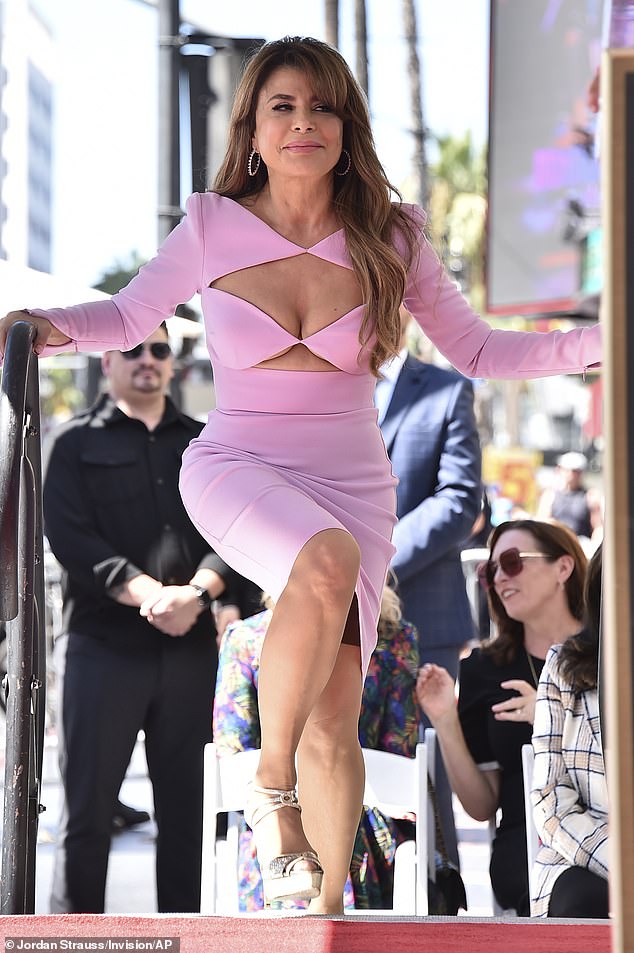 How does she do it? Abdul looked incredible in her pink dress as she flashed a bit of Spanx

She added: ‘I hadn’t really been working hardcore on an album until I needed to. I was just very busy. There were so many jobs, and I’m a single mom – well, even with being married, it’s a lot, trying to fit kids’ schedules in and all that stuff.

‘But then the whole divorce thing happened, and I needed to write it. And then I didn’t know if I was going to release it, because you can be very angry in that state of mind. So some of the songs, they definitely cover the gamut of emotions; there’s everything on the album.’

The ‘Since U Been Gone’ star added of the new record: ‘It’s almost like the arc of a relationship, because the beginning is so beautiful and so sweet, and then it evolves. And sometimes it doesn’t evolve how you want.’ 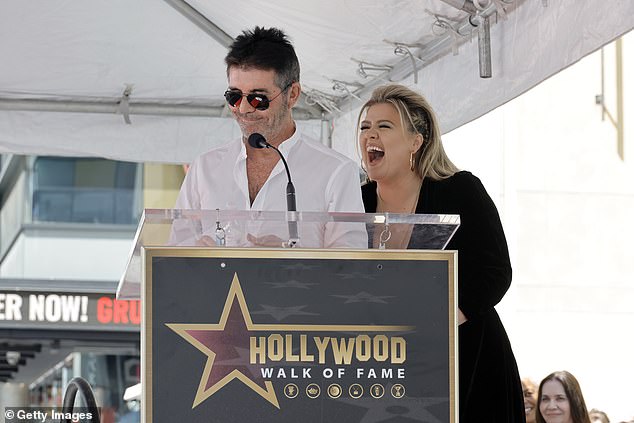 That good ole humor: Kelly smiled as Simon took to the podium

This comes after Kelly shared with Dolly Parton their new spin on the former’s classic ‘9 to 5’.

Their sombre new rendition features in the upcoming film ‘Still Working 9 to 5’, which is all about the blockbuster 1980 comedy film ‘9 to 5’, which Dolly starred in alongside Jane Fonda, Dabney Coleman and Lily Tomlin.

Dolly had said last month: ‘I was blown away when I heard what Shane [McAnally, producer] had done with my song.

‘This arrangement shows how differently a song can be done and the story can be told in a whole new way. A special thanks to Steve Summers [Dolly’s creative director] for getting the ball rolling on this whole musical venture.’