America will have the biggest monkeypox outbreak in the world within days, statistics suggest amid ramped up testing that is picking up the disease in areas where it had previously spread ‘uninterrupted’.

The Centers for Disease Control and Prevention (CDC) said 3,487 cases of the rash-causing virus had been detected as of Tuesday, behind only Spain with 3,596 confirmed infections.

But by population — which takes into account the U.S. having seven-times more people — America’s has about one case per 100,000 people compared to Spain’s tally of seven per 100,000. Its infection rate is also below many other European countries including the UK and Germany (both at three per 100,000).

The U.S. may also now be carrying out more tests for the disease than its European neighbors — meaning it is more likely to detect cases, after it expanded capacity from 10,000 to 80,000 swabs per week.

Dr Bill Hanage, an epidemiologist at Harvard University, warned that it was ‘reasonable’ to suggest America’s cases tally would ‘outpace’ those in other nations. He said the surge was in part down to the surge in testing, which was detecting monkeypox in areas where it had previously spread under the radar.

Experts fear the disease has already spilled over into more vulnerable groups, such as children under eight years old that health officials say are at high risk of severe disease. Two children — in California and ‘transiting through’ D.C. — have tested positive for monkeypox to date, the CDC says.

America’s response to monkeypox was slammed for being too slow to roll out tests and vaccinations at the start of the outbreak, especially to gay or bisexual men where most cases are being recorded. No deaths have been registered to date but several patients have been hospitalized.

The above graph shows the cumulative tally of cases in the US, and the current total compared to that in other nations worldwide. The US only reports cases during weekdays, and not at weekends. Its latest figure is for July 25, while that for Spain — which has the largest outbreak — is for July 22. 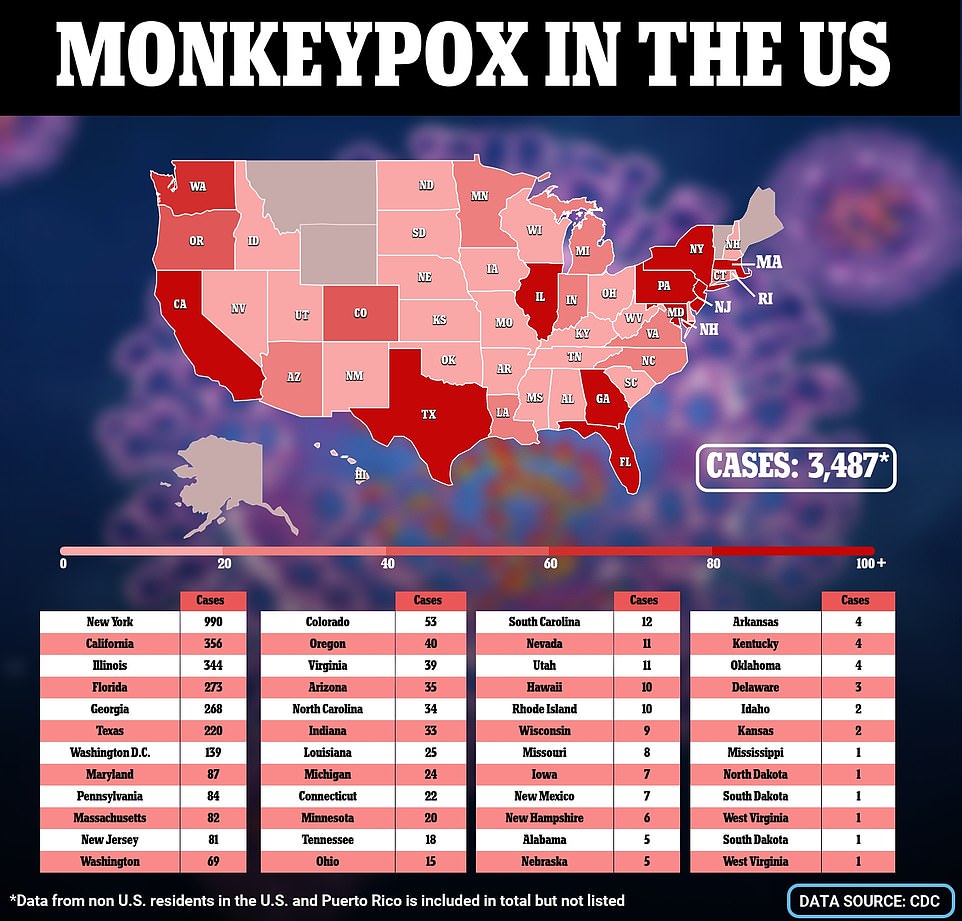 The above map shows monkeypox cases across the U.S., as reported to the CDC. Only four states — Maine, Montana, Vermont and Wyoming — are yet to pick up the virus 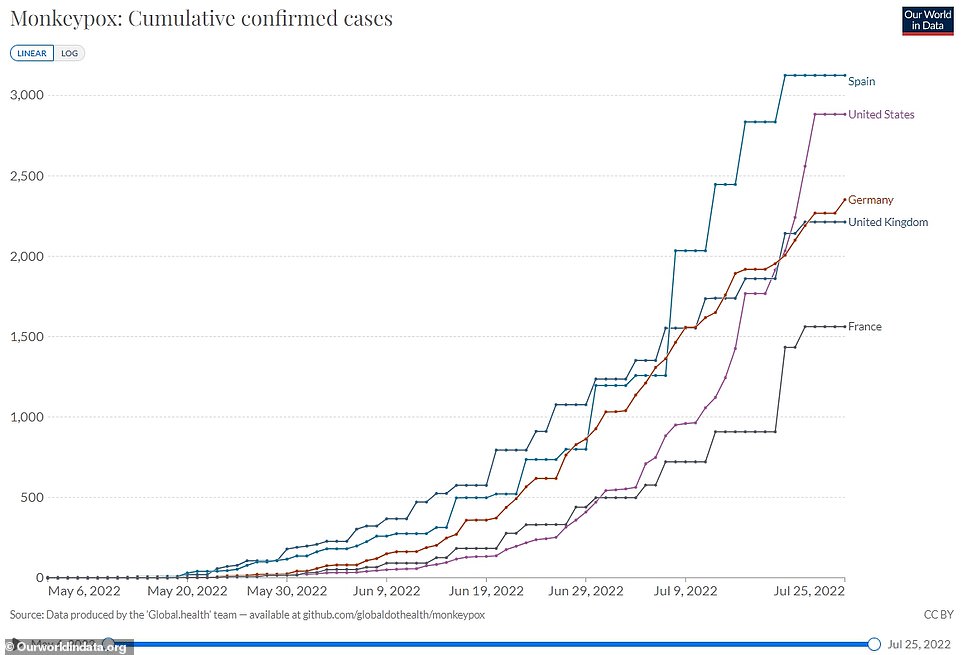 The above graph shows the cumulative tally for monkeypox cases in the five countries that have reported the most infections in the world. It reveals Spain has the most cases, followed by the United States and Germany 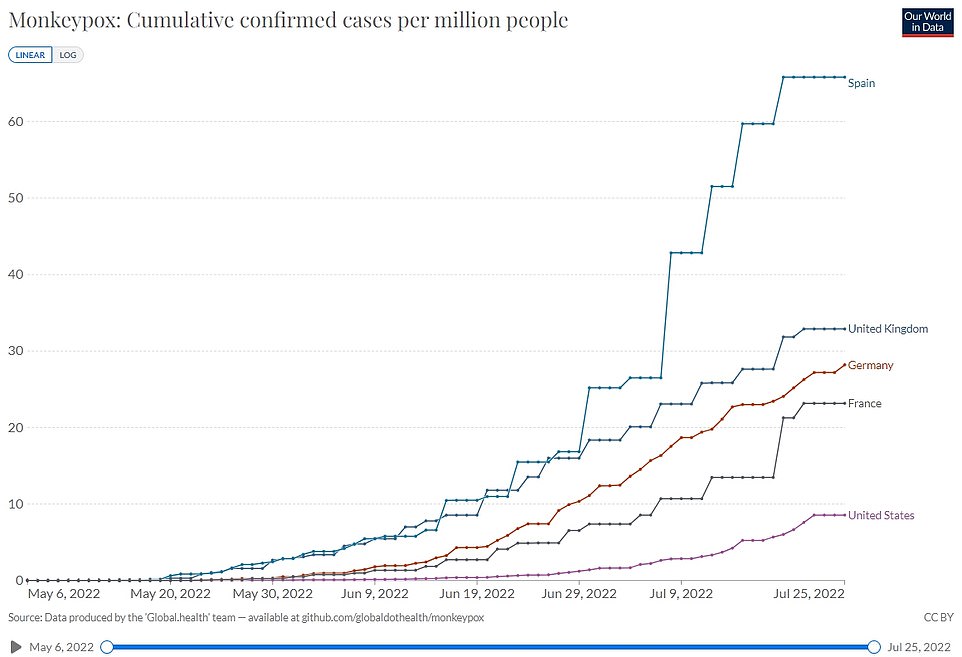 But when the data is shown per population — as revealed by the above graph — it shows the outbreak in Spain far outpaces that in America. The U.S. has about one case per 100,000 people, putting at the bottom of the five countries with the most cases reported to date. Spain’s outbreak is far ahead of that in other nations

The United States has been updating its monkeypox tally every weekday, with the latest figures up to July 25.

But Spain has been publishing its tallies every two to three days, with the latest data only from the date July 22. On July 19, Spain reported 3,125 cases.

DailyMail.com averaged the daily rise in cases over the latest seven days available to calculate how fast they were ticking up every 24 hours. This showed the U.S. is currently recording about 216 monkeypox cases a day on average, while in Spain 108 per day are being detected.

Washington D.C. has postponed its roll out of second doses of the monkeypox, joining New York City.

Its Department of Health revealed the move Monday, citing ‘very limited’ supplies of the jabs and a fast increase in cases.

They said: ‘This is extremely important because getting more individuals vaccinated with their first shot will help us contain the virus.’

America is rolling out the two dose Jynneous vaccine to fight monkeypox, with the second dose due to be given four weeks after the first.

But some experts say it is possible to widen the gap — as was done with the Covid vaccine in other countries — to ensure more people can be inoculated first.

A Food and Drug Administration vaccines adviser has warned against the move, however, saying no studies have been carried out to determine whether it will ensure the jabs are still effective.

Both New York City and Washington D.C. are offering monkeypox jabs to gay or bisexual men with multiple sexual partners.

Based on these figures, America’s tally could rise above Spain’s as early as Saturday this week. It is unlikely that another European nation will surge ahead as experts say many — including the UK — are now seeing their outbreak start to peak.

Asked whether the U.S. would soon have the worst outbreak, Hanage said: ‘The U.S. was slow to kick off widespread testing, and so now is detecting transmission chains that have been carrying on uninterrupted for some time. We don’t know how much increased awareness, especially in the core communities of gay and bisexual men, will slow transmission down.

‘But it is reasonable to suggest that the U.S. case count will continue to grow and will outpace the outbreak’s elsewhere.’

Spain is at the center of Europe’s monkeypox outbreak, being among the first country’s to report the disease — with early cases linked to unsafe sex among gay or bisexual men at a venue outside the country’s capital, Madrid, and a Pride event in the Canary Islands.

Since then the vast majority of cases have been detected in the same group, but some have been spotted in women — often those living with gay or bisexual men. A three-year-old also tested positive for the virus.

Health authorities in the country have rolled out vaccines to close contacts in order to curb cases, but there have been problems getting hold of doses. Spain — like the U.S. — is using the Jynneous vaccine, but only had 200 doses available in early July. It has said more doses will be ordered, but has not specified a number.

In the U.S. cases were initially mostly linked to international travel, particularly to Europe, but many are now being detected in people who became infected in the country. Experts suggest the virus may have been transmitting for a while before it was detected.

Hotspots New York City and Washington D.C. are rolling out vaccines against the virus to gay or bisexual men with multiple partners in two weeks to put a lid on the virus, but these programs have hit a brick wall with too few doses being supplied by the Federal Government. Both cities are now delaying second doses, due four weeks after the first, due to demand.

A total of 5million vaccines have been ordered so far, on top of the more than one million that were available when the program began.

Testing has also been ramped up after it was slammed early on for the stringent guidance on which samples could be tested leading to just 23 swabs being checked for the virus a day early in the outbreak.

Five commercial labs have been brought onboard now with a combined capacity for about 80,000 swabs per week.

Daily tallies have rocketed since, with the biggest daily increase yet reported last Thursday with 298 cases spotted within 24 hours.

Over Friday, Saturday and Sunday another 596 cases were recorded — or 198 per day —, CDC figures show, but capacity is generally lower on weekends because many people are away from their desks.

Breaking the data down by area shows New York City currently has the largest outbreak at 1,040 confirmed infections according to its Department of Health. The CDC says the state has 990 infections at present. It was followed by California, at 356, and Illinois, with 341.

Only four states — Maine, Montana, Vermont and Wyoming — are yet to detect a single infection with the disease.

It is not clear whether other states — alongside New York — are preparing to start vaccinating gay or bisexual men where most cases are being detected to get a handle on the outbreak.

Monkeypox is normally confined to West Africa, but earlier this year it was picked up at a Pride festival in Spain.

Since then more than 40 countries worldwide — mostly in Europe — have spotted cases of the disease, which are mostly among gay or bisexual men.

Experts say the disease has likely already spilled over into other groups, however, which are more at risk. In the U.S., two children were found to have been infected last week.