Amber Heard has surrounded herself with a powerful group of women who are supporting her through Johnny Depp’s blockbuster libel trial in London – and the posse are ‘determined to have a good time in the capital’.

The 34-year-old actress has been partying with the glamorous women, dubbed ‘Team Heard’ who are rallying around her for the case, making eye-catching entrances each morning for the start of proceedings and organising a string of social outings.

‘Team Heard’ is made up of her sister Whitney, girlfriend Bianca Butti, British legal advisor Jennifer Robinson, who is friends with the Clooneys, American attorney Elaine Bredehoft and the actress’ assistant Sara, whose last name is not known.

Meanwhile, Depp has been locked away in a plush hotel suite dining alone because rules prevent him from discussing the case with anybody while giving evidence.

Depp, 57, is suing News Group Newspapers, publishers of The Sun, and executive editor Dan Wootton over a 2018 article which referred to him as a ‘wife beater’ with Heard the key witness to prove that he subjected her to a campaign of physical and emotional abuse.

A source told MailOnline: ‘The trial has been quite a contrasting experience for both of them. While Johnny has been alone and looking quite miserable, Amber appears to be having a great time. She looks really glamorous and happy. It’s as if she’s on a girl’s holiday.

‘The women she’s with have really got behind her. They’re strong, positive women who are delighted with the way things have gone in court so far. They’ve already had a few minor victories and are optimistic that they’re going to have more and are determined to have a good time while they are in London.’

Here, FEMAIL reveals who’s who in the squad of ‘strong, positive women’ who accompany Heard to court every day…

Amber and her squad: Amber Heard left court yesterday with her girlfriend Bianca Butti, left, her sister Whitney Heard, next to her partner, her lawyer in the green dress and her personal assistant Sara, seen far right 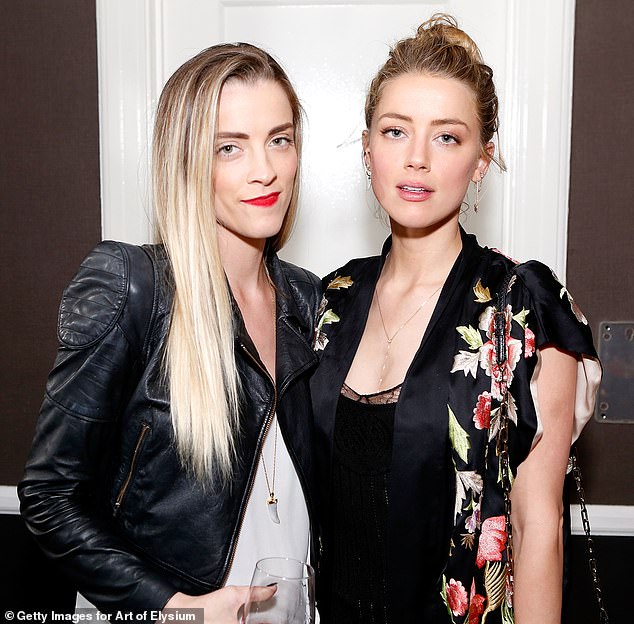 Amber and Whitney Heard (pictured left with her sister in 2016 in LA) grew up together in Austin, Texas, and are known to have a close relationship 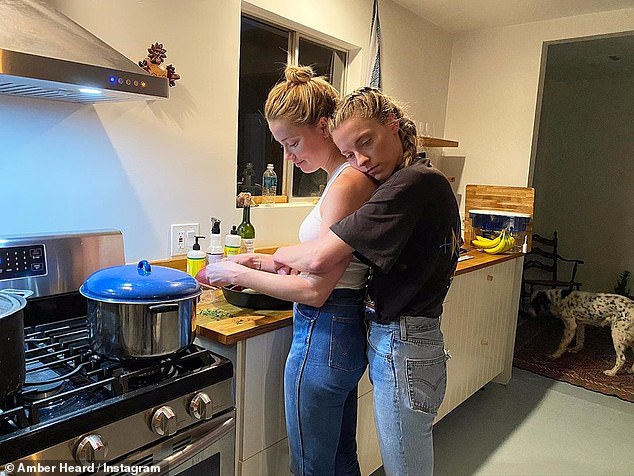 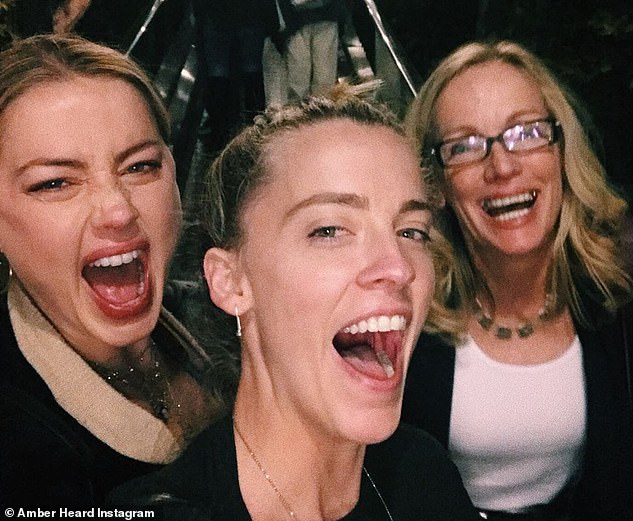 Amber (pictured left) with her younger sister and their mother Paige. The actress revealed in May that her mother had died 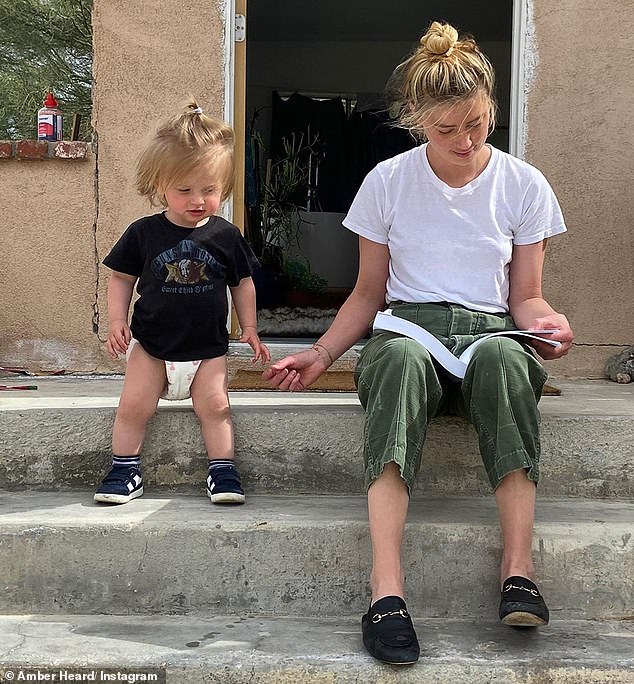 Amber sits next to her infant nephew Hunter in May. The youngster is sister Whitney’s son with her partner Gavin Henriquez

Amber and Whitney Heard grew up together in Austin, Texas, and are known to have a close relationship.

Whitney is also an actress and is set to give evidence during her sister’s trial, claiming that she witnessed Depp’s violence towards her sibling.

She appeared in a minor role in the 2007 caveman comedy Homo Erectus, which featured actors Adam Rifkin and Final Destination star Ali Larter.

The mother-of-one currently lives in Los Angeles with her family, her partner Gavin Henriquez, and their son Hunter, who was born in December 2019.

In May, Amber shared her ‘heartbreak’ as she revealed that her mother Paige had died. ‘I am heartbroken and devastated beyond belief at the loss of my mom, Paige Heard,’ she said in an Instagram post.

‘The kindness, support and generosity my sister Whit and I have received from friends and family has been utterly soul-saving,’ she added. 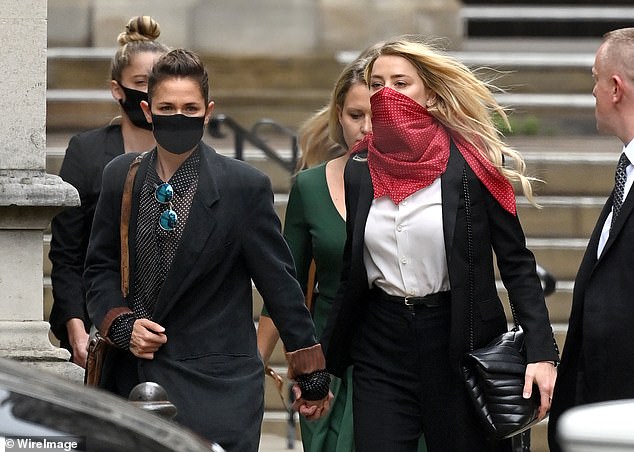 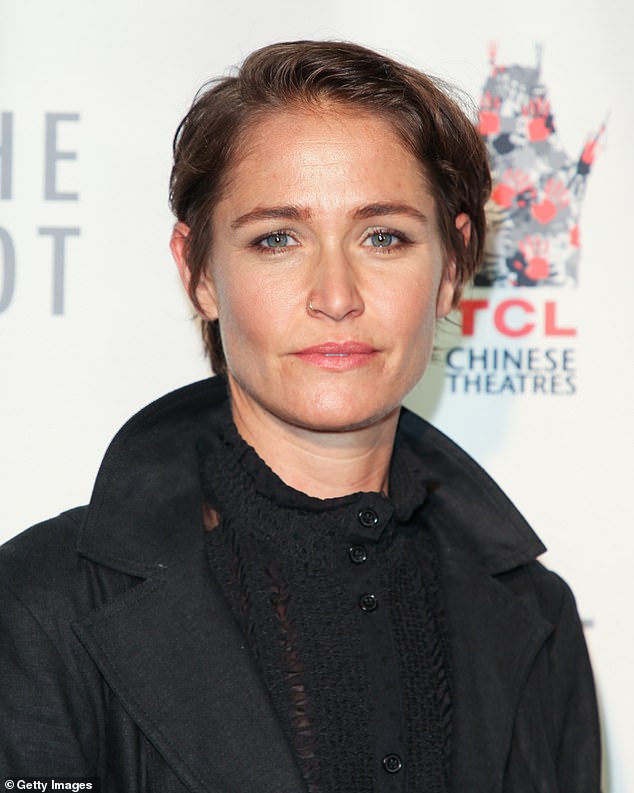 Bianca Butti (pictured in 2018), 38, is a cinematographer living in Los Angeles. Heard and Butti were first seen in public in May

Bianca Butti, 38, is a cinematographer living in Los Angeles. Heard and Butti were first seen in public in May.

But the couple, who have been dating since January, already seem quite attached – with sources calling Amber ‘happier than ever.’

‘Amber is fine and happier than ever,’ an insider told Us Weekly back in February. ‘Bianca has been very supportive of her, and Amber feels like she can trust her and be comfortable around her, especially since they were friends first.’

That source added that Heard is ‘enjoying spending time’ with Butti, and has even gone as far as to say she ‘really loves her.’

Last year, Miss Butti revealed she had been diagnosed with breast cancer for a second time, and bravely documented her struggles on an Instagram page, @buttibeatsit.

In a note on the page, Butti explained how she was first diagnosed with the disease in 2015 when she was just 34 years old, and that it was confirmed to have returned in March 2019.

‘I was beyond devastated,’ she wrote on Instagram. ‘A new tumour appeared in my right breast, almost 3 years since I was declared cancer free.’

For the first diagnosis she underwent a traditional western treatment of chemotherapy, surgery and radiation. Now, after extensive research and personal experience, she has decided to seek more alternative treatments.

Butti’s career as a cinematographer includes several episodes of Love & Hip Hop: Atlanta that aired in 2013, the upcoming Bella Thorne movie Leave Not One Alive, the thriller Uncanny and a few other independent films and shorts. 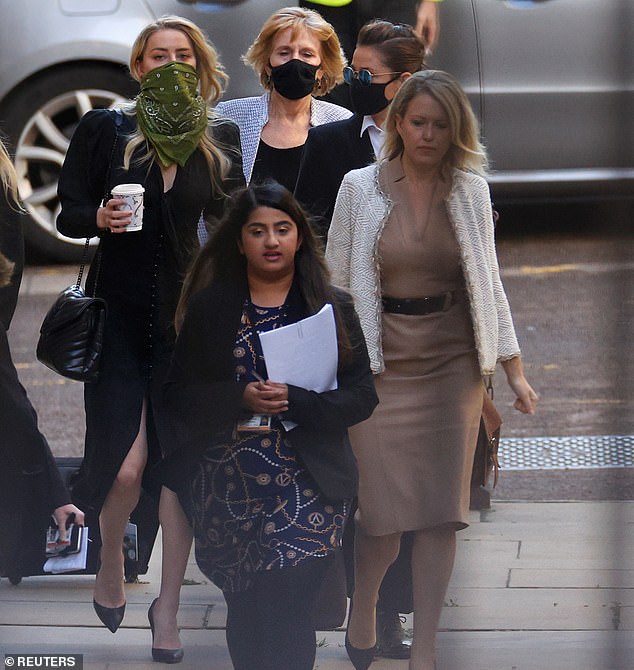 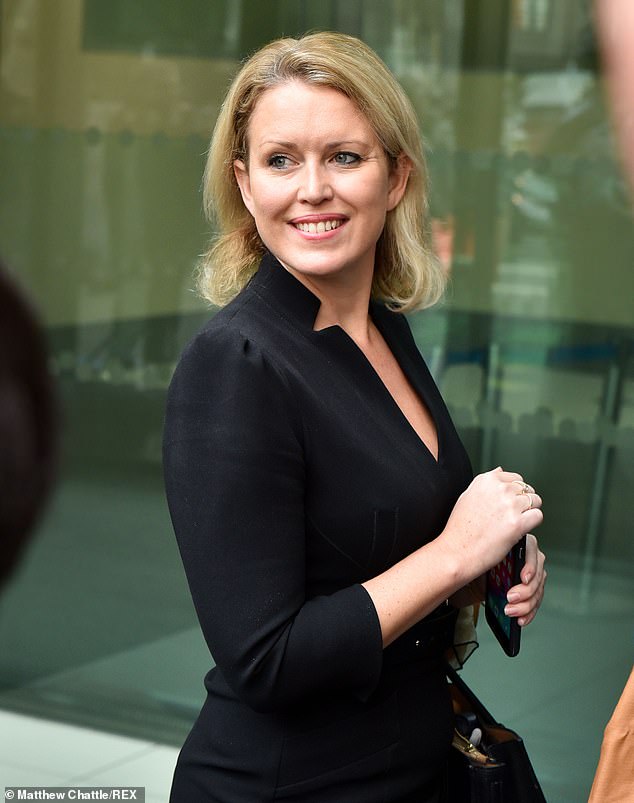 Jennifer Robinson, who held Amber Heard’s hand as she walked into the High Court on the first day, is a leading human rights lawyer from Doughty Street chambers who also represents Julian Assange.

The Australian has appeared at the International Court of Justice and given expert evidence at the UN and in Parliament.

Her areas of expertise are free speech and civil liberties, and she regularly advises newspapers on media law.

Ms Robinson is a close friend of Amal Clooney and attended her wedding to George in 2014, where she was asked to carry out bridesmaid duties. She arrived via Venice in a boat with fellow guest Bill Murray.

In 2017, she was seen canoodling with Jeremy Corbyn’s former spin doctor Seumas Milne – with her father later telling MailOnline that his daughter was just enjoying a night out and a ‘few drinks’ with a friend.

Her father Terry, a horse trainer from New South Wales, insisted his daughter is a ‘good girl’ who has been in a ‘few relationships’ but dismissed suggestions that she was having an affair with the married father-of-two.

In 2011 she gave an interview about her private life and described herself as ‘passionate’ and ‘infinitely curious’, and said: ‘My friends would probably add, “the eternal optimist” or “a bit bonkers”.’

She admitted that while being serious as a proud Australian she enjoys ‘taking the p**s’ and said she swears too much.

Ms Robinson also confessed that she ‘partied’ a lot when she was younger. She said: ‘London has too much fun on offer to be stuck at your desk all day and night’.

And responding to a question about the contents of her London fridge she said: ‘Nothing but a few bottles of champagne (and maybe a mouldy piece of cheese)’ because she so rarely eats at home.

She was also asked: ‘What comes into your mind when you shut your eyes and think of the word ‘law’?’ and replied: ‘Jude’ – a reference to the British actor.