Amber Heard has officially filed to appeal her defamation case against Johnny Depp, nearly two months after she was ordered to pay her ex-husband over $10million in damages.

Lawyers representing the actress, 36, on Thursday filed a notice to appeal the verdict at the Virginia Court of Appeals in Fairfax County, court records obtained by DailyMail.com reveal.

The move comes just a week after Heard was denied a request for a new trial.

In June, the Aquaman star was ordered to pay Depp $10.35million in damages at the end of an explosive six-week trial, when a jury ruled she had defamed the Pirates of the Caribbean star in a newspaper opinion piece published in 2018.

Amber Heard filed a notice appeal the ruling in her defamation case against Johnny Depp on Thursday, court records obtained by DailyMail.com reveal 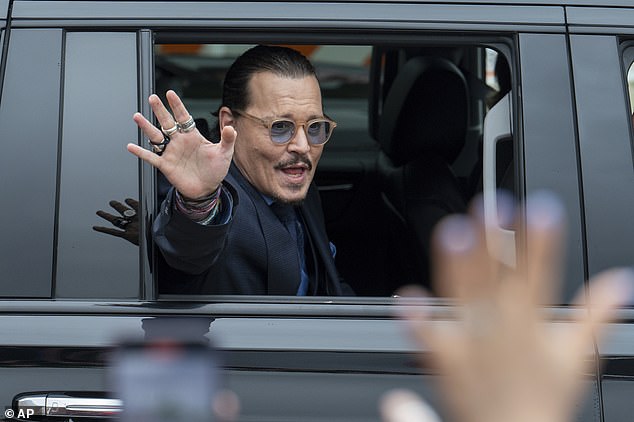 The actress was ordered to pay her actor ex-husband $10.35 million in damages after a jury found she defamed him in an op-ed about domestic abuse in 2018

Depp, 59, was awarded $15million in total – $10million in compensatory damages and $5million in punitive damages.

The judge later capped the damages at the state’s maximum of $350,000 leaving Depp with a total of $8.35million.

In contrast, Heard won just one of her three countersuit claims, which related to statements made by Depp’s lawyer suggesting she and friends had trashed their apartment before calling the police out.

The jury ultimately awarded her just $2million in compensatory damages out of the $100million she was seeking, and zero dollars in punitive damages.

Depp’s representatives reaffirmed their confidence in the court’s decision in a statement to DailyMail.com in the wake of Heard’s appeal application.

‘The jury listened to the extensive evidence presented during the six-week trial and came to a clear and unanimous verdict that the defendant herself defamed Mr. Depp, in multiple instances. We remain confident in our case and that this verdict will stand,’ a spokesperson for the actor said.

Earlier this month, Heard’s attorneys asked the judge to throw out the decision and declare a mistrial, arguing that one of the jurors on the case should not have been eligible to serve because his summons was intended for his father, who had the same name and lived at the same address.

The request was shot down in a written order last Wednesday, with Judge Penny Azcarate ruling there was ‘no evidence of fraud or wrongdoing’ by the juror and that the jury’s verdict should stand.

She also noted that both sides had questioned and accepted all jurors at the start of the trial. 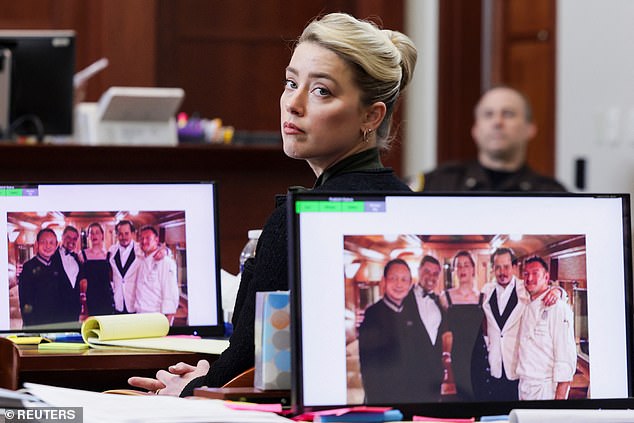 Heard, 36, won just one of her three countersuit claims in the explosive six-week trial earlier this year. The jury awarded her just $2million in compensatory damages out of the $100million she was seeking 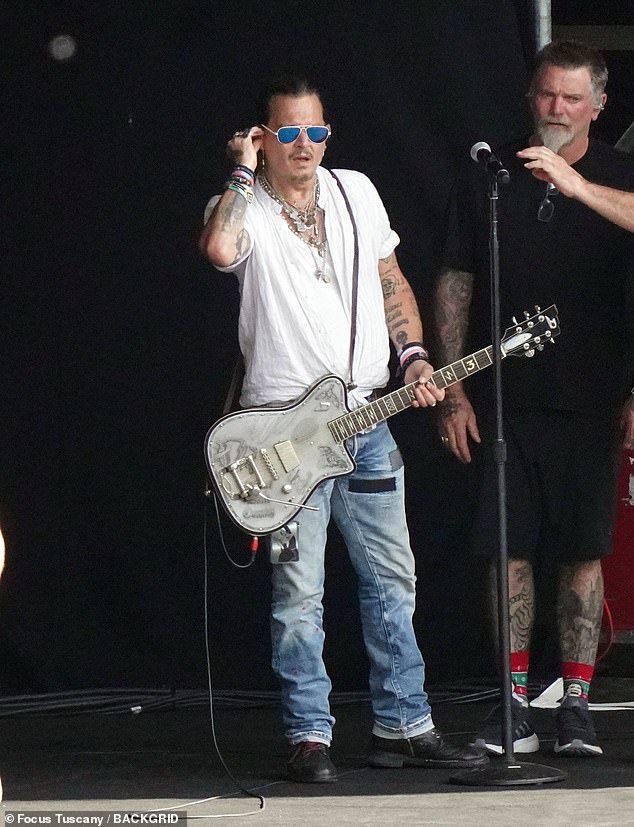 Depp, 59, was awarded $15million in total before the judge capped the damages at the state’s maximum of $350,000 that left him with $8.35million. The actor (pictured at a rehearsal in Italy on Sunday) has been touring with British musician Jeff Beck in Europe since his victory in early June 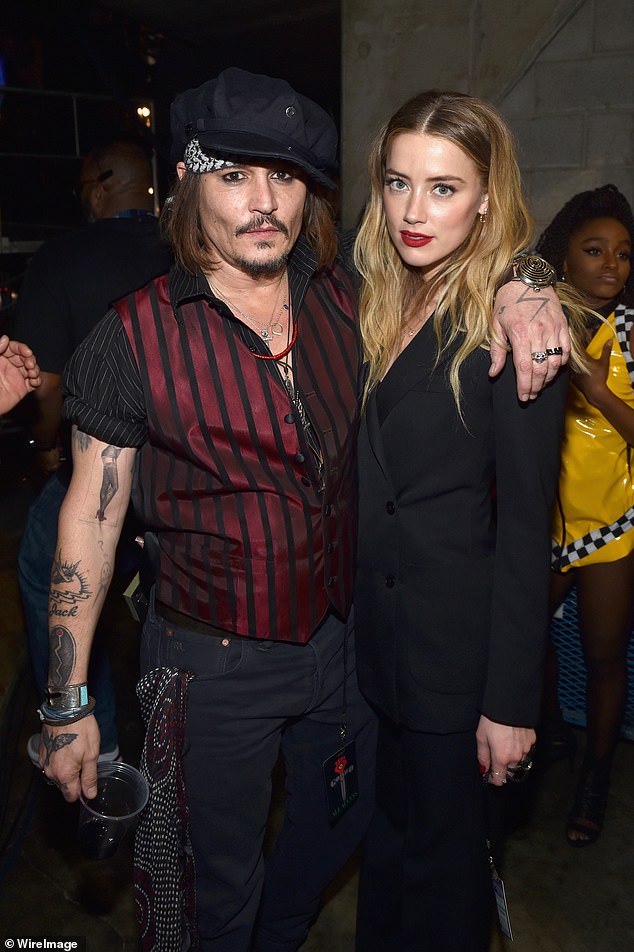 Depp had sued Heard and argued that she defamed him when she called herself ‘a public figure representing domestic abuse’ in a 2018 opinion piece published in The Washington Post. The couple tied the knot in 2015 before splitting a little over a year later

‘Due process was guaranteed and provided to all parties in this litigation,’ Azcarate wrote.

In the 43-page memorandum filed July 1, Heard’s lawyers had also argued that the verdict – and the $10million in damages she now owes Depp – should be tossed out on the grounds that during the trial, Depp ‘proceeded solely on a defamation by implication theory, abandoning any claims that Ms. Heard’s statements were actually false.’

Depp’s lead attorney, Ben Chew, responded to the motion in a statement to Courthouse News, saying ‘What we expected, just longer, no more substantive.’

Heard has also said that she is unable to pay the $10.35million in damages she owes Depp.

Though she has previously indicated that she wants to appeal the verdict, to do so she would need to post bond of the full damages.

It is likely that the motion for a mistrial was an attempt part to circumvent those requirements while still overturning the decision in the case.

The motion cast doubt on the validity of the jury selection process, pointing out a juror – identified as Juror 15 – whose birth year was listed as 1945 in court records. 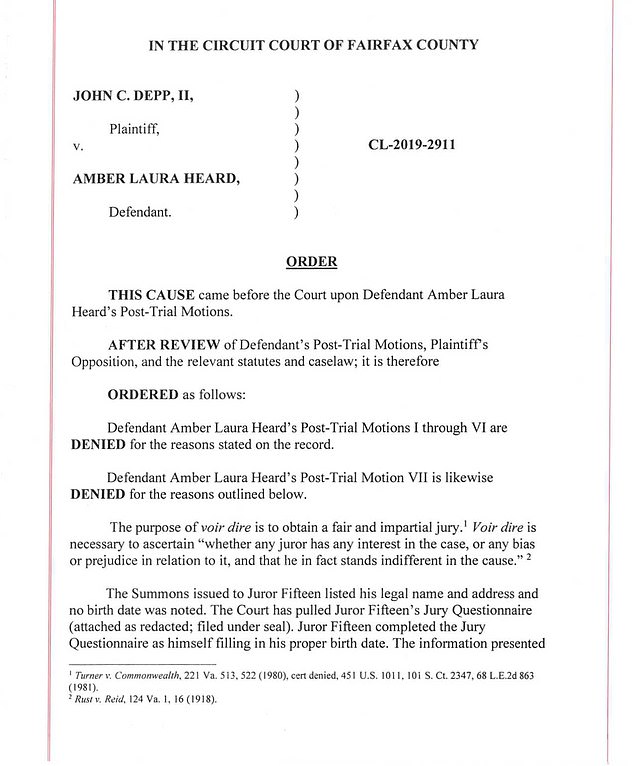 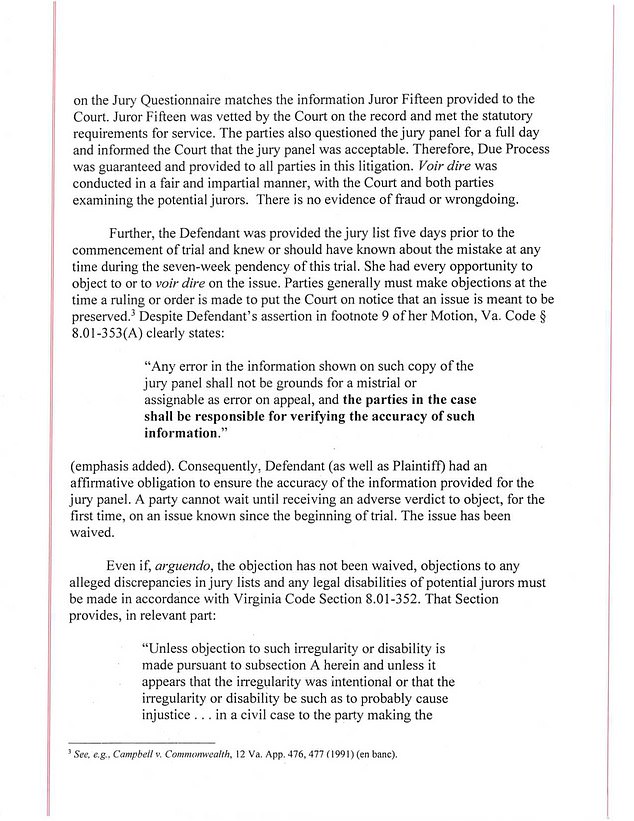 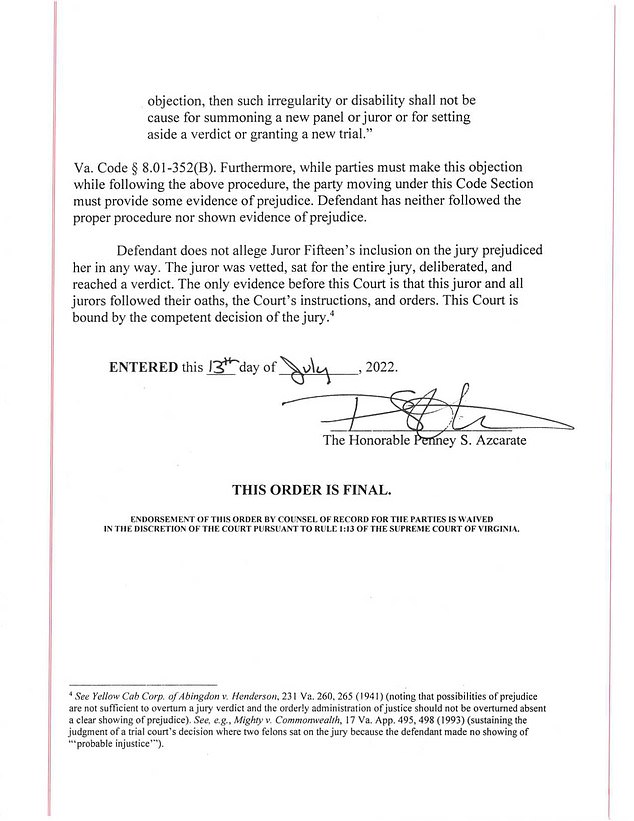 Court documents obtained by DailyMail.com show that Judge Penny Azcarate denied Heard’s motion to have the verdict thrown out

The filing argued that Juror 15 ‘was clearly born later than 1945. Publicly available information demonstrates that he appears to have been born in 1970.’ 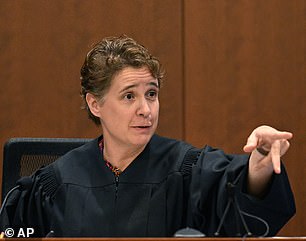 ‘This discrepancy raises the question whether Juror 15 actually received a summons for jury duty and was properly vetted by the court to serve on the jury.’

‘It appears his identity could not have been verified,’ the filing reads.

Depp had sued Heard and argued that she defamed him when she called herself ‘a public figure representing domestic abuse’ in an opinion piece published in The Washington Post.

Depp denied hitting Heard and said she was the one who turned violent in their relationship.

Heard countersued, saying Depp smeared her when his lawyer called her accusations a ‘hoax.’ The jury awarded Heard $2 million in damages on one of her counterclaims. Heard said she only struck Depp in defense of herself or her sister.

During an interview on Good Morning America in June, Chew suggested that Depp might be willing to forgo the millions of dollars in damages owed to him should Heard agree not to proceed with an appeal.

However, Heard’s lawyers lost that chance during the June 24 hearing when they declined to make such an agreement and Azcarate finalized the verdict, leaving Heard’s only path forward in an appeal.

In order to do that though, Heard would still need to come up with the cash to post a bond for the full amount of the $10.35million while the appeal is pending – a common practice.