Amazon is quietly funding a group that bills itself as a grassroots and fights against new federal antitrust legislation.

The Competitiveness Coalition, which is led by former Massachusetts GOP Sen. Scott Brown, has received more than $1 million from the retail giant – three people familiar with its funding told Bloomberg.

The Competitiveness Coalition was funded in part by a $1 million donation from Amazon. Pictured is the group’s call to action

This call to action refers to a bill that has bipartisan support and aims to give federal  antitrust agencies more authority to enforce penalties against firms like Amazon, Alphabet and Meta.

DailyMail.com reached out to Amazon and the coalition for comment.

The Competitiveness Coalition is led by former Republican Senator Scott Brown of Massachusetts. Pictured is the group’s mission statement

The coalition was reportedly spawned by the National Taxpayers Union, a conservative advocacy organization, and it includes other right-leaning groups as members – including Center for Freedom and Prosperity, Taxpayers Protection Alliance and Competitive Enterprise Institute.

This week, the Competitiveness Coalition urged Senate Majority Leader Chuck Schumer to dump the bills ‘in the garbage bin where they belong.’

It also held a briefing with Capitol Hill staff, according to an invitation shared with Bloomberg News. 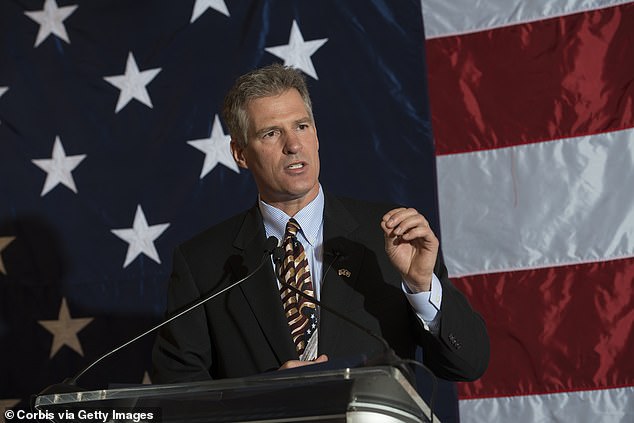 This week, the Competitiveness Coalition urged Senate Majority Leader Chuck Schumer to dump the bills ‘in the garbage bin where they belong.’ Pictured is Scott Brown, former GOP senator from Massachusetts, who currently chairs the coalition

The event was characterized as an opportunity to ‘learn about the dangers of the current antitrust legislation and how it could harm America’s global competitiveness.’

Separately, the group urged House lawmakers to reject the legislation.

Amazon also felt the need to fund at least one group coming from the left side of the political spectrum.

The retail behemoth has recently proposed concessions to settle two antitrust cases against it in the European Union after the bloc passed a strict new digital-competition law.

The European Commission, the bloc’s top competition regulator, on Thursday said it was seeking feedback on commitments offered by Amazon to settle the cases, according to a report in The Wall Street Journal.